Too Aloof, Even for a Cat: Kimpton Ink48 Hotel in New York City 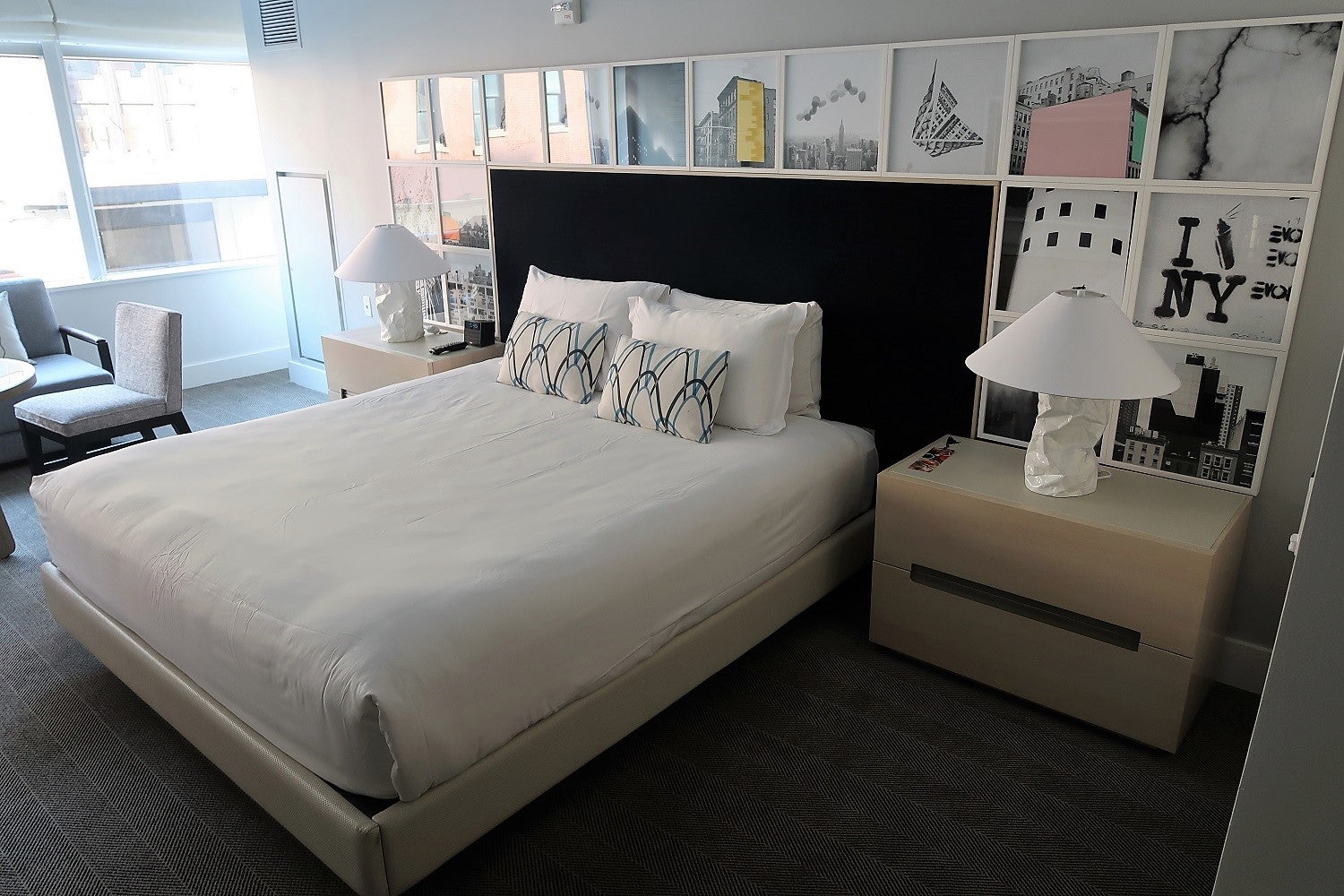 The Point's Guy's digital nomads, JT and Katie Genter, recently took me — Grace the Cat — on my first trip to New York City! After Miles, one of The Points Pups, had such a memorable stay at the Kimpton Hotel Palomar, I was excited to check out one of Kimpton's supposedly pawsome pet-friendly properties for myself.

Kimpton is a formerly independent hotel brand recently acquired by InterContinental Hotel Group that prides itself on being service-oriented and pet-friendly. And "pet-friendly" means more than just allowing pets in rooms: Kimpton's website boasts a list of ways that they "love your pet":

A king room at Kimpton's Ink48 cost 65,000 IHG points per night, and cash rates started around $280 (I didn't know any of this, but I overheard JT and Katie. What with the opposable thumbs and all, they're the ones who use the credit cards.) They said we had a Chase IHG Free Night certificate that was expiring, so we used that to cover our stay, but had we paid cash, it would've cost $321 before taxes and fees.

I arrived at Ink48 after a long Finnair flight from Helsinki (HEL) in Economy Comfort. The check-in agent at Ink48 seemed surprised to see me. He said they'd had many dogs, kangaroos, snakes and horses — they even have stables on site — but he couldn't remember the last domestic cat.

Although I'm an experienced traveler after exploring Europe for the last few months — I even have my own European Union Pet Passport — my parents were still asked to fill out a form promising I'd be well-behaved. At least there wasn't a pet fee.

Although my parents often get upgraded at IHG hotels because of their IHG Platinum Elite status, which comes as a perk of the IHG Rewards Premier Credit Card, they didn't score an upgrade this time. We got instead a second-floor, wheelchair-accessible king room.

Although they were disappointed with the second-floor room, I enjoyed it, as I could sit in the window and watch the world go by below.

The room was much larger than I'd expected for New York City. I had plenty of room to roam and explore.

The king-sized bed had four pillows and two decorative pillows.

There was a table and chairs for my parents and a large couch with two decorative pillows for me.

There was also an extensive minibar that I enjoyed hiding under, especially after I saw the prices. Water cost $6 for a 13.5-ounce bottle and $9 for a 33.8-ounce bottle. It didn't have cat food anyway.

There was a refrigerator in the room, but it was completely full of minibar items — no space for me to chill out.

Next to the minibar was a wheelchair-accessible closet. There were various types of hangers, a safe, yoga mat, luggage rack, an extra pillow and bathrobes.

The bathroom was large because it was also wheelchair-accessible.

I was worried that the roll-in shower would flood my litter box, which my parents set up in the other corner of the bathroom. Luckily, the shower drained well.

With Kimpton being a pet-friendly brand, I'd hoped to see chef-crafted pet treats on offer at check-in or on the room-service menu, but there were none at check-in and only human food was on the menu. Human food from room service didn't come cheap, either, with breakfast ranging from $17 to $28 and dinner from $21 to $49, plus a $6 delivery fee and 19% service charge.

My parents (finally) gave me some alone time when they went to meet friends at the hotel's Press Lounge rooftop bar, which features indoor and outdoor seating with impressive views of New York City. Although the bar was crowded, they managed to find seating shortly before sunset. Their drinks cost much more than my tap water though, with beers starting at $11.50, wines starting at $15 and cocktails costing $21.

Ink48 offered a complimentary, pet-friendly happy hour from 5:00pm to 6:00pm, but we missed it, since we arrived around 5:45pm and they needed to get me settled into the room after a long flight.

Perhaps the most disappointing aspect of my stay was the lack of amenities and lackluster service. When The Points Pup Miles stayed at Kimpton Palomar, he was treated like a king with bowls for food and water, a pet bed, a "Pet in Room" door sign and a treat at check-in. I wasn't offered any of these amenities, even though my parents had listed me on their reservation well before check-in.

Besides acting as a hotel directory and room-service menu, the television in our room also featured pay-per-view movies currently in theaters and free yoga and wellness videos.

The hotel staff was cold to my parents and me throughout much of our stay. When we arrived for check-in, the doorman seemed skeptical that we were indeed staying at Ink48. Staff in the hallways rarely said hello. We've received more caring service and sometimes even pet amenities at much cheaper properties that aren't known for being pet-friendly. Considering Kimpton's pet-friendly, service-oriented brand and its high price tag, we expected more.

My parents noted their disappointment at check-out. The checkout agent gave a seemingly insincere apology and offered an insulting 500 IHG points, which according to TPG's latest valuation was worth $3. There was no manager there my parents could speak with, so the check-out agent wrote down my mom's name and phone number and said a manager would call.

A manager called my mom about seven hours after checkout. He didn't try to excuse our poor experience and instead deeply apologized and offered her a refund of 35,000 IHG points, or the equivalent of $210. My mom seemed to be surprised by the generous offer and said that the manager handled the situation well.

My favorite part of my stay was the window ledge in our second-floor room, as it provided a great vantage point to watch people and traffic. However, considering Kimpton's pet-friendly and service-oriented brand, my parents and I were disappointed to not have any pet amenities provided at check-in. The service was also cold compared to what we've experienced at other properties. My parents and I had high expectations for Kimpton Ink48 because of the brand's reputation, but while the manager's follow-up response was generous, the stay itself didn't live up to the pet-friendly, service-oriented hype. In a word: "hiss."