By the book: A review of American Airlines' A321 in first from Chicago to Miami 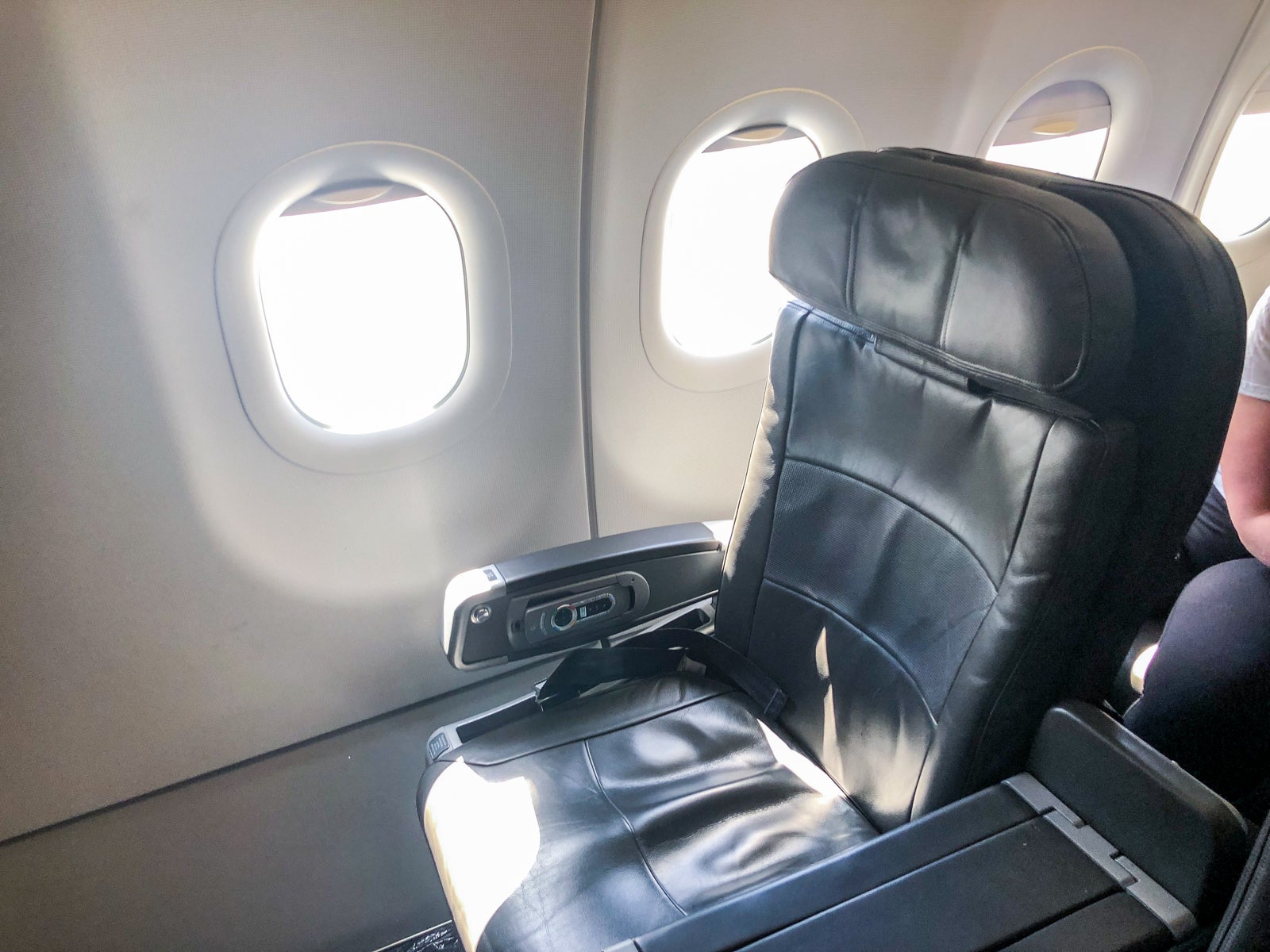 By the book: A review of American Airlines' A321 in first from Chicago to Miami
This post contains references to products from one or more of our advertisers. We may receive compensation when you click on links to those products. Terms apply to the offers listed on this page. For an explanation of our Advertising Policy, visit this page.

A few weeks ago, I got to attend my first TPG reader event as part of the team. The day after that event, held in Chicago, I had to get down to Miami to attend the annual National Association of Black Journalists' conference. I flew up to Chicago from Miami the day before on an American Airlines 737 in economy (yes, it was a long week), but this was my third time ever sitting in domestic first class, so I was excited to see how it compared to the coach experience.

Thanks to my somewhat disappointing economy flight, I boarded this early-morning flight with zero expectations. I ended up being pleasantly surprised.

We booked this ticket as a revenue ticket for $385 one-way and used The Platinum Card® from American Express to take advantage of the 5x bonus on airfare. In total, we earned 1,925 Membership Rewards points, worth about $39 according to TPG's current valuations.

It's entirely possible to find award redemptions on this route, just make sure to select "nonstop only" when searching American's website. I was able to find MileSAAver award availability for sample dates in November for 25,000 miles, and First AAnytime space from 45,000 to a whopping 75,000 miles.

My day started with a 5:15 am Uber from my hotel, W Chicago – City Center, to the airport.

I was greeted with a nearly empty airport, and as I didn't need to check a bag, I headed through security and straight to the gate. It was still early, and while the gate was crowded, it was quiet and orderly.

My gate, K19, was located in Terminal 3. The terminal featured several quick-eat stops like McDonalds and Starbucks, but is also home to American's Flagship Lounge, located in the crosswalk between gates H6 and K6.

Because I wasn't a qualifying passenger, I gazed longingly at the entrance before moving on.

After arriving at the gate, I snuck a glimpse of the plane I'd be flying that day; an Airbus A321 delivered to American in April 2017.

There weren't many people lining up before their gates were called, which was a relief. The gate agent spent a few minutes rechecking the passports of several passengers who likely had connections in Miami.

After the lone Concierge Key member pre-boarded, Group 1 boarded promptly at 6:31 am.Some stragglers held up the boarding process, but we pushed back and were off after a slight delay.

The first-class cabin on this aircraft was arranged in a 2-2 configuration with one lavatory at the front of the cabin. As I had the bulkhead seat, I was able to stretch out during the flight comfortably.

Though the seat looked a little worn, it was comfy, and I didn't feel like I was sinking. The armrest was ample enough for my fellow passenger and me not to feel like we were awkwardly bumping elbows.

And, also because I was in the bulkhead, the IFE screen was mounted on the wall in front of me rather than in a seatback.

It's not quite as good as having a seatback monitor in front of you, but I was just glad it was there, as the Airbus A321 is another plane type in AA's fleet that's undergoing Project Oasis, which will remove all of the personal IFE screens, same as is happening with AA's Boeing 737-800s.

The dedicated first-class lavatory was well-stocked, though very tight. There were no amenities like you would see on an international business- or first-class flight, but it was kept clean throughout the flight, which I appreciated.

I was greeted at my seat with a blanket wrapped in plastic. AA does not provide pillows to passengers in domestic first class..

As a longtime T-Mobile account holder, I get one free hour of in-flight Wi-Fi, unlimited texting through internet-based messaging services such as iMessage or WhatsApp, picture messaging and T-Mobile Visual Voicemail on any flight that’s equipped with Gogo’s in-flight Wi-Fi service.

Thanks to that, if I can avoid having actually to pay for internet I will. After reaching cruising altitude, I hoped to be able to connect. Unfortunately for me, Gogo wasn't enabled on this flight.

Because I wanted to text friends to meet up after landing in Miami, I opted to pay for internet which cost $10. I paid using the Barclaycard AAdvantage Aviator Red World Elite Mastercard. Using this card, I can get $25 back as statement credits on inflight Wi-Fi purchases on American Airlines-operated flights, every card anniversary year.

I don't watch much television on the ground or in the air, but I noticed the passenger beside me struggle to operate the IFE to watch a movie. After fiddling with it for a few minutes, she called the lead flight attendant over to help figure it out. Unfortunately for her, the flight attendant seemed unsure about how it worked as well, and the two spent a few minutes turning the IFE on and off until the movie finally appeared.

The seat did provide both USB and AC power, which is something that definitely should be there, but I appreciated it nevertheless.

After taking my seat, the lead flight attendant came by and took pre-departure drink orders. While I'm not above ordering sparkling wine, I needed to hit the ground running upon returning to Miami immediately, so I opted for orange juice.

The flight attendant returned shortly with my orange juice in a plastic cup.

The juice was exactly what I needed. I was feeling a little dehydrated, so the cold and refreshing juice really hit the spot.
About 45 minutes after takeoff, the flight attendant came by to take breakfast orders. I could choose between oatmeal or eggs Benedict. I was starving, and remembering my breakfast experience on the flight to Chicago, also wary. I ended up choosing the oatmeal which came with a refreshing fruit platter, and I drank water with it.
The oatmeal was bland without the brown sugar, but after topping it off with the raisins and shaved coconut and brown sugar, I was pleased. It was thick, which is how I prefer my oatmeal, as opposed to runny.

Midway through the meal, the flight attendant came by with warm croissants in a basket, and just before landing, first-class passengers were given mints along with a "thank you" for flying AA.

Shortly after takeoff, I was given a refreshing hot towel which helped wake me up from my early rising.

While meal service was prompt and the cabin crew was attentive to the needs of the passengers, there was a lot of chatter from the flight attendants in the galley.

Usually, this is something I wouldn't mind, but as it was such an early flight, I would have preferred light chatter or none at all.

Just before takeoff, the captain came on the intercom with (what he thought) was a funny reminder to keep seatbelts fastened because several passengers apparently hit their heads on a flight a few weeks before.

I found the comment odd and somewhat dark, and I wasn't the only one. Shortly before disembarking, my seatmate turned to me and mentioned how unnecessary the remark was.

I found the overall product to be just about average. Not perfect, not great, but good.

While the flight attendants were chatty and the captain liked to make jokes, the service more than made up for it. The plane was fairly new and the seat and legroom were more than enough for my 5'8'' frame. The first-class cabin was completely full, but I felt well taken care of, and I definitely wouldn't mind giving domestic first class on American another go.

Featured image by (Photo by Victoria Walker / The Points Guy)