Wish I’d gone to Wendy’s: A review of American Airlines’ economy on the 737 from Miami to Chicago 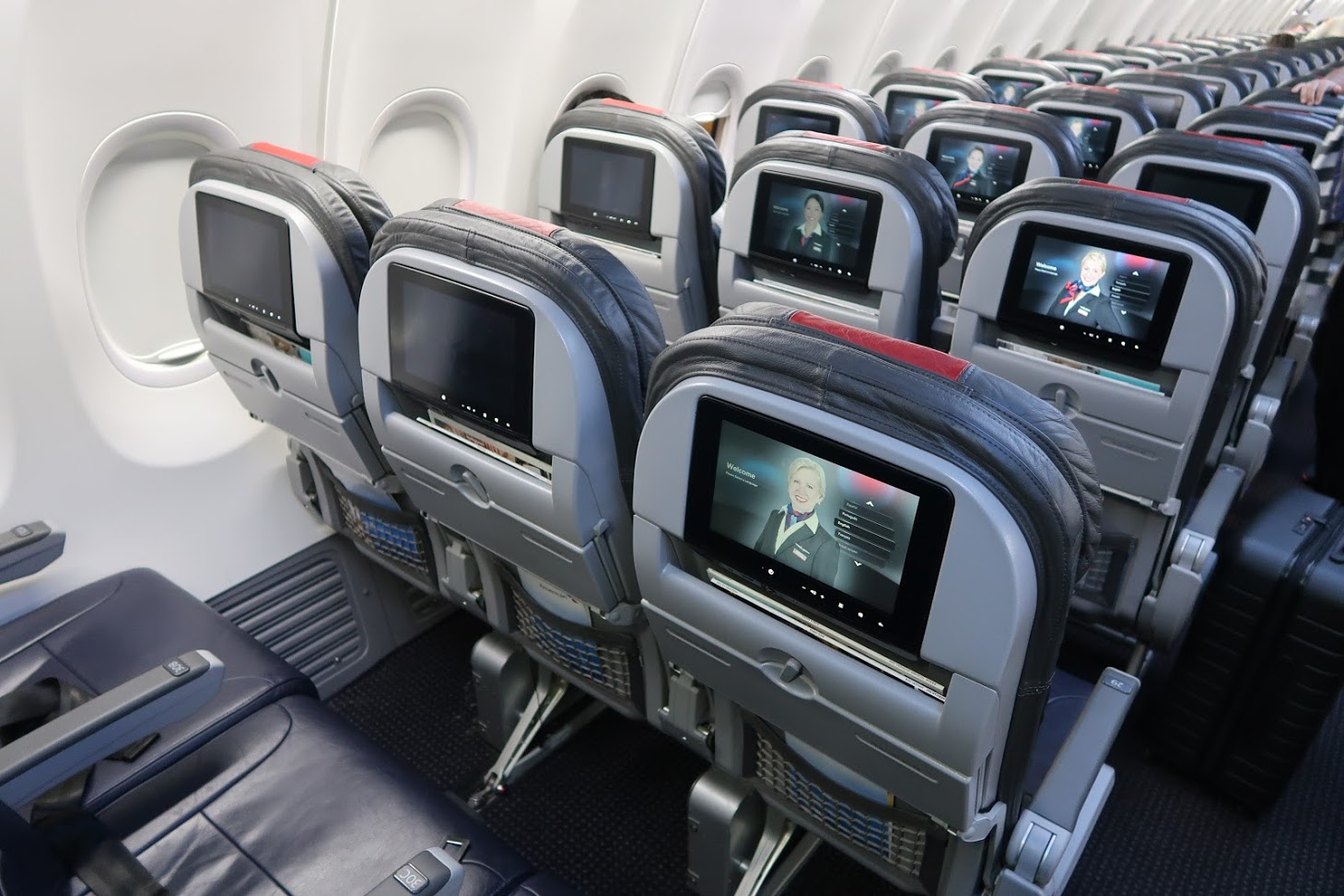 Wish I’d gone to Wendy’s: A review of American Airlines’ economy on the 737 from Miami to Chicago
This post contains references to products from one or more of our advertisers. We may receive compensation when you click on links to those products. Terms apply to the offers listed on this page. For an explanation of our Advertising Policy, visit this page.

The majority of passengers travel in economy and, here at TPG, we are no exception. A few weeks ago, I was in the Miami area for the National Association of Black Journalists annual conference. It was a last-minute trip, as I was up for an award, but I'd also agreed to take part in TPG's reader event in Chicago later that week.

I'd flown in from New York-JFK to Fort Lauderdale (FLL) but needed to fly out of Miami (MIA) to get to Chicago (ORD).

I'm most loyal to American, having lived near Washington Reagan (DCA) before moving to New York, but I hadn't flown AA in a while. I was eager to see how the economy on American stacked up against Delta, which I'd been flying a lot more lately.

American Airlines is currently updating its domestic fleet, in good ways and bad. The airline has retrofitted more than 600 aircraft with high-speed Wi-Fi. A downside, however, is that it's also retrofitting the interiors of some with more seats, which means less legroom.

If you’re flying economy on this route, it's entirely possible to find cheaper tickets or use points and miles to get the best deal. If flying American, you can snag a MileSAAver economy flight from Miami to Chicago for 12,500 AAdvantage miles one-way.

I arrived at Miami International Airport promptly at 7:50 a.m., after taking an Uber from my hotel in Hollywood Beach. For such a large airport, it was relatively quiet, with just a few families milling around looking for check-in gates.

The standard security line was pretty long for those without TSA PreCheck. Because I had PreCheck, I was in and out of security in less than three minutes and headed toward my gate, D26.

As a holder of both the Platinum Card® from American Express and the Business Platinum Card® from American Express, I had access to the Centurion Lounge, which received a refresh earlier this year. I was unable to visit, as I was running a bit behind because of traffic between Hollywood Beach and Miami. Keep in mind that as of March 22, Platinum cardmembers will only be able to enter the lounge with a boarding pass for a flight departing within three hours, though Centurion members will continue to have unrestricted access.

After clearing security, I headed straight to the gate, which was completely crowded but not disorganized. I was unable to find free seats, however, as all were either occupied by people or luggage.

I was certain that this would be a full flight, and the gate agent confirmed my suspicions by repeatedly looking for volunteers -- particularly in Group 9 -- to check their bags.

After several people volunteered to have their bags checked, Group 1 began boarding at 8:08 a.m. Despite some people lining up before their groups were called, there wasn't a massive case of gate lice, and boarding commenced smoothly. The scheduled departure time was 8:40 a.m., and we pushed back at 8:34 a.m. There was some traffic ahead of us, but we took off at 8:47 a.m.

The plane was a newer Boeing 737-800 that had been in service for about two years.

I found that there was plenty of space underneath my seat for my carry-on backpack, and my 5-foot, 8-inch frame didn't feel cramped during the flight.

The seat was leather, which I prefer, though not the most comfortable economy seat I'd been in. I was pleased, however, to find out that the seat (and the area around me) was kept clean. Each seat had access to a USB port and an AC power outlet.

One thing I didn't enjoy was the uneven cabin temperature during the flight. I actually prefer a warmer-than-normal cabin, as I hate being cold, but the cabin didn't seem to maintain a consistent temperature. From boarding to takeoff, the cabin temperature was so warm that I took off my hoodie. After we got in the air, the air conditioning kicked in and had me digging through my backpack for my hoodie again.

The cabin was kept pretty dark throughout the flight, as most passengers kept their window shades closed during the flight. I didn't mind this, since it was still early and I was groggy from my early wake-up.

My laptop fit on the tray table with enough room to get work done and not feel like I was bumping the passenger beside me.

The lavatory was basic but kept clean throughout the flight.

There was a healthy mix of movies and TV shows, including programs like "Amsterdam" and "The In-Between" that were exclusively offered on American flights. I don't watch much TV on flights, but I appreciated the options.

Midway through the flight, the entertainment cut out for about five minutes with an odd message on a black screen.

This malfunction also caused the power outlets to go out, and we received no communication from the flight attendants about what happened.

Because I was working remote from Miami during the conference, I'd hoped to use the short flight to catch up on emails and other work. I turned on my Wi-Fi, expecting to connect quickly and ... nothing.

I gave it a few minutes, and still nothing. I tried again about halfway through the flight with no luck.

No Wi-Fi in flight is a deal breaker for me. Like I said, I don't watch much TV or movies on planes (or in general), but I use Wi-Fi to listen to Spotify playlists and text friends and family during the flight. Not being able to do any of this, or get any work done, was a significant drawback, and was sure to be disappointing to others traveling for work who were expecting to cross some items off their to-do lists.

While this particular aircraft was equipped with a seatback IFE screen loaded with content, as part of the airline's Project Oasis retrofit program, these screens will be taken out, and in its place will be a personal device holder coupled with streaming entertainment.

The flight attendants came by shortly after we reached cruising altitude and asked for drink and snack preferences. Because it was still early and I was slightly dehydrated, I got water without ice instead of my usual orange juice or black coffee.The flight attendant asked if I wanted to purchase a meal, and as I'd skipped breakfast, I was famished. After my meal, I wish I'd waited until landing or just gone hungry.

I ordered the breakfast platter, which came with green apple slices, a hardboiled egg, a slice of American cheese, grapes and a muesli scone.While the apples and grapes were fresh, which was a relief, the scone was stale and the hardboiled egg inedible.

Overall, I found the breakfast platter underwhelming and not worth the $9 price tag, as I was still hungry by the time the plane landed.I paid using the Barclaycard AAdvantage Aviator Red World Elite Mastercard. This card is probably best known for its sizable sign-up bonus (currently 60,000 AAdvantage miles) you can earn after making just one purchase in the first 90 days. We value AA miles at 1.4 cents each, according to TPG's latest valuations, making the welcome bonus worth $840.

The flight attendants weren't the warmest, but they were attentive and answered questions I had about the snack menu and remembered my preference for water without ice.

They ensured that the economy cabin remained clean throughout the flight by coming through and picking up trash and leftover food items.

Overall, it was a rather uneventful flight. The service was on par with what I'd expect for an economy flight like this. I appreciated the seamless boarding process and early landing.

But I walked away wishing I'd stopped at the Wendy's at Miami Airport before the flight, as the food on board was mostly inedible and expensive. Not being able to get work done because of the Wi-Fi was also a huge drawback. If you're the type of person who likes to sleep on shorter flights, the lack of edible food and Wi-Fi probably won't bother you much. Otherwise, I'd suggest economy class on another airline.

Related stories
Last chance: Earn 75,000 Rapid Rewards points with these Southwest card offers
Quick Points: Triple stack these offers to maximize your next Lyft ride
Everything you want to know about cabins and suites on Carnival Cruise Line ships
Delta does it again, adds used planes to its fleet without retrofits
Editorial disclaimer: Opinions expressed here are the author’s alone, not those of any bank, credit card issuer, airline or hotel chain, and have not been reviewed, approved or otherwise endorsed by any of these entities.