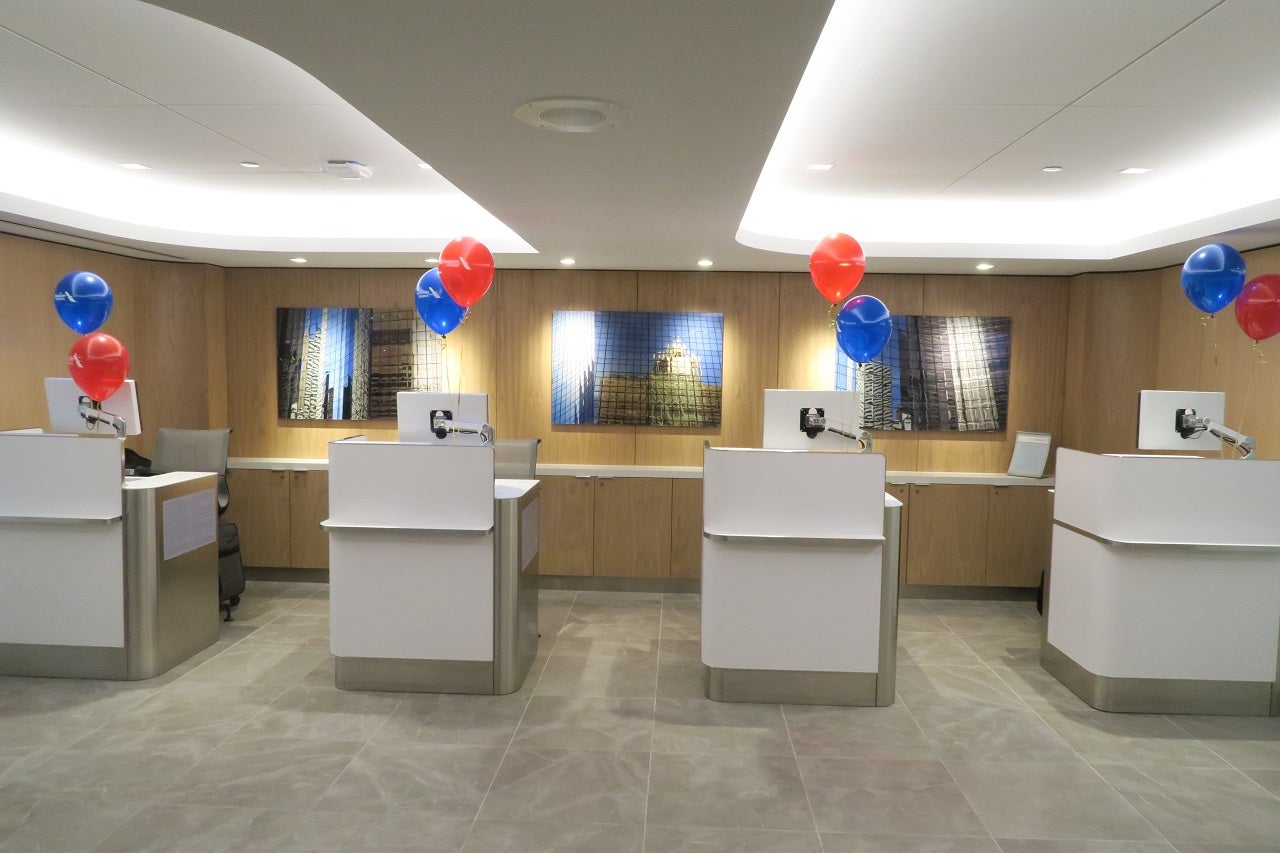 American Airlines is in the midst of a massive investment in new premium products. From retrofitting its fleet with top-notch business class seats to leading US carriers in installing premium economy to lounge renovations — some of which haven't gone so smoothly — the airline is trying to make its premium offerings top among US carriers. While AA's operations still have some way to go to catch up with Delta, at least you'll be able to wait for your flight's gate to open up in a nice seat or wait out a delay in a sharp new lounge.

Part of this investment is in a new series of Flagship Lounges. The first of these opened in New York City's JFK in May. The second lounge is opening Thursday at 3:30am in Chicago's O'Hare airport (ORD). And, I was lucky enough to be one of the special invitees to American Airlines' pre-opening party. Here's a look around inside the brand new lounge.

The ORD Flagship Lounge is located in the center of AA operations in between concourses H and K. There's an existing Admirals Club on the third floor, and this Flagship Lounge takes the place of an old conference center on the second floor.

To access the lounge, enter at the check-in desks on the first floor. If you're a Concierge Key, flying business class intercontinental, or an AAdvantage elite on a qualifying flight, you'll get a special invitation card and directed to take the elevator to the second floor.

On the way to the elevators, you'll get a quick preview of the experience via banner:

On the second floor, the elevator doors open to the Flagship Lounge entrance. For now, this is where you'll hand over your invitation card. However, American Airlines is working on better digital solutions to this access issue. Soon, the airline is hoping to print a barcode that agents will print at the check-in desk and agents on the second floor will scan to allow entrance. The eventual solution is to encode the access policy into traveler's boarding passes, which agents will scan at this entrance.

Inside and to the right, there are four kiosks for agents to assist travelers.

Inside, the first impressive thing about the lounge is its sheer size. At 17,000 square feet, it's four times larger than the existing "International First Class Lounge" at the end of the K concourse pier. This lounge — set to close permanently Wednesday night — is so small that it's specifically targeted to international first class passengers, in an airport that doesn't have international first class operations.

Thankfully, there's no lack of space in the new Flagship Lounge, including a variety of seating areas arranged into a series of semi-separated rooms:

On the other side of the lounge from the food and dining area, there are some seating areas that include coffee and non-alcoholic drink selections:

Including some window-side counters where you can enjoy the views of AA's busy operations:

Speaking of views, AvGeeks will love spending a long layover here — especially if you're a fan of the new American Airlines livery.

For those sick of planes, there's a mini-theater set-up with a couple of not-very-large TVs.

If you're looking for a quiet area, there are two in the lounge. One with seats:

... and one with five lounge chairs. Unfortunately, both of these rooms are open-air. There are no doors to block out the noise from the rest of the lounge, and there aren't even solid walls. This seemed like a very peculiar design, so I asked about it at the pre-opening party. Maureen Joza, Manager ORD Premium Services, explained that it's due to fire code regulations. So, make sure to bring an eye mask and earplugs if you're hoping to catch some shut-eye.

Everywhere I looked, I was pleased to see numerous power outlets. It doesn't seem like you're going to have to battle for a plug like in the Admirals Club immediately above you.

The ORD Flagship Lounge includes a large dining area with an incredible spread of food across rows and rows of trays:

One could make an entire meal out of the sushi, as I pretty much did for the party.

While most of the food was self-service, there was one station with a friendly lounge attendant serving "Chicago Style Italian Beef Sandwiches":

While the sandwich looked delicious, the "fresh au jus" didn't mesh well with the roll, creating a messy experience when trying to enjoy the sandwich. I needed to resort to a fork to finish it off... but at least it was tasty.

Once you get your food, the dining area has a series of mostly two-top tables for passengers to sit and eat.

Like much of the food, all drinks were self-service. The far wall of the dining room contains the main bar with a wide selection of solid-quality liquors.

More toward the dining tables, there's a wine bar. This served as a backdrop for much of the festivities Tuesday night, including a welcome from the Flagship Lounge's own sommelier, who provided an introduction to the wide-ranging wines. We toasted the new lounge with the free-flowing Bollinger champagne.

On the far side of the lounge, there's a mini-bar with pre-mixed BTL SVC branded Manhattan and Ginger Buck bottles.

These are complemented with various garnishments and served alongside jars of candies.

The bathrooms were sharp, but nothing distinguished it from renovated Admirals Club bathrooms besides a pair of bright red roses to add some brilliant color to an otherwise achromatic bathroom.

However, for such a large lounge, I was surprised to see just one set of small bathrooms. If the lounge ends up crowded, there might be a wait. If the line for the bathrooms gets long, you can check to see if a shower is open. The lounge includes six large rooms including a shower, sink and toilet.

If you're impressed by the look but not planning on flying through JFK or ORD anytime soon, the good news is that American Airlines says it will finish both the Los Angeles (LAX) and Miami (MIA) Flagship Lounges before the end of 2017. While MIA was on track to finish well ahead of LAX, Hurricane Irma equalized the race a bit. And in 2018, American Airlines will open Flagship Lounges in Dallas / Fort Worth (DFW), London Heathrow (LHR) and Philadelphia (PHL).

Will you be able to visit the ORD Flagship Lounge anytime soon?