Where to Sit When Flying United’s New 777-200: Economy and Economy Plus 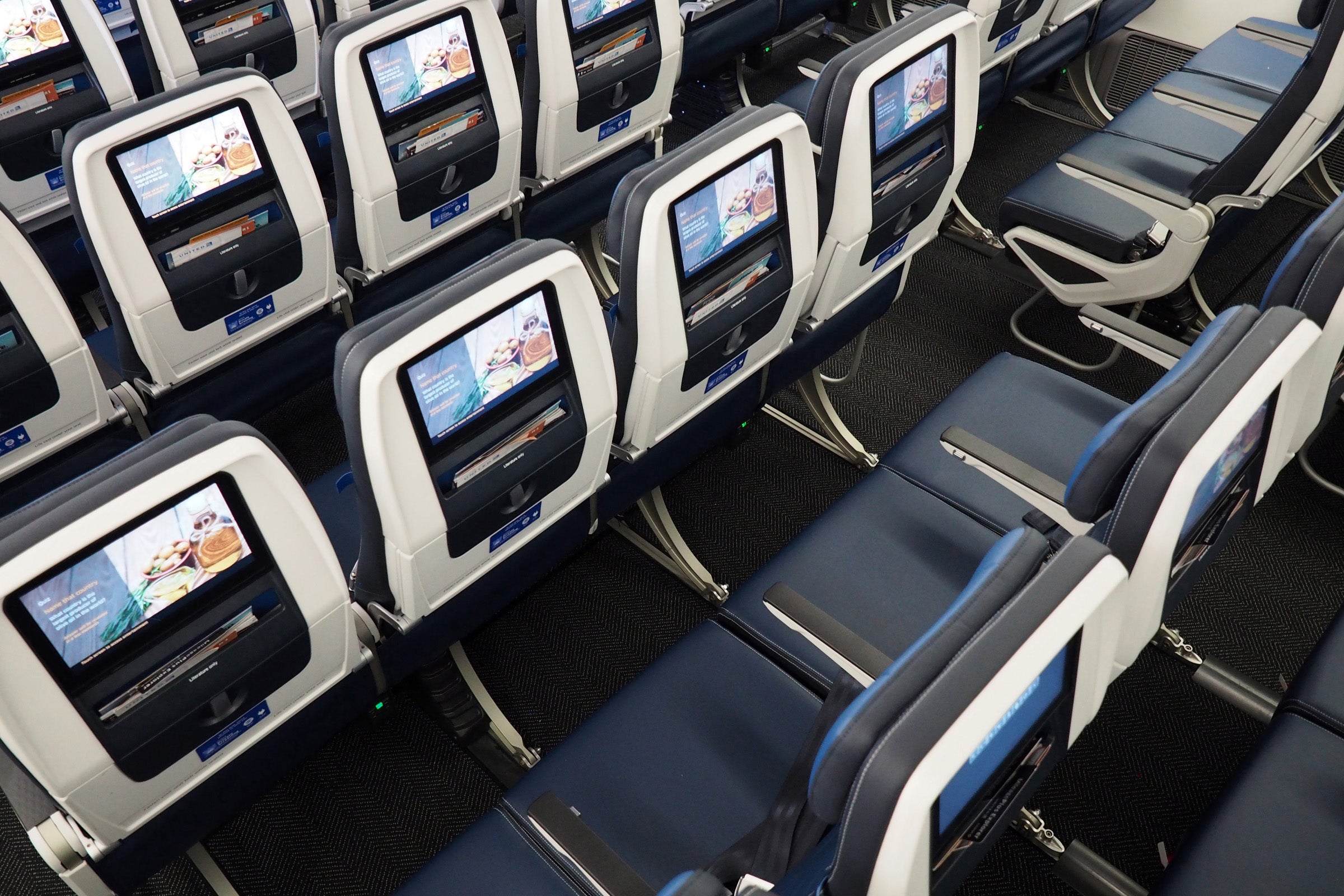 Unlike up in Polaris biz, where the seats are physically identical to those on the 777-300ER, United selected an entirely new product for economy class in its 777-200.

The new seat, manufactured by Rockwell Collins, is called Aspire, and will eventually be used on United's 787-10 Dreamliners, along with Airbus A350s and 787s headed to other carriers.

Aspire isn't a complete reinvention of the economy seat, of course — the design is very similar to recent models, including those on the United 777-300ER (77W) — but according to UA these are a bit wider, at 17.25 inches compared to 17.05 on the 77W.

Most economy seats are arranged in a 3-4-3 configuration, although there are five paired seats, as outlined below.

Each seat offers on-demand entertainment and a USB charging port, and there's at least one universal power outlet for every two seats throughout the cabin.

United's retrofitted 777-200s sport a total of 242 economy seats, compared with 221 prior to their update. Most of those additional seats come from a jump from a 3-3-3 arrangement, with up to 18.1-inch seat width, to 3-4-3 with a width of 17.25 inches. That's a noticeable decline, especially when it comes to shoulder space.

There are also far fewer Economy Plus seats — 80 on the new version, compared with a whopping 113 on the previous configuration. Economy Plus seat pitch remains at a respectable 34 inches. The retrofitted plane has 162 regular coach seats as well, with 31 inches of pitch.

While squeezing into 3-4-3 coach on a 777 is nobody's idea of a good time — except perhaps for one TPG contributor — there are actually a few seats on this plane that you might be able to tolerate, even on a 16-hour flight from the East Coast to Asia.

Even better, though, is Row 40, just behind Door 3. You'll have a ton of space on both sides, but the port seats offer even more legroom — 40A and 40C are big winners in my book.

40K and 40L on the starboard side are fantastic options, too, though do keep in mind that it may get a bit chilly near the exits, especially during a long-haul flight.

You're probably not going to believe this, but even as an elite member able to select Economy Plus for free, if traveling with just one companion I might skip the extra legroom in favor of 38A and 38B, the only paired seats in the forward coach cabin.

You'll get a bit more recline in Row 51, and you'll be an extra couple feet away from the lavatories and galley, located just behind 52.

If you can't get one of the paired seats, I'd opt for an aisle or window elsewhere in the cabin.

Any in the middle — duh!

More specifically, I'd first avoid E and F center seats, followed by B and K seats on the port and starboard sides, respectively. Do keep in mind that aisle seats in the five paired sets mentioned above are designated B and K as well, but those obviously only have a seat on either the left or right side.

I'd also avoid all of the seats in Row 53, since they're located directly in front of the rear galley and lavatories, not to mention the fact that they offer incredibly limited recline.

I could maybe see picking this row if I were the only occupant, perhaps, both otherwise there isn't any reason to sit all the way in the back.

While United's new 3-4-3 seats look and feel decent, you're losing nearly an inch of width over the previous version — if given a choice between this fresh retrofit and the older three-cabin 777-200, I'd choose the previous configuration any day.

Currently, there's just one plane flying with this new arrangement — N786UA — and it's a bit of a moving target. In the past week, it's been flying between San Francisco (SFO) or Washington, DC (IAD) and Frankfurt (FRA) or London (LHR), depending on the day. United's committed to adding a Polaris-equipped plane every 10 days through 2020, though, so you'll see these start popping up much more often soon.

Related stories
How to use your credit card points to donate to charities this Giving Tuesday
How to get free or cheap drinks on a cruise
Carnival Celebration: What we loved and what needs work on Carnival's newest, biggest ship
Earn bonus points on paid stays with IHG's Cyber Monday promotion