Where is Virgin Atlantic parking its planes during the coronavirus outbreak?

Articles
Emily McNutt is The Points Guy's Global News Editor and is based in London.
Follow
March 24, 2020
•
6 min read 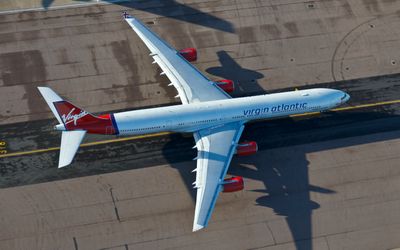 In both cases, airlines have been forced with the question of what to do with the aircraft that they don't plan on using for an extended period of time. For British Airways, that means parking some of its long-haul aircraft at airports like London Heathrow (LHR), Glasgow (GLA), Cardiff (CWL) and even Manila (MNL). Meanwhile, its narrow-bodies are at Madrid (MAD) and Glasgow (GLA), among others.

But what about Virgin Atlantic. According to Planespotters.net, the U.K. carrier has 45 aircraft in its fleet — considerably smaller than BA. However, given that all of its fleet are wide-body aircraft that take up a considerable amount of space.

Earlier this month, Virgin Atlantic CEO Shai Weiss announced that at some points in April, it would be grounding up to 85% of its fleet at a time. Based on the fact that the airline has 45 aircraft in its fleet, that means that at times during April, it will only have six aircraft operating.

That's significantly reduced. But where is it storing those aircraft?

While Virgin isn't completely cutting its operations and storing 85% of its aircraft yet, it has taken to already storing some of its older, larger and less fuel-efficient aircraft for the time being. Likely, as the weeks go on, the airline will be forced to park more of its birds in order to accommodate the drastic decrease in demand.

Sign up for the free daily TPG U.K. newsletter for more airline news.

Let's take a look at where Virgin is storing its aircraft so far.

According to our research, all four of its A330-200s are already stored. Three of them (G-VLNM, G-VMNK and G-VWND) are already stored at Doncaster Sheffield Airport (DSA). While G-VMNK and G-VWND both made the flight from London Gatwick to DSA, G-VLNM took the short hop from Manchester (MAN) to DSA — a 53-mile journey that took just 22 minutes, according to FlightRadar24.

One other A333 — G-VUFO — flew back to London Gatwick and landed on 24 March after completing a series of repatriation flights. According to flight-tracking website FlightRadar24, the aircraft flew from London Gatwick to Vieux Fort, St Lucia (UVF), before continuing on to Point Salines, Grenada (GND), back to UVF and then returning to LGW.

The airline has long been talking about retiring its ageing fleet of Airbus A340s. Before the coronavirus crisis, the airline only had three of the aircraft left in its fleet, with plans to retire them fully within the next few months.

Unfortunately for the aircraft and AvGeeks, the coronavirus has accelerated those retirement plans. As of Tuesday morning, all three of the A340s left in Virgin's fleet — G-VFIT, G--VNAP and G-VWIN — were all shuttled from Glasgow Prestwick Airport (PIK) to Bournemouth (BOU).

It's unclear if Virgin is storing them temporarily or permanently retiring these A340s. Requests for comment to Virgin Atlantic went unanswered.

From the airline's oldest to the newest. While the A340s are all being stored away at this time, the four A350s in Virgin Atlantic's fleet are all still operating.

This shouldn't be too surprising. Not only are these the newest and some of the most fuel-efficient aircraft in Virgin's fleet, but they also are placed predominantly on the popular route between London and New York (JFK), which Virgin appears to be continuing even during the coronavirus crisis.

The other old birds in Virgin's fleet come in the form of its superjumbo Boeing 747s. While the airline still has seven Boeing 747s in its fleet, it appears as though five of them have already been parked.

Of the five of them, two — G-VGAL and G-VLIP — are parked at Manchester (MAN). Two others — G-VROS and G-VROY — haven't officially been marked as stored, however, they have not operated a commercial flight since 22 March and 21 March, respectively, and are currently at London Gatwick (LGW).

G-VXLG is the lone Virgin 747 parked at Glasgow (GLA) and at nearly 22 years old, it's one of the oldest aircraft in Virgin's fleet. It's unclear if the 747s that are parked are permanently there or just during the coronavirus crisis.

The last member of Virgin's fleet, the Boeing 787 Dreamliner, has already faced a similar fate to the rest of the fleet. In total, Virgin has 17 787-9 aircraft. Of such, 10 appear to have been cut from operating commercial flights. While two have been out of service for quite some time — G-VNYL and G-VOOH — the others haven't flown in the past few days, at least since 22 March.

All 10 of the 789s are currently parked at London Heathrow (LHR).

Like with all other carriers, it remains to be seen exactly how long these aircraft will have to be parked for. As Virgin continues to cope with the losses as a result of the coronavirus crisis, it's likely that may be for a while.