Articles
Clint Henderson is the managing editor for news at TPG. He worked in TV news for 20 years, including stints at ABC, MSNBC and Fox, before landing his dream job. Send tips to Clint.Henderson@thepointsguy.com.
Follow
Oct. 11, 2021
•
8 min read 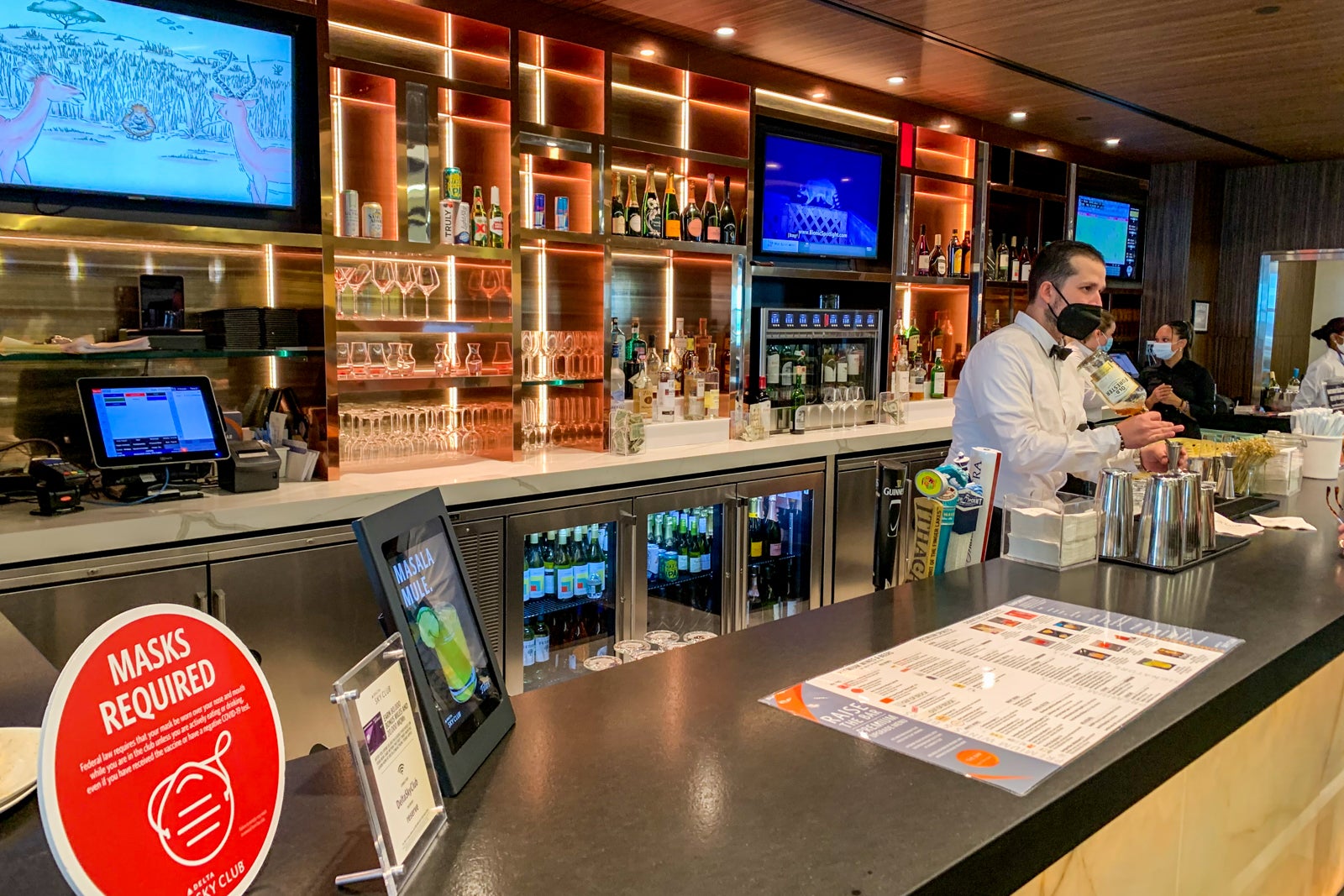 A recent trip to the Delta lounge at New York’s JFK airport had a pleasant surprise in store for TPG’s executive editor Scott Mayerowitz: a full buffet, including paella. That’s right, food is coming back to your favorite lounges. It’s not quite to pre-pandemic levels everywhere, but the offerings are improving.

Mayerowitz’s experience inspired us to quiz other TPG members about current lounge offerings. Overall, it’s hit and miss, but the trend is very positive.

New to The Points Guy? Sign up for our daily newsletter and check out our beginner’s guide.

Good news for Delta flyers, all Sky Club locations are now open again. On that recent trip to JFK I mentioned, a sign declaring “fresh food buffets are back” greeted Mayerowitz.

Indeed, he found full buffets are available again, even including a paella station. As you can see below, there were hot soups and cheese cubes, which are pretty standard fare. But there were also fresh make-your-own salads, pasta salad, clams, pasta primavera, orecchiette pasta and much more. For desert? Biscotti or brownies.

As we reported in May 2020, food options had been really cut back in the age of COVID-19. That’s all changed now. I can confirm because I was pleasantly surprised on a recent trip through Salt Lake City: The glorious new Sky Club in the new Salt Lake City terminal (it includes a Sky Deck) was also again serving hot serve-yourself food. In fact, I kind of missed being able to get some grab-and-go items to take with me.

I would say Sky Club offerings are now on par with what they were pre-pandemic.

Good news on American Airlines. The airline says it has now reopened all of its domestic Admirals Clubs. TPG senior writer Zach Griff was in one of the Miami AA Admiral’s clubs recently. He said it definitely was similar to pre-pandemic offerings. Griff says he actually liked a few of the changes saying there were a “.. bit more unique elements, like a create your own mezze plate.”

Most AA lounges will have cheese cubes, hummus, hard-boiled eggs and fruit. Many also now have self-serve soups again.

And Griff pointed out that one of the AA lounge favorites was back: the guacamole station. You can have avocado toast in the morning and guacamole, salsa and chips in the afternoon. (Don’t forget to leave a tip.)

The Admirals Club was also back to selling other meals. Below is a look at the current menu and prices.

Red Ventures director of social media Sophia Fen told me her boyfriend was just at ORD (Chicago) on Monday in the Admirals Club.

Note also, as we’ve reported, the Flagship lounges are also back. American has brought in new chefs and a ton of options kicking off with the reopened Flagship lounge at New York-JFK last month.

Zach tried the roasted squash with a side of zaalouk as an appetizer and the signature roasted cauliflower dish.

The Flagship Miami (MIA) lounge reopened on Sept. 28th. The Flagship lounges in Chicago (ORD), Dallas-Fort Worth (DFW) and Los Angeles (LAX) are set to open later this fall.

Many United lounges are open again, but some are still only serving prepackaged “grab and go”-type offerings.

Summer Hull, TPG editorial director, has been in several United clubs recently, including Houston (HOU) and Dulles. She said, “... each club was really different.” Offerings varied from lounge to lounge. That wasn’t just her experience; she’d heard similar comments from many of her social media followers, too.

However, Hull also said that “United needs to elevate the club experience, but based on her low expectations, it outperformed, “... in some cases, it works better than before as you can grab and go. So, it’s not as great an offering as Amex or Delta -- but it never was. In some clubs, it’s as good as before, just different.”

If you were hoping to experience one of United’s business-class-only Polaris Lounges, you’ll need to wait a little longer. There are reports a few of them could reopen in 2021, but no official word yet on when.

All of Alaska Airlines’ lounges have reopened. I’ve been a few times recently to the spectacular flagship lounge at Seattle’s N gates. I found food offerings to be as good as pre-pandemic with hot beverages prepared by baristas, and a self-serve buffet available again. The full bar is open and there are long, not-socially-distanced lines for cocktails.

Even the pancake machines are back.

That’s a huge difference to offerings during the pandemic that were all self-serve and mostly sad prepackaged snacks.

Alaska Airlines is even bringing new experiences to some lounges. The brand-new lounge in San Francisco has a toast station where you can get a little bubbly and some bread with your choice of toppings. For the record, that’s sourdough toast from San Francisco’s Acme Bread Co.

The biggest disappointment, in my opinion, is the American Express Centurion lounges. I’ve had some unpleasant experiences at the Dallas-Fort Worth International Airport lounge, in particular.

That’s beginning to change, and Amex says self-serve is coming back. It can’t come soon enough, judging by the lounge in Dallas. Check out the lines. The lounge had one lonely employee serving from a closed-off buffet and wait times were very long; it took a half-hour to get food.

I will say, the lines at the Centurion lounge in Miami have been much more manageable when I’ve been, and other TPG staffers haven’t seen the problems I’ve seen at Dallas.

Lounges across America are reopening at a rapid clip, and the food offerings are getting better day to day. While it will be a while before everything gets back to pre-pandemic normal. We are happy to report there’s been dramatic progress.

Related stories
Chase Sapphire Preferred vs. Bank of America Travel Rewards — which should beginner travelers get?
5 things to know about airline travel alerts
Don’t forget: You have one month to use up your Uber Rewards points
You can earn Southwest points with the Rapid Rewards Dining program: Here's how
Featured image by (Photo by Scott Mayerowitz/The Points Guy)
Editorial disclaimer: Opinions expressed here are the author’s alone, not those of any bank, credit card issuer, airline or hotel chain, and have not been reviewed, approved or otherwise endorsed by any of these entities.

Our points-obsessed staff uses a plethora of credit cards on a daily basis. If anyone on our team wouldn’t recommend it to a friend or a family member, we wouldn’t recommend it on The Points Guy either. Our opinions are our own, and have not been reviewed, approved, or endorsed by our advertising partners.
See all best card offers
Related stories
Guide
Chase Sapphire Preferred vs. Bank of America Travel Rewards — which should beginner travelers get?
Guide
5 things to know about airline travel alerts
News
Don’t forget: You have one month to use up your Uber Rewards points
Guide
You can earn Southwest points with the Rapid Rewards Dining program: Here's how