Is the Travel Industry Finally Ready to Ditch Plastic? 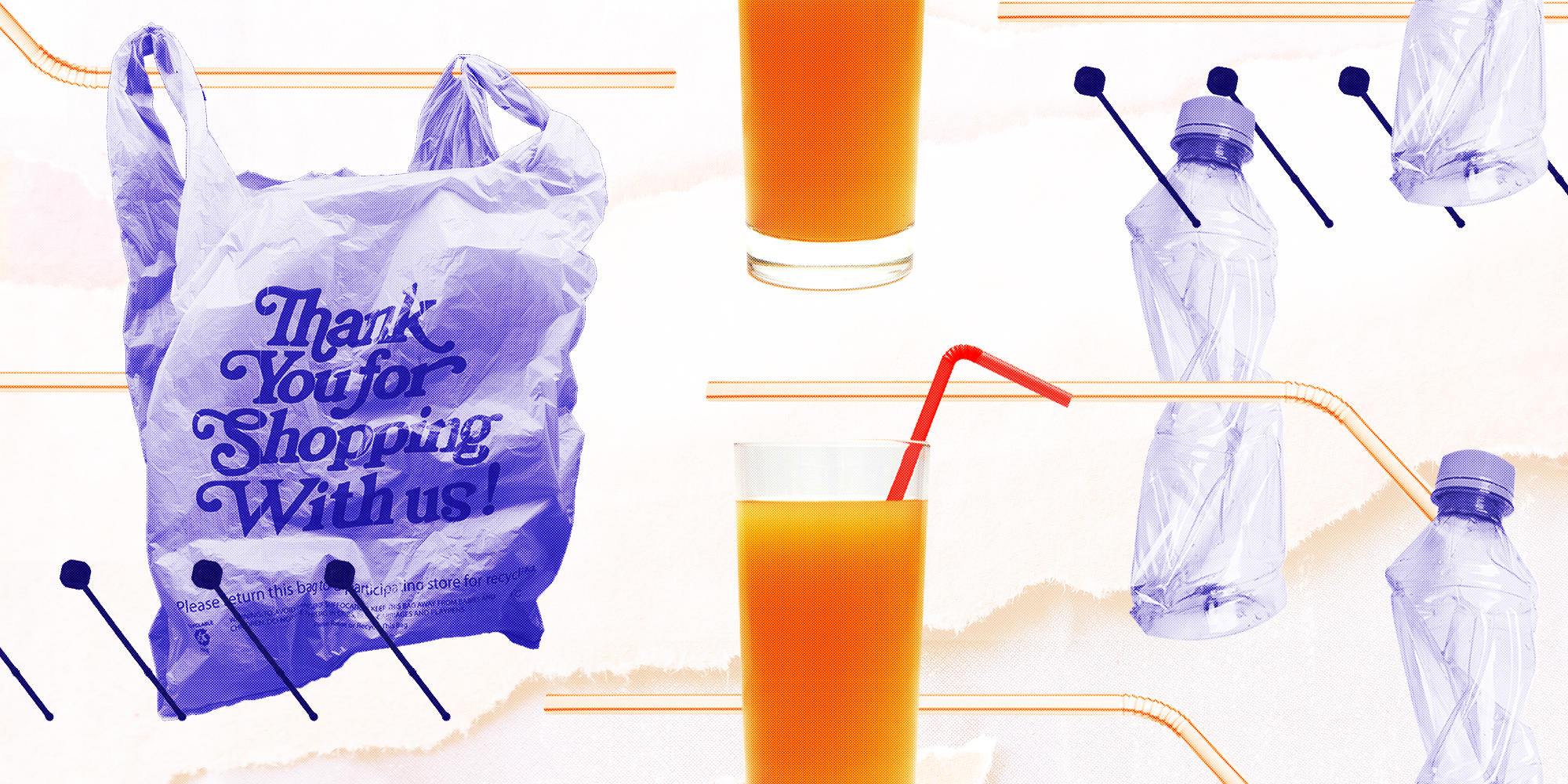 Lately, hotel and cruise companies have been doubling down on efforts to clean up one aspect of their business — single-use plastic. Last week, Virgin Voyages founder and CEO, Sir Richard Branson, reiterated his commitment to launching a cruise line that completely bans single-use plastics: not just straws but also water bottles and stirrers, shopping bags, condiment packets, to-go cups and other one-time-use items.

The bold move comes at a time when many companies seem fixated on ridding the world of single-use plastics (or, at least, straws). But will enough travelers follow suit to make it stick?

In July, Starbucks made headlines when it announced it would phase out plastic straws from all North American stores by 2020. Other major companies began taking a strong stance, too. Disney is in the process of removing plastic straws, as is Delta and the entire city of Seattle. Late last year, American Airlines, began transitioning to bamboo straws and coffee stirrers on its aircraft.

Without question, the announcements have had a ripple effect on hotels, airlines, cruise companies and tour operators everywhere. And while some criticize the move as inadequate, it’s hard to deny the positive impact that strawless travel can have. According to American Airlines alone, the move to plastic straw-free planes will remove 71,000 pounds of plastic waste each year. And while United, which announced its own ban on stirrers and cocktail picks in November, didn’t release any stats, it’s easy enough to do the math. The Chicago-based airline operates 4,600 flights per day, totaling 148 million passengers in 2017 alone — that’s a lot of picks and stirrers.

These brands are, in fact, doing more than just gloating. By increasing awareness about something as seemingly insignificant as a straws, travel companies are being forced to examine where else they can make changes. In November, the luxury chain Peninsula Hotels announced a worldwide ban on all plastic straws across its entire portfolio. But by the end of 2020, the company plans to move away completely from plastic water bottles and plastic bathroom amenities.

Over in Kauai, brand-new luxury resort Timbers Kauai has been serving drinks with paper straws since Day One. But going one step further, the resort has also come up with an ingenious reverse-osmosis system, using their onsite lagoon to irrigate the 18-hole golf course, thus saving hundreds of gallons per month. The 450-acre resort is also committing to solar panels to power the entire property.

The good news is spreading. Meliá Hotels International, which counts 374 hotels in its entire portfolio, served 22 million plastic bottles to 30 million customers in 2017 (that’s roughly three-fourths of a bottle per guest). As of June, the Spain-based company has pledged to eliminate single-use plastics by the end of the year. Instead, kitchens and bars will use all biodegradable or eco-friendly alternatives for bottles, cups, bags, straws and coasters.

Meanwhile, IHG and Marriott have now vowed to do away with shampoo bottles, while 1 Hotels supplies water filters in guest rooms to eliminate the need for plastic water bottles.

As for how guests are coping, Maria Umbert, a spokesperson for Meliá, admits the biggest challenge, “will be to convince customers” that this is a worthy cause. And she’s not alone: Executives at Marriott, Kimpton, Carnival, American Airlines and Norwegian, among others, all seem to be on board with the change.

With the European Union signing a new bill that would eliminate plastic cutlery, plastic plates and plastic straws by 2021, it’s hard to ignore the gradual cultural shift taking place across the globe. But even as the public continues to be educated about the environmental impact of single-use plastic, many travelers are still firmly in favor of disposable straws.

“Mostly, its habit,” said Trent Hodges, plastics pollution manager at Surfrider, a California-based group that works with businesses to create better environmental practices (they even have a list of ocean-friendly restaurants). According to Hodges, straws have become a symbol for our disposable culture — an addiction that can be hard to break. “Customers and businesses have gotten used to serving water with straws, or delivering food in a plastic bag.”

One of the more uncomfortable parts of the straw revolution is the confusion around what should replace them. Paper straws have become more prominent now, though their functionality is dubious — they tend to get soggy and fall apart, often before the beverage has been finished. Other venues are experimenting with seaweed-based, bamboo and even pasta straws.

In grocery stores and some bars, the allure of the metal straw is growing. With consumer brands like Target offering four-packs of metal straws for just $6, it’s not unreasonable to suggest that travelers might simply start carrying their own straws with them when they hit the road. Of course, whether hotels and other travel companies choose to actually invest in reusable metal straws for guests is another story.

Do biodegradable straws cost more than the average plastic straw? Yes. But is that an issue for travel companies? It depends who you ask.

Kimpton, unlike, say, McDonald's, takes a glass-half-full approach, claiming that reusable products (such as bamboo plates and wooden utensils) are more efficient than disposable ones.

In other words, if straws become less visible, less customers will want them, and thus, companies will save money by buying less of them.

Meanwhile, a spokesperson for Meliá Hotels said that eco-friendly alternatives, despite being more expensive, serve a wider purpose for tourism: “We see these costs as a long-term investment which will help us to protect the destinations’ ecosystem.”

No Straws on Cruises

While paper or metal straws have been appearing in hotels and select bars for some time, they’re now making their way onto cruise ships. In July, as part of its Sail & Sustain program, Norwegian announced it would eliminate single-use plastic straws across all 26 ships in its fleet (an eco-friendly option will be provided upon request). Royal Caribbean did away with them in December, and Carnival has stopped serving sodas and nonfrozen cocktails with a plastic straw unless the guest asks for one. While Princess is still testing handing out straws on request on select cruises, it hasn’t formally announced a plan to eliminate them.

“Guests can still enjoy their favorite tropical cocktails as before,” Norwegian spokesperson Andrea Sugranes said. “The elimination of plastic straws does not affect what can be served on board. We simply won’t be serving any beverages with straws.”

And for any guests wondering whether drinks will start to become more expensive with the added cost of eco-friendly straws, Sugranes has one simple answer: They won’t.

Airlines (and Airports) Are Doing It Too

If you think the changes are just limited to big players like American and United, you’d be wrong. Alaska Airlines made a similar commitment back in May, pledging to substitute all plastic stirrers with white-birch stir sticks, and offering nonplastic, marine-friendly straws upon request. And just last month, a little-known carrier in Portugal made headlines by launching the world’s first plastic-free flight.

While plastic cups and other food packaging remain a glaring source of daily waste for all airlines, this at least shows that eco-conscious behavior has seeped into other areas of the travel industry, too.

For Kevin Kelly, the president of the travel division, reducing the company’s carbon footprint has financial advantages, too.

“It’s a lot more expensive in an airport because garbage cans are in post-security area, [and there are] tipping fees on dumpsters," he said. "[Focusing on zero waste] is just good business, is what that is.”

For now, using biodegradable straws (or not using straws at all) is likely to have very little impact on the guest experience. After all, if you reflect on your favorite things to do while on vacation, most would be entirely possible without the aid of a single-use plastic straw: swimming at the beach, enjoying a candlelit dinner, paddling in a canoe, to name a few.

As Banyan Tree Hotels’ sustainability director, Steve Newman, puts it, “Plastic is all about convenience.” Envisioning a day when you might fly, cruise or stay in a hotel and never encounter any plastic at all is difficult — but the implications of the straw ban show that as hotels, cruise lines and airlines endeavor to produce less plastic waste, a change in travelers’ attitudes could go a long way.