Articles
Kaeli Conforti is a digital nomad and has been backpacking solo around Southeast Asia, Australia and New Zealand since January 2018. She loves inspiring others to travel the world and create their own adventures.
Follow
Dec. 15, 2019
•
8 min read 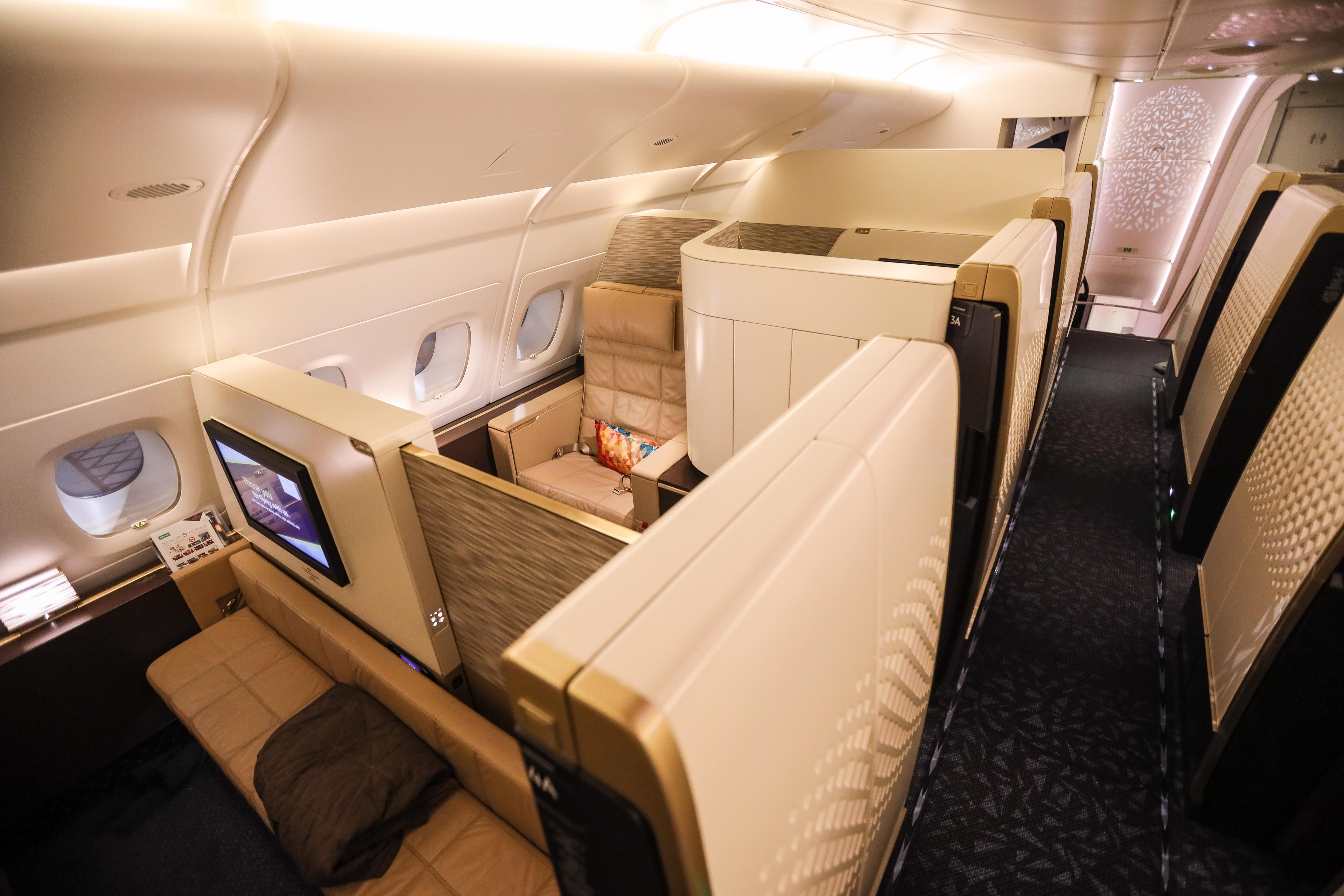 It's that time of year again (can you believe it's mid-December already?!) We recently asked our TPG Lounge readers to share their best award flight redemptions of 2019. Here’s a look at some of our favorite answers. (Some responses have been lightly edited for style and clarity).

Great trips around the U.S. and to Europe

From well-planned trips to the Hawaiian Islands to across-the-pond pilgrimages for NHL hockey games in Sweden, our TPG Lounge members certainly know how to cash in those hard-earned miles for a memorable trip.

"Zero out-of-pocket costs for a Delta premium economy ticket from Columbus (CMH) to Atlanta (ATL) to Los Angeles (LAX), with a pending upgrade to a Delta One Suite on ATL-LAX leg. [Scored a] $100 gift card from The Points Guy for submitting a story and put the rest on The Platinum Card® from American Express ($695 annual fee. See rates & fees), so it was reimbursed with some of the annual $200 travel waiver. In my book, not too bad. Thanks TPG!" — Steph S.

"I used around 120,000 Southwest Rapid Rewards points along with the Companion Pass to fly my wife and I from Denver (DEN) to Honolulu (HNL), HNL to Maui (OGG), OGG to Kona (KOA) and back to DEN this July. Worthwhile redemption for sure." — Kyle G. N.

"Booked four tickets round-trip from Seattle to London for 28,000 Delta SkyMiles per person in coach for May 2020. I don’t mind sitting in coach if it allows me to travel with my family. I have three adult children in their twenties and they still want to travel with us, so that’s a big score in my book." — Jackie F.S.

"70,000 Delta SkyMiles, plus $23 via Delta Vacations for two of us to fly round-trip from Boston to Paris in economy and spend five nights at the Maison Astor Paris (Curio Collection by Hilton). That double value promo plus incredibly low airfares this winter made this Paris trip one of my best budget redemptions ever." — Jon F.

"My boyfriend and I went to Sweden for the NHL Global Series. Two round-trip tickets from New York (JFK) to Amsterdam (AMS) to Stockholm (ARN) for 60,000 SkyMiles!" — MacKintosh B.

Adventures in Africa, Asia and the Middle East

Our TPG Lounge readers never fail to impress us when it comes to redeeming miles to fly long-haul in the best business and first-class products in the skies. Here's how some of them were able to fly in QSuites, Emirates first class, Etihad's Apartment, Singapore Suites, ANA first class and Cathay Pacific business class — all on points and miles.

"118,000 miles per person transferred from Chase Ultimate Rewards to fly one-way in first class on Singapore Airlines from Los Angeles to Tokyo to Singapore to see the cherry blossoms and taste some awesome food. On top of that, we got to sit next to James Corden. Totally worth the miles for almost 19 hours in flight altogether." — David O.

"70,000 AAdvantage miles to fly from San Francisco to Hong Kong to Singapore in business class on Cathay Pacific." — Danielle P.

"120[k] Chase Ultimate Rewards points on Singapore Airlines [to fly] from Phuket (HKT) to New York (JFK). HKT to Singapore (SIN) was in business class and from SIN to JFK was in Singapore Suites!" — Catherine S.

"Our first lie-flat and transfer/redemption experience for our Egypt trip. After 10 months of planning, I still can't believe it's already over. Every future flight will now be compared to the Qatar QSuites and found to be lacking. We transferred 70,000 Chase Ultimate Rewards points to United and 55,000 American Express Membership Rewards points to Aeroplan to fly in Swiss Air business class to get to Europe. Then, used 70,000 AAdvantage miles per person to fly from Cairo (CAI) to Amman (AMM) in Royal Jordanian business class — loved the 787 Dreamliner — and flew in QSuites from Doha (DOH) to Boston (BOS) to get home." — Loren G.M.

"140,000 AAdvantage miles to take my daughter from New York to Hong Kong to Beijing in business class on Cathay Pacific and 140,000 Alaska miles to fly Japan Airlines from Tokyo back to New York." — Paul L.

"100,000 AAdvantage miles to fly from Seoul (ICN) to Abu Dhabi (AUH) and back to ICN in Etihad Airways First Class, a.k.a., The Apartment. I had seat 2H on the way out and seat 1H on the return trip. The service was excellent and the lounge in AUH was the best I've seen." — Juan V.

"220,000 Chase Ultimate Rewards points for two round-trip first-class tickets from San Francisco (SFO) to Tokyo (NRT) to see the cherry blossoms. A long-time bucket list item checked off and we really enjoyed our first time in international first class. It was ANA booked using Virgin Atlantic miles. We had to book 11 months out, as soon as the seats were released." — Anthony I.

Epic flights to Oceania and beyond

Some of our intrepid TPG Lounge members mentioned how they were able to use award redemptions to fly to Melbourne or home from Perth, Australia, while another described his epic round-the-world points-and-miles adventure.

"60,000 Alaska miles to fly from Perth (PER) to Los Angeles (LAX) in business class on Cathay Pacific. That is a long flight, even with a one-day layover in Hong Kong for that small amount of miles. And even though the CX 777s are getting a bit old, they are still comfy." — Sally W.S.

"An around-the-world trip, transferring 200,000 American Express Membership Rewards points to ANA: Flights from San Francisco (SFO) to Taipei (TPE) to Shanghai (PVG) to Seoul (ICN) to Singapore (SIN) to Kuala Lumpur (KUL) to Dubai (DXB) to Istanbul (IST) to Buenos Aires (EZE) to Panama City (PTY) to Los Angeles (LAX). Carriers included EVA Air, Asiana, China Air, Singapore, Thai Airways, Turkish Airlines, and (ugh) Copa — all were in business class or with lie-flat seats except Copa — the Copa seats were in business all right, but not all that! I scheduled three nights in each city, and maybe four nights in one or two, so I also used this trip to get myself elite status with Marriott Bonvoy." — Peter H.

Related stories
Should you buy Marriott points with a 50% bonus?
5 secrets to getting a luxury cruise for less
Deal alert: Widespread Air Tahiti business class award space to French Polynesia
This no-annual-fee card earns 2% cash back on every purchase — and automatically applies your rewards
Featured image by Photo by Nicky Kelvin, TPG UK.
Editorial disclaimer: Opinions expressed here are the author’s alone, not those of any bank, credit card issuer, airline or hotel chain, and have not been reviewed, approved or otherwise endorsed by any of these entities.