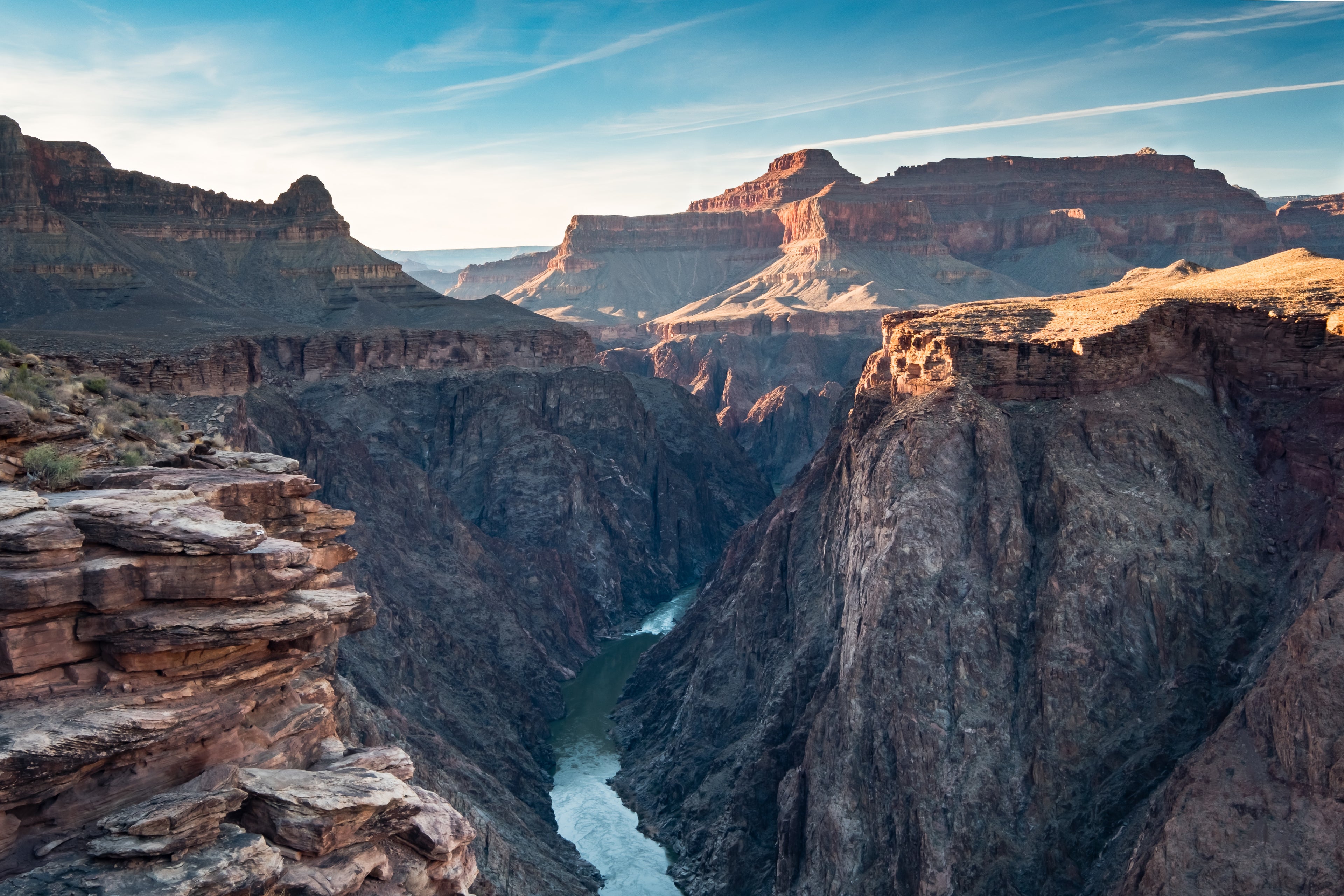 11 Tips for Celebrating Grand Canyon National Park’s 100th Birthday
This post contains references to products from one or more of our advertisers. We may receive compensation when you click on links to those products. Terms apply to the offers listed on this page. For an explanation of our Advertising Policy, visit this page.

On Feb. 26 in 1919, exactly 100 years ago today, the Grand Canyon was officially designated a national park. The sprawling 277-mile-long canyon is the centerpiece of a breathtaking landscape that has enchanted travelers for much longer than it’s been an officially protected area. In honor of the park’s centennial birthday, we’re highlighting 11 important tips and tricks for having an unforgettable trip to the phenomenal landmark.

If you want to avoid the crowds, head to the North Rim, which is typically less congested than the easier-to-reach, more developed South Rim. Just be aware that the North Rim closes in the winter (from Dec. 1 to May 15). Visit during peak season, however, and you’ll be rewarded with a far quieter, more private experience. Travelers with their hearts set on the South Rim should plan to get up very early in the morning during the summer, or visit during the off-season (weather permitting).

TPG’s director of family content, Summer Hull, took the mule ride on the North Rim when she was 12 years old — and can still remember it vividly today. “Mule rides are available for kids as young as 7 to 10, depending on the tour,” Hull said. “But book in advance, as there are very limited slots each day. It is an unforgettable and timeless way to see the Grand Canyon.”

Plan a Side Trip to Havasupai

Havasupai Indian Reservation is just beyond the boundary of Grand Canyon National Park, but is a bit far from the main tourist areas and is accessible only by a strenuous day-long hike. But according to associate editor Brendan Dorsey, you shouldn’t be deterred from visiting what he considers to be, “one of the most beautiful places in the world.” Think: unbelievable turquoise blue falls against a desert red backdrop. Unfortunately, you may have to wait at least another year before visiting. “This spot is so popular that you'll have to reserve your camping spot the day reservations open, which is usually on Feb. 1,” Dorsey said. That means reservations for the entire 2019 season are likely sold out.

Go for a Scenic Ride

“We really enjoyed the Grand Canyon Railway experience,” said Buddy Smith (aka Grandpa Points). “While it is a for-profit, tourist business venture, we think that the public profits because of the outstanding way the operation is run. The multi-hour trip each way was fun, relaxing, nostalgic and interesting. The cars are historically restored, the employees are informed [and] personable … and the train magically transports you back in time 125 years. We recommended this trip to our closest friends and they loved it. And, we recommend it to you.”

“The area immediately surrounding the Grand Canyon isn’t exactly a hotbed of great points hotels,” said reviews editor Nick Ellis. “But if you’re willing to stay a little farther south, in Sedona, your options improve considerably. IHG has the Kimpton Amara Resort and Spa, while Hilton aficionados can rest their heads at the Hilton Sedona Resort at Bell Rock.” And later this year, L’Auberge de Sedona will become an option for Hyatt loyalists.

Southwest's forgiving no change fee policy allows you to rebook an award flight, and get a partial refund of points if the price drops after booking, making it one of the best options for travelers planning to fly into Sky Harbor International in Phoenix (PHX) or McCarran International in Las Vegas (LAS).

Or Fly Into Flagstaff

Splurge on the Park Pass

Driving your family to the Grand Canyon? Expect to spend $35 for entry. Even if you’re entering on the Grand Canyon Railway, by a park shuttle bus, on a bicycle or by foot, you’ll have to spend $20 per person. Consider instead the $80 America the Beautiful annual national park pass, which lets you (and everyone in your vehicle) visit more than 2,000 national parks, forests, monuments and more as many times as you’d like in a year.

Get an Adrenaline Rush

OK, so it’s not technically part of Grand Canyon National Park. But last year, the West Rim unveiled the zip line at Grand Canyon West, which features two quad-style zip lines totaling 3,200 feet in length. Enjoy the views while zipping along 1,000 feet above the Grand Canyon. This is also where you’ll find the cantilevered Skywalk, which stretches 70 feet beyond the rim of the Canyon.

You don’t have to plan a trip to Grand Canyon National Park to enjoy the stunning natural wonder. Book a window seat on the left while flying from Phoenix to Salt Lake City, for example, and you’ll enjoy aerial views of one of the nation’s most iconic landmarks. According to editor Jane Frye, coast-to-coast flights to Los Angeles and Las Vegas will also give you a great view of the canyon — so long as you reserve a seat on the right. Of course, if either Las Vegas or Phoenix are on your itinerary, we hope you’ll make time to visit the monument in person, too.

Events celebrating the Grand Canyon National Park's 100th birthday will continue all throughout 2019. On March 1, for example, Ed Kabotie — a musician and artist from the Hopi and Tewa tribes — will spend an evening sharing the history of the people of the Grand Canyon at the visitor center. And from June 22 to 29, the park will host a free Centennial Summerfest with cultural demonstrations, stargazing parties and more.