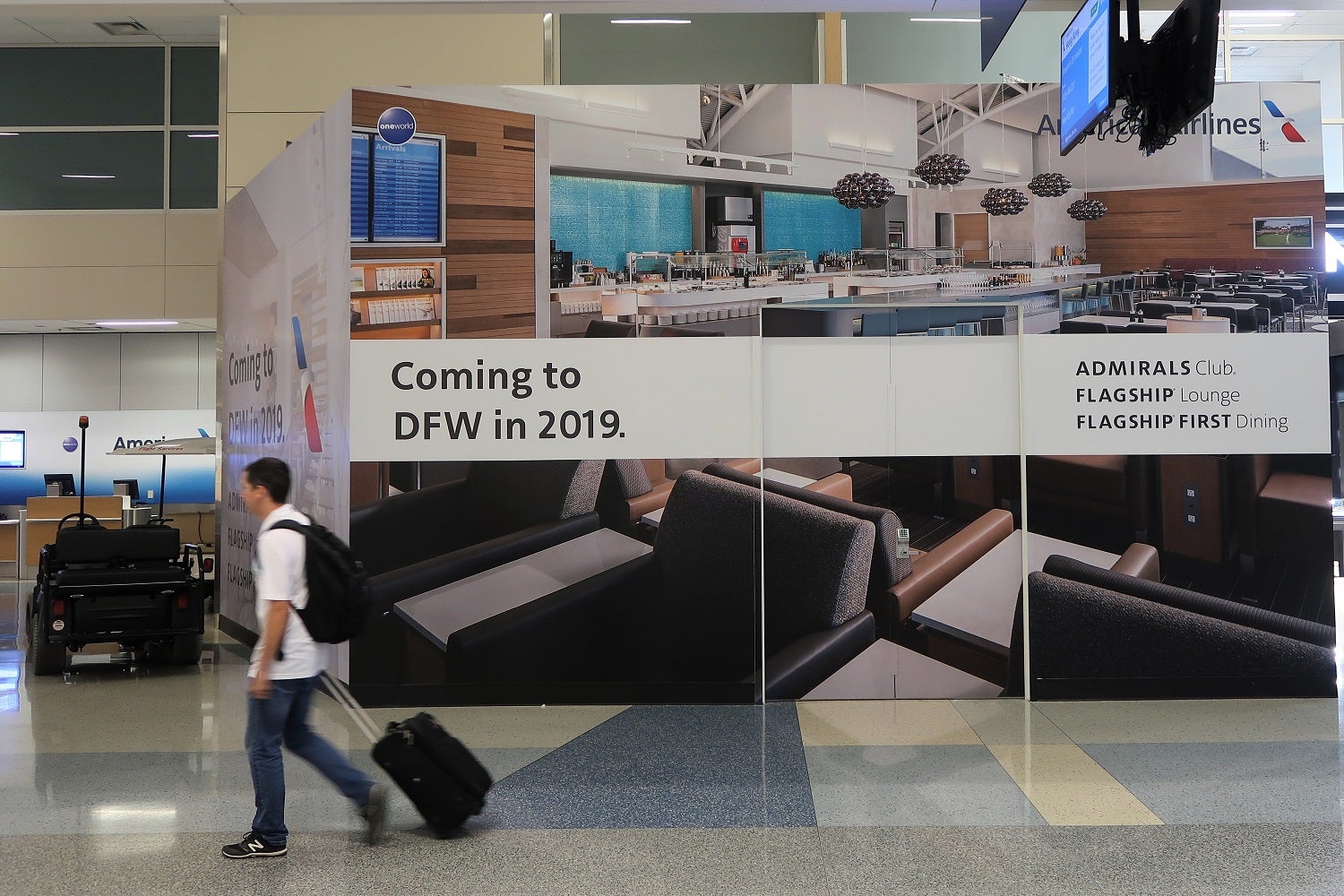 Until recently, I've never struggled for lounge options when connecting through Dallas/Fort Worth (DFW). Should I visit my favorite Admirals Club for runway views or get a massage and a cocktail at the Centurion Lounge? But now, both of these lounges are closed, and — to make the situation worse — the only traditional Priority Pass lounge is in a small temporary location.

The State of the DFW Lounges is currently rather sad, and I know this personally from having spent nine hours in DFW on Friday between flights. Thankfully, that gave me plenty of time to check out the situation and find out when these lounges are going to reopen.

The excellent — albeit always crowded — DFW Centurion Lounge closed on July 24 for renovations with a reopening scheduled for August 14. With this date in mind, I was planning on spending a few hours checking out the new club this Friday, August 17. But, unfortunately, we got word on August 10 that this location would never reopen.

But not all cardholders have gotten the message. While I was taking photos of the outside of the closed lounge, travelers continued to stumble zombie-like into the lounge closure signage. When I pointed them to the adjacent temporary Club lounge next door (more about that below), few had their Priority Pass cards on them. Don't be one of those travelers.

Reopening: While this particular location will never reopen, American Express is opening a newer, larger DFW Centurion Lounge in "early October" near gate D12. If you have The Platinum Card® from American Express, make sure to go through this checklist to maximize your card membership.

For years, my favorite Admirals Club has been in DFW's Terminal D. It's open design, tucked-away business center, plentiful showers and excellent view of the apron and runway always made layovers easy for me. Sadly, that's no more. AA closed this lounge earlier this year to build DFW's Flagship Lounge, complete with Flagship First Dining.

Reopening: We don't have specific timing on when this project is going to be complete. Signage outside the lounge only references "2019." Right before the lounge closed in April 2018, an agent noted it would be closed for 18 months — which would indicate a October/November 2019 reopening.

The fourth-busiest airport in the US currently only has one traditional Priority Pass lounge — The Club DFW — and it's in a temporary location. With a seating capacity of maybe 50 and with the two largest-capacity lounges in Terminal D closed for renovation, it's no surprise that it's going to be packed. Prepare to snag any seat that's available.

Not only is the seating tight, but the food options aren't going to impress. When I visited Sunday morning, there were only a few pastries and some yogurt available. On Friday midday, the food options were a choice between four different types of flavored popcorn. Paradoxically, there's a staffed bar offering a wide selection of beers, wine, Freixenet sparkling wine and liquor — with mixers available for simple cocktails.

Reopening: Thankfully, the new lounge should be opening in less than a month. A lounge worker that I spoke with during my visit on Friday noted that the new lounge would reopen September 15 "if it isn't pushed back again." The permanent lounge will be near Terminal D Gate 23. UPDATE: Reports are that this lounge will reopen on October 4.

American Airlines Admirals Clubs in Terminal A, B and C

While the Admiral's Club is closed for renovation in Terminal D, AA still has three more Admirals Club lounges open at DFW. The Terminal A lounge just reopened in April after a lengthy renovation project. It might be revisionist history, but after spending a few hours in the club on Friday, I'd say it was worth the wait. The surprisingly large club is sharp and well appointed — at least for an Admirals Club.

You can access these Admirals Clubs when traveling on a qualifying international route in business/first class or as an American Airlines Platinum, Platinum Pro or Executive Platinum elite; when traveling on a Oneworld airline as a Oneworld elite on a program other than AA; or via the Citi AAdvantage Executive World Elite Mastercard. While the $450 annual fee sounds steep at first, remember you can add up to 10 authorized users for free and each user can guest in two additional passengers. That means one card can get 33 passengers Admirals Club access.

During the renovation of the Terminal D lounge, American Airlines has opened a temporary "premium lounge" near gates D34/D36. This lounge's access policy mirrors the Flagship lounges, so you're going to need to be flying intercontinentally in a premium cabin or a non-AA Oneworld Sapphire or Emerald to access. Unfortunately, I haven't been through DFW on an eligible ticket since this lounge opened, but I hope to review it soon.

Priority Pass members looking for a private place to nap or work are in luck. You can get a free hour at each of two Minute Suite locations in DFW (Terminal A near gate A38 and Terminal D near gate D23) with extra hours costing $28 per hour. Combining two of my Priority Pass cards (from my Chase Sapphire Reserve and my Amex Platinum Card) with my wife Katie's Priority Pass card (from her Citi Prestige), we were able to book a "suite" for three hours Friday morning in Terminal D.

We found it refreshingly identical to what we experienced at the location we reviewed in Atlanta. While there's not much room for two people, there was enough for us to crash for a nearly three-hour nap.

Earlier this year I got a chance to tour the newly-renovated lounge, which reports indicate is a significant improvement from the prior lounge. Get access via the United Club Card, the United Club Business Card or the United Explorer Card's two annual United Club one-time passes.

One of the few DFW lounges I've never visited — or even seen — is the DFW Delta Sky Club located near gates E10 and E11. Amex Platinum Card cardholders get access to this club when flying on a Delta-operated flight. Also, Delta Reserve® Credit Card from American Express cardholders get free access but have to pay $29 per person to guest anyone in with them.