Articles
Kathryn Romeyn is a travel and design journalist living in Bali, Indonesia, who travels frequently with her husband and toddler. She contributes to The Points Guy, plus a variety of other publications, and co-hosts Conscious Traveler, a podcast inspiring meaningful exploration through stories of culture, conservation and community.
April 22, 2022
•
9 min read 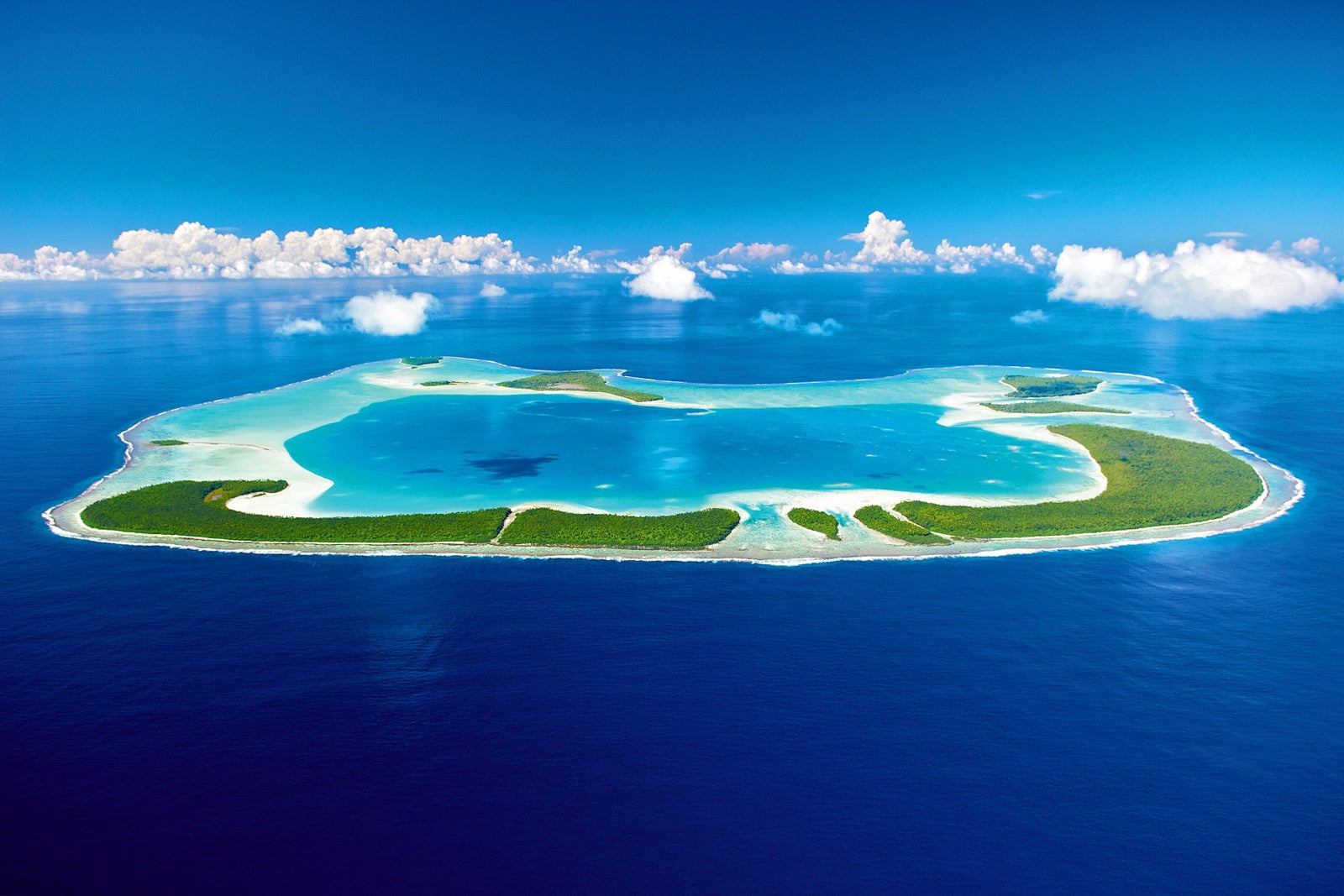 How the real star of this French Polynesia resort is its sustainability efforts
This post contains references to products from one or more of our advertisers. We may receive compensation when you click on links to those products. Terms apply to the offers listed on this page. For an explanation of our Advertising Policy, visit this page.

French Polynesia’s Tetiaroa atoll, where Marlon Brandon famously filmed “Mutiny on the Bounty” before purchasing it in 1967, is home to a hotel that’s the pinnacle of luxury, with a sustainable twist.

The picturesque setting is where you’ll find The Brando, a high-end resort that has welcomed everyone from Leonardo DiCaprio to former President Barack Obama since opening in 2014. However, there’s more to this lavish property than its star-studded guest list — and the legendary late actor whose name graces it.

Eleven of the atoll’s 12 islets (or motus) are uninhabited nature preserves. The twelfth, Motu Onetahi, is home to a LEED Platinum-certified and a carbon-neutral resort dreamed up with the help of Richard Bailey from Pacific Beachcomber, a sustainable hospitality company that manages some of French Polynesia’s most opulent hotels, including the InterContinental Tahiti Resort and the Maitai Bora Bora.

The Brando includes just 35 uber-private villas, two restaurants, a bar and a spa, but it’s not your average island getaway.

In addition to a $12 million sustainable sea water air conditioning system (known as SWAC) that uses cool ocean water to partially power the property’s AC units, the resort is powered by generators running on locally produced coconut oil and thousands of solar panels. It also features a desalination plant for creating freshwater, a composting station and dozens of beehives where bees produce honey for on-site use and consumption.

Sharing the motu with the hotel is a pioneering eco-research facility with an impressive list of initiatives and programs designed to help fight global warming, counter habitat loss and prevent the extinction of threatened plant and wildlife species.

An affiliated nonprofit organization called the Tetiaroa Society also manages guest experiences at the resort and provides naturalist guides to lead land and water activities for guests. Operating out of The Brando’s Ecostation, which the property built and gifted to Tetiaroa Society, the nonprofit invites researchers, students and visiting scientists to come to Tetiaroa to study the sustainable interdependence of humans and ecosystems and learn how to put their discoveries into practice across the globe.

Over time, the organization’s research has expanded to include conservation initiatives and educational programs focusing on protecting the area’s habitats and wildlife. Anywhere from two to 30 scientists are at work at any given time in the Ecostation’s wet and dry lab, which is led by the University of California, Berkeley-trained scientist Frank Murphy.

The facility now welcomes others hoping to understand the sustainable hotel management operations in place. The eco-resort regularly receives members of the hotel industry coming to take the Green Tour, a 90-minute back-of-house experience that showcases the Ecostation, as well as The Brando’s innovative, low-impact infrastructure.

For example, tourgoers can learn more about how SWAC retrieves sea water from 3,050 feet deep to cool resort buildings without using processes that contribute to global warming.

Participants can also check out the vegetable and fruit garden that was created using compost made with food waste, an incredible feat given the difficulty around growing produce on sand and coral soil. The garden’s bounty supplies some 10% of the resort’s menus and includes fruits, such as bananas, that cannot be imported due to concerns regarding introducing invasive species to the atoll.

“It’s a real moment of transparency with our guests who understand the behind the scenes of our eco-resort,” says Anne-Laure Amabile, The Brando’s corporate social responsibility coordinator. “They realize that sustainable issues can be solved when we work on a large scale.”

However, focusing on sustainability doesn’t mean guests who can afford to visit this pricey property — where rates start at 3,700 euros (about $4,024) per night, excluding taxes — need to sacrifice luxury in the process. The sumptuous villas offer eco-friendly details like sensors that cut off air conditioning when the doors or windows are open to capture the sea breezes, while the spa features a therapeutic cold sea water bath that uses saltwater from the ocean similar to the SWAC system.

Each year, the resort also holds sustainable development events such as beach cleanups, coral cutting projects (which involve replanting fragments of healthy corals elsewhere) and baby green sea turtle releases when a nest hatches. All of these initiatives tie into the bigger goal The Brando has set for itself: to bestow its guests with a meaningful vacation that helps inspire them to take action to protect our planet while supporting the creation of sustainable solutions for the travel industry.

“All of the scientific and conservation programs on Tetiaroa are focused on either the preservation of local natural and cultural heritage or on global climate change issues,” Ecostation scientist Frank Murphy explains.

Murphy is particularly proud of the University of Washington’s Ocean Acidification program, which he calls an “amazing” partnership with the Leonardo DiCaprio Foundation that is enabled by one of the Ecostation’s sustainability initiatives, SWAC. By transferring highly acidic water pumped from deep in the ocean to a small portion of the surrounding reef, the program is seeking to simulate conditions expected to be present a century from now. Scientists hope that the effort will help them predict how coral reefs will respond to climate change and conceptualize ways to save the fragile ecosystem.

Another impressive accomplishment to come out of the Ecostation is the chemical-free mosquito abatement program on Motu Onetahi. Created with the Institut Louis Malardé, the public research institution of French Polynesia, the program aims to eliminate mosquitoes (which are vectors for infectious diseases like Zika and dengue) from the area by releasing male mosquitoes into the wild that are sterile and therefore unable to successfully fertilize female mosquito eggs. Obama even got involved in the effort by releasing some sterile male mosquitoes during his stay in 2017.

The Ecostation’s flagship Tetiaroa Atoll Restoration Program (TARP) aims to remove invasive species — namely rats, which came by boat and are a green sea turtle predator — from the island and restore the atoll’s terrestrial and marine habitats. Since its creation in 2018, TARP has eradicated rats from Motu Reiono and two other motus, including Onetahi. The program is also targeting the removal of yellow crazy ants, an invasive species that threatens young birds and other native animals, and thinning out the invasive coconut tree population this year.

“It is expected that the removal of key invasive species will allow for the recovery of keystone species such as seabirds and restore nutrient levels to both terrestrial and marine flora and fauna,” Murphy says.

By tracking the resulting changes to the seabird population (which scientists believe play a part in keeping coral reefs healthy), Murphy hopes to see how the area’s reefs might become more resilient, thus “providing a platform to conduct transformative ecosystem-level conservation focused on the linkages between land and sea.” This, paired with Polynesian cultural knowledge of caring for the precious atolls, can help raise awareness about how important these connections are for not just the survival of biodiversity, but for sustainable human development, according to Murphy.

The implications are immense — and not just for French Polynesia. The global hotel industry is gradually applying more sustainable practices, such as reducing or eliminating single-use plastics and actively recycling or composting waste.

“The visionary strategy [from Brando and Bailey] has been embedded in our values since The Brando’s design was written,” Amabile says. “As such, we can only be a good example to [the hospitality industry]” through sharing findings and successes with others.

“At the scale of Tetiaroa, The Brando’s staff and all its stakeholders, including Tetiaroa Society, represent a true community living in an energy and water self-sufficient village,” Amabile says. “The sustainability sector needs examples of eco-responsible communities to begin its transition, and Tetiaroa is a perfect example.”

In the words of Pacific Beachcomber’s Richard Bailey, Obama’s visit was a “consecration” of this work. However, on a grander scale, The Brando and Tetiaroa Society’s symbiotic partnership stands as a guidepost for the hospitality industry, showing that sustainable and successful development that actually benefits the planet while allowing travelers to explore its most unique places is possible.

Featured image by TMK, TMK
Editorial disclaimer: Opinions expressed here are the author’s alone, not those of any bank, credit card issuer, airline or hotel chain, and have not been reviewed, approved or otherwise endorsed by any of these entities.