Private Island Paradise: A Review of The Brando in French Polynesia 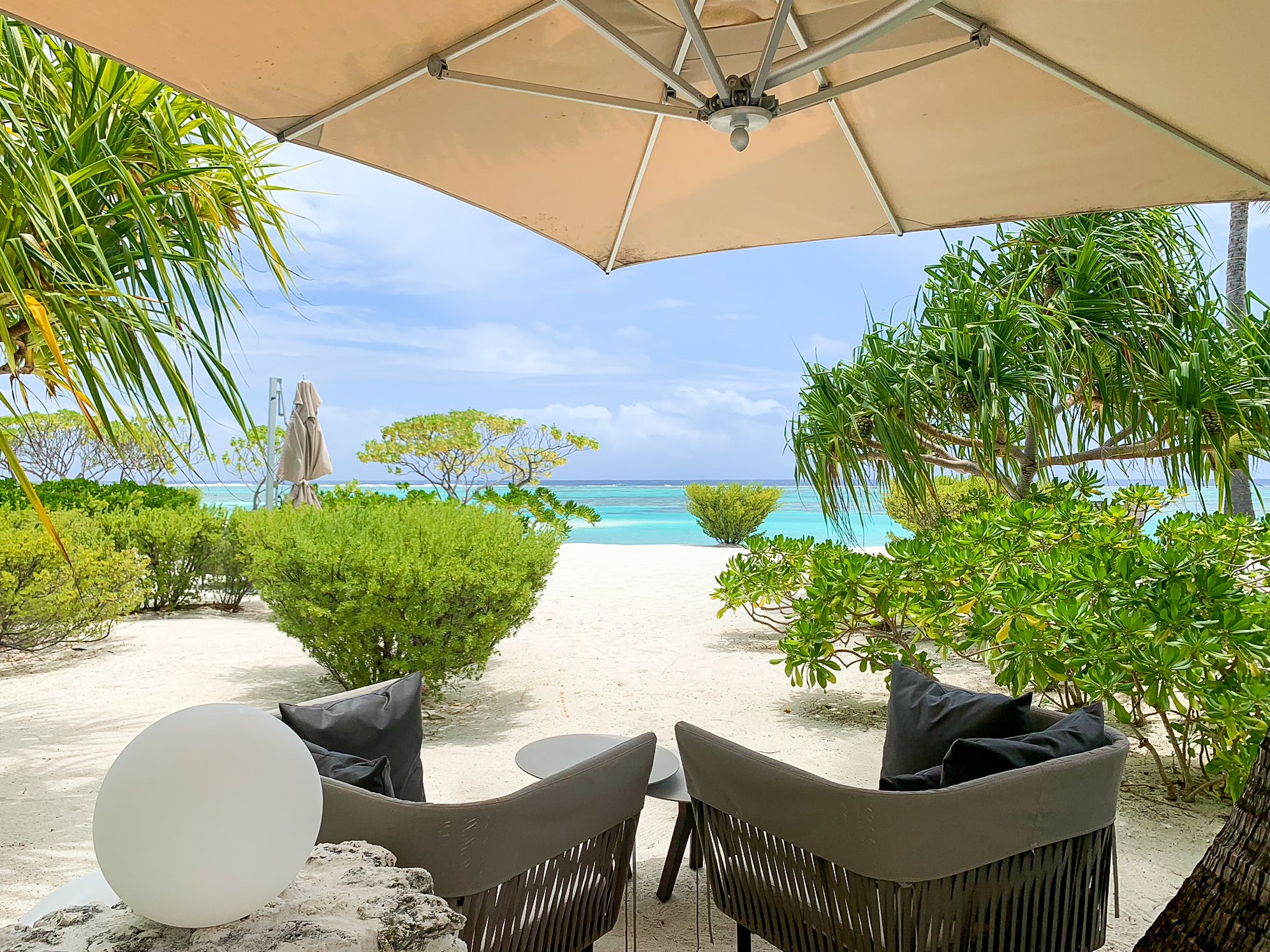 How does vacationing on a private tropical island in French Polynesia like one of the biggest stars in Hollywood history sound right about now? Pretty amazing, right? Ever since Barack and Michelle Obama vacationed there after his presidency, I'd been hearing all about The Brando resort, an eco-friendly, cooler-than-cool spot on the tiny French Polynesian island of Tetiaroa.

And yes, Brando as in Marlon. The reclusive star fell in love with this very island while filming "Mutiny on the Bounty" and eventually semi-retired there while taking occasional breaks to film little flicks like "The Godfather" and "Last Tango in Paris."

So, I decided to suck it up and visited the private-island resort for myself to see if it really lived up to all the hype.

Vacationing on this private island frequented by some of the world's most famous people wasn't cheap, as you could imagine. However, I had a weapon in my arsenal that would lessen the shock pretty dramatically: my Citi Prestige's fourth-night-free perk, which brought the total for my four-night stay down from $16,523 to $12,970, or $3,242 per night instead of $4,130. Not bad for a card with a $450 annual fee, which recently reopened for applications. (Some changes were recently made to the card, so make sure you're aware of them before you apply.)

If you don't have a Prestige card, the next best way to pay is with your Chase Sapphire Reserve, which earn you 3x points on your purchase. The Brando isn't bookable on Hotels.com and therefore is not eligible for the Capital One Venture card's 10x earning rate through the site. But the hotel often offers discounts: Right now, it's offering up to 15% off your room rate when you stay five nights.

The rate was based on double occupancy and included almost everything -- all meals, snacks, drinks and some activities. However, it did not cover the 450-euro ($515) round-trip flight between Tahiti (PPT) and Tetiaroa (TTI). Nor did it cover spa treatments or tips for staff. If you're planning a trip for yourself to The Brando, make sure to book far in advance, as the resort is small (35 villas) and fills up quickly.

Tetiaroa has a long history among the Polynesian people. It's known as a sacred spot, was once a favorite vacation island of Polynesian royalty, then was later bought by Hollywood royalty — Marlon Brando. The actor and his partners had a vision of turning the island into a super-luxe, post-carbon resort. Today, The Brando occupies the whole island.

Like any remote island destination, getting to Tetiaroa isn't as simple as a nonstop flight from home. Many flights landing in Tahiti do so in the evening, pretty much guaranteeing an overnight stay at a Tahiti hotel. In my case, it was the InterContinental Tahiti, about 10 minutes from the airport in Papeete. After my InterContinental stay, it was just a 20-minute flight on Air Tetiaroa from PPT to The Brando.

The hotel had its own landing strip. It was beautiful to fly in and see the stunning blue water below.

The Brando has three styles of accommodation: one-bedroom, two-bedroom and three-bedroom villas. The one-bedroom villa was perfect for my friend and me. It was spacious -- over 1,000 square feet -- with a separate living room, bedroom, closet and dressing area and even a special media room (the sofa there pulled out into a twin bed). The outdoor space was a great addition, with a private deck, plunge pool and private beach.

The bathroom was also spacious, with double sinks, a large shower that easily passed the TPG shower test (I'm 6 feet, 7 inches tall) and a private outdoor soaking tub. The bath and shower amenities were in large pump bottles, as the hotel is focused on eliminating single-use plastics. I also loved that the villa had a Nespresso machine with tons of capsules -- I hate when hotels skimp on these!

The deck area was expansive, with lots of comfortable seating, and having a private beach visible from my private pool was amazing.

The one negative of my villa was that the bed, though large, wasn't very comfortable. And it had a crunchy plastic covering that made annoying noises when I moved or shifted -- kind of like sitting on grandma's sofa. This wasn't a big deal at all, but it was noticeable nevertheless.

I was surprised that such a small resort had so many dining options. In general, I found the food to be solid, but not exactly mind-blowing. It was a treat to eat outside, especially at the Beachcomber Cafe. The French cuisine by Guy Martin (chef of the two-Michelin-star restaurant Le Grand Véfour in Paris) wasn't the highlight, though it was fun to hang out in the restaurant's wine cellar.

I much preferred tasting tuna ceviche while sipping mai tais and other tropical drinks.

Room service was always set up outside on the deck -- there's really nothing better than eating in front of jaw-dropping ocean views. There were plenty of healthy, vegan and vegetarian options available in general at the resort, which I appreciated, but perhaps what I loved the most was trying a different drink perfect for the beach each night.

Service from bartenders, waiters and all the staff in general was wonderful. They were around when you needed them and out of sight when you didn't. No one was overbearing, and everyone I encountered was friendly and helpful. In case I got tired of my private plunge pool, the resort also had a large swimming pool on the beach, which was completely empty the one day we used it.

If an overwater villa is what you're after, The Brando won't be for you. But the resort has good reason to not have overwater villas. Because it prides itself on sustainability, creating beach villas (as opposed to overwater villas) puts less pressure and inflicts less damage on the natural surroundings. A true ecoresort, The Brando utilizes seawater-based air conditioning, solar energy, solar heating for hot water and even coconut oil for energy.

During my stay, a Race for Water boat pulled in, and we got to explore it. The fully sustainable boat uses 70% solar energy, 20% wind energy and 10% hydrogen, and is navigating the world for four years.

The Varua Polynesian Spa had a variety of treatments, plus a steam bath, a waterfall, a tea lounge and the Fare Mana, a special relaxation area.

One of the best (or worst, depending on your personality) things about this resort was that there wasn't really a lot to do. You could canoe or kayak, play tennis and ride bikes around the island -- which I did pretty quickly, since the island is so small (less than two and a half square miles). In general, though, there wasn't a whole lot to do besides eating, swimming and lounging around -- no Jet Skiing at this ecoresort. There wasn't any "scene," the restaurants were never crowded (except the hibachi restaurant, which booked up quickly), and there wasn't anything else on the island other than the resort (and the stunning nature).

The snorkeling wasn't all that great, as the reefs were small and the water shallow. Compared to Bora Bora, though, I noticed a lot less fish and underwater life (because it's a barrier island). Activities like boating and diving were very weather-dependent, and I found this out firsthand.

I found the diving to be just OK -- in order to do it, you had to go through a very small channel. I was warned that if the weather didn't cooperate or the water got any rougher than it already was, we wouldn't be able to re-enter the channel after our dive. Instead, we would have had to take a boat ride for several hours to get back from the dive site. Considering the dive wasn't all that spectacular, it really wasn't worth it. Bottom line, this wasn't the best place to dive.

Bora Bora really blew it away with its diversity of sites and marine life (like mantas!). The resort also only had one dive instructor, so make sure to book in advance if you really want to dive, as availability is limited and you never know what might happen with the weather.

Although my stay at the Brando was expensive, I had a wonderful time, and it was the perfect place to hide away in privacy for a few days and disconnect. That being said, if you're someone who loves activities or a social scene, this isn't the right place for you -- it's better for honeymooners, solo travelers writing a book (looking at you, Barack) or those who really need to get away from it all.

If I go back to French Polynesia again, I'd visit Bora Bora so I could hike and do other, more social activities in addition to relaxing. All in all, though, I'm so happy I got to experience The Brando, and would certainly recommend this resort to anyone if budget is no issue. If you value privacy and top-notch service, all at an unforgettable place, then you can't go wrong with a stay here.

Related stories
Newark's gorgeous new terminal just got delayed into 2023
The best credit cards for paying your cellphone bill
Why you should consider having both the personal and business Amex Platinum cards
Real ID requirements for air travel in US delayed until 2025
Featured image by Photo courtesy of Brian Kelly/The Points Guy
Editorial disclaimer: Opinions expressed here are the author’s alone, not those of any bank, credit card issuer, airline or hotel chain, and have not been reviewed, approved or otherwise endorsed by any of these entities.