Articles
Summer Hull , aka Mommy Points, ran the Mommy Points site for families who want to travel more for less using miles and points for seven years. She now heads up a variety of special projects at TPG when she isn't exploring the world with her own two girls.
Follow
April 13, 2019
•
7 min read 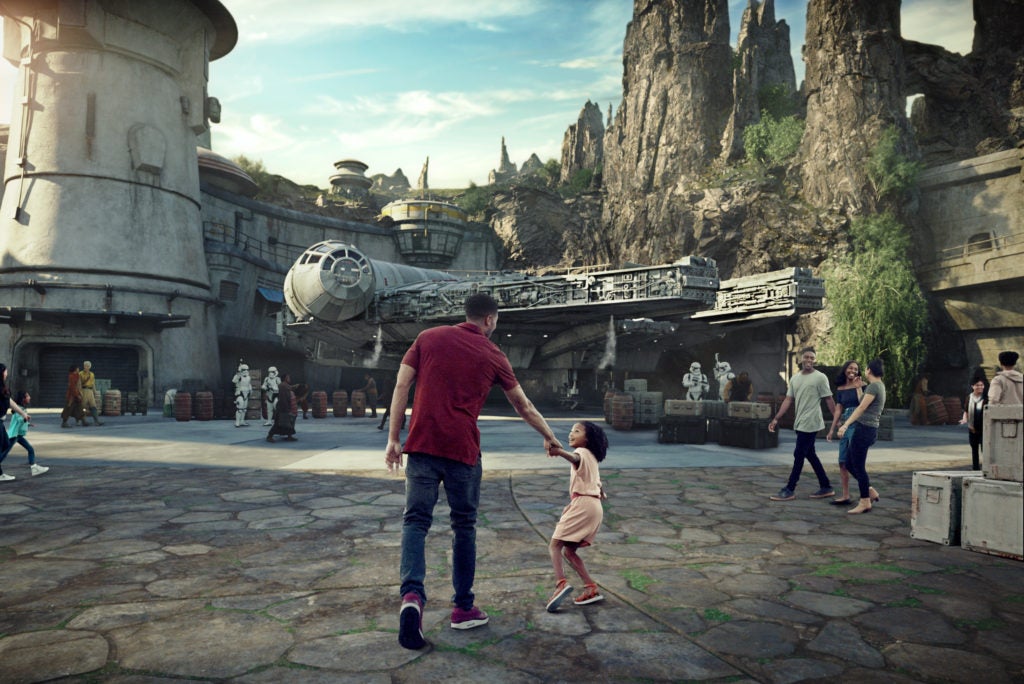 5 Things We Learned Today About Star Wars: Galaxy's Edge -- And a Crucial Missing Detail
This post contains references to products from one or more of our advertisers. We may receive compensation when you click on links to those products. Terms apply to the offers listed on this page. For an explanation of our Advertising Policy, visit this page.

The opening of Disneyland's Star Wars: Galaxy's Edge is just a few weeks away. While we know the opening dates, where to stay to guarantee you can get in during those early weeks, what they are serving (blue milk, amongst other things) and that yes, there will be bathroom passes available during the wait to ride the attractions (yes, really), there is plenty we don't know.

Luckily, this is the weekend of the Star Wars Celebration being held in Chicago, so a few more secrets have been unlocked from the vault. The multi-day event is a coming together of not only Star Wars fans, but also those who help make the magic happen in the form of films, books, games and even theme parks.

At this fan-filled event, there was not only a troop transporter car from Disney's Rise of the Resistance ride (complete with an R5 unit) available for oohing, ahhing and photo opportunities, but there was a 90-minute live-streamed panel with Disney's "Imagineers" hosted by Josh Gad (from Frozen's Olaf fame). The discussion centered around all things Galaxy's Edge from the folks who actually designed it. Here are five things we learned about the new land, and one thing we still are dying to find out.

Yoda is in Star Wars: Galaxy's Edge -- and he talks.

We learned that Frank Oz reprised his role as the voice of our favorite little green Jedi for Galaxy's Edge. In fact, many of the actors who voice the Star Wars films will be heard in the new land. Speaking of sounds, there's also all-new John Williams music to be heard throughout the land that was previewed at the event. The immersive impact of music and sound in theme park lands and rides cannot be underestimated.

You really can fly the Millennium Falcon.

This wasn't truly new information, but we heard more about the roles you can play in the new ride, Millennium Falcon: Smugglers Run. This is the only new Star Wars ride that will be available on Day 1 when the land opens. Smugglers Run is not going to be an attraction where you just strap in and watch the show. You will have an active role as either a pilot, gunner or engineer (who has to fix the trip if the pilot is a bit rusty).

Not only that, but the ride's exit will show signs of damage if your flight was a rocky one.

The Play Disney Parks app will allow you to interact with the land.

If you have been to the Wizarding World of Harry Potter at Universal Studios, you know that a magical wand can bring to life some special features in that land. At Star Wars: Galaxy's Edge, you will also be able to interact with elements in the land with no wand (or blaster) required. All you'll need is the Play Disney Parks app to scan and see what's inside crates, translate the unique Star Wars language to English, and eavesdrop on various stories happening in the land with a special "tuning" tool.

Even the sodas are themed.

Don't expect to walk into Galaxy's Edge and buy a regular old t-shirt or soda. Everything in the land is said to be themed as if you were actually on a Star Wars planet, so even the Cokes look different. Gimmicky? Absolutely. Still pretty cool? 100%.

Does it look like a droid, a thermal detonator, or a planet? I don't know, but I'll probably pay the $8 or whatever out-of-this-world price they charge to find out.

Your choices dictate which side you are on.

Jedi or Empire, First Order or Resistance, whatever you want to call it, there's always a light side and dark side in Star Wars (and on this truly insane Star Wars-themed United Airlines livery). While details are still a little light (pardon the pun), your actions and choices inside Galaxy's Edge will be tracked and will influence if you are one of the good guys, or have a bit more Sith in you. This personalized experience could be accomplished with a Magic Band at Disney World, but since Magic Bands aren't (yet?) a thing at Disneyland, perhaps this job falls to the app.

We still don't know how to make a reservation to get into Star Wars Land.

I was very much hoping this was the day we would learn how to actually make a reservation to get into Galaxy's Edge, but Disney is still holding that info under lock and key. From opening day on May 31, until June 23, you need a reservation to get into Galaxy's Edge, in addition to regular theme park admission. We know that a reservation at one of the three official Disneyland hotels (Disneyland Hotel, Grand Californian and Paradise Pier) will guarantee you a chance to visit Galaxy's Edge once during your stay, but we still don't know anything beyond that.

After getting a sneak peek at Galaxy's Edge, Josh Gad said, "It is beyond your wildest dreams. It is the single most insane thing I’ve ever seen built in any park." If Olaf says it, it must be true. Here's hoping we soon learn how to make a reservation to walk into the Star Wars universe ourselves since opening day is just around the corner.

Read on to plan your own trip to Disneyland and Galaxy's Edge:

Our points-obsessed staff uses a plethora of credit cards on a daily basis. If anyone on our team wouldn’t recommend it to a friend or a family member, we wouldn’t recommend it on The Points Guy either. Our opinions are our own, and have not been reviewed, approved, or endorsed by our advertising partners.
See all best card offers
Related stories
News
Here's how many Marriott Bonvoy points it will cost you to score Super Bowl LVII tickets
News
Etihad will bring back its ultra-luxurious Airbus A380
Guide
Get more from your points with these transfer bonuses
News
American unveils additional long-haul flights for summer 2023