New video: Watch us fly the Singapore Airlines A350 in all 3 cabins

Articles
Nicky Kelvin is the director of content and face of TPG UK, and is also an award-winning photographer. Before joining TPG UK, he was a record label lawyer and avid traveler sharing points wisdom as the "Miles Mogul."
Follow
Aug. 08, 2022
•
4 min read 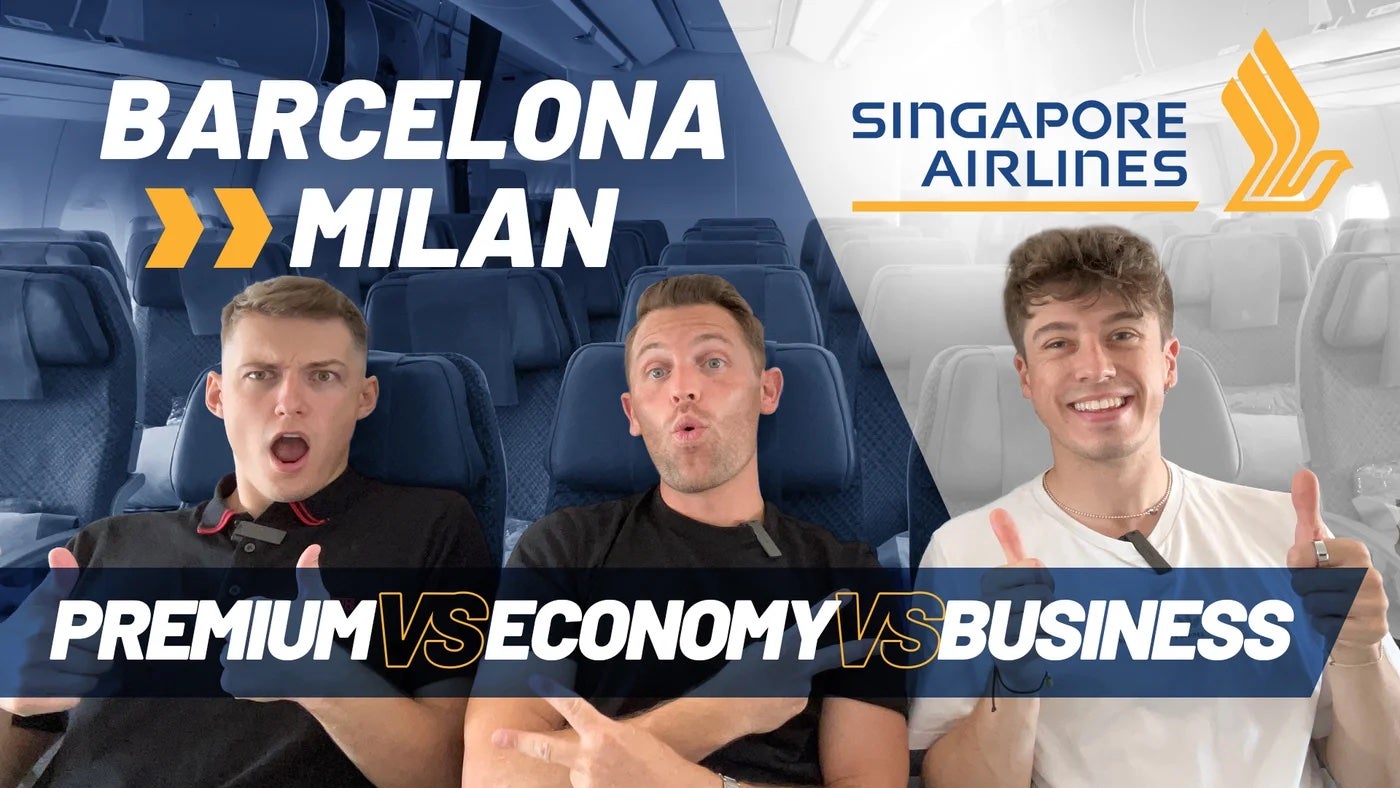 Every so often there’s an intersection between AvGeek obsessions that offers up undeniable money-saving opportunities.

Firstly, there's the enticing intrigue of a fifth-freedom route. Fifth-freedom flying (one of the nine “freedoms of the air”) allows airlines to fly between two third-party countries that are not their home. These flights are often very reasonably priced as they are not usually fully booked; they can also sometimes fly at less attractive times and non-daily frequencies.

Secondly — in this instance — comes the appeal of a wide-body jet belonging to an airline deemed one of the best in the world.

Earlier this year, Singapore Airlines announced it would be launching a new fifth-freedom flight between Barcelona and Milan serviced by its Airbus A350-900 jets. We were eager to get on board — and what better way to cover the entire experience than by trying out each of the three classes available on this aircraft at the same time?

We even took a special guest with us this time. Along with Liam and I (who were seated in business and economy class, respectively) was Adam Mach, a prolific Czech YouTuber and AvGeek.

Watch the full video below:

Need more? Read on for a breakdown of our individual experiences aboard Singapore Airlines’ A350 service.

It was a thrill to fly such a luxurious product on a route this short. The seat itself was extremely comfortable, and I enjoyed its unique design compared to other business-class products.

The crew members handed me a glass of Champagne shortly after I sat down, and they were attentive and friendly throughout. I was impressed at how quickly they were able to serve and clear away a full meal service on this one-hour hop.

Every item included with the seat was of the highest quality. From the bedding and pillows to the noise-canceling headphones, Singapore Airlines ensured all the amenities were of the premium quality you’d expect on a business fare.

However, the seat could have been a little comfier after it was folded out into a bed. The stairwell was fairly narrow, meaning my feet were at quite an awkward angle in the fully flat position, and the bed itself was a bit firm for my liking. The meal was also sadly a little disappointing for business class. There weren’t many options to choose from, so I opted for a smoked salmon and cream cheese sandwich. It was by no means inedible, just underwhelming.

As this was my first time flying a premium economy product, it really surprised me what an upgrade it actually was from regular economy.

The minicabin of three rows offered enough intimacy for a peaceful flight with quick service. The flight lasted one hour, so I was only given a croissant which left me wanting a little more of Singapore Airlines’ supposedly brilliant catering.

My seat, 33K, was really comfortable and also reclined well. Together with an uplifted footrest, it created a great seat — comfy enough even for long-haul flights, which the plane also operates on a daily basis.

The pillow provided was huge, but the blanket was a little bit on the thin side.

For an economy product at such a low price point within Europe, this experience was unbeatable. The flight was a similar price to those of other carriers, even the low-cost options, but the experience with Singapore Airlines included free food, a large comfortable seat, a spacious cabin and inflight entertainment.

Even though the flight was short, the Singapore Airlines crew was able to give a taste of what a long-haul flight with the airline is like. Because the cabin was so large, it also meant there were free seats, and I was able to stretch out in a way that is never normally possible within Europe.

Featured image by Featured photo by The Points Guy.
Editorial disclaimer: Opinions expressed here are the author’s alone, not those of any bank, credit card issuer, airline or hotel chain, and have not been reviewed, approved or otherwise endorsed by any of these entities.