What’s the best way to view the northern lights? We tried to see them by air, land and sea

Articles
Nicky Kelvin is the director of content and face of TPG UK, and is also an award-winning photographer. Before joining TPG UK, he was a record label lawyer and avid traveler sharing points wisdom as the "Miles Mogul."
Follow
July 21 2022
•
6 min read 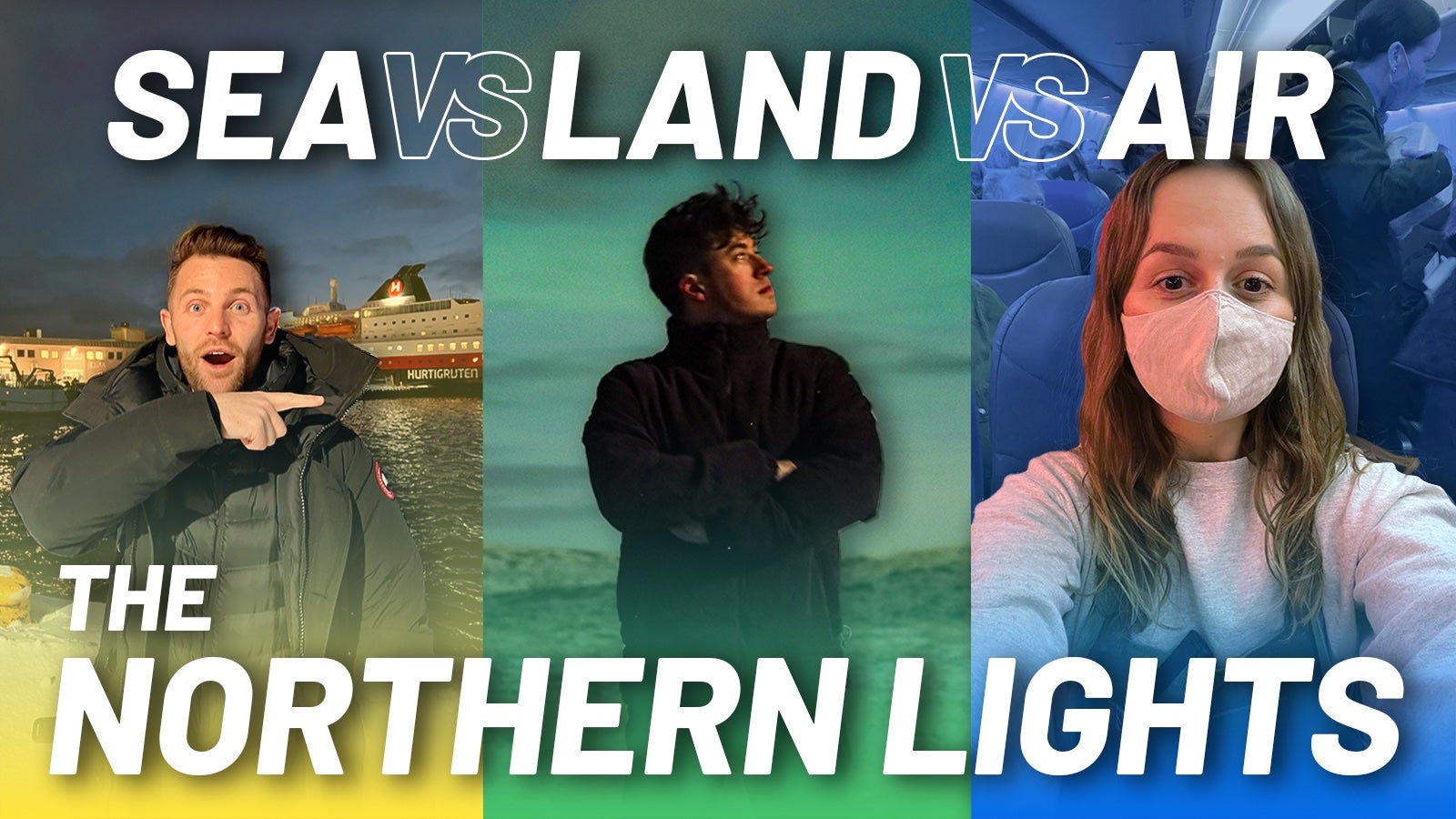 Tired of this sweltering, sold-out summer? TPG U.K. is on hand to cool things down.

Instead of trying to squeeze in a last-minute summer vacation, we recommend looking at trips later in the year when the industry is likely to be better staffed and the prices could be lower. Imagine, for example, a journey to see the northern lights, a magical winter experience you can book now for later in the year.

In true TPG U.K.style, we compared three very different ways of seeing the northern lights: by sea, by land and in the air.

Nicky Kelvin traveled to Norway and boarded the Hurtigruten Coastal Express ship to see the lights from the sea in the Arctic Circle. Liam Spencer flew over to Iceland, picked up a car and drove into the depths of this island nation to see the lights from Hotel Rangá, a remote luxury lodge. Finally, Izzy Cooper boarded a special Jet2 charter that would fly north to try and catch an air-to-air sighting of the northern lights from a dimmed aircraft cabin.

You can watch the whole experience and find out which experience came out on top right here on YouTube:

Seeing the northern lights by sea in Norway

With direct flights to Tromso, Norway, from the U.K., Nicky said reaching the starting point for the journey was very easy.

The Hurtigruten Coastal Express really did feel like the perfect way to see the lights. The ship was incredibly cozy and comfortable and provided easy access to viewing decks outside.

As soon as the negative 20 degrees Celsius temperatures became unbearable (about minus 4 degrees Fahrenheit), the warmth inside was only a few steps away. The food and additional land excursions were excellent and made for an all-around exciting adventure in a stunning setting.

Cabins were set up with northern lights forecast monitoring and the option to set a wake-up alarm if the lights were sighted. In the earlier hours of the evening, the entire ship was notified of sightings of the lights, and the show the skies put on while we were on board was magical.

If you don’t like being at sea, this experience might not be for you. Also, you won’t find high-end luxury here as you might on some cruise lines.

Seeing the northern lights by land in Iceland

The Hotel Ranga was a real gem of a property and it made the experience of seeing the northern lights feel even more special. The hotel was full of unique features, including a stargazing observatory, cabin-like rooms and hot tubs with a backdrop of the Icelandic landscape.

The flight from London to Reykjavík is only three hours long and there are plenty of options when it comes to airlines.

Iceland has natural beauty everywhere you looked. From the Seljalandsfoss waterfall to the Kerid Crater, Liam said being able to drive from landmark to landmark meant that even when he wasn’t chasing the northern lights, the trip was still enthralling.

On the downside, he only managed one glimpse of the northern lights during his visit. While it was magical, it would have been great to see them for an extended period of time.

This isn’t a cheap trip if you’re going alone, either. The cost of flights, hotel nights and a rental car add up.

Seeing the northern lights by air in the UK

Omega Breaks offers this tour from several airports around the U.K. from late October to mid-March, so you’re almost guaranteed to find a date that suits you.

The whole process was very easy and straightforward to navigate.

Simply park at the Radisson Blu, enjoy a drink in the hotel lobby, attend the astronomy presentation and then take a short walk to the airport terminal, where you immediately check in. Then it’s through security before heading straight to the gate to get on the flight.

We flew on a 737-800 which felt new and very clean. As soon as you land, you take a side exit through the airport and are driving home in no time.

It wasn’t all great, however.

The inflight experience was stressful. You're required to swap seats with the people in your row every five minutes once there is a good view of the stars or lights. This promises that everyone gets a window seat. The plane is pitch black inside, however, so people were bumping into each other and belongings were lost.

Some people didn’t have a window in their row either, which meant six people were swapping around for one window seat, and that was very chaotic. One customer even refused to move seats as he was so disgruntled with the setup.

Absolutely no lights can be turned on during the observation period. If you’re looking to get some great shots or something for your Instagram, this isn’t the excursion for you.

Related stories
First, Club Suite and the rest: Flying the British Airways 777 in all 4 cabins
10 best hotels to see the northern lights
You won’t want to miss New York City’s newest immersive art space
New welcome offers: Earn up to 150,000 points on these Marriott Bonvoy credit cards
Featured photo by TPG NorthernLights Sea Vs Land Vs Air
Editorial disclaimer: Opinions expressed here are the author’s alone, not those of any bank, credit card issuer, airline or hotel chain, and have not been reviewed, approved or otherwise endorsed by any of these entities.