11 therapy dogs — and a pig, cat and rabbit — are calming pre-flight stress at SFO

Articles
Bill Fink is a senior writer for The Points Guy covering travel news, trends, and cool adventures. His award-winning stories have been featured in AARP, BBC Travel, Frommer's, Lonely Planet, National Geographic, Outside, Yahoo Travel and many others.
Follow
July 30, 2022
•
9 min read 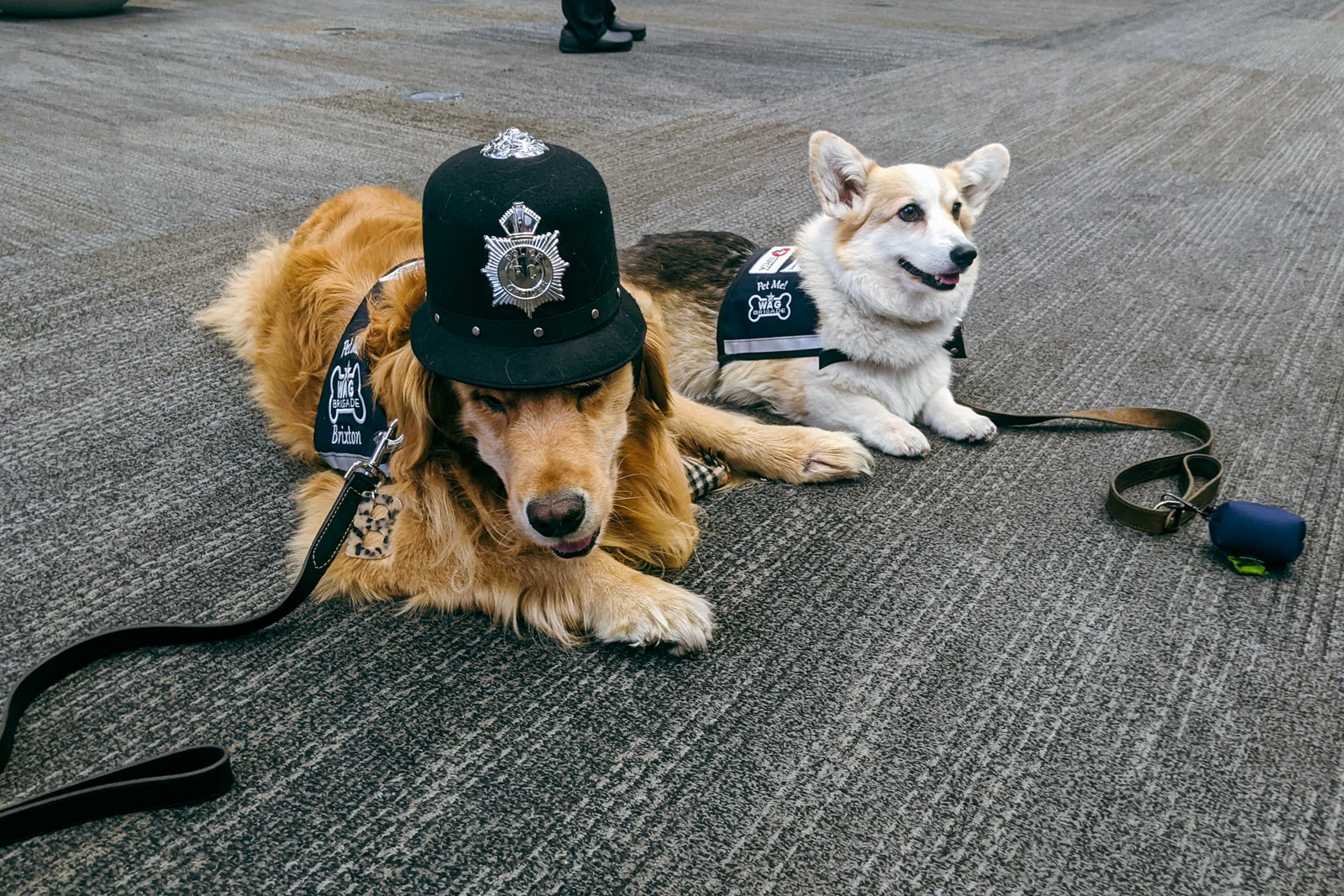 In a year filled with delayed or canceled flights, lost luggage and continuing pandemic concerns, therapy dogs at San Francisco International Airport (SFO) are taking an active role in reducing travel stress, one belly rub at a time.

Wearing SPCA-branded vests that read "Pet me," the 14 members of SFO's "Wag Brigade" patrol the terminals with tails wagging, offering a calming and comforting influence to passengers, airline crew and airport employees alike.

SFO created the Wag Brigade in 2013, according to Jennifer Kazarian, founder and manager of the popular program.

"We had noticed a trend with a few other airports that had started similar programs," she said.

Now the SPCA-certified therapy pet program at SFO has grown to include other animals, including LiLou the pig and Alexander the Great, a 28-pound rabbit. Even Tristan, a handicapped bulldog with partially paralyzed back legs, can be seen wheeling through the airport.

TPG recently stopped by SFO to see how the Wag Brigade and its handlers work their magic in reducing airport stress.

The Wag Brigade in action

On the day of my visit, Brixton the golden retriever and Lia, a Pembroke Welsh corgi, were on duty in SFO's Terminal 2. A steady stream of passengers, airline staff and airport employees stopped to pet, coo and play with the friendly dogs, who patiently sat for dozens of affection sessions.

Lia the Corgi is a fat little furball of comfort, remaining still for pats from adults and children alike, all the time keeping her eyes on her handler for more treats.

The dogs are calm, well-behaved and obedient to commands. Handlers must pass an extended background and security check by the airport, as they tour with the dogs past the TSA security entrances.

Lia even performed a few tricks to the delight of some passengers, offering high fives and spins on command. She culminated her performance with a treat-on-the-snout-balancing trick.

Young kids cautiously approached, first offering a tentative pet, then going into full snuggle mode while the dogs reveled in the attention. Some passengers who appeared to be having a rough day dropped their bags, sat down cross-legged and just hugged the dogs.

"Are you having a better day now?" Linda Gordon, Brixton's owner, asked one teen boy. He shyly smiled and nodded.

"Brixton is like the Doggie Lama," Gordon said. "He can just sense when people need to be comforted, and goes right to them."

Brixton was truly born to be a therapy dog, beginning the SPCA certification process when he was just 8 months old, about when the program began in 2013.

"His philosophy is 'Heal the world one lick at a time,' and [he] accepts payment only in the form of belly rubs," his handler said.

Brixton, dressed in an English police helmet and British scarf (he was born in England, according to Gordon) calmly waits for people to approach. But he comes to life with tail wags and licks when people pet him, rolling on his back in the hopes for a belly rub.

"When people pet him it's like an 'on' switch," Gordon said.

LiLou the pig is restricted to carpeted areas due to wear on her hooves.

Finding the pets can be a challenge, as no schedule is posted. They tend to move where they're the most needed and appreciated as the day goes on — not to mention, they often get ambushed for extended petting sessions en route to targeted parts of the airport. However, you can subscribe to Wag Brigade Instagram page @sfowagbrigade for location updates. Fans can even follow individual members like @brixtonatlarge and @corgi.lia.

Kazarian says the therapy animals have a powerful positive effect on passengers.

"You never know why people are traveling, [and] not everyone is traveling for positive reasons. We meet people who are traveling to funerals, on military order, leaving home for the first time or returning from having lost a job," she said. "We also meet lots of people who’ve recently lost a pet or can’t have a pet. They all love meeting the dogs."

Gordon talks of the time Brixton pulled on his leash to seek out a specific older woman sitting alone in a seat. The woman burst into tears and hugged Brixton, having recently lost her own dog.

The pandemic was a tough time for these therapy dogs as well, with SFO's program suspended for 20 months from 2019 until 2021.

"Brixton felt lost during COVID without all those daily pats; he missed his friends! " Gordon said. "We ended up just walking around the streets of San Francisco offering folks some comfort."

Brixton and the other therapy dogs also participate in other programs in area schools (especially during finals time) and retirement homes.

Do the dogs enjoy their jobs?

"If he could live here, he would," Gordon said of Brixton. "I literally have to drag him out at the end of the day, and he pulls back on the leash like 'Wait, there's still more people I need to help.'"

It's not just passengers who find comfort in the therapy animals. Airline crews and airport employees are some of the more enthusiastic fans of the Wag Brigade at SFO, knowing many of the animals by name. ("Oh, Brixton's back!" said one TSA staffer walking by.)

United Airlines' Alyssa Sanchez and Matt Nardza stopped for an extended meet and greet with Lia. Shortly thereafter, an airline pilot stopped to offer Brixton some pats — and jokingly offered him a job as his copilot on an upcoming flight.

Related: What you need to know about traveling with a dog on a plane

Therapy pigs, rabbits, and next up, a llama?

Now it's more than just dogs patrolling SFO's airport with the Wag Brigade — a pig, cat and rabbit have all joined the program, with more species on the way.

"Any animal that's well behaved and enjoys people is welcome," Kazarian said. "We did have a 110-pound mini horse on the team and we have another mini pony currently interested. Right now I’m trying to recruit a mini llama and a turtle. We've even had two full-size horses interview with us."

In addition to the 11 therapy dogs, SFO's Wag Brigade also consists of LiLou, a Juliana breed of pig, as well as a giant rabbit and Duke Ellington Morris, a tuxedo cat.

The program is always looking for new volunteers. Kazarian looks for animals "with stable temperaments, friendly personalities, impeccable manners, and [which] are very obedient. It is especially important that the animals are good with children, seniors and can handle loud noises."

Wag Brigade dogs are required to pass a Canine Good Citizen Test. Additionally, all of the animals must graduate from the San Francisco SPCA’s Animal Assisted Therapy program and must have between six months and one year of successful therapy experience working with other organizations prior to their evaluation and audition at the airport.

How about that therapy bunny? Alex the Great, a 28-pound Flemish Giant rabbit with a "one-in-a-million type of personality" hops along the hallways of SFO to the delight of passengers. The SPCA-certified therapy rabbit is a San Francisco celebrity; he also serves as the San Francisco Giants' official Rally Rabbit and makes appearances as the Lucky Rabbit Foot for the Golden State Warriors. The Flemish Giant breed of rabbit is known for being docile, patient and sociable with people. Alex is no exception, sitting for endless petting sessions with travelers.

San Francisco is not the only airport location providing therapy animals. The first therapy dog program started at San Jose International Airport (SJC) in 2001 following the 9/11 attacks. SJC's airport pastor had been bringing his dog to work, and he discovered his pet was working wonders in calming passengers during a stressful time. Shortly thereafter, the airport began a formal therapy animal program.

In the decades since 9/11, dozens of airports have introduced therapy animal programs, both as regular passenger services and for periodic special events. Prior to the COVID-19-related suspension of many of the programs, Vane Airport Media reported there were 85 airports in North America offering some kind of therapy animal visits.

While most airport therapy animal programs offer only intermittent and irregularly scheduled visits, you can often find announcements on airports' social media channels, and on the (often A-list celebrity-status) Instagram pages of the popular pooches, ponies and pigs.

Featured image by (Photo by Bill Fink/The Points Guy)
Editorial disclaimer: Opinions expressed here are the author’s alone, not those of any bank, credit card issuer, airline or hotel chain, and have not been reviewed, approved or otherwise endorsed by any of these entities.