Articles
Ashley Kosciolek has spent more than a decade writing about travel, with particular emphasis on cruises. Her favorite cities include London; Amsterdam; Krakow, Poland; Phnom Penh, Cambodia; Dawson City, Yukon; and anywhere known for outstanding pizza and theater. You can follow her daily exploits, both at sea and on land, on Instagram or Twitter @slyjabroni.
Follow
Jan. 23, 2023
•
8 min read 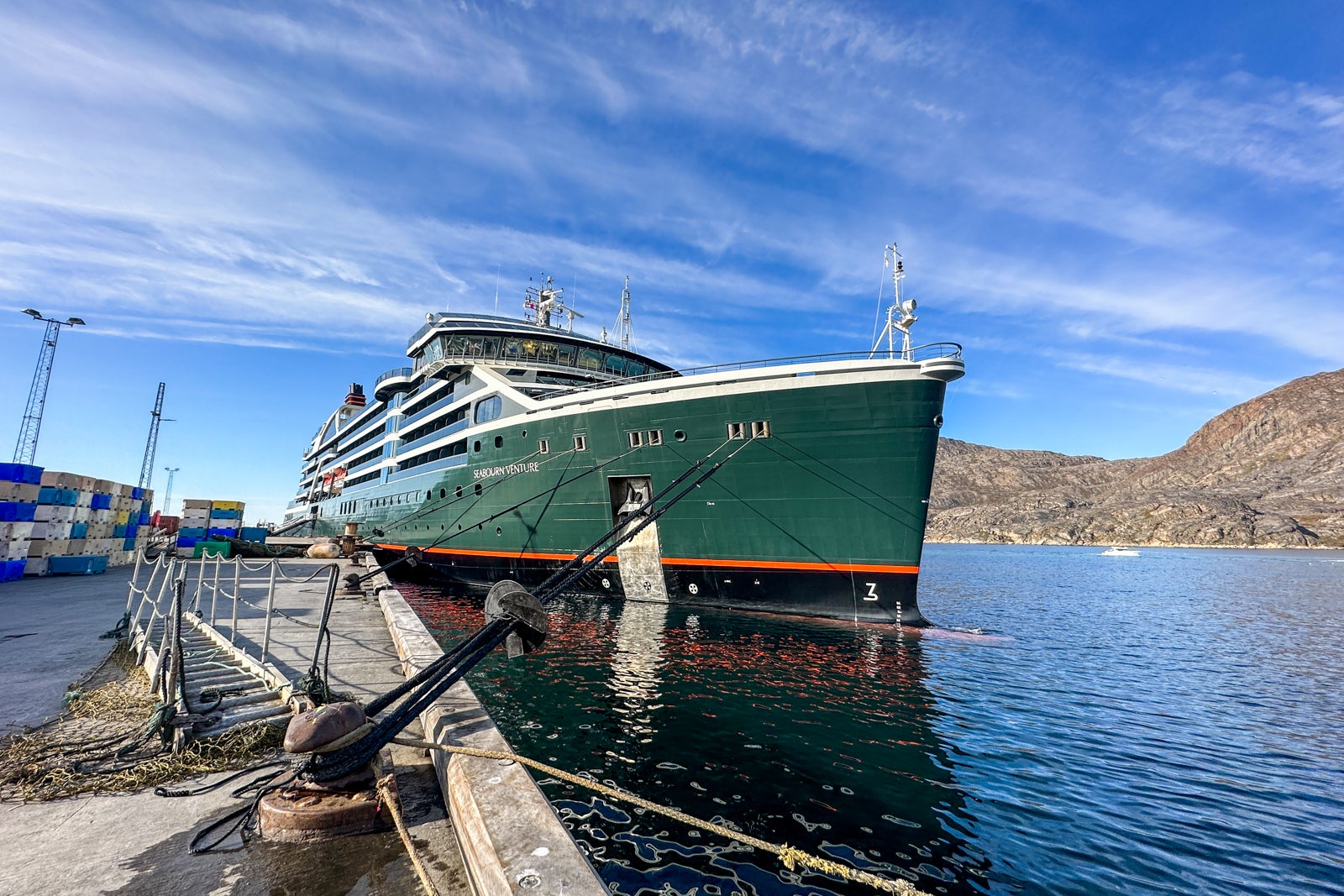 New expedition ship Seabourn Venture will head into dry dock for nearly a month this spring at the conclusion of its Antarctica season. The hiatus will allow for repairs to the ship's stabilizers, which are currently malfunctioning. All of the vessel's April sailings have been canceled.

"Seabourn Venture will be undergoing dry dock maintenance to conduct repairs to the ship's stabilizers," Seabourn Cruise Line said in a letter sent to travel agents last week. The letter noted that the line would be scrapping the vessel's scheduled voyages departing April 7, 18 and 30, which include the Amazon and Western Europe.

The ship, which debuted in July 2022, has been sailing without working stabilizers — mechanical arms that extend out from the ship, below the water, to minimize movement in choppy seas — since December. The lack of stabilization has been problematic for the line's Antarctica season, which involves crossing the notoriously rough waters of the Drake Passage.

The following voyages will no longer be sailing, due to the dry dock:

Seabourn is issuing booked passengers full refunds to their original forms of payment for cruise fares and add-ons — such as airfare, pre- and post-cruise hotels, transfers, shore excursions and spa reservations — purchased through the cruise line.

Refunds will be processed by Jan. 26, and the money should appear within 10 to 15 days. (Passengers who paid with a future cruise credit will see the credit returned to their Seabourn account.)

Additionally, affected cruisers will be given a 25% credit toward a future cruise. The credit must be used to book either a cruise that departs by Dec. 31 or an add-on, such as flights booked through Seabourn or pre- or post-cruise hotel stays.

The line has also offered to reimburse reasonable nonrefundable expenses (airfare change fees, for example) on a case-by-case basis. Passengers wishing to submit requests for these types of reimbursements should fill out this form and submit any supporting receipts. Cruisers should only do this after submitting a claim to their third-party travel insurance (if they purchased a policy).

Can the ship safely sail without stabilizers?

TPG contacted Seabourn in early January to ask whether Seabourn Venture would continue to sail with malfunctioning stabilizers. The line said yes after verifying with experts that it was safe to do so.

"The ship is designed to safely sail with or without the stabilizers," Seabourn told The Points Guy in a statement. "...we consulted with [the] vessel's class authorities and the system's manufacturers, who confirmed the vessel is cleared to safely sail.

"We are continuing with our voyages to Antarctica this season through March 2023.

"Our Fleet Operations Center is carefully planning each route and timing for the smoothest possible sailing. We will manage the timing of crossing through the Drake Passage to take advantage of the most optimal weather windows."

What happens when a ship's stabilizers don't work?

When stabilizers fail to operate properly, it means you could be in for a less comfortable ride if the seas aren't calm. When waters are rough and stabilizers aren't available to cut down on the ship's rolling, the captain could be forced to reduce speed. If a ship can't make its scheduled calls on time due to slower sailing, that could, in turn, lead to itinerary modifications.

In Seabourn Venture's case, the stabilization issues have already affected itineraries. A few frustrated passengers, including TPG reader Ronald Friedman, reached out about one sailing in particular.

Friedman was booked on the ship's 20-day Antarctica sailing on Dec. 14, 2022. He and other passengers found out on embarkation day that a planned visit to South Georgia Island was canceled, due to what the ship's captain initially said were weather-related issues, but turned out to be the nonworking stabilizers.

Passengers were offered the chance to disembark before the ship set sail but were told they wouldn't receive a refund. With the most basic cabins costing tens of thousands of dollars per person, Friedman said most of the people booked on the sailing felt obligated to stay.

"I still don’t understand how we could be expected to cross the Drake Passage twice, and very uncomfortably," Friedman said, referring to one of the world's most choppy waterways, which cruise ships must traverse to reach Antarctica.

Sailings that include South Georgia Island are generally twice as long and twice as expensive as standard voyages to Antarctica, meaning passengers on Friedman's cruise overpaid for the experience they actually received.

Passengers who chose to sail were offered only $1,000 in onboard credit and 15% off a future cruise. In most cases, cruise lines do not owe passengers any compensation for itinerary changes. This is especially true if changes are weather-related. However, exceptions are often made for voyages that are significantly affected by mechanical failures, which are usually seen as the responsibility of the cruise line.

"Those of us who travel frequently understand there are unexpected events but expect that, when dealing with a company like Seabourn, there would be fair and adequate compensation provided when an itinerary is so drastically changed," Friedman said. "The sole reason my wife and I chose this Seabourn Venture voyage was that it ... included a South Georgia Island experience on the itinerary."

Normally, it's not a good idea to book a cruise for any specific port because itineraries can change without notice. Although expedition cruises open themselves up to itinerary changes due to the unpredictable nature of some of the remote locations they visit, they also provide a chance to see places that are only reachable by ship. When a particular highlight falls through, fewer substitutions are available, meaning that a once-in-a-lifetime itinerary can quickly become something less impressive.

What it ultimately comes down to, though, is whether the changes result from uncontrollable events like weather or something like a mechanical malfunction that could be considered the cruise line's responsibility — and whether passengers are owed anything for their disappointment.

"We regret that we were unable to deliver on the original itinerary we promised to our guests," a Seabourn spokesperson said in a statement emailed to TPG. "The revised itinerary allowed Seabourn Venture to have additional time in the Falkland Islands and the Antarctic peninsula. The extra time enabled the ship to sail further south into Antarctica than any previous Seabourn ship, providing our guests with unique and intimate experiences."

What can passengers expect on the remaining Antarctica cruises?

"In advance of all other Antarctica sailings this season, we reached out to guests and travel advisors to advise them of the operational issue and offered them the opportunity to transfer to a future sailing on board Seabourn Venture or another Seabourn ship," the line told TPG in an email, but it mentioned nothing about refunds.

What you should remember if you're on a cruise ship with stabilizers that don't work is that it's still safe, even if it's not comfortable. It also might affect your itinerary. If you choose to sail, be sure to pack seasickness remedies, and try to remember that just about any day at sea is better than a day on land.