Articles
Tanner Saunders is a senior hotels reporter for TPG, a corgi dad and chicken fried steak fanatic. Originally from Texas, Tanner now lives in Brooklyn, but you are more likely to find him scouting out your next best home away from home.
Follow
July 26, 2022
•
8 min read 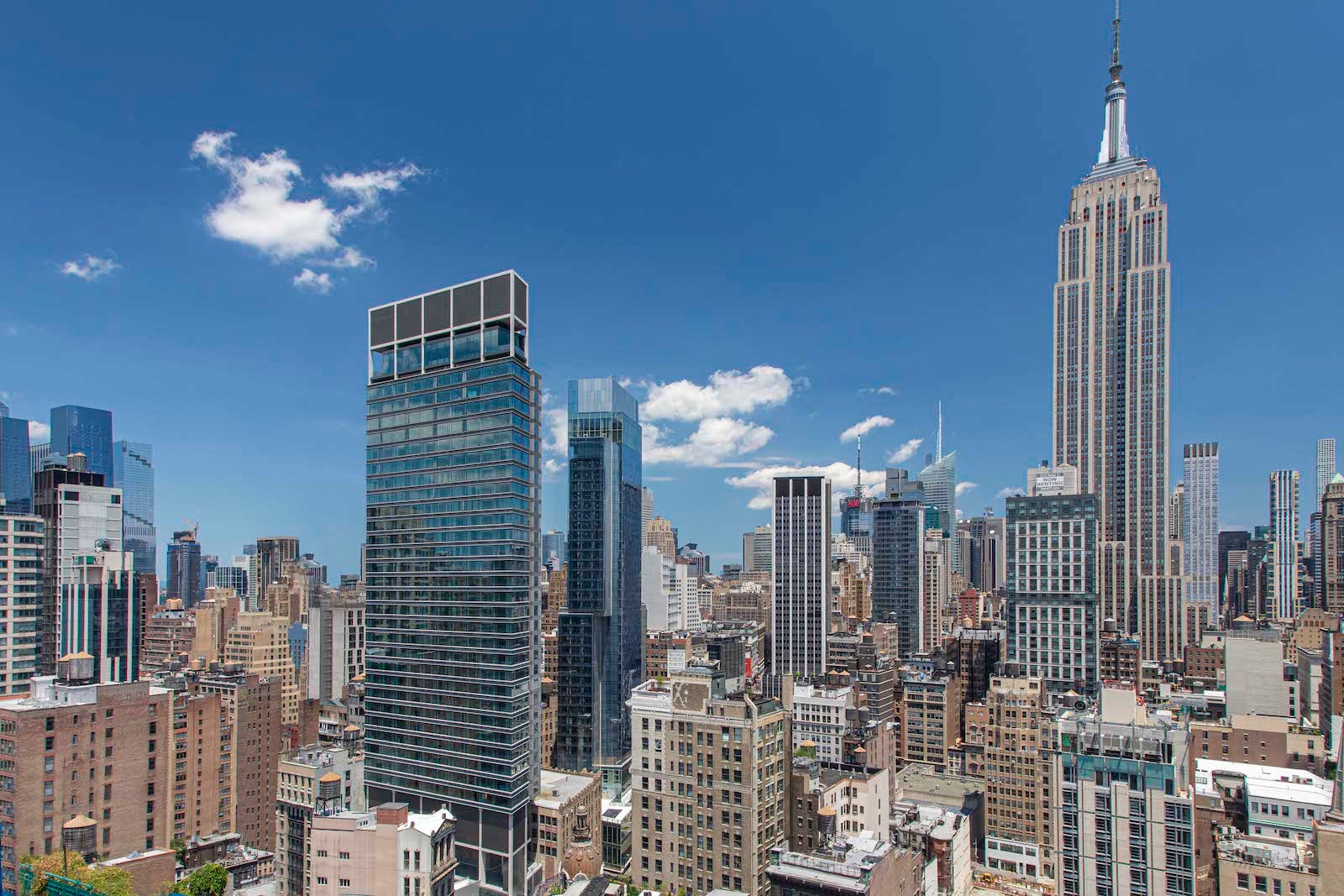 For months — years, really — I’ve been waiting for the day I was finally able to step into The Ritz-Carlton New York, NoMad, a towering, $500 million hotel that broke ground back in 2018.

And on Monday, July 25, the day before the hotel opened to the public, I got that chance when Bastian Germer, the hotel's general manager, took me behind the scenes for a tour of the Marriott Bonvoy-affiliated hotel situated between New York City's iconic Empire State Building and Madison Square Park.

Even though I haven't yet rested my head on one of those plush down pillows, this is, without a doubt, one of the most beautiful and modern hotels I've seen in New York City, even as the construction dust is still settling.

Potential visitors should know the hotel is opening at about 50% capacity and without a handful of dining and beverage facilities that will debut later this year. So, during my tour, I was able to see a few different room types, the restaurant, lobby bar and spa that would open the following day and the still-under-construction rooftop bar that will open in the fall.

As such, it was requested I refrain from taking photographs as the dozens of workers were performing a ballet of sorts putting together last-minute touches, perfecting lighting treatments, going over service details and riding the energy high that comes with the organized chaos of opening a hotel in less than 24 hours. The images you see in this article are professional photos provided by the hotel.

But I can tell you the photographs accurately reflect what I saw during my visit.

As Germer suggested during our tour, this new 50-floor Ritz-Carlton is a departure for the brand — a push forward, if you will — to bring a smarter, more modern type of luxury to the Ritz-Carlton portfolio.

Inside the new Ritz

Immediately on arrival, guests are ushered through a tunnel of lush greenery that leads to a dark lobby and seating area with a diverse assortment of patterns, textures and colors (hunter green velvet accent chairs, for example, and abstract works of art with a vague floral motif allude to the hotel's location in the city's Flower District).

In the background of the photo above, you can see the hotel's lobby bar, which will later be part of the José Andrés-led hotel restaurant, The Bazaar.

Beyond the entryway, guests, locals and passersby will find one of the most beautiful lobby bars in New York City. While I don't have images to share just yet, I can say my new Marriott Bonvoy Boundless Credit Card was burning a hole in my wallet just by me imagining myself, martini in hand, sitting under the massive light installation that felt almost like an old-school circus tent made from silk flowing from the ceiling.

It looked glamorous — and I felt glamorous just being there.

In another hat tip to its Flower District location, a flower cart hawking florals from nearby vendors is waiting by the main doors for guests.

Immediately off the lobby entrance sits the Rockwell Group-designed Zaytinya, an open and airy restaurant by aforementioned celebrity chef José Andrés. In contrast to the dark and moody lobby, Zaytinya is a bright, light- and wood-filled space with a massive bar featuring a curved wall unit that's sure to be a hit with New York influencers.

The menu will feature Mediterranean-style mezze dishes and cocktails inspired by the flavors of Turkey, Greece and Lebanon. Zaytinya is open for breakfast, brunch, lunch and dinner.

But the real star of the hotel's food and beverage offerings is Nubeluz, a 1920s-era bar on the 50th floor with floor-to-ceiling windows offering some of the most dramatic views of downtown New York I've ever seen.

While the site was still entirely under construction, the bones were impressive. In fact, I'd argue that on opening this fall, the Martin Brudnizki-designed space will instantly become one of the city's must-visit bars for the views alone. Think of it as Summit One Vanderbilt, one of the city's most popular observation decks, but with Spanish tapas.

In another nod to florals, the rooms feature "natural elements and textures that reflect the soft curvature of petals alongside sleek accents and lines."

Upon entering, you can't miss the impressive views of the Manhattan skyline. I instantly decided I wanted to live here.

The room was modern, bright and extremely comfortable. A large, rounded corner couch seemed like the perfect place to spend a few hours working on my laptop, an armoire in the corner opened to reveal snacks and drinks (such as Hudson Bright Lights, Big Bourbon whiskey), and a 55-inch television was mounted on a side wall so the incredible view remained the focal point. Floating chandeliers over the bed were the perfect finishing touch.

But for me, the real star was the bathroom. At this Ritz, every room category except for double rooms features free-standing soaking tubs, my second-favorite hotel amenity.

Many of the rooms, in fact, have tubs next to the window so you can soak in hot water while soaking in city views and Diptyque bath products. One could argue (and I probably will when I finally get the chance to experience that tub for myself) that it's one of the best bathtub situations in town.

But even if your room doesn't have the view, you can still bathe surrounded by dual tones of terrazzo marble, floating shelves and the calming effect of the effortless design.

What I loved most was that every room I saw, regardless of floor or category, had views that were unmistakably New York City.

All rooms face south over lower Manhattan, Germer explained, so there's really not a bad view. On the lower floors, I loved that I could see the World Trade Center in the distance but felt close to the surrounding neighborhood, too. Unlike many Big Apple hotels, this one feels hyper-connected with its surroundings — a hallmark of a great hotel.

Beyond that, I also got a glimpse into the gorgeous Ritz-Carlton Spa and Fitness Center, which has eight treatment rooms, plus saunas and steam rooms. You might want to book the signature Augustinus Bader facial that uses products from the brand inspired by the Flower District.

The gym was small but did have a solid mix of equipment, including a Peloton bike.

How to see the hotel for yourself

New York City is brimming with new hotels, especially on the luxury front — and just this week the Aman New York, one of the most highly anticipated hotels in recent years, started taking reservations for an early August opening date.

But despite the cash rates (from $1,073 for an entry-level king room on a low floor), travelers with a stash of Marriott Bonvoy points might find The Ritz-Carlton New York, NoMad is a relatively good deal.

Marriott Bonvoy members can book those entry-level rooms for 98,000 points per night. And remember, even those rooms offer an impressive view of the city.

That's comparable to The Ritz-Carlton New York, Central Park, and more affordable than The St. Regis, where the lowest rate using points in August is 106,000 per night.

And, of course, if you're visiting New York soon, you can always swing by for a cocktail in the lobby bar.

Related stories
The ultimate guide to earning elite status with United cards
American Airlines forgot it had landing slots at JFK. Then it lost some of them.
After 19 months, United Airlines is officially suspending flights at New York's JFK airport — again
17 ways to earn lots of Marriott Bonvoy points
Featured image by (Photo courtesy of The Ritz-Carlton New York, NoMad)
Editorial disclaimer: Opinions expressed here are the author’s alone, not those of any bank, credit card issuer, airline or hotel chain, and have not been reviewed, approved or otherwise endorsed by any of these entities.