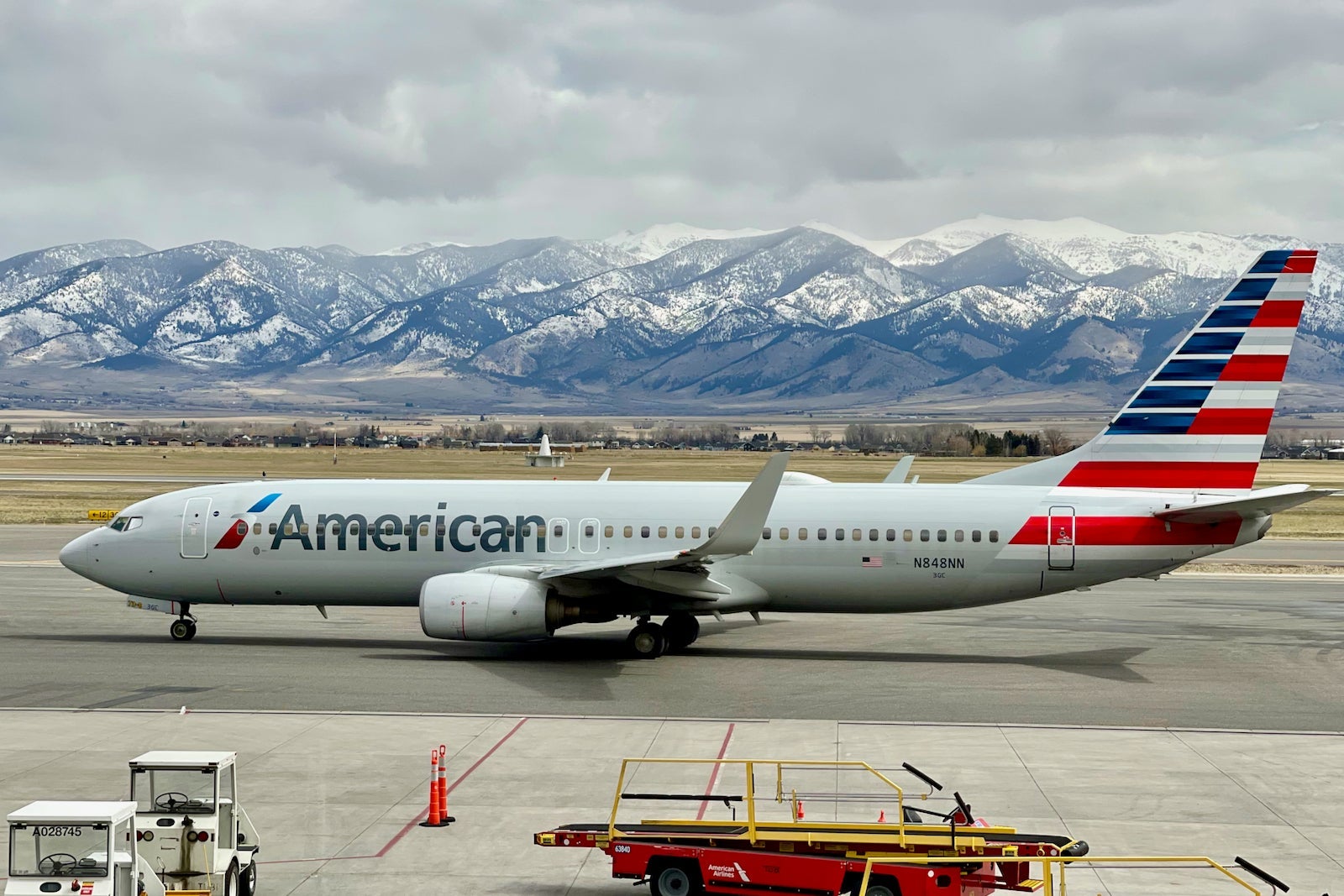 But today, we'll take a look at how three of TPG's Points and Miles staffers would redeem 1 million American Airlines AAdvantage miles. This is actually an interesting challenge as there is currently a unique limited-time opportunity to transfer Citi ThankYou points to American Airlines and there is some concern that American will move further toward a dynamically priced system in the near term.

Given all that, here's how each staffer would redeem 1,000,000 American Airlines miles.

Lie-flat seats around the world

American Airlines AAdvantage miles are incredibly versatile, with solid redemption rates and a slew of great partners. If tasked with redeeming a million AAdvantage miles at once, I'd plan out a handful of international trips.

Many of these trips are unrealistic at this exact moment given the pandemic's current state. But, in the hope for a brighter tomorrow, here's what I'd book in a post-pandemic world. Note that all bookings are for two passengers.

A quick trip from the US to Europe in first class

Here's what I'd book:

Note that the outbound flight price is lower than American's award chart. This is because the flight is a Web Special award, which is a discounted American award ticket. These awards are essentially the same as a saver award ticket except that they can only be refunded, not changed.

Next up, I'd book a trip to Hong Kong — one of my favorite cities — in Cathay Pacific business class. While I'd like to fly Cathay first class, award space is hard to come by for two passengers, which is what I'd want. I can book the round-trip business-class ticket for 140,000 American miles and $68.15 per person.

An adventure in South Africa

Finally, I'd book a trip to South Africa. My girlfriend and I planned to visit South Africa in 2020 but postponed our trip due to the coronavirus pandemic.

For this trip, we'd fly Qatar Airways' Qsuite business class from New York-JFK to Cape Town, South Africa (CPT), via Doha, Qatar (DOH), and return from Johannesburg (JNB). The itinerary costs 150,000 American miles and under $200 in taxes and fees per person, for a total of 300,000 American miles spent.

This brings me to a total of 984,000 American miles spent, with 16,000 left to spend. I'd use this to book a one-way ticket from New York (LGA) to Chicago O'Hare (ORD) in late 2022 for the holidays. The price of this ticket varies when Web Special awards are available, but I'm confident that an award will be available for less than 16,000 miles one-way.

Of the Big Three U.S. carriers, I find American Airlines miles to be the most valuable currency. That's because American offers a fairly consumer-friendly partner award chart. And although it's been moving away from award charts for its own flights, many American-operated flights have gotten cheaper with the introduction of Web Special awards. The carrier also still offers some lesser-known perks like off-peak pricing for certain regions.

Here's what I'd book with a million American AAdvantage miles:

Like Andrew, I'd redeem 150,000 miles for a round-trip business-class award on Qatar Airways to Cape Town (CPT). South Africa has long been at the top of my bucket list. And with cash fares for this ticket typically over $6,000, this is an excellent use of AAdvantage miles.

Qatar's Qsuite product offers some of the best business-class seats in the skies. Although I've seen them in person, I have yet to experience flying in them, so I've been itching to get that under my belt.

Next, I'd book a trip back to my favorite city in the world: Tokyo.

However, this won't be just an ordinary ticket to Japan; it will be for Japan Airlines first class. These awards aren't always easy to find, but they cost a very reasonable 80,000 miles each way — just a tad more than my business-class tickets to South Africa. The cash fare for this ticket is usually around $13,000 each way, so I'll be getting a stellar 16 cents in value per mile if you wanted to think of it in that way.

Although the seats may look a bit dated at first glance, the soft product is truly exceptional.

Highlights include Cristal Champagne, a multicourse dining extravaganza and luxurious amenities. I also can't wait to return to Japan Airlines’ First Class Lounge at Tokyo Narita (NRT) and stuff my face with as much made-to-order sushi as possible.

With about 700,000 miles remaining, I'd book myself a round-trip Flagship First ticket to Sao Paulo (GRU) on American's 777-300. This award usually costs 85,000 miles each way when booked at the MileSAAver rate. However, I found a handful of dates when I could book this flight as a Web Special for just 55,000 miles each way. See? Dynamic pricing isn't always bad. Plus, as a Flagship First passenger, I'll have access to the recently reopened Flagship First Dining facility at JFK.

Off-peak trip to Cancun with a friend

I've had my eyes on the new all-inclusive Hilton Cancun resort for a while now and want to book a trip there once it opens in November. Since award stays are priced based on double occupancy, and beach vacations are more fun with someone else, I'd like to take a friend with me.

Lucky for us, American offers off-peak pricing to Mexico through Nov. 18. Each economy ticket will cost just 12,500 miles each way instead of the usual 15,000 miles, so the price for our two round-trip tickets will be a reasonable 50,000 miles.

Related: How to fly to the Caribbean, Mexico or Central America for the price of a domestic award

We're not done yet! I'd then spend 420,000 miles to book a dozen Flagship First flights between New York-JFK and Los Angeles (LAX). I frequently fly this route to visit family in L.A., so I figured why not do so in style?

American normally charges 50,000 miles each way for a transcontinental first-class award at the saver level. However, as you can see from the calendar below, it's relatively common to find these awards for just 35,000 miles as Web Specials.

This leaves me with 110,000 miles remaining. I'd save these to book 18 one-way domestic economy tickets as needed.

Although domestic economy awards typically cost 12,500 miles each way at the saver level, it's common to find domestic Web Specials from just 6,000 miles each way. For instance, New York-JFK to Miami (MIA) — another route I frequent — has 6,000-mile awards almost every day in January 2022.

Related: This TPG reader has 30 million points and miles — we’re showing him how to use them

Qsuites, Flagship First and beyond

Of course, some of these award flights are unlikely to happen since the pandemic has led to lots of travel disruptions and changes. For example, I have doubts that Argentina will reopen to U.S. tourists in time for our flights. And American recently delayed the launch of its new Seattle-to-Bangalore route, so I'm not confident we'll take that award as booked either.

Frequent TPG readers know that my favorite way to redeem American Airlines miles is to fly in Qatar Qsuite from the U.S. to South Africa via Doha for just 75,000 miles plus around $16 in taxes and fees one-way. So, with 1 million American Airlines miles, I could fly this one-way itinerary 13 times by myself. Or, my husband and I could fly round-trip on this itinerary three times. As such, I'd replace any canceled trips with more Qatar Qsuite awards to South Africa.

Related: 3 ways to spend a million Capital One miles traveling the world

Some travelers find it difficult to earn American Airlines AAdvantage miles. After all, the only major transferable currency that typically transfers to AAdvantage is Marriott Bonvoy (at a 3:1 transfer ratio).

But even if you don't fly with American Airlines all that frequently, you could still use one or more American Airlines credit cards to earn miles. Here's a look at some of the best cards and their current bonuses:

The information for the AAdvantage Aviator Red World Elite Mastercard has been collected independently by The Points Guy. The card details on this page have not been reviewed or provided by the card issuer.

Related: Buying American miles for as low as 1.84 cents each: Is it worth considering?

If you have a lot of American Airlines miles, now is an excellent time to make some redemptions. After all, we're likely to see airline miles and hotel points become less valuable post-pandemic.

But American Airlines miles may be at a greater risk than other programs. After all, TPG's Zach Griff recently learned from American’s loyalty chief that AAdvantage's award charts would likely disappear soon. And other staffers fear a devaluation will result from Citi’s transfer partnership with American Airlines.

So, now is an excellent time to lock in AAdvantage redemptions at current rates. After all, you can cancel AAdvantage awards and redeposit your miles for no cost.