Articles
Samantha Rosen was one of the first 20 employees at TPG. She started as the site's first full-time social media editor and also served as its lifestyle editor.
Follow
April 03, 2018
•
3 min read 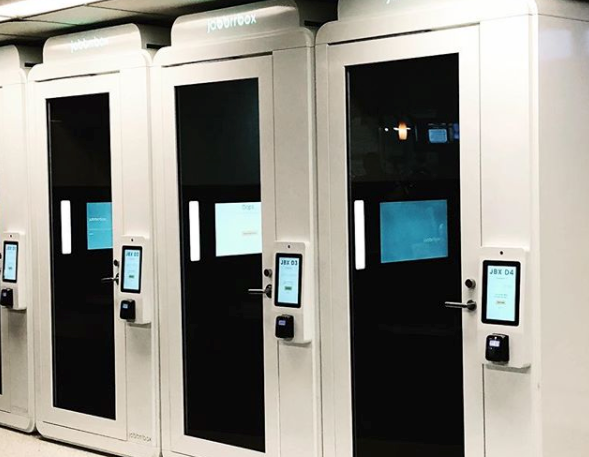 People in Airports Are Paying $30 to Sit in a Box the Size of a Bathroom Stall
This post contains references to products from one or more of our advertisers. We may receive compensation when you click on links to those products. Terms apply to the offers listed on this page. For an explanation of our Advertising Policy, visit this page.

If you've traveled through LaGuardia Airport (LGA) recently, you might have noticed an unassuming box ranging in colors from pearl to purple. If you were really paying attention, you might have even noticed a person inside. Chances are, though, you probably saw it out of the corner of your eye, did a slight double take, and then continued on over to the lounge or your gate.

But if Jabbrrbox has their way, these 7-foot glass boxes will become a regular sight in many crowded spaces and airports around the world. And, not only will you start to notice them, but you'll actually use them, too.

The company was founded on the idea that our lives are becoming too chaotic. Too noisy. Too...much. It bills itself as "Your private office, whenever you need it." After all, what better place to seclude yourself from the rest of the public, than in the middle of a busy airport?

It sounds crazy, but people are lining up to try them; just ask Jeremy Gordon, who wrote a piece on Jabbrrbox for The Outline. Skeptical at first — who would pay to sit in a box by themselves for an hour?! — he was intrigued by the different lighting options, Wi-Fi, and of course, the Photo Booth option. But the most valuable part, he said, was the ability to get away from it all. Let's be honest: running to work, taking care of errands, and tending to personal commitments — all while squeezing in a flight or two — leaves little time for peace, quiet, and privacy. By the end of his time in the Jabbrrbox, he was messaging his coworker saying it was the, "greatest decision," he ever made.

Airports overstimulate your senses; there are lights, sounds, smells, not to mention people— everywhere. Even lounges, which are known for being a place to relax and escape for a bit, are sometimes overcrowded and loud. So, it stands to reason that the Jabbrrboxes in LaGuardia are the first public installation of these spaces.

The company hopes to have more of these up and running in locations around the world. Think: Offices with open floor plans, where privacy is hard to come by. After all, people pay exorbitant amounts of money to sit in private suites on planes. What's stopping them from doing the same thing on the ground?

Keep an eye out for them before your next flight — and the other eye on our site for a full review.