I just got a sneak peek at Norwegian's next series of cruise ships: Here's my 1 big takeaway 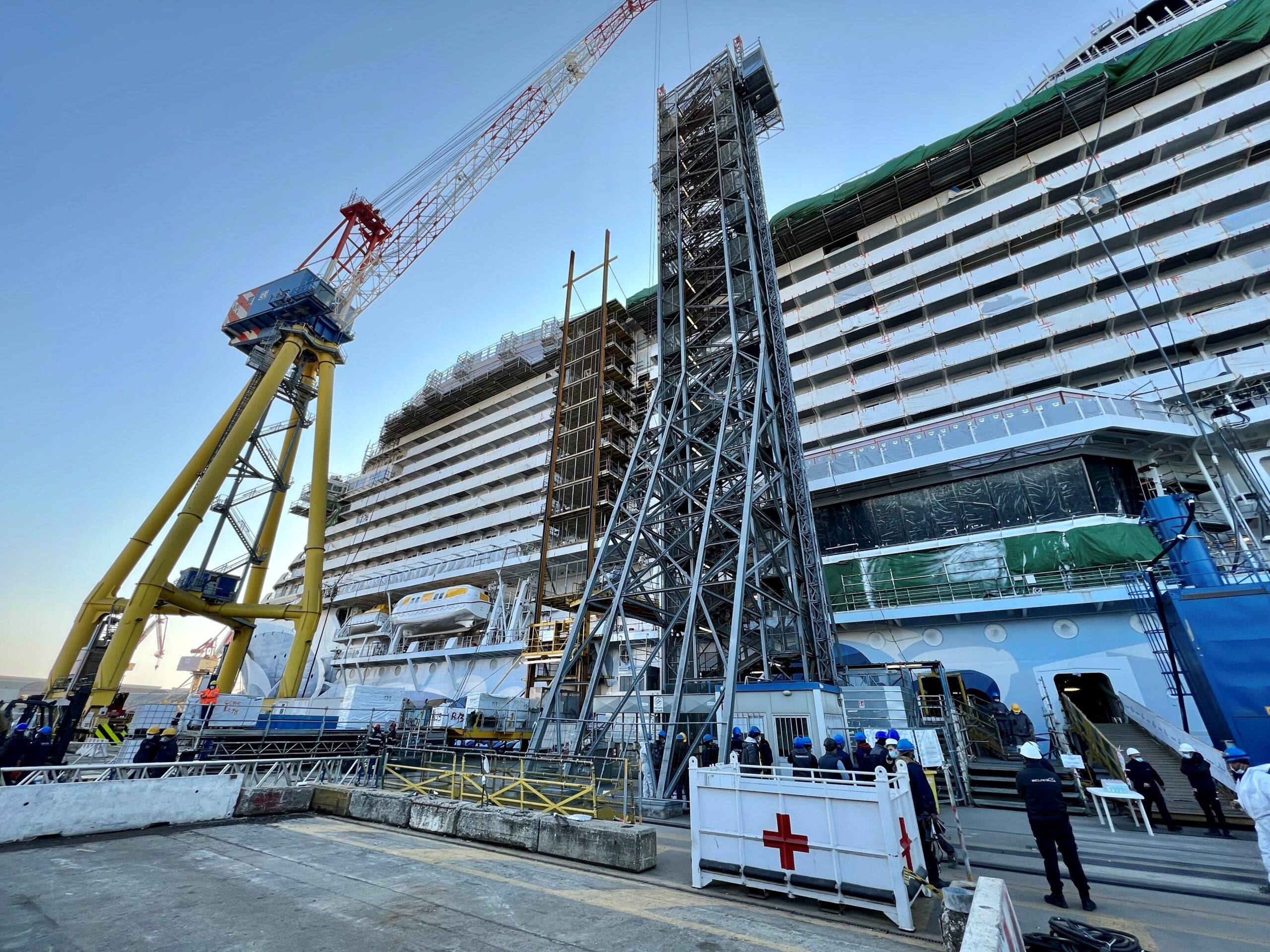 I just got a sneak peek at Norwegian's next series of cruise ships: Here's my 1 big takeaway
This post contains references to products from one or more of our advertisers. We may receive compensation when you click on links to those products. Terms apply to the offers listed on this page. For an explanation of our Advertising Policy, visit this page.

Editor’s note: TPG’s Gene Sloan accepted a free trip to the shipyard in Italy building Norwegian Cruise Line's Norwegian Prima in order to get an early look at the vessel. The opinions expressed below are entirely his and weren’t subject to review by the line.

Norwegian Cruise Line isn't meant to be a high-end brand. But the new ship the line will unveil later this year will offer a lot of high-end touches.

From a massive suite complex at its back designed by celebrated Italian design firm Lissoni to an upscale seafood restaurant with fresh fish delivered straight to the ship, the 3,215-passenger Norwegian Prima will be home to an array of venues and experiences that are "elevated" as compared to what you know from previous Norwegian vessels, to use the word that has become something of a mantra at Norwegian of late.

As I saw this week during a sneak peek at the not-yet-completed ship at the Fincantieri shipyard in Italy where it's under construction, Norwegian Prima has been specifically designed to take the Norwegian brand to a new level.

The first of six new sister vessels that the 17-ship line plans to unveil by 2027 (collectively known as the Prima class), it'll be more spacious than many of Norwegian's existing vessels, with a higher "space ratio" of space to passengers.

It'll also have a higher crew-to-passenger ratio than many Norwegian ships.

Both measures are often used as shorthand for the luxury level and service level of a ship.

In addition, Norwegian Prima will offer what Norwegian is calling the largest variety of suite categories (13) for a large ocean ship, as well as the largest three-bedroom suites of any new cruise vessel and the brand’s largest-ever inside, oceanview and balcony cabins.

Related: The 7 most anticipated new cruise ships of 2022

"We definitely are looking to make our ships more premium," Norwegian Cruise Line president and CEO Harry Sommer told a handful of travel writers at the two-day preview event, in response to a question from TPG about the line's future focus.

"When you think of everything that makes up a [cruise] product -- the design, the maintenance, the investment, the crew, the food, the activities, the entertainment -- we are committed to making every one of them the absolute best within the contemporary market," Sommer said, using a common industry term for mass-market, big-ship cruising.

The line's most direct competitors in the space include Royal Caribbean and MSC Cruises.

The sneak peek at Norwegian Prima this week took place at the Fincantieri shipyard in Marghera, Italy, where the vessel has been under construction for nearly two years. The shipyard is just across the Venice Lagoon from Venice.

During a hard-hat tour of the ship, Fincantieri and Norwegian executives showed off such "elevated" features as an atrium with walls of glass facing the sea that was designed by well-known Miami firm Studio Dado. Still filled with scaffolding and buzzing with workers welding steel, it was already topped with a large-scale, 7,300-pound chandelier with moving light fixtures that was custom built by the renowned Czech lighting design firm Lasvit.

Still to be finished in the atrium area was a three-deck-high light feature that Norwegian executives said would convey the feeling of the sun rising on the horizon. It'll surround a three-level wall art piece that will resemble a topographic map.

Fincantieri and Norwegian executives also led TPG and the handful of other travel outlets attending the event to the ship's innovative, three-deck-high theater. The space will be able to transform into four different configurations, thanks to movable seating platforms. In one configuration, the seating will disappear to turn the space into a Las Vegas-style nightclub.

As I saw during the tour, The Haven on Norwegian Prima spans an unprecedented eight decks across the back of the vessel, with 107 suites in all.

It's a complex that includes a private restaurant and a private lounge for The Haven guests (which we saw, but which were still very much construction zones) and an expansive, top-of-the-ship private sun deck with an infinity pool overlooking the ship's wake -- a stunning feature you won't find at The Haven complexes on any other Norwegian ship.

The Haven complexes on other Norwegian ships are at the front of the vessels, above the ships' bridges -- a location that doesn't allow for the same sort of expansive design.

The outdoor space of The Haven on Norwegian Prima (which we weren't able to see because workers were laying flooring) is so big it'll have room for its own outdoor spa with a glass-walled sauna and cold room.

Other highlights of the ship preview included a peak at outdoor promenades on the sides of the ship that will be home to outdoor dining. It's a concept that exists on some earlier Norwegian ships. But in this case it has been expanded with more dining options.

On the same deck, we also got a quick look at Indulge Food Hall -- a still-under-construction food marketplace with food trucks and other quick-serve eateries. Separate from the ship's buffet (which will be higher on the vessel near the main pool area), Indulge is a new concept for the line that is designed to offer a higher-end quick-serve food experience, at no extra charge. Passengers will be able to order at one of 11 food stalls in person, or they can order from servers who will come to the tables in the venue. They will also be able to order from iPad-like devices at tables.

Food items will then be delivered to passengers at their tables. There will be both indoor and outdoor seating.

Related: The 5 best destinations you can visit on a Norwegian ship

Like most other parts of the ship, the Indulge Food Hall was still coming together with workers having yet to install flooring and other features -- as is typical for a ship at this stage of construction. Norwegian Prima is about 80% complete, according to the shipyard, and isn't scheduled to be finished until late summer. The ship's maiden voyage is scheduled for Aug. 17.

Venues at Indulge will include a food truck serving tapas, a rotisserie eatery, a barbecue outlet, a noodle shop and an ice cream shop. There will also be a Starbucks.

While walking along the promenades on the side of the ship, TPG and other travel writers also got a glimpse of The Drop -- a pair of 10-deck-high dry slides that will be one of the ship's signature attractions (and, to me, a little terrifying -- I am now dreading the prospects of having to review it when it's finished).

The Drop, notably, will be a feature that connects the main pool area at the top of the ship to the promenade areas below. The promenade, to be called Ocean Boulevard, will wrap all the way around the ship and feature a pool and lounge area, as well as outdoor dining.

Sommer, the Norwegian president and CEO, noted in response to a question from TPG about the focus on elevated experiences on Norwegian Prima that the ship is the first that Norwegian has designed from a blank slate since Frank Del Rio took the helm of the brand's parent company, Norwegian Cruise Line Holdings, in 2015.

As Sommer noted, Del Rio has a long history of building high-end cruise brands, having co-founded upscale line Oceania Cruises in 2002 and then leading that brand's buyout and transformation of luxury line Regent Seven Seas Cruises in 2008.

"The evolution (of the Norwegian brand) really started when Frank Del Rio took over," Sommer said. "His entire experience had been in upscale lines ... it's in his lifeblood."

Sommer suggested that Del Rio saw room for improvement at Norwegian, in many areas.

"That's what Frank added," he said, noting that Del Rio convinced the parent company's board to invest $2 billion over the past few years to upgrade the line's existing vessels.

Del Rio, who is president and CEO of the parent company, wasn't at the event.

"The Prima series (of six ships) is the first one where he got a blank sheet of paper to work with," Sommer said. "It's really a testament to his vision."

Previews of cruise ships under construction such as the one TPG received this week are relatively rare, and they offer a chance to see the inner workings of one of the most complex construction operations undertaken by humans.

From start to finish, Norwegian Prima's construction is scheduled to take 27 months.

The Fincantieri shipyard in Marghera, which employs around 5,000 workers in all, also is in the midst of building the second ship in the Prima class series, Norwegian Viva. The partially constructed hull of the latter ship, with its bow sitting next to it awaiting attachment, was visible in a dry dock not far from Norwegian Prima.

Norwegian Viva is scheduled to debut in 2023.

Featured image by Norwegian Prima under construction at the Fincantieri shipyard in Marghera, Italy. (Photo by Gene Sloan/The Points Guy)
Editorial disclaimer: Opinions expressed here are the author’s alone, not those of any bank, credit card issuer, airline or hotel chain, and have not been reviewed, approved or otherwise endorsed by any of these entities.