Inside JFK's 'new' and much improved Priority Pass lounge 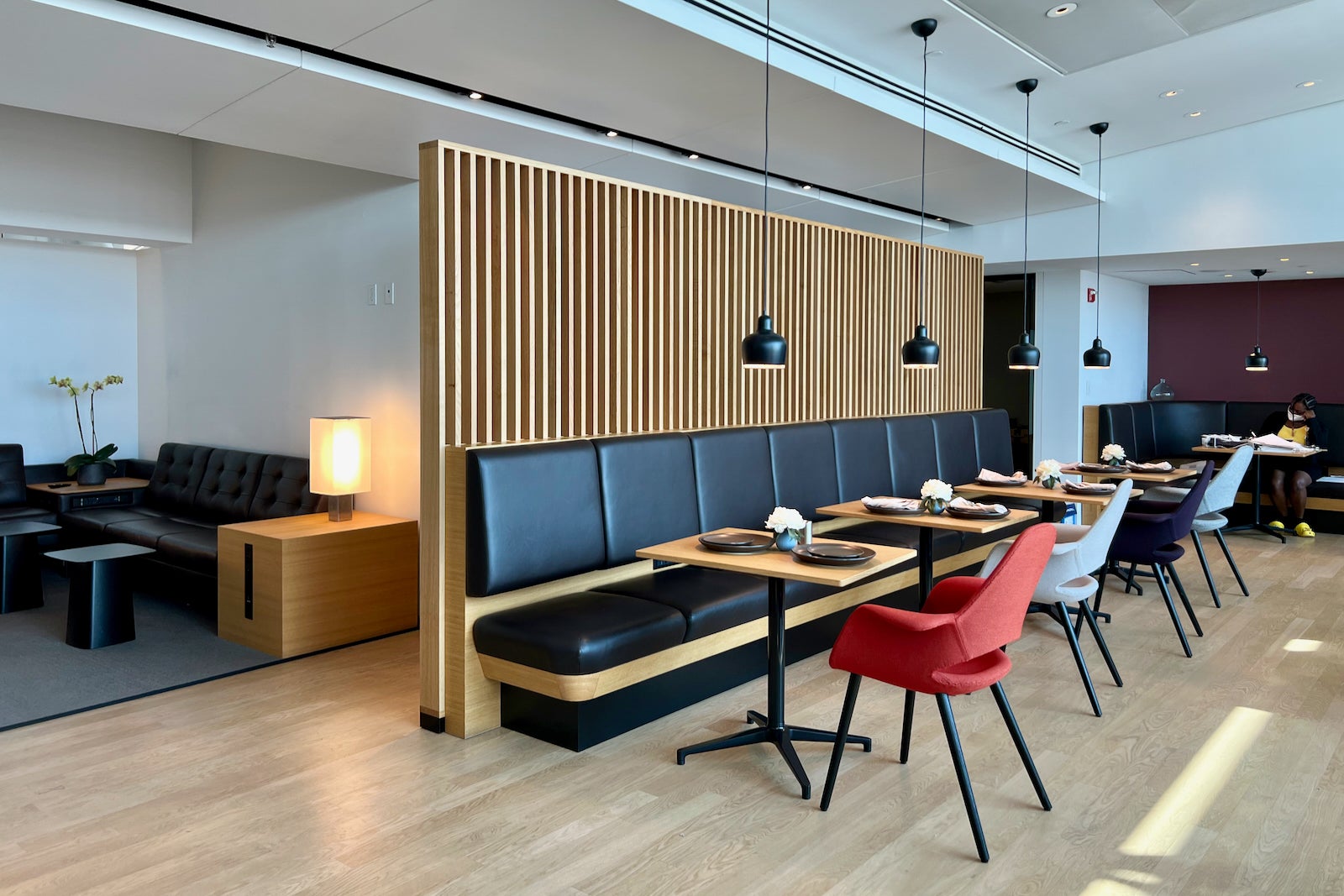 The Wingtips Lounge, a Priority Pass-accessible outpost in Terminal 4, recently moved into a larger, brighter and more welcoming space. With the move comes some big upgrades for flyers.

Just before the COVID-19 pandemic, Swiss Air Lines opened a brand-new lounge in Terminal 4, steps away from the old Wingtips location. The flag carrier of Switzerland brought many of its staple design elements into the new space, which was open to premium-cabin passengers and elite frequent flyers of the airline and its partners.

During the pandemic, however, Swiss relocated its JFK operations into Terminal 1 (home to the other Lufthansa Group airlines), leaving the roughly year-old lounge space without a tenant.

After a few months of shuttered doors, Wingtips moved its JFK outpost down the hallway into the space that Swiss had vacated — making for a big upgrade for flyers using the lounge.

Accessing the Wingtips Lounge at JFK

The Wingtips Lounge is operated independently by a third-party contractor, Airport Terminal Services.

The company has a partnership with Priority Pass that allows anyone flying from JFK to use the lounge before departure. All you need is a same-day boarding pass and a valid Priority Pass membership, which is included with many of our top recommended credit cards.

Several airlines that depart from Terminal 4 contract with Wingtips to allow their premium cabin and elite frequent flyers to use the lounge. Notably, this includes Singapore Airlines, which during the pandemic allowed business-class flyers to use the (superior) Virgin Atlantic Clubhouse.

As of early August, those passengers are now invited to use the Wingtips lounge instead. (Those flying in Suites first class can still use the Clubhouse before departure.)

Wingtips also sells day passes, which are valid for four hours, for $50. Any passenger can take advantage of this offer.

You'll find the Wingtips outpost located just steps away from the centralized security checkpoint, in the opposite direction of the American Express Centurion Lounge. There are plenty of signs and a well-marked entrance to guide you inside.

The Wingtips Lounge is open daily starting at 8 a.m.; it closes at 8 p.m. Monday to Wednesday and Saturday, and at 9 p.m. on Thursdays, Fridays and Sundays. Access via Priority Pass is cut off after 4 p.m. since the lounge often suffers from overcrowding in the late afternoon and evening before most transatlantic flights depart.

Once inside, you'll notice that Wingtips maintained all of Swiss' design elements, from the furniture to the tables to the wood-grain separations between seating areas and even the signature Swiss font.

The space measures 3,574 square feet, which can comfortably fit 142 passengers.

At first glance, the design has improved substantially compared to the tired and worn feeling of the old Wingtips lounge.

The new lounge maintains the Swiss layout as well. This includes a small buffet area just as you enter, followed by two main dining areas — one with high-top tables located by the entrance and another with more traditional two- and four-top booths.

As you go further into the lounge, you'll find a large bar-style seating counter that's great for those looking to catch up on work on their laptops.

Behind this area is a long bench with some seats, as well as an assortment of individual recliners.

While the new Wingtips location maintains the Swiss design aesthetic, the quality of food and beverage offerings has drastically declined.

Gone are the tasty soups, salads and hot entrees. In their place, Wingtips has scaled back the menu to include just a handful of basics.

Breakfast is served from opening until 11 a.m., and it consists of some yogurt, (stale-looking) muffins, hash brown potatoes and scrambled eggs.

The all-day dining selection begins at 11 a.m., though it doesn't get much more appealing. Offerings include chicken salad and vegetable soup, among others.

The lounge's complimentary alcohol selection isn't especially impressive (think bottles of Bacardi rum and Wheatley vodka). However, it's worth mentioning that everything is self-service, including the wines and soft drinks.

You'll find a drink station located toward the center of the lounge. This area features two large pitchers of water and iced tea, along with a Franke coffee machine.

For a Priority Pass lounge, the Wingtips Lounge boasted an above-average array of amenities.

To start, aviation enthusiasts will undoubtedly appreciate the space's floor-to-ceiling windows that drench the entire space with plenty of sunlight. You'll have great views of Terminal 4's B pier and the airport's north/south runways in the distance.

Nearly every seat has access to a universal power outlet that accepts plugs from most countries, along with a handful of USB-A ports.

The lounge also features five individual restrooms, as well as two private shower suites, which are available on a first-come, first-served basis for $20 per use.

Password-protected Wi-Fi is available throughout the space, with download and upload speeds measuring a steady 25 Mbps.

When Swiss originally built this lounge, it included an exclusive area reserved for its highest-tier elites and first-class passengers. This is the area to the left of the entrance desk.

Wingtips preserved this special space, but it's not open to everyone. Instead, Wingtips sells access to this "first-class lounge" for $50 a person, assuming that you entered with a Priority Pass membership. If you instead arrived at the lounge with an invitation from an airline, that buy-up drops to $40.

I visited the lounge using my Priority Pass, but I asked the receptionist if I could just take a peek into the space to grab some photos.

Like the rest of the lounge, the layout and design maintain the original Swiss motifs.

There are just four two-top dining tables, a few reclining chairs and some couches, with a total capacity of 26 passengers.

The private nap pod room that Swiss opened has been turned into a back office, so the overall space might feel a bit small. That said, there are likely only ever a handful of passengers in here at any given time, so if you're looking for a quieter, more exclusive place to relax before your flight, this could be it.

Wingtips offered an upgraded food and beverage service in this space, which includes a la carte dining with menus and waiter service. (The current menu is available below, but the lounge attendant told me that it would soon be overhauled and improved.)

The liquor selection is also of a (bit) higher caliber.

You'll find two restrooms and two showers in this area. Aside from a few extra amenities, such as dental kits and sanitary napkins, they largely resemble the ones in the main lounge.

Even though the Wingtips Lounge has historically been one of the few Priority Pass accessible lounges at JFK, I almost always avoided using it. The space was dark and unappealing, and it was often significantly overcrowded.

However, that's all changed.

The Wingtips Lounge just took over the space recently vacated by Swiss, after that carrier co-located with its Lufthansa Group partners in Terminal 1.

While Wingtips brought its existing (and somewhat uninspiring) food and beverage offerings to the new space, the outpost is at least brighter and significantly more inviting.

During times when the nearby American Express Centurion Lounge and Delta Sky Club are at capacity, the new Wingtips location could provide a great alternative.

Even though the food and drinks may not be the airport's best, finding a quiet place to sit and relax or catch up on work is getting increasingly difficult in airports these days.

For now, the Wingtips Lounge offers just that, and it's worth visiting for that reason alone.

Related stories
17 ways to earn lots of Marriott Bonvoy points
Delta SkyMiles Gold Amex card review: Perfect for casual Delta travelers, now with a 65,000-mile offer
Fast-growing Viking doubles down on adventure cruising with a second expedition cruise ship
Quick Points: These award tickets are best to book at the last minute
Featured image by ZACH GRIFF/THE POINTS GUY
Editorial disclaimer: Opinions expressed here are the author’s alone, not those of any bank, credit card issuer, airline or hotel chain, and have not been reviewed, approved or otherwise endorsed by any of these entities.