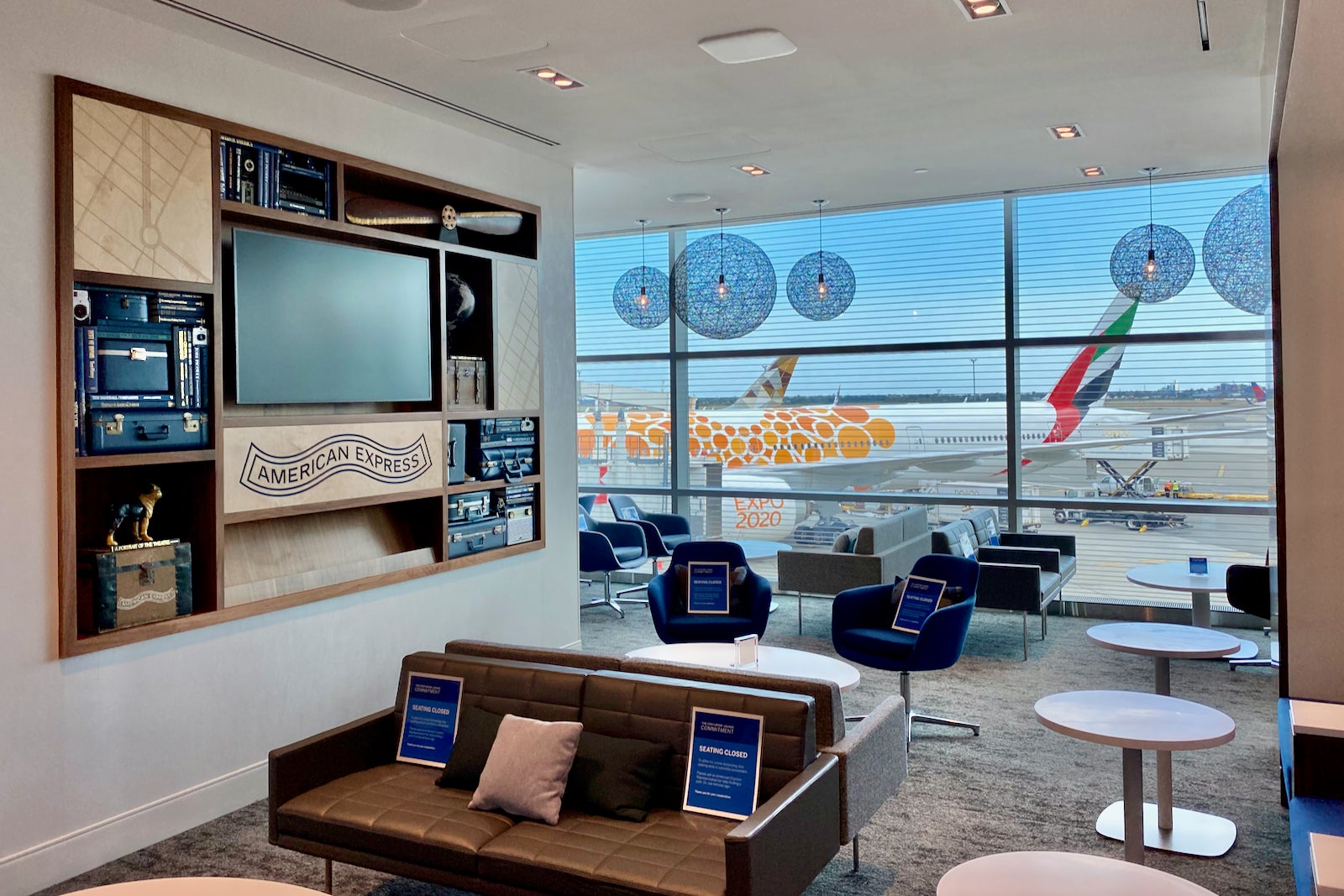 It's been getting harder to enjoy the American Express Centurion Lounge network.

What was once a quiet oasis in the bustling airport has turned into a place that some are actively avoiding.

Between waitlists and limited operating hours, many cardmembers of Amex's premium cards (and TPG staff alike) have complained in recent months about the Centurion Lounge.

While the experience vastly differs based on when you're traveling and which outpost you're visiting, it's clear that Amex has some room to improve its lounge offering.

The issuer has the upper hand, for now, when it comes to credit card-branded airport lounges. But with Chase and Capital One getting in the game as well, now's the time for Amex to double down on its efforts to enhance the Centurion Lounge — and it can start with these eight suggestions.

Last year, we broke the news that Amex added live capacity indicators for Centurion Lounges to its mobile app. Now, when you're passing through airports with Amex lounges, you can get a sense for how crowded the space is before making the trek across the terminals.

But, the implementation could use some work.

For one, there are only five qualitative descriptors for lounge capacity, ranging from “not busy” to “a little busy” to “very busy” to “almost full."

Furthermore, on several recent visits to Amex lounges, I've noticed that the in-app capacity designation was wrong. When I passed through the Centurion Lounge before my recent Emirates premium economy flight, the Amex app showed that the JFK outpost was "very busy."

When I got inside, there wasn't a single person on the lounge's lower level.

On the flip side, there is no designation for when the lounge is at or over capacity. "Almost full" is the highest designation, which isn't always sufficient enough to paint a clear picture.

To give flyers a more accurate sense of crowding, it'd be great if Amex could add a more comprehensive live indicator to its app, perhaps with a percentage full metric and an estimated wait time if the lounge is operating with a waitlist.

Overcrowding is simply unavoidable at times. Between inclement weather and airline meltdowns, there will be times when the Centurion Lounge gets filled to capacity.

But, if Amex really wants to differentiate itself, it could implement a digital waitlist feature. Instead of requiring passengers to schlep to the lounge to either wait in line or add their names to a list, the issuer could add a waitlisting feature to its mobile app.

In fact, Amex could borrow some of the back-end technology from Resy, the restaurant-management platform that the issuer purchased in 2019. Resy does a great job of integrating with a restaurant's live availability, and it likely wouldn't take too long to add a similar feature across the Centurion Lounge network. (In fact, Amex already uses the Resy integration for access to the Centurio Suite at the U.S. Open tennis tournament.)

That won't make more space appear, but it does improve the experience with transparency and efficiency.

Sometimes, you might really want to get into the Centurion Lounge. Whether it's a special trip or it's been a long travel day, there are times when lounge access is more valuable than others.

To keep cardmembers happy, perhaps Amex could offer a handful of "fast passes" each year to guarantee entry into the lounge within a prescribed, say 15 minute, window. That way, the Centurion Lounge would be there when you absolutely needed it.

This move might require reserving some space in the lounge for those redeeming fast passes, but it's a move that many will likely appreciate during their most important visits.

The pandemic is changing how lounge operators view to-go offerings. For years, airport lounges have required that all food and drinks be consumed within the premises.

Now, we're seeing more and more spaces offer takeaway snacks and drinks. This can help minimize crowding in the lounge, and is sure to be a welcome move for those with tight connections.

So far, Capital One's Dallas/Fort Worth lounge has one of the most extensive to-go offerings we've seen.

But, United might give the issuer a run for its money when it opens the first-ever "United Club Lite" in Denver, which will exclusively offer to-go goodies.

Hopefully, Amex will embrace this trend in the coming years as a way to provide some value to cardholders even when space inside the lounge isn't available.

It's always a bummer when you trek to the lounge, only to be turned away due to overcrowding.

While it'd be great if Amex could open more outposts and expand its existing ones, the reality is that space in airports isn't readily available.

If offering to-go food and beverages isn't possible at this moment, another alternative is to offer a voucher for airport concession for those who tried entering, but couldn't be accommodated. Perhaps Amex could partner with a nearby restaurant or coffee shop to offer cardmembers a discount (or complimentary) food and drinks.

This would act similarly to the Priority Pass Select membership included with other premium cards, except Amex could tailor it for its most exclusive cards. The coupon could be added as an Amex Offer, which gives travelers a rebate after spending a certain amount with qualifying merchants.

This certainly wouldn't be the first time that the issuer added a coupon to its $695-annual-fee Platinum Card® from American Express (see rates and fees).

Along similar lines, Amex is the only issuer that doesn't offer a complete Priority Pass Select membership with its premium cards.

While card members can visit all the Priority Pass affiliated lounges and Minute Suites locations, they can't use the card at any of the program's airport restaurant partners.

To help alleviate overcrowding, Amex could consider adding the restaurant benefit to the Priority Pass membership included with its top card.

After all, six of the 13 airports that have Centurion Lounges also feature at least one restaurant that partners with Priority Pass (Denver, Houston, Miami, New York-JFK, San Francisco and Seattle).

For Platinum card travelers exclusively looking for some grub, this would be a great alternative to visiting a busy Centurion Lounge.

When the Amex Centurion Lounge network first started reopening in late 2020, the outposts had limited hours. In certain airports, more than 30% of departing flights were operating outside of Centurion Lounge hours.

Unfortunately, while the calendar has flipped past a couple of years, not much has changed with the operating hours. Only three of Amex's 13 domestic lounges open before 7 a.m., and most still close by 7 p.m., with Denver shutting down at 5 p.m.

For those traveling early in the morning or late at night, visiting a Centurion Lounge is out of the cards. You can find the full list of updated hours of operation below.

Hopefully, Amex is working to extend these hours to cover more flights out of a given airport.

This one is a bit more wishful in its line of thinking, but Amex should continue expanding its existing locations.

The issuer did a great job with the Las Vegas expansion, and larger spaces are set to debut later this year in San Francisco and Seattle, which have historically been two of the most crowded outposts.

Other spaces that are often at capacity include the Charlotte, Denver and Houston lounges, so hopefully, Amex is researching expansion options in these airports.

Whether it's building on to existing spaces or opening a second lounge (either branded as the Centurion or as the Escape Lounge, a Centurion Studio Partner) in certain airports, Amex's airport network will hopefully continue to grow to pace with the expansion of the membership base.

Of the premium cards on the market, Amex's version is the most expensive to keep each year.

The $695 annual fee includes many perks that keep me a loyal customer, but for some customers, the most exciting benefit is airport lounge access.

Unfortunately, that's less of a guaranteed perk during peak travel periods, and many cardmembers are growing frustrated.

As the world reopens and people hit the road again, the Centurion Lounge is only going to get busier. That said, there are still ways for Amex to enhance the experience, whether it's better digital tools or a new to-go offering.

While the list of possible improvements is long, many of them should be a low lift. After all, other lounge operators and card issuers are already embracing a good chunk of them.

More than ever, if Amex wants to offer the cards that people don't leave home without, it's going to need to find a way to roll out the welcome mat out at its airport lounges.

Featured image by The new Amex Centurion Lounge at JFK (Photo by Zach Griff/The Points Guy)
Editorial disclaimer: Opinions expressed here are the author’s alone, not those of any bank, credit card issuer, airline or hotel chain, and have not been reviewed, approved or otherwise endorsed by any of these entities.