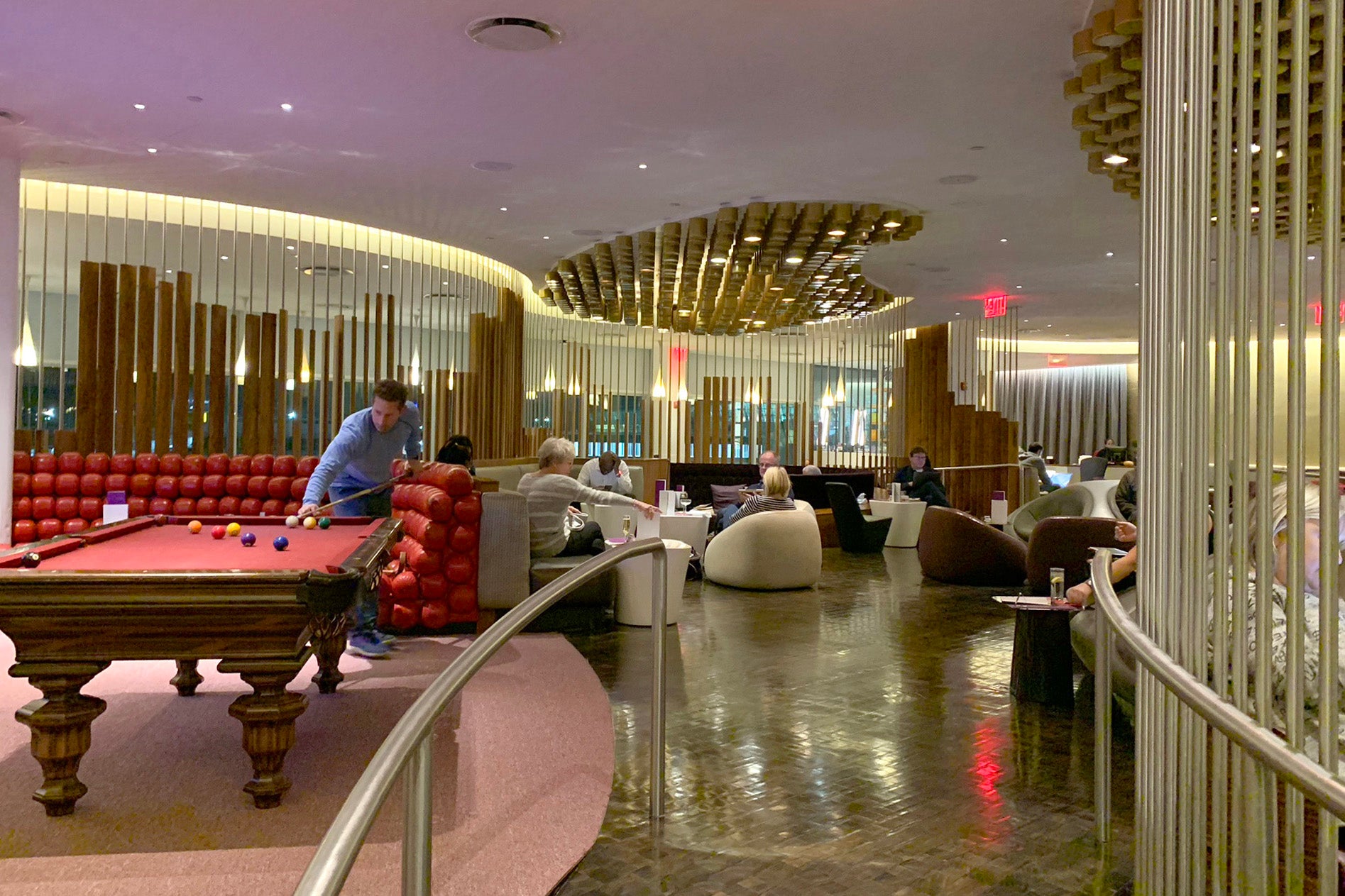 I've heard mixed reviews of the airline's Upper Class business-class product, especially on older planes, but there's no question that Virgin Atlantic operates some of the poshest airport lounges in the world.

I've visited the main Clubhouse, at London Heathrow (LHR), plus the fantastic outpost at Newark (EWR), which is also accessible to Air India and Singapore flyers, and even Priority Pass members at certain times of day.

The airline also offers locations in Boston (BOS), Los Angeles (LAX), New York-JFK, San Francisco (SFO) and Washington, DC (IAD), in addition to London Gatwick (LGW) and Johannesburg (JNB). On this trip, I had a chance to experience Virgin's lounge at JFK.

Virgin Atlantic's JFK Clubhouse is in Terminal 4. I didn't see signs posted anywhere in the terminal, so I really struggled to find it at first — your best bet is to follow signs for Gate A6 then walk up the stairs. Assuming you're in the right place, you'll see this entrance just ahead.

Virgin Atlantic Upper Class passengers (on a Virgin flight) and Flying Club Gold members (in any class of service) could access the lounge. They could even bring a guest traveling on the same flight.

There were other ways to get in, too. Though I've flown through JFK on many occasions, this was my first time traveling with a boarding pass that got me access to the Clubhouse. My secret this time? A ticket for Singapore Airlines' A380 Suites to Frankfurt (FRA). According to Singapore, Suites passengers and Solitaire PPS Club members got access to the Virgin Atlantic Clubhouse, while business-class flyers and Star Alliance Gold members used the Swiss lounge instead.

Delta passengers may be able to access the lounge as well, depending on route, class of service and status. As Delta explains:

My Singapore flight wasn't scheduled to depart until 8:15pm, but I wanted to have plenty of time to explore the lounge, so I arrived around 4:30pm.

There were only about a dozen guests using the lounge at that time, which made sense, given that the first Virgin Atlantic red-eye wasn't scheduled to depart until 6:30pm.

As was the well-stocked bar.

Even the famous pool table was unattended — if you're hoping to make the most of your stay, you might want to arrive before 5pm.

That absolutely goes for the spa as well — Virgin Atlantic customers were entitled to a free 15-minute treatment, ranging from a chair massage to a quick hair styling. A tip was expected, and the schedule seemed to fill up very quickly. It was first come, first served, so be sure to make an appointment as soon as you arrive.

I was surprised to learn that Singapore Suites passengers had to pay for all treatments, but I still decided to give two a try for the purposes of this review. My 30-minute, seated, back, neck and shoulder treatment was a letdown and oddly only lasted 25 minutes.

The environment really didn't help — I spent those 25 minutes listening to the rest of the spa staff chatting at the front desk, paired with loud gate announcements and the clanging of utensils in the nearby kitchen. At $44 plus tax and a $5 tip, I'd say that massage was definitely a "skip."

My haircut was an entirely different story, however. My stylist, Janet, was incredibly friendly and did a top-notch job with the cut. At $28 (plus tax and a $5 tip), that made up for the disappointing massage. The tarmac views were fun, too, and I imagine they're even better during the day.

Virgin also offered self-service showers. There was no attendant, so you just opened a door and hoped it was clean.

The first shower I walked into apparently hadn't been cleaned up yet, though the second one was ready to go. I loved the Bumble and bumble amenities, though the water pressure was weak and I had a heck of a time figuring out how to set the temperature.

There was also Wi-Fi throughout the lounge, but it was especially sluggish — I've had speedier internet on some planes (though certainly not the older A380 I was about to board to Frankfurt).

I returned to the dining room after my shower, and, as we were approaching 7pm, the lounge really began to fill up.

I'm glad I had chosen to dine earlier, a bit before 5pm. Momi, my server, was just so outgoing and cheerful that I could tell it was going to be a great experience right away.

All of the Clubhouse food was a la carte, with separate menus for breakfast (available until "midday"), bar snacks, flatbreads and main courses, plus a special afternoon tea selection, available from 2pm until 6pm.

I started the meal with an espresso martini and a glass of sparkling water with lime. Both were at my seat within two minutes of ordering.

After that, I tried a couple of bar snacks. The cauliflower mac and cheese was gooey and warm, but the highlight was the delicious char siu chicken. It was the perfect pairing for my Monkey Fist IPA.

Instead of a main, I ordered the afternoon tea, which came with a scone with clotted cream and jam, a muffin, a small croissant with salmon, a quiche and a delicious brownie with a tube of caramel sauce you could use to sketch your own design.

I attempted to write "TPG Awards," in the spirit of the event that brought me to the Clubhouse, but the caramel quickly oozed together. Adding some cream to the surface made writing much easier, though I only had enough caramel left for a big ol' "TPG" at that point.

I can't recall ever having so much fun dining alone. Momi (and the delicious food) really made my meal special.

Forty-four-dollar massage aside, I had such a great time at the Virgin Atlantic Clubhouse that I now eagerly actually want to fly Virgin Atlantic. From a brand-building perspective, giving top Singapore Airlines customers access to the lounge was a brilliant move.

I have yet to visit a more entertaining lounge in the New York City area. Even the Polaris Lounge at Newark is only a close second, thanks to Virgin Atlantic's spa treatments (free for Virgin customers), friendly staff and top-notch dining. Be sure to arrive early if you manage to score access, though, as complimentary spa sessions book up quickly and the lounge does seem to fill up as the night goes on.