Beyond Disney: 17 new theme parks and attractions we're looking forward to this year

Articles
Tarah Chieffi is a family travel writer for TPG. Whether she’s sharing tips for planning the perfect theme park trip or finding a kid-friendly hotel, her goal with every story she writes is to inspire families to get out and explore the world.
Follow
March 02, 2022
•
11 min read 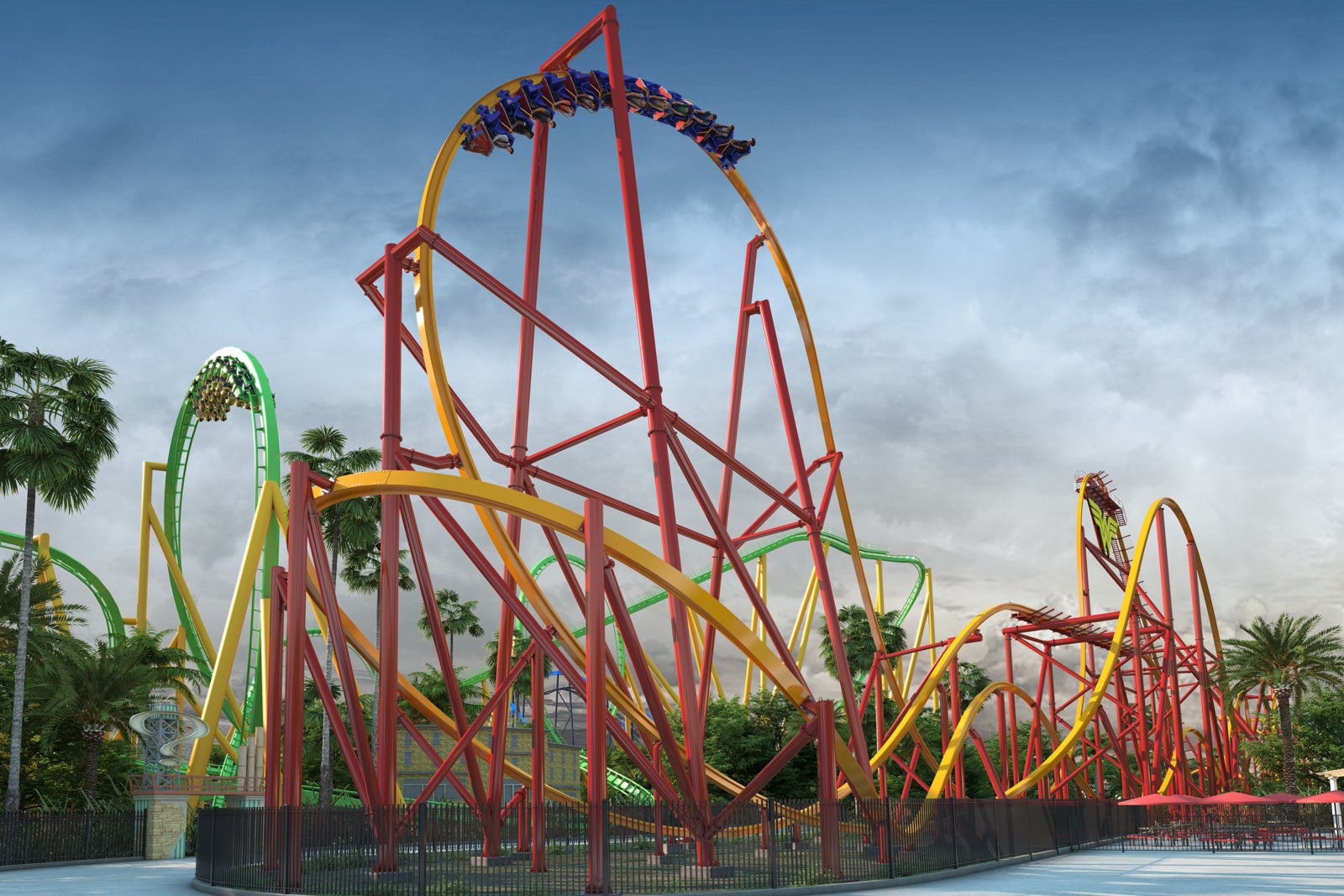 It's no secret that we geek out when Disney announces a new roller coaster, restaurant or hotel. But while Disney is an undeniable juggernaut in the space, there's more to the world of theme parks than just Mickey's backyard.

Not even counting what Disney is cooking up, there are almost 20 new attractions (and, in a few cases, entirely new theme parks) across the U.S. that are scheduled to open this year.

No matter your preferred level of thrill, there's something on this list for everyone. And because these new offerings are spread all over the country, you might be closer to some all-new fun than you realize.

Legoland New York Resort officially opens for the season on April 8, 2022. Just a few months later when swimsuit season hits, the park will open a Lego-themed water playground where families can beat the summer heat.

The play area includes four waterslides, a massive interactive water play structure and a station where you can build and race your own Lego boat. There is also a nearby changing area so you can slip out of your wet swimsuit when you are ready to head for dry land.

SeaWorld San Antonio's newest ride may prove that everything really is bigger in Texas.

Tidal Surge, a "screaming swing" with two pendulum-like arms that propel riders back and forth at speeds of up to 68 miles per hour, will be the world's tallest and fastest ride of its kind. If your favorite thing about roller coasters is that flutter-in-your-tummy feeling you get every time you lift out of the seat, you'll get that airtime over and over again on Tidal Surge.

Aquaman: Power Wave combines the best (in our opinion) parts of a super-intense launch coaster and a log flume ride -- high speeds and even higher splashes. The track for Aquaman: Power Wave is only 700 feet long, but you'll be launched backward and forward along that track multiple times before hurtling toward a "splashing" finale. In other words, you will get wet.

Aquaman: Power Wave is scheduled to open in summer 2022.

Aquaman: Power Wave isn't the only new attraction coming to Arlington's Six Flags Over Texas this year. Pirates of Speelunker Cave is a reimagining of one of the park's earliest attractions called The Cave. Six-person boats will take guests into the depths of a cave and right in the middle of a battle between treasure-hunting pirates and the residents of the cave, the Speelunkers. This boat ride combines physical sets, animatronics and projections for a fully immersive adventure.

Pirates of Speelunker Cave is scheduled to open in early 2022.

Dr. Diabolical is a menacing villain who built a machine designed to "harvest the essence of human adrenaline and fear." What better way to harvest such things than the world's steepest dive coaster?

After a 150-foot lift hill, riders on Dr. Diabolical's Cliffhanger will momentarily dangle face-first above a 95-degree, beyond-vertical drop, before flying down and around multiple twists, turns and loops at speeds of up to 60 miles per hour.

Dr. Diabolical's Cliffhanger is scheduled to open in 2022.

Related: 4 of the country's best second-cities for family vacations

SeaWorld was once a destination for visiting with and learning about marine life.

Today, it's competing for a toy spot for record-breaking thrill rides. Ice Breaker, the newest coaster to join its ranks, is the park's first launch coaster. It also boasts the steepest vertical drop in the state of Florida. Ice Breaker's unique design allows for multiple forward and backward launches (four in total) and a series of airtime-heavy twists, hills and inversions.

This relentless coaster includes a 206-foot-tall drop and reaches a top speed of 76 miles per hour, making it the country's tallest hybrid coaster and the fastest and steepest hybrid coaster in the world. We're pretty sure that's code for "not for the faint of heart."

Like its next-door neighbor, Legoland Florida, everything at Peppa Pig Theme Park was designed with preschoolers in mind. The park has a mix of rides and play areas, including a "muddy puddles" splash pad that is, luckily, not as muddy as the puddles from the animated children's series. The park holds a Certified Autism Center designation and many of the attractions and play areas are wheelchair accessible.

Related: Best trips to take with kids of every age

Busch Gardens claims that its newest coaster "harnesses all the speed and strength of five of the greatest Roman gods," and they've got the stats to back it up ... in so far that those stats exist. This steel coaster reaches speeds of 73 miles per hour and takes riders through four intense launches, making it the world's fastest multi-launch coaster.

Lost Island Theme Park, a sister park to the nearby Lost Island water park in Waterloo, Iowa, is still under construction and official details are sparse.

According to a Des Moines Register interview with general manager Eric Bertch, the park is scheduled to open in summer 2022 and will be divided into "five different realms" with "a variety of rides that range from kids' rides up to some pretty impressive thrill rides." The park's own website is a collection of ride progress photos and videos, but consider us intrigued.

Glenwood Caverns Adventure Park is located in Glenwood Springs, Colorado. However, the town went by the name Defiance when it was founded in the late 1800s. Defiance is a fitting name for the park's newest coaster, as it seems to defy the laws of gravity and physics as you fly high above the Rocky Mountains.

It's hard to describe Tumbili without actually seeing it (which is why we included this handy rendering). But if the words "4-D Spin Coaster" don't scare you off, you're in for a real treat with this one.

Riders will fall head over heels (literally) many times over on this suspended steel coaster as the cars flip continuously throughout the ride. The whole experience lasts just under a minute, so even if it does sound scary, we'd probably try it at least once.

Tumbili is scheduled to open in 2022.

Named for the Emperor penguin (who you can get up close and personal with at SeaWorld San Diego), Emperor is set to be California's tallest, fastest and longest dive coaster.

What is a dive coaster exactly? When you reach the top of Emperor's 153-foot-tall lift hill, you'll be momentarily suspended above a 14-story drop before diving down at a face-first 90-degree angle. Oh, and it's floorless, which only adds to the intensity.

Related: 15 of the best things to do in San Diego

As a matter of fact, we can tell you how to get to Sesame Street.

Sesame Place already has an East Coast park in Philadelphia, but Sesame Place San Diego will be the first West Coast location. As you might have guessed, when kids visit Sesame Place San Diego, they can meet their favorite characters, ride kid-friendly attractions and explore a real-life Sesame Street. Be on the lookout for interactive experiences throughout the "neighborhood" and lots of fun souvenir photo opportunities.

With the addition of Wonder Woman Flight of Courage, California's Six Flags Magic Mountain will be home to 20 roller coasters, more than any other theme park in the world.

Riders will take flight on this single-rail coaster (the tallest and longest of its kind) through more than 3,300 feet of winding and looping track. Wonder Woman aficionados will also appreciate the immersive theming of the queue area, designed to look like her island paradise home, Themyscira.

Wonder Woman Flight of Courage is scheduled to open in summer 2022.

Pennsylvania's Hersheypark is adding not one, but two, candy-themed attractions to its lineup.

Jolly Rancher Remix is a reimagining of the park's Sidewinder roller coaster and will feature randomized light and music effects for five completely different ride experiences. Mix'd Flavored by Jolly Rancher is a quadruple-arm swinging ride that takes riders forward and backward (but not upside down) while other riders swing surprisingly close.

Related: 8 ways to make the most out of a theme park trip

Whether you are looking for a new way to have a fun day with your preschooler or want to try out the latest and greatest thrill ride, you have options with all the new happenings across theme parks in the U.S. this year.

Related stories
Chasing elite status on Alaska Airlines? A flight to California this fall could help
Flights to Auckland starting under $700 round-trip
The ultimate guide to earning elite status with United cards
American Airlines forgot it had landing slots at JFK. Then it lost some of them
Featured image by (Photo courtesy of Six Flags Magic Mountain)
Editorial disclaimer: Opinions expressed here are the author’s alone, not those of any bank, credit card issuer, airline or hotel chain, and have not been reviewed, approved or otherwise endorsed by any of these entities.