Traveling this Labor Day weekend? Here's what to expect at the airport

Articles
Caroline Tanner covers news and travel for TPG. She is a journalism graduate of Mizzou and Northwestern.
Follow
Aug. 31, 2022
•
8 min read 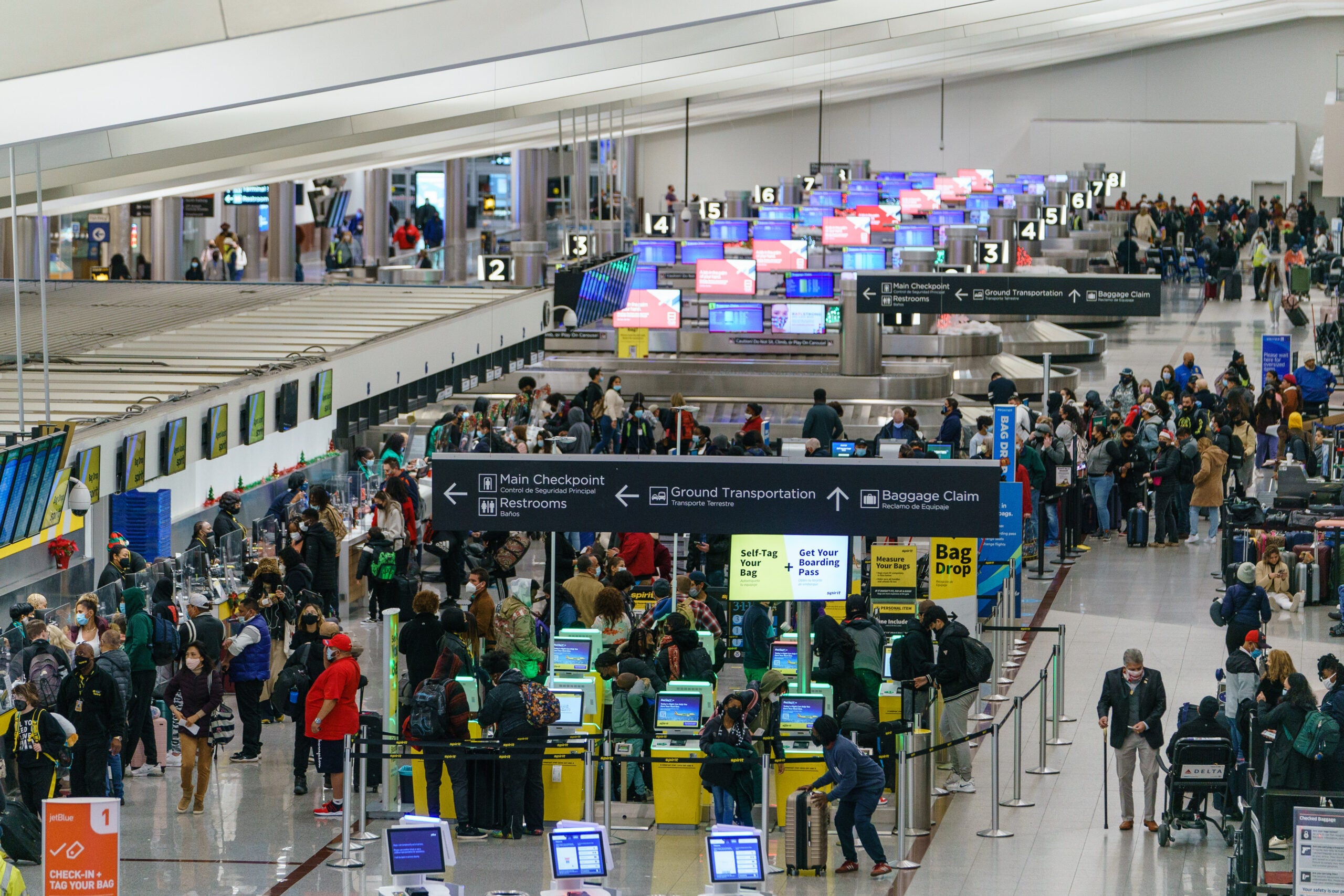 The unofficial end of summer is fast approaching, with Labor Day on the immediate horizon.

An estimated 12.6 million people are expected to hit U.S. airports this weekend, according to data from Hopper, an online travel agency and app that tracks the price of airfare, car rentals and hotel rooms.

When it comes to flights, Hopper pegs the average domestic Labor Day weekend airfare at $278 round-trip, which is a 23% increase over last year's numbers. However, it's certainly not a large enough jump to derail the plans of millions ready for one more summer getaway.

The Big Three U.S. airlines — American Airlines, Delta Air Lines and United Airlines — say they are preparing to fly between 2.5 million and 2.9 million passengers each. This means that U.S. airports and airlines will likely see somewhere between 9 and 12 million passengers.

If you are one of those millions packing your bags for vacation, here's what you can expect throughout the holiday travel weekend ... along with some tips for navigating any potential chaos at the country's busiest airports.

Nearly 13 million passengers are scheduled to fly from U.S. airports starting Thursday, Sept. 1, through Monday, Sept. 5; this is an average of 2.5 million travelers per day this weekend, based on Hopper's Labor Day 2022 Travel Guide.

As you might suspect, Hopper expects the Thursday and Friday before Labor Day, along with Labor Day itself, to be the busiest travel days of the weekend, as travelers head to and return from their destinations.

However, some airports also expect to see vacationers extending their trips beyond the typical four- or three-day weekend; many may be departing for extended celebrations beginning as early as Wednesday, Aug. 31, and not returning until Tuesday, Sept. 6, perhaps due to an increase in remote working and flexible travel schedules.

If you are one of the 1.6 million-plus passengers expected to travel through ATL from Sept. 1 to 6, airport officials say to arrive at least two hours early, particularly on Friday.

"Airport projections indicate Friday, Sept. 2 as the busiest day, with a little more than 300,000 passengers expected in ATL," an airport spokesperson said via email.

Not to mention, the usual tips and tricks to get through security faster — such as using Clear — don't always have the same time-saving impact in Atlanta as they do in other airports, likely because of a higher rate of use among travelers there.

"That’s about 17% higher than the same period last year and 16% lower than 2019," per a PHL spokesperson. "The peak travel days for the Labor Day holiday weekend will be Thursday, Friday and Monday."

The Denver airport is projecting Thursday, Friday and Monday as the busiest days of the holiday travel period, matching what Hopper shows for national trends.

The airport anticipates nearly 67,000 passengers entering Transportation Security Administration checkpoints at DEN on Sept. 1, according to an airport spokesperson.

Although American's holiday flight schedule is similar to that of 2021 — with more than 26,400 scheduled flights for an average of nearly 5,300 daily departures — United has adjusted its schedule to accommodate a projected 20% increase in customers.

"During the Labor Day period, we anticipate approximately 2.6 million customers will travel with United," a spokesperson for the Chicago-based airline said. "This is nearly the same volume we had in 2019 and more than a 20% increase from last year, where ~2.1 million customers traveled with us during the same period [Sept. 1-6]."

United is the only one of the three largest U.S. airlines anticipating Labor Day volume mirroring pre-pandemic numbers.

Although Delta expects more Labor Day weekend flyers — between 2.8 and 2.9 million — than the other major airlines, these numbers don't quite meet Delta's pre-pandemic levels.

"Over the holiday weekend, Delta will operate over 25,000 flights," a Delta spokesperson shared via email. "For reference, Delta flew 3.1 million customers in 2019 and 2.5 million in 2021 over the same period of time."

Related: 7 ways to get free or discounted TSA PreCheck, Global Entry and Clear

Where are people going for Labor Day weekend?

So where are all these people heading?

Among domestic destinations, the top five most booked locations via Hopper were Las Vegas, Denver, Atlanta, Miami and Los Angeles.

Internationally, users are favoring San Juan, Puerto Rico, as the top-booked destination (though, of course, it isn't exactly international for U.S. travelers). Multiple cities in Mexico, the Dominican Republic and Colombia are popular for travel this weekend, too.

"Over Labor Day weekend international travel will account for about 39% of travel over the holiday weekend, up 7 percentage points compared to last year in 2021," according to Hopper. This appears to support the expectations of airports, as both PHL and LAX noted an uptick among travelers opting to leave the country for the weekend.

"In addition to flying to domestic vacation locations (as they did in 2021), Philidelphia’s passengers have demonstrated a strong desire to travel to international destinations in Europe, Mexico and the Caribbean this summer," an airport spokesperson said. International flight traffic at LAX has increased substantially as well.

"Available seats to many international destinations this weekend are two to three times higher than the same time last year, so it looks like a lot of people are taking one last summer trip overseas," an LAX spokesperson said.

Related: These are the world's busiest airports

The combination of holiday weekends and full planes can bring little recourse if flight delays and cancellations start to pile up.

Before you even head to the airport, we suggest having a sense of alternate departing flights that day, just in case your flight is significantly delayed or canceled.

Along the same lines, make sure to download your airline's mobile app, many of which provide real-time flight updates. This will allow you to track your flight, get notified of flight changes and, in some cases, even chat with a representative regarding flight issues.

Being one of the first people to reach customer service can be essential when seats are in limited supply.

Additionally, regardless of which airport you're traveling through this weekend, we suggest arriving early to allow extra time for getting through security. At worst, you end up with more time in the lounge or at the gate.

As always, it helps to be enrolled in programs like TSA PreCheck and Clear, which can help you get through security faster.

Related: How to get into airport lounges

Labor Day weekend will be another test for airlines before they head into the holiday travel season. Operational meltdowns were present on some busy travel weekends this summer, while others went mostly as planned.

"Compared to some of the chaos we saw earlier this summer, airlines have certainly turned in a better performance as the summer draws to a close," TPG senior aviation reporter Ethan Klapper said.

We are crossing our fingers for a busy — but smooth — holiday travel weekend.

Read more: Your flight is canceled or delayed – here’s what you should do next

Related stories
Legislation that could gut credit card rewards set to move through Congress
Would you stay at 1 of these 8 haunted hotels this Halloween?
Southwest winter flash sale: Get one-way flights for as low as $29
You can currently buy points and miles with up to a 100% bonus — but should you?
Featured image by Bloomberg via Getty Images
Editorial disclaimer: Opinions expressed here are the author’s alone, not those of any bank, credit card issuer, airline or hotel chain, and have not been reviewed, approved or otherwise endorsed by any of these entities.