Is Boeing or Airbus Better? We Asked an Airline Pilot

Articles
Howard Slutsken lives in beautiful Vancouver, BC, and loves to hang out at airports and fly just about anything - especially gliders. He's a frequent contributor to many aviation publications and websites.
Follow
Feb. 12, 2019
•
10 min read 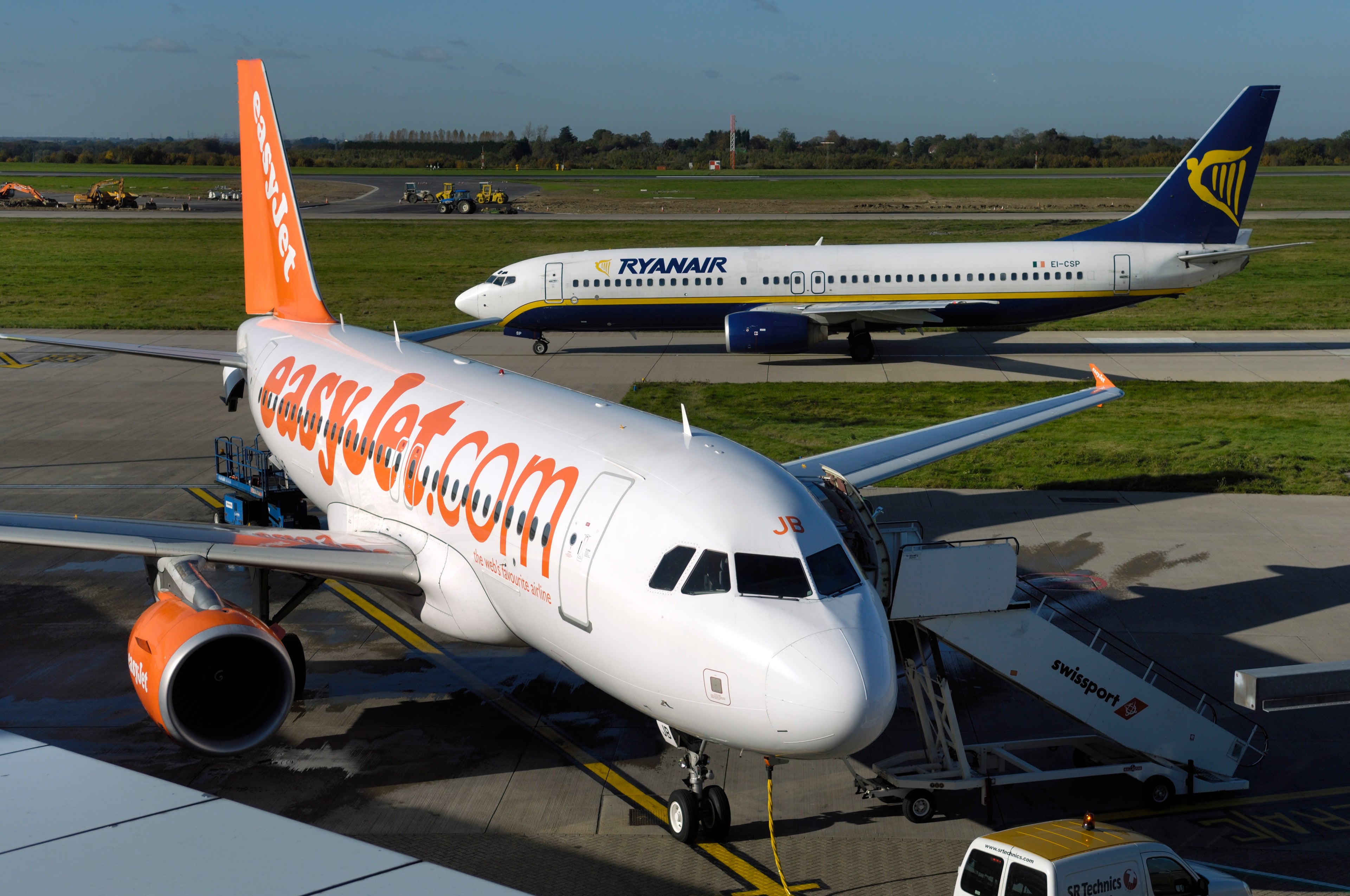 Is Boeing or Airbus Better? We Asked an Airline Pilot
This post contains references to products from one or more of our advertisers. We may receive compensation when you click on links to those products. Terms apply to the offers listed on this page. For an explanation of our Advertising Policy, visit this page.

The corporate rivalry between Boeing and Airbus is the one of the most heated on the planet. The American planemaker and its European rival share the market for large airliners almost 50/50, based on deliveries in 2018, and fight tooth and nail to beat one another. Last year, Boeing delivered 806 jets to customers while Airbus set a new company record with 800 deliveries.

While many flyers may not be able to tell the two apart at the gate, pilots know there’s a big difference. And there are two very different philosophies behind how they fly those two brands of airplanes.

That’s not to suggest that one approach is better than the other.

Let's take as an example the companies' top products, the Boeing 737 and the Airbus A320, respectively the number one and two biggest-selling jetliners ever. They have safely flown countless millions of hours, and both programs have been hugely successful.

Launched in 1984, the A320 was a clean-sheet design that incorporated digital fly-by-wire control systems. It was revolutionary at the time, with side-sticks replacing traditional yokes and extensive use of glass displays instead of mechanical dials and gauges on the flight deck. With the A320, Airbus transformed how pilots interact and fly the airplane. Fly-by-wire meant that pilots sent their inputs to a computer that would then move the control surfaces.

Airbus has continuously updated the aircraft, and its latest iteration is the A320neo, or “New Engine Option,” with more fuel-efficient and quieter Pratt & Whitney or CFM International turbofans. More than 8,600 A320-family aircraft, including the smaller A318 and A319 and larger A321, have been delivered.

The twin-engine Boeing 737 goes back over 50 years, with a first flight in 1967. It was a descendant of two early Boeing planes, the four-engine 707 and the 727 tri-jet. The 737’s cabin and flight deck width are still the same size as the original 707 that first went into service in the 1950s.

Boeing, too, has continuously updated the 737. It’s had four different types of engines and three different wings during its life. Pilots got four generations of cockpits, all which maintained some attributes of the original 1967 airplane.

Over 10,000 737s have been delivered to airlines. The aircraft has been stretched and upgraded over the years, the latest being the 737 MAX series with the latest CFM International turbofans and distinctive winglets. They are so different that the first 737, the 100 model, was 94 ft long and had a maximum takeoff weight of 110,000 lbs — but the latest, the MAX 10, stretches to 144 ft and can weigh up to 194,000 lbs.

But what does a professional, highly experienced pilot think of the planes?

“I love both aircraft for different reasons. Where one comes up short, the other one excels,” said Captain Rory Kay, in an interview with TPG.

He should know. He's flown them all. Early in his airline career, Kay flew the Boeing 727 and the 737s that entered service in the late 1980s, now known as 737 Classic. He went on to be First Officer on the larger Boeing 757 and the twin-aisle 767, before making captain on the Airbus A320, which he flew for years. With over 24,000 hours in the air, Kay is a training and check pilot on the 757 and 767 and will soon move to captaining the Boeing 777, the biggest passenger plane flying for any US airline. He’s also former Air Safety Chairman for the Air Line Pilots Association.

Physical differences aside — and we’ll get to those — the fundamental distinction between the two types is in the flight control system and how pilots fly the plane. On the 737, the pilot’s yoke and pedals are hydraulically boosted and mechanically connected to the plane’s aerodynamic control surfaces: ailerons, elevator and rudder. In a fly-by-wire (FBW) aircraft like the A320, the movements of the side-stick are interpreted by the computers driving the control surfaces. Although there might be a mechanically-connected backup for some controls, the FBW system’s algorithms are designed to simplify aviating and limit extreme maneuvers.

The cockpit of an Airbus A 320 neo. (Photo by Josep Lago/AFP/Getty Images)

“I can’t just put the stick full over on an Airbus and roll it upside down. As long as it’s in Normal Law, it will not let you exceed certain roll and pitch limits,” Kay said. (Normal Law describes the active protections that operate on a regular flight “where everything is functioning as designed,” he added.)

That can be critical when pilots are faced with an emergency escape maneuver, perhaps due to traffic, wind shear or terrain. The system is designed to limit how high the nose can be safely raised, easing the pilot’s workload.

“I can absolutely pull that side-stick hard back, that’s all I have to do. It’s going to give me the best possible climb out, the best escape performance, and the plane isn’t going to stall. That’s one very nice thing about the Airbus FBW system.”

Captain Chesley “Sully” Sullenberger partially attributed his safe landing at the controls of US Airways 1549 to the computer protections that aided the aircraft’s engineless glide into the Hudson River.

But there is a major limitation to the Airbus side-sticks, according to Kay.

The side-sticks aren’t linked, so whichever pilot isn’t flying can’t see or feel what the pilot who is flying is doing with the controls. That’s a major difference from a Boeing’s synchronized yokes, which are linked mechanically. And they’re sitting right in front of each pilot¸ giving both visual and tactile feedback on what the other pilot is doing.

“On the Airbus, you don't know what the other pilot is doing in terms of control inputs whereas on a Boeing, I've got instant feedback on how hard my copilot is working, or how little he's working on the situation. That's always troubled me on an Airbus. I've looked over and my copilot is just mangling the side-stick — left, right, forward, back — like it's a video game or something, and I’ve said ‘Whoa, slow down and take it easy!’”

In 2009, when sensor icing on an Air France Airbus A330 degraded the plane’s built-in protections, investigators concluded that confusion over the pilots’ side-stick inputs contributed to the crash of the plane in the South Atlantic. This tragic accident renewed discussions about the lack of feedback or interconnect between the two sides of the cockpit in aircraft equipped with this system.

Addressing this, BAE Systems developed electronically-coupled “active” side-sticks, with the first installations now certified in the new Gulfstream G500 corporate jet and on military aircraft like the Embraer KC-390 airlifter. Russia’s MC-21, now in testing, will be the first large commercial passenger jet to use the new technology, supplied by Collins Aerospace.

The Airbus and Boeing philosophies on engine throttle systems diverge, too. On an Airbus, pilots adjust the throttles incrementally to taxi and set the levers that sit between the two pilots to command a computer-assigned level of take-off thrust. But once the throttles are moved to the “cruise” position after takeoff, the levers don’t budge, even though the computer may be commanding a change in engine thrust.

At the end of the flight, when the plane is in the flare just feet above the runway — that's when the nose is pulled up so the main landing gear touches down first — the system calls out “retard, retard, retard,” telling the pilots to move the throttles to idle. Airbus calls this an auto-thrust system, whereas Boeing designs its jets with an autothrottle.

With Boeing’s autothrottle system, the thrust levers are “back-driven,” constantly adjusted by motors changing the levers’ position based on the system’s commands.

“With the Boeing, I see the throttles moving and it gives me that feedback. It improves my situational awareness to no end because I know what the airplane is trying to do to the engines,” Kay said.

On the down side, the legacy of the 737’s original 1950s-era flight deck dimensions doesn’t make it a particularly comfortable place to spend a long flight, according to Kay.

“The Airbus has a very quiet and comfortable cockpit, much better than a 737. There’s much less ‘white noise’ in the Airbus, so it’s less fatiguing, and the seats are much more comfortable. And the windows are huge — I really like that.”

“There’s a lot that Airbus does right. If the airline came to me and said, ‘You can only fly either the 737 or the Airbus for the rest of your career,’ I’d go with the Airbus.” That said, “if I had to have my perfect narrow-body plane, it would be a combination of the two. It would be mostly Airbus design, but with a traditional control wheel and back-driven autothrottles.”

Embraer did just that when it developed its own fly-by-wire philosophy for its business jets and newest commercial airliners. The Brazilian company studied the lessons of both Boeing and Airbus cockpits, taking the best attributes of both. And the Airbus A220, originally the Bombardier C Series, has side-sticks, but along with back-driven thrust levers.

As Airbus developed its newest aircraft, including the A330, A350 and A380, it maintained a consistent flight-deck philosophy that allows pilots to transition between aircraft easily.

Pilots flying Airbus planes can be trained in so-called “mixed-fleet flying,” where they can fly a long-haul A330 in the morning, and shift to a single-aisle A321 in the afternoon.

And while the 737 may have its roots in its 1950s-era ancestors, as Boeing has introduced new airplanes over the decades, like its fly-by-wire 777 and 787, it has introduced more computers and electronic aids to the smaller 737 as well.

But the original feud remains. It's still side-stick versus yoke, and Airbus versus Boeing.