My Very First Flight on a Private Jet, Gulfstream's G500 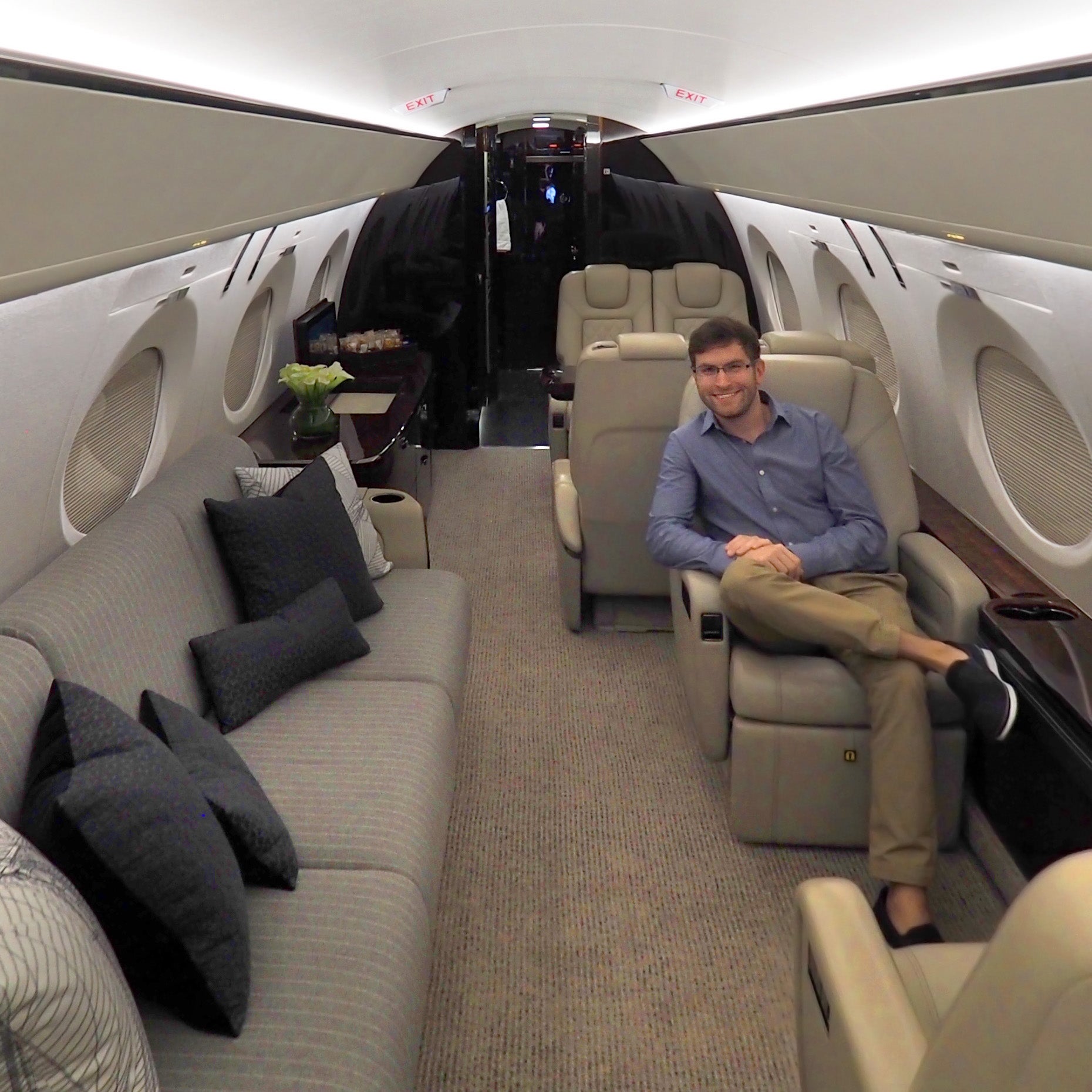 My Very First Flight on a Private Jet, Gulfstream's G500
This post contains references to products from one or more of our advertisers. We may receive compensation when you click on links to those products. Terms apply to the offers listed on this page. For an explanation of our Advertising Policy, visit this page.

If you happen to peruse my personal Instagram page, my life probably looks pretty fly. There are plenty of private jet photos peppered in throughout — from an all-suites Emirates A319 to a decked-out Boeing 777-200LR, these are some pretty impressive (and pricey) planes.

Until now, however, all of those visits were entirely on the ground — I had about 10 minutes to check out that EK jet at the Dubai Air Show, for example, while the only flying I did during my Crystal Skye experience was in a United economy seat between NYC and Florida. This week, that all changed — I'm now a proud member of the private-jet elite, and life will never be the same again.

Okay, that's a gross exaggeration for sure — but I'll certainly never forget my 90-minute "Breakfast Over Savannah" on N505GD, Gulfstream's brand-new G500.

TPG and I had a chance to check out Gulfstream's Savannah (SAV) campus, along with some other journalists, including a visit to the virtual reality design center, a few simulator landings and, of course, the main event: a trip up to 43,000 feet onboard one of the world's most impressive twin-engine business jets.

While a Gulfstream "demo" flight was a first for me, it isn't anything out of the ordinary. This very plane has flown more than 150,000 miles to various destinations around the globe, on a seven-month world tour that brought the aircraft to some 44 cities in 18 countries. Customers were able to experience the G500 in the air or on the ground, with pilots, flight attendants and other Gulfstream staff available to detail everything from the avionics to the cabin amenities.

As for our trip, TPG and I got to enjoy breakfast in a couple of plush leather recliners, prepared on the aircraft by our friendly Gulfstream-employed flight attendant.

TPG requested a ham and scallion frittata while I ordered the shrimp and grits, a Savannah specialty. Champagne and caviar was notably absent, though had we chartered the plane ourselves (which isn't possible with the G500 just yet), we could have loaded up the galley with anything and everything under the sun.

The highlight for me was getting to explore the cabin, though — aside from our incredibly fast, almost eerily silent takeoff, of course.

I quickly fell in love with the gigantic oval windows, too — picture a Dreamliner window, flipped on its side and with a far larger footprint. They really are something else.

There's even a slick window simulation on the pop-out monitor, identifying the towns on the ground as we soared by some 43,000 feet above.

The G500 also offers three exterior cameras, which you can pull up on the cabin displays. There's a forward-facing camera, a downward view, and — my favorite of all — a shot from a camera mounted high on the tail. This demo aircraft didn't include monitors at each seat, though you can outfit your own Gulfstream with any equipment you'd like.

There were two lavatories as well — a small one up front, used primarily by the crew, and a far larger lav behind the rear galley.

With the flight attendant none the wiser, I decided to do a bit of poking around. I opened the top drawer first, where I found a bunch of cosmetics, including the same Bulgari lotions you'll get in Emirates first class and some very fancy looking razors in leather pouches. The next drawer was loaded with full-size toothbrushes, mouthwash, band-aids and a variety of over-the-counter meds. A drawer below that had towels and some super-soft socks. Forget packaged amenity kits — you can build your own on the fly.

Then, after a bit over an hour in the cabin, I got to sit in the jump seat for our approach and landing back at SAV — something you certainly wouldn't be able to do on a commercial flight! The flight deck is far more impressive than any I've seen on an airliner, too, with all-glass avionics, a super-detailed heads-up display and even an infrared camera for zero-visibility landings.

Want to book your own flight in a private jet? There are services that offer charter subscriptions or private jet-like experiences, like JetSuiteX, but that's an entirely different beast. If you're looking for the real thing, sadly it can't (reasonably) be done with points and miles — aside from that pup United accidentally shipped to Japan, unless you're a corporate executive, professional athlete, high-ranking government employee or someone who travels alongside one of the above, you'll probably need to pay your own way, with cold hard cash.

As for the Gulfstream G500, this plane will set you back roughly $45 million, though specialty configurations can add hundreds of thousands of dollars (or more) to that price. Beyond that, there's fuel, landing fees, two pilots and a flight attendant, catering, and parking and maintenance charges, which become even more considerable as the aircraft ages.

Of course there are some less expensive alternatives — the tiny Cirrus Vision jet costs about $2 million, for example, but it flies far slower, holds at most five adults and can only travel roughly 1,250 miles before stopping to refuel. That's all a far cry from the G500, which flies almost twice as fast, with a range of 6,000 miles and seating for 19. But, as they say, you get what you pay for.