Why is my flight canceled because of 'weather' when it's clear outside? 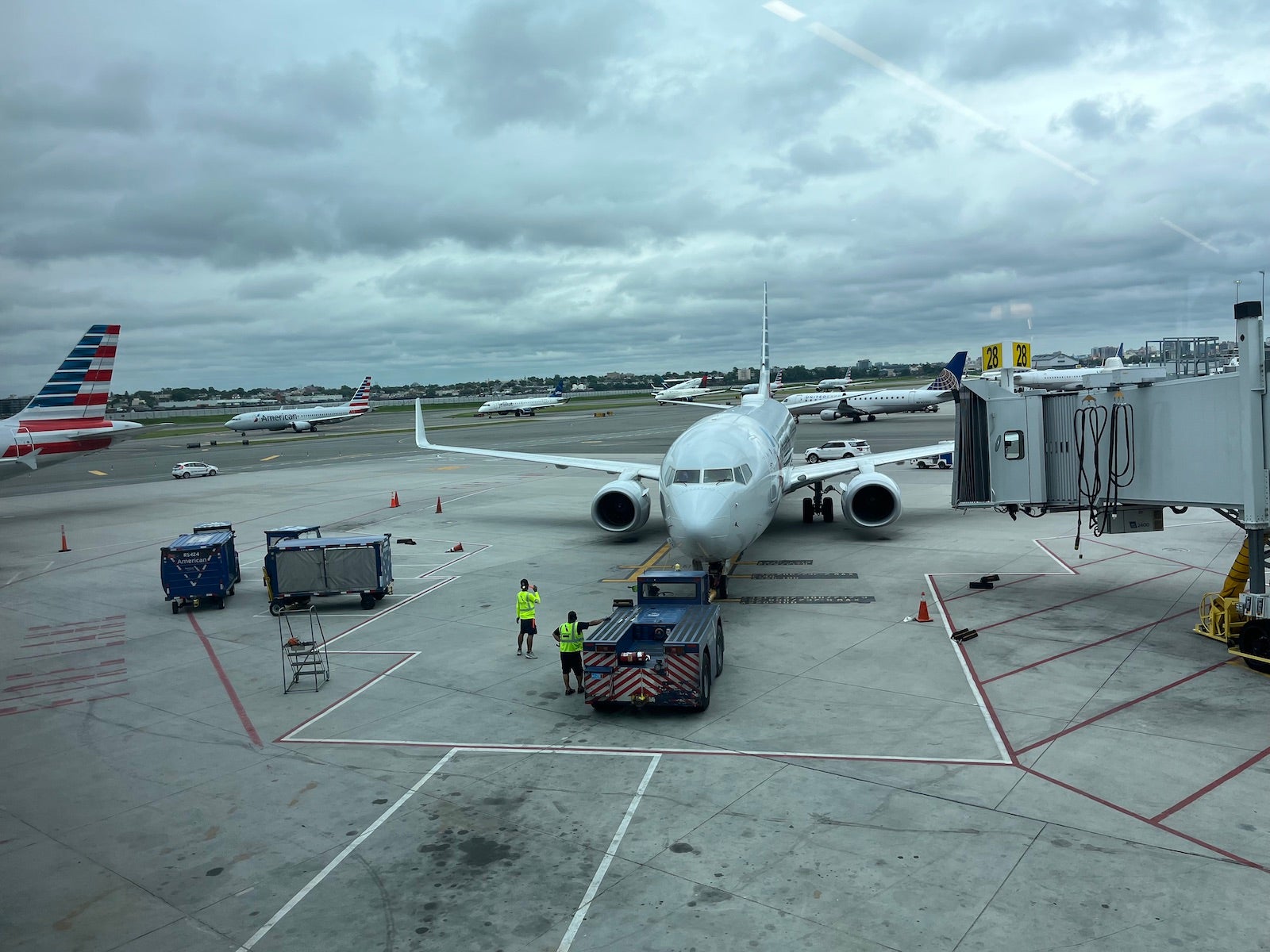 It’s been a rough couple of days for travelers, particularly on the East Coast. Between Thursday morning and Saturday afternoon, data from FlightAware showed that the three U.S. legacy carriers canceled more than 1,600 flights and more than 6,800 additional flights were delayed. New York’s LaGuardia Airport (LGA) was the most affected, with over 30% of its flights canceled Thursday and nearly a fifth canceled on Friday.

The domestic legacy carriers saw hundreds of cancellations, with American Airlines and Delta Air Lines having the most disruptions. Delta blamed the cancellations on a confluence of factors that airlines have run into frequently in recent months: staffing, weather and air traffic control challenges.

The captain on the American Airlines plane I boarded at LaGuardia on Thursday cited similar issues; the flight ultimately did not take off. The pilot said storms earlier in the day had led to afternoon air traffic congestion. There were more than 50 planes waiting to take off at one point, he said.

Looking out the window, you could see planes sitting in a runway traffic jam.

As we deplaned, a number of fellow passengers questioned how the weather could be the reason for this cancellation when conditions outside looked so clear.

It’s a question I asked a longtime industry expert the next day.

Bad weather has a cascading effect

As most flyers have learned the hard way at some point during their travels, it’s not just the weather at your departure airport or destination that can affect your itinerary.

My introduction to this concept came early in life. On the first flight I ever took at the age of 10, the pilot had to divert us around a thunderstorm which added time to our flight and led to my family missing our connection. I guess that’s why I always feel a sense of relief when I make a connection.

“If you’re [at LaGuardia] expecting an airplane and it has to fly through thunderstorms in the Ohio Valley, it’s going to be late to LaGuardia,” Mann told TPG Friday.

Where the real problems can start to unfold, though, is when you get a whole bunch of flights disrupted at a major airline hub, like we saw when bad weather hit the New York area Thursday morning.

In the wake of such weather events, combined with a complex airline schedule for the day, what that means is some planes won't be in the right cities by the time of their next scheduled trips, while others are trying to take off later than previously scheduled.

Related: Summer cancellations and delays mean more reasons than ever to get your airline's mobile app

With jam-packed airspace around busy airports, particularly in the New York area, where you have three major airports, things can get complicated quickly.

“If you have nowhere to send airplanes, you have to stop the airplanes from taking off,” Mann said of the post-weather traffic jams at LaGuardia Thursday — a scenario that could crop up at just about any major airport across the country.

Airlines can sometimes find solutions — particularly at major hubs — such as moving one aircraft to a different route to make up for a gap created in the schedule, Mann said. He noted, though, that this solution doesn’t always solve another problem.

Related: 7 tips to avoid getting stranded by airlines when things go wrong

As I sat on the tarmac for hours at LaGuardia on Thursday, the gentleman sitting next to me casually asked the flight attendant when she and her colleagues would "time out."

She had 12 hours before she’d have to go off the clock, she explained, but the pilots had just a few hours before they would need to take a mandatory rest period. We realized that if this delay went on much longer, this flight would get canceled.

A combination of federal regulations, union rules and airline policies govern how many hours pilots and flight attendants can work. These limitations are in place for the safety of everyone on board.

It’s why Mann describes crew time as “perishable and limited.”

When you get a day like Thursday and crews at a major hub and airports throughout the country spend hours sitting on the tarmac, that can go a long way toward eating up the hours those employees have available to work.

That’s never a good thing for airline schedules, and it's exacerbated by significant staffing challenges that mean fewer employees are available to help cover in such situations.

And when there’s not enough staff available for a flight? “That’s it. It’s over,” Mann said.

This is when airline schedulers have to make “the really tough decisions,” he said, determining which flights are most and least valuable and choosing which to cancel.

That leaves travelers scrambling for seats on alternate flights, which is easier said than done when travel is inching closer to pre-pandemic levels. Particularly in these busy summer months, and around major holidays like Thanksgiving, finding a seat on another flight gets difficult.

Speaking about the most recent cancellations, Delta said canceling a flight is “always our last resort.” An airline spokesperson told TPG on Friday: “We sincerely apologize to our customers for the inconvenience to our travel plans.”

The airline this week said it has been starting the boarding process on flights earlier and allowing planes to “leave when ready,” which the airline said is leading to a higher portion of flights departing five minutes early.

American Airlines did not respond to a request for comment before publication.

Planning for the rest of this summer

The most recent series of disruptions came on the same day TPG reported that U.S. Transportation Secretary Pete Buttigieg met with airline leaders to discuss how they could reach more reliable operations going forward this summer, including making sure they can deliver on the schedules they promise.

For his part, Mann believes airlines and federal regulators must take steps to improve the nation’s air traffic control system, an issue that’s led to much discussion in recent months. He also echoed concerns about the ability of airlines to meet the schedules they publish, suggesting carriers too often use factors like weather and air traffic control as “punching bags.”

We have seen some airlines take steps in recent months to reduce flight schedules to a more manageable level. Delta is the largest carrier to recently announce a summer schedule reduction and said this week it would continue working to alert passengers about cancellations as far in advance as possible.

Mann said things will not be fixed overnight, and suggested travelers be prepared for the possibility that things could go awry during their summer travels. This should include, he said, monitoring a flight’s incoming plane to spot potential disruptions on the horizon.

“There’s really not much you can do except be the best-informed traveler you’ve ever been,” he said.

Featured image by Sean Cudahy/The Points Guy
Editorial disclaimer: Opinions expressed here are the author’s alone, not those of any bank, credit card issuer, airline or hotel chain, and have not been reviewed, approved or otherwise endorsed by any of these entities.