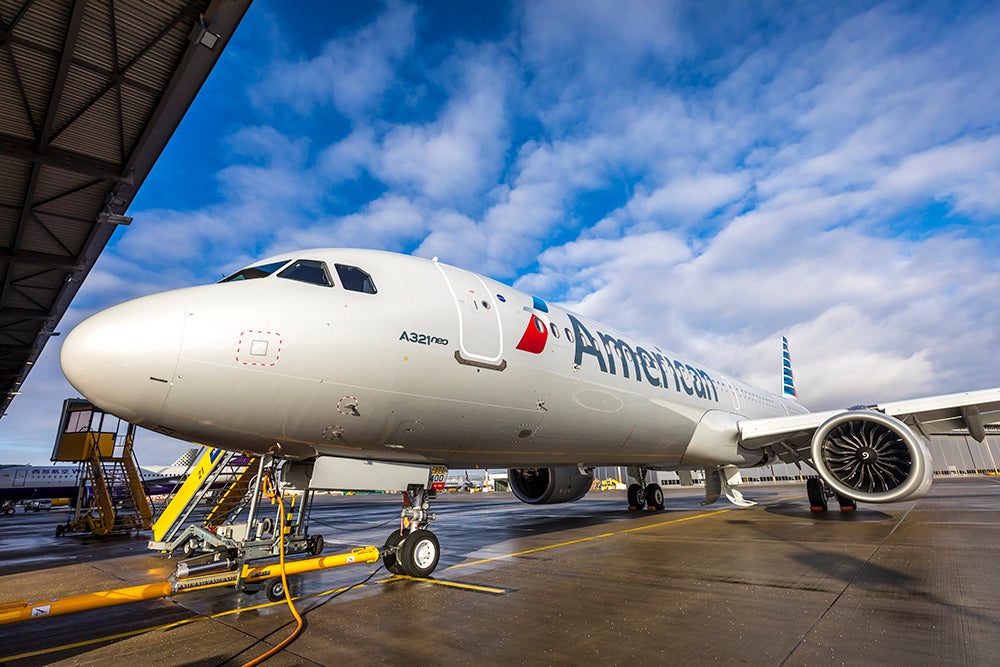 Here's Your First Look Inside American Airlines' Brand-New Airbus A321neo
This post contains references to products from one or more of our advertisers. We may receive compensation when you click on links to those products. Terms apply to the offers listed on this page. For an explanation of our Advertising Policy, visit this page.

In February 2019, American Airlines took delivery of the first of the 100 Airbus A321neo aircraft it had ordered, and that aircraft is entering service for the first time Tuesday, with flights from Phoenix (PHX) to Orlando (MCO) and back.

I will be flying both of those flights to give full reviews to both economy and first-class on the brand-new plane. But, TPG got an early chance to take a look inside the plane while it was on testing runs around the country. Here's a peek inside AA's newest bird:

Huge overhead bins: While we haven't gotten a chance to measure them to compare, American notes that the overhead bins can hold a whopping 65% more bags than those on its existing A321 aircraft. Hopefully this means much fewer passengers will have to check their bags at the gate.

High-speed Wi-Fi: As part of AA's massive project to get high-speed satellite-based Wi-Fi on all mainline aircraft, all Airbus A321neo aircraft will have ViaSat satellite-based Wi-Fi. While it's free to connect to the Wi-Fi network to stream entertainment to your personal device, there's no free connectivity with the ground, even for texting. You can expect to pay $12 for a one-hour pass or $16 for a full-flight pass. Gogo monthly subscribers can connect for free by logging into their account through the "have a Gogo subscription?" link.

Power at every seat: Every seat on AA's A321neo will have both a universal A/C power outlet and a USB plug so you can charge your devices on board.

Days worth of entertainment: While you have to Bring Your Own Device (BYOD), AA's got plenty of entertainment options for you on board. In April, the airline is streaming over 315 hours of movies and over 150 hours of TV shows for free through the ViaSat system. And, as with over 800+ AA aircraft, the A321neo will offer live TV options.

Fuel efficiency: According to Airbus, the A321neo (neo=New Engine Option) is 20% more efficient than the prior version of the plane. That's a huge reduction in the amount of fuel used on each flight, which is great for reducing cost and the impact on the environment. Hopefully, lower operating costs will help keep airfares from increasing.

More first-class seats: AA's A321neo has 20 first-class seats vs. 16 first class seats on its other A321s. That's a pretty remarkable turn of events for an airline that's been stripping business-class seats out of its Boeing 777 and 787 Dreamliner aircraft. This brings the A321neo almost to the top of the list of domestic mainline AA aircraft in terms of economy-to-first-class-seat ratio. Only the very premium-heavy A321T does better:

This strong ratio will make the A321neo appealing for those looking to use their miles and elites hoping for an upgrade.

No screens: Just like on AA's new Boeing 737 MAX aircraft and retrofit 737-800 aircraft, there are intentionally no in-flight entertainment screens built into any seatback. Instead, passengers will need to "BYOD" (Bring Your Own Device) to watch the extensive entertainment options being streamed through the Wi-Fi system. Just make sure to download the American Airlines app to stream it using your phone, due to rights management software.

To create the space for those extra seats -- including the extra space for the four more first-class seats -- AA had to reduce seat pitch throughout the aircraft. That's what we saw happen on AA's 737 MAX and Project Oasis 737-800 aircraft with the move from 160 to 172 seats. Unfortunately, this tighter pitch is going to be the new standard throughout the AA fleet once "Project Oasis" is finished.

Slimline seats: With more seats taking up the same amount of space, our initial concern was that legroom would be squeezed. Well, there's good news and bad news. The good news is that there's plenty of legroom. I've seen a six-foot five-inch passenger sit in 30-inch pitch seats without his knees touching the seat in front. The bad news is the legroom comes at the expense of seat padding. And with the A321neo's longer range, this could be a pain in the butt (literally) on long flights.

This post has been updated to correct the total number of seats on the American Airlines A321neo.