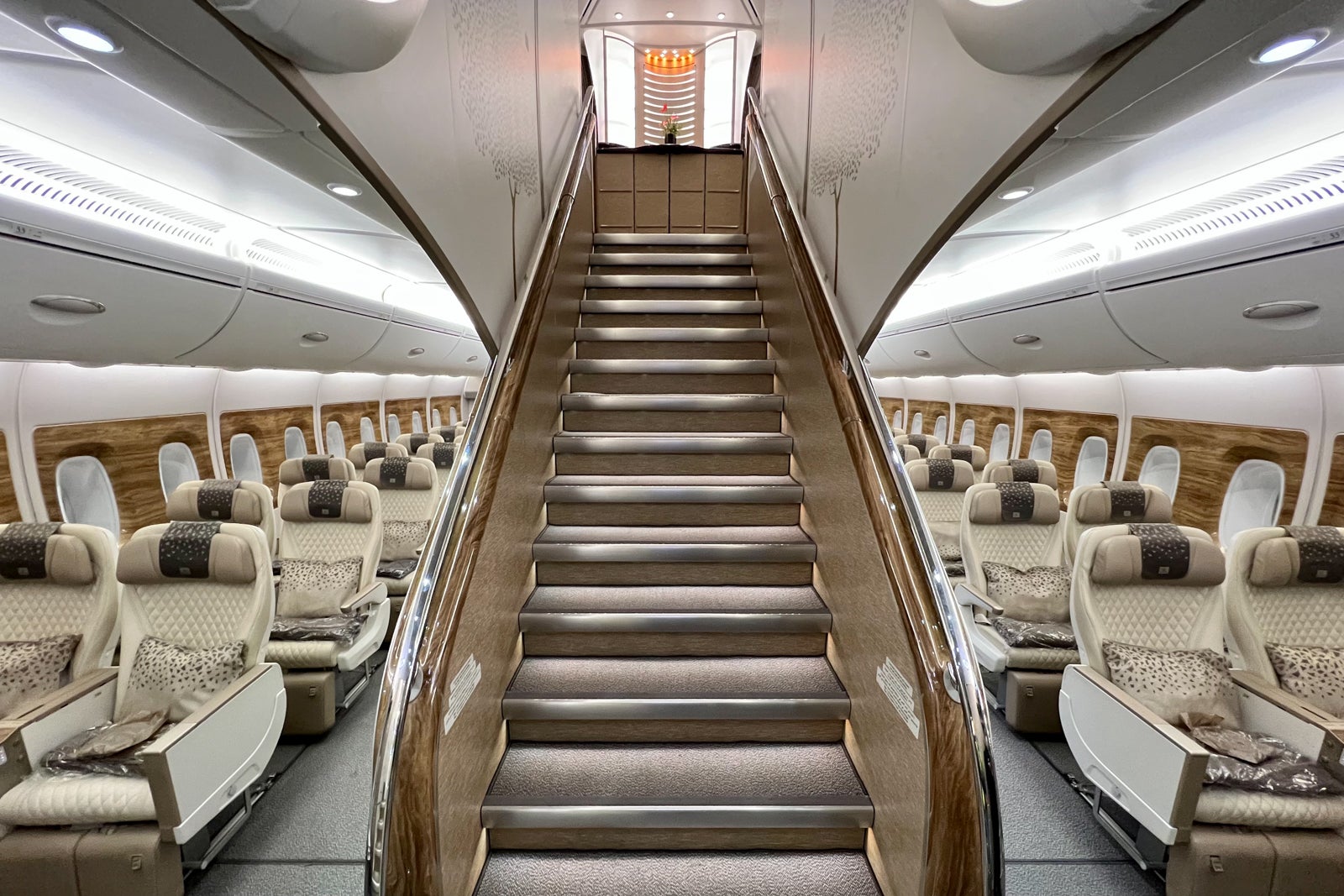 The Dubai-based carrier kept the new product under wraps until it was ready for a grand reveal on its latest Airbus A380 double-decker.

In the year since taking delivery of its first premium economy-equipped A380, the airline has rolled out the new cabin and seats on a grand total of just five other jumbo jets, making it one of the most elusive products to fly.

I finally had the opportunity to track it down on a recent trip from New York-JFK to Dubai (DXB), and I was truly impressed. While you can take a look at my review for a detailed breakdown of the experience, 14 things caught me off guard as a first-time Emirates premium economy flyer.

It's a (modest) splurge

Your first question might be, “How can I fly on Emirates premium economy?”

Well, snagging one of these recliners is a bit tricky at the moment. For now, the airline has just six Airbus A380s equipped with the new cabin. However, it’ll eventually be retrofitted on 105 more jets in the coming years. For now, though, you’ll find it flying to New York (JFK), Frankfurt, Germany (FRA), Paris (CDG) and London (LHR) on select frequencies to and from Dubai.

Once you’ve found a flight with the new A380, the upcharge for premium economy is much more reasonable than I’d originally anticipated.

There aren't any mileage options for now

Emirates isn’t currently selling premium economy as its own cabin.

If you’re looking to redeem miles for the experience, you’ll need to first book an economy-class award and then pay out of pocket for the seat upgrade.

Like most major airlines, Emirates’ premium economy tickets don’t include lounge access. Instead, I was offered the chance to purchase a day pass to the Emirates lounge at JFK for $100.

Instead, I chose to use the American Express Centurion Lounge located just steps away from the TSA checkpoint in Terminal 4. The lounge was open until 9 p.m., which meant that I had to fend for myself for just 20 minutes before boarding began.

Of course, it’s possible that Emirates will ultimately rethink its premium economy lounge policy, but for airports with top-notch third-party lounges, it was no bother.

The first thing I noticed when I stepped foot on the plane was how luxurious the premium economy cabin felt.

Between the textured cream leather recliners, Emirates' signature ghaf tree motifs and the wood paneling along the walls of the cabin, the premium economy section looked a lot more like business class than I was expecting.

Top it all off with some stylish mood lighting, including Emirates’ starry night sky on the cabin ceiling, and the ambiance felt downright luxurious.

Another tasteful touch was the window shades.

Instead of a traditional manual shade, Emirates added electronic ones that resembled those from business and first class.

Though the functionality was no different from a standard window shade — both block light completely — it’s the small details that make all the difference.

Calf rests save the day

I never would’ve imagined that a well-padded calf rest would be enough to make a premium economy recliner dramatically more comfortable than your average airplane seat.

The window seats aren’t actually flush with the window

In the coach cabin, many flyers like resting their heads on the cabin wall when seated at the window.

Unfortunately, that’s not possible in Emirates’ premium economy. Due to the plane’s curvature, the window seats are offset a few inches from the wall.

If that would bother you, then I’d recommend choosing an aisle seat instead.

Welcome to the purser’s office

As you enter the main deck of the Emirates A380, the first thing you’ll notice is a beautiful staircase that leads up to first class.

What you might not notice, however, is that there’s a small door at the base of the staircase.

Inside that door is a tiny office for the purser's use during the flight. Fortunately, that didn’t seem to bother any of the passengers seated nearby, but it’s something to consider if you’re planning to sit in one of the first few rows on the port side of the plane.

While Emirates' seat was one of, if not the, most comfortable premium economy products I’ve experienced to date, it sacrifices one important component: storage.

There’s a small cubby between the center console, as well as a shallow shelf underneath the inflight entertainment screen, which are best used for a pair of shoes and an AirPods case, respectively.

For everything else, you’ll likely need to use the overhead compartment.

Though every jet in the airline’s fleet offers internet access, the speeds and reliability have been hit-or-miss in my experience.

On this A380 jet, however, the $19.99 flight pass kept me online throughout the flight without any hiccups or outages and speeds were decent. I measured upload and download speeds of nearly 1 Mbps and 9 Mbps, respectively.

Service is still a work in progress

Though the “hard” product is one of the best in the sky, the service and amenities left something to be desired on my flight.

The airline is currently designing a unique premium economy service concept, which will likely launch as the airline retrofits additional jets with these cabins.

Until then, most of the “soft” amenities — food, drinks and service flow — are the same as you’d find in coach. For instance, lthough the flavorful gobi masala with basmati rice I enjoyed for dinner was delicious, it was served in foil wrapping on a single tray with other plastic-wrapped bites, which left it feeling far from premium.

Likewise, the kits handed out by flight attendants had essentials like a toothbrush and eye mask, but no nicer products such as moisturizer or lip balm like you might expect on other airlines.

Hopefully this will change over time as Emirates more fully develops its premium economy offerings.

One of the seat elements that surprised me most was the relative dearth of electrical outlets.

For a newly designed product, I was shocked to only find one universal AC power outlet for every two premium economy recliners.

The good news is that each seat has a USB-A and USB-C charging port, but it certainly isn’t ideal for two strangers to share one outlet for powering laptops and other large devices.

The bulkhead isn’t necessarily the best

Some people love the bulkhead, others hate it. And the first row in Emirates premium economy is sure to draw a similar polarizing reaction.

Seats in Row 33 have significantly more legroom than those in the back of the cabin. That's the upside.

The downside is that there’s no cabin divider between premium economy and the forward lavatories or cockpit, which meant that there was lots of foot traffic and light pollution in this area. If you have trouble sleeping or relaxing on planes, choose a place farther back in the cabin.

Not all premium economy recliners are created equally on Emirates.

While there are drawbacks to sitting in the bulkhead and window seats, you should also beware of choosing an aisle seat on either side of the plane.

That’s because there’s a small entertainment box in this area that blocks some of the under-seat storage.

It’s not a major deal, but it’s certainly something to note if you’re planning to fly Emirates' new product.

In my opinion, Emirates has a winner on its hands with its new premium economy seats and cabins.

With supremely comfortable recliners and a luxurious design, it's a great way to fly without breaking the bank for a business-class ticket.

But before your flight, don’t forget that there are some things that might catch you off guard, just like they did to me on my first flight in Emirates premium economy. By keeping a few of them in mind, you can make sure that you have the experience you want on your own trip and avoid a few (admittedly minor) pitfalls that might detract from your experience.

Related stories
Legislation that could gut credit card rewards set to move through Congress
Would you stay at 1 of these 8 haunted hotels this Halloween?
Southwest winter flash sale: Get one-way flights for as low as $29
You can currently buy points and miles with up to a 100% bonus — but should you?
Featured image by (Photo by Zach Griff/The Points Guy)
Editorial disclaimer: Opinions expressed here are the author’s alone, not those of any bank, credit card issuer, airline or hotel chain, and have not been reviewed, approved or otherwise endorsed by any of these entities.