Sunset for the Triple Seven: Inside the last flight of Delta's Boeing 777

Articles
Alberto Riva Alberto runs our flight reviews and oversees special projects across several verticals. Previously, he was the managing editor of Vice News and worked at Bloomberg and CNN, where he was constantly trying to convince people to do more stories about airplanes. He speaks Italian, French and Spanish and one day he’ll be better at German.
Follow
Nov. 01, 2020
•
7 min read 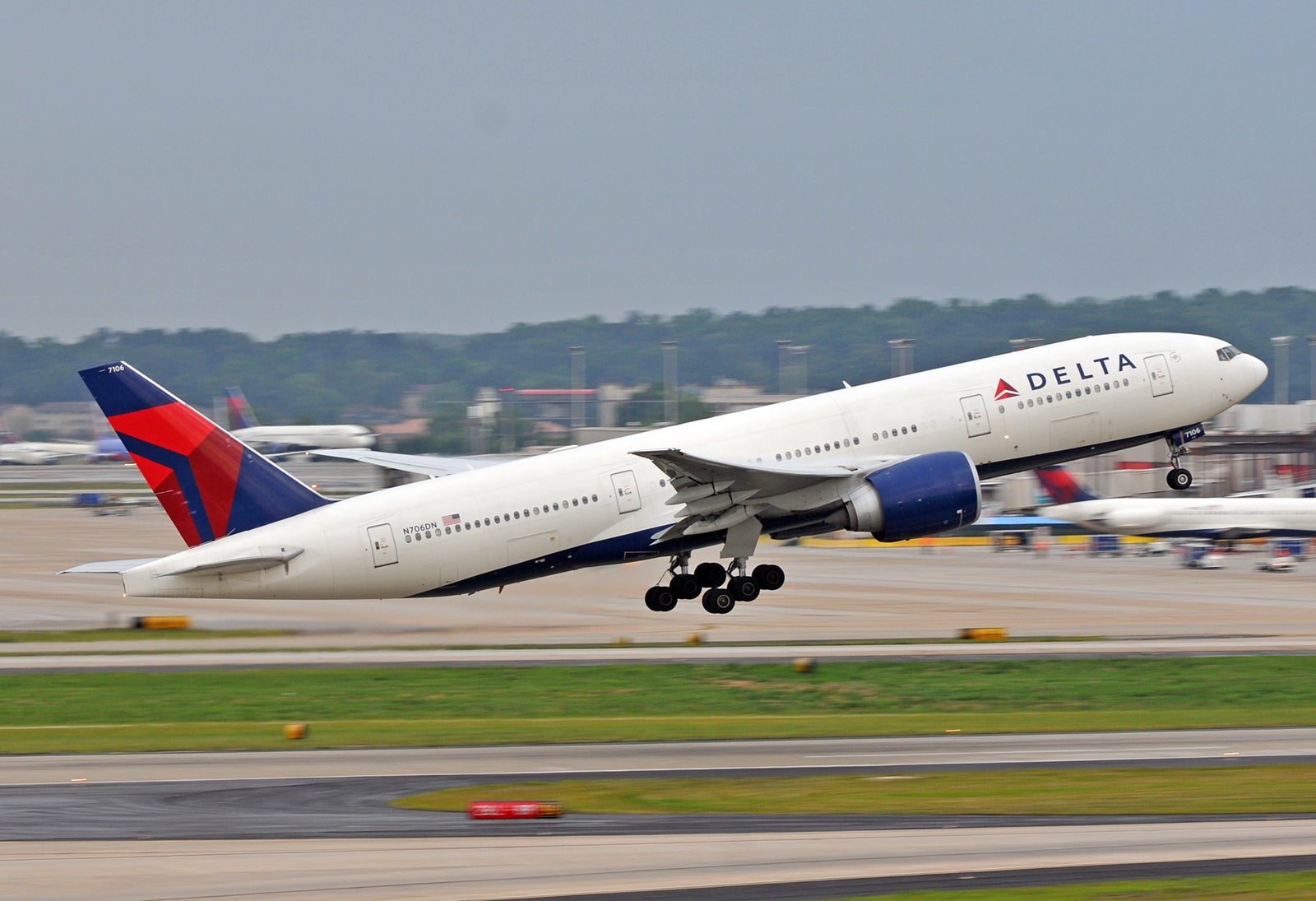 Sunset for the Triple Seven: Inside the last flight of Delta's Boeing 777
This post contains references to products from one or more of our advertisers. We may receive compensation when you click on links to those products. Terms apply to the offers listed on this page. For an explanation of our Advertising Policy, visit this page.

To a casual observer in the cabin, Delta Air Lines flight 8777 from New York to Los Angeles on Saturday might have looked like a run of the mill hop from coast to coast, one of many crisscrossing the country every day.

But at a closer look, it would have become clear that this was not a normal coast-to-coast flight like we used to have before the pandemic.

All the middle seats, blocked by Delta’s social-distancing policy, were unoccupied, and everybody wore a mask — but most importantly, the vast majority of the passengers behind those masks weren’t regular flyers just getting from JFK to LAX. They were aviation enthusiasts, flying to California on the last run of a popular airplane that’s fallen victim to the pandemic: Delta’s former flagship, the Boeing 777.

Because of the drop in traffic this year, the biggest twinjet ever made has become too big for Delta to fly economically. Its almost 300 seats are tough to fill these days when there isn’t a planeload of aviation geeks who want to go on a last ride, so Delta is phasing it out in favor of the Airbus A350. The Airbus doesn’t fly as far, but offers much better economics.

The demise of the 777 is bad news for the passenger experience in coach class, where Delta was among the few carriers in the world retaining the original 3-3-3 seat layout that Boeing had originally designed. Most other airlines that fly 777s have squeezed in one more seat in a 3-4-3 layout, and that made Delta’s Triple Sevens very popular among passengers, by contrast.

“Retiring a fleet as iconic as the 777 is not an easy decision,” Delta CEO Ed Bastian said earlier this year. “I’ve flown on that plane often and I love the customer experience it has delivered.”

“Flying to Australia was the best on Delta,” reminisced Craighton Miller, a flight dispatcher with regional carrier Endeavor Air who flew the 777 across the Pacific. “Oh, that flight was long!” The 777 was the first twin-engine airplane that could fly it nonstop, breaking into the exclusive long-haul domain of the four- and three-engined jets.

Yan Chan, a defense contractor, loved the Triple Seven so much that he showed up at the gate with a model Delta 777 he asked his fellow avgeeks to sign.

Max Moncrief, a ramp trainer with Delta, came on his day off to salute an airplane that took him, he said, “all over the world.”

And at the front of the jet, half of the Delta One cabin — sporting the individual suites that the airline had just spent millions installing, before the pandemic — had been taken over by members of the Delta Diamond Medallion Flyers, a Facebook group for people who have the highest elite status on the airline. Buoyed by free biz-class champagne, they had clearly come to party, lowering their masks only to drink from the special cups they had made for the occasion.

Not everybody was so into it.

“I don’t understand the excitement about it,” said Mel Bollom, who had come from Wisconsin to chaperone his young, aviation-enthusiast grandson Cooper, “but I am amazed by the enthusiasm.”

About 10 percent of the people on board, according to a quick estimate by a flight attendant, were normal passengers like him — a number that gives an insight into the scale of the problem Covid-19 has given the airlines. Without the avgeeks filling the jet on this one special occasion, the flight would have gone 90 percent empty.

And that’s why Delta’s Triple Sevens — even if they are at most two decades old, which is young in airplane years — are going away.

According to a study by the International Council for Clean Transportation of airplanes flying on North Atlantic long-haul routes, the Airbus A350 is the most fuel-efficient jet currently used to serve that very important market, while the 777 is among the worst performers. Delta says the Airbus burns 21 percent less fuel per seat than the 777 it replaces.

The two jets have similar capacity, both seating around 300 people, but the A350 is a generation later. Thanks to the use of composite materials, it’s about 30 percent lighter, and it also has newer engines.

Until the pandemic reduced air travel to a trickle, the higher fuel burn of the Boeing was not an issue. Delta flew its Triple Sevens full, which made them profitable. It had also just refurbished their interiors, a sure sign that an airline plans to keep a plane type in the fleet for a while — especially if that airline is Delta, known for investing in maintenance and updated cabins to keep its jets longer than many competitors do.

But when an airline is flying planes almost empty and burning through $750 million a month, fuel savings matter a lot. That means it’s curtains for the airplane that just three years ago had inherited from the 747 the title of biggest and heaviest in the Delta fleet.

None of that mattered on Saturday, though, as the 777 branded on the fuselage as The Delta Spirit crossed the U.S. with its complement of socially-distanced aviation geeks. People were there to celebrate another storied airplane that’s going away, like so many 747s and A380s this year.

“You made this flight extremely special,” Captain Tim Freeman told his passengers on the intercom as the 777 began descending from 40,000 feet. “This is my final landing with the Triple Seven, so make sure to say it's a nice landing.”

Captain Freeman did make a nice landing at LAX, and many of the avgeeks onboard saluted his smooth touchdown with something that frequent flyers never do, as if to highlight the special occasion: they clapped.

After the 777, the captain will go on to fly Delta's new flagship, the A350. The first officer, Scott Gottschang, will become a captain himself, on the short-haul Airbus A320.

For the airplane they flew to Los Angeles, though, the future is not as bright.

A few hours later, having disgorged its final passengers into a near-deserted terminal, The Delta Spirit departed one last time, headed for storage — and likely recycling — in the California desert. As the sun went down over the Pacific, Delta’s last 777 gave one of those passengers, watching from a nearby terrace, a sight that summed up a career: it took off, literally, into the sunset.