Articles
Alberto Riva Alberto runs our flight reviews and oversees special projects across several verticals. Previously, he was the managing editor of Vice News and worked at Bloomberg and CNN, where he was constantly trying to convince people to do more stories about airplanes. He speaks Italian, French and Spanish and one day he’ll be better at German.
Follow
June 17, 2020
•
7 min read 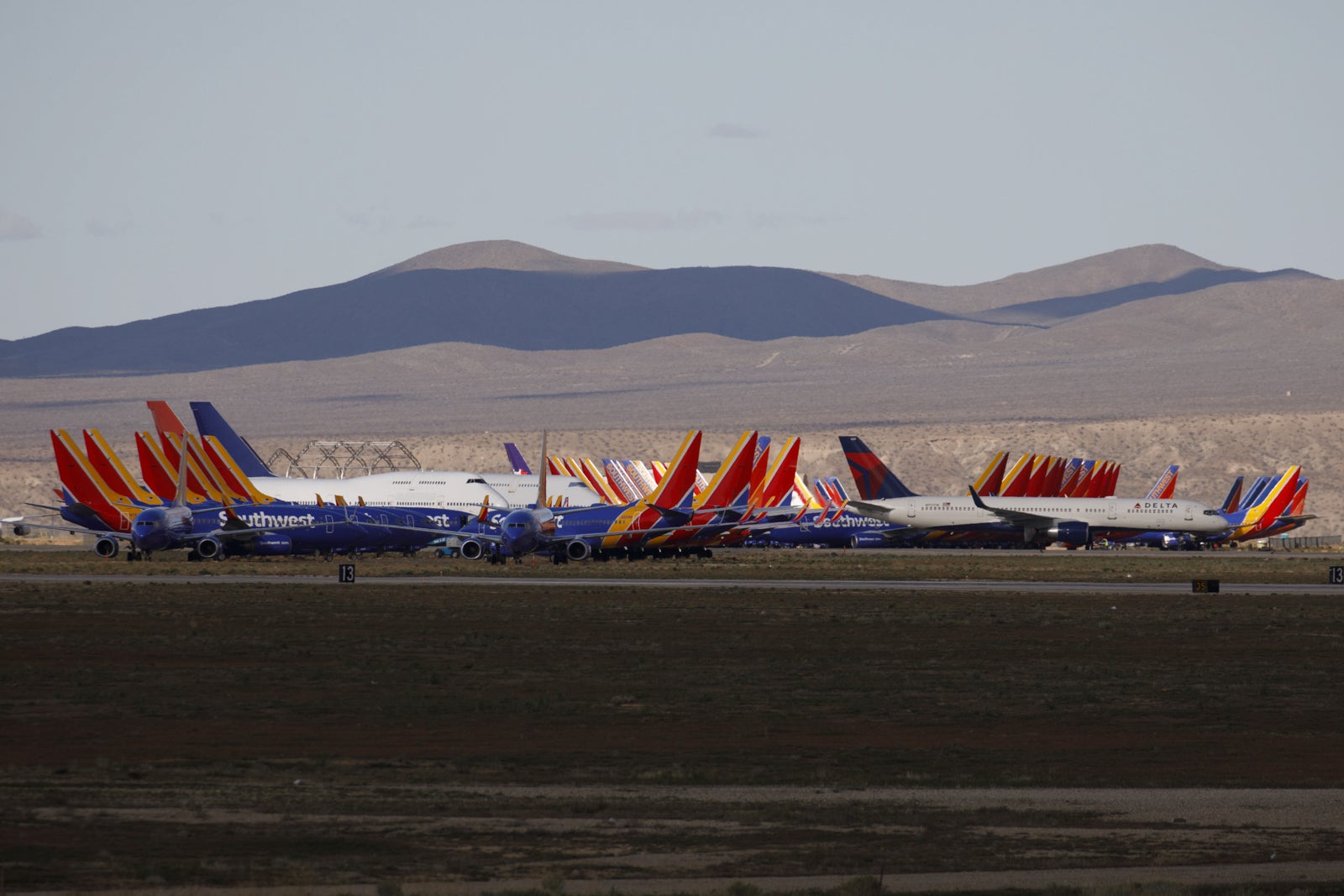 Here's what it takes to get planes back in service after they've been in storage
This post contains references to products from one or more of our advertisers. We may receive compensation when you click on links to those products. Terms apply to the offers listed on this page. For an explanation of our Advertising Policy, visit this page.

After three months with airplanes and airports often completely deserted, U.S. airlines are beginning to bring planes back into service. Jets that have been grounded for months are flying again. Hundreds are returning: American Airlines has brought back 64 stored jets for its June schedule and plans to bring another 141 back from storage in July. Delta will resume flying 120 of its grounded jets between May and July. The other majors are also taking planes out of storage.

That is a lot of airplanes, but there are hundreds more still parked at airports all over the U.S. with no prospect of returning to the air soon. Some will have to wait for a return of demand to pre-pandemic levels; others will never return to airline service, as carriers take advantage of the crisis to update and streamline their fleets.

For more news about travel and flying, subscribe to our free daily newsletter

But what does it take to bring an airplane back to active service?

It's a complex process, involving a lot more than sending a crew to pick up the jet and fly it back to the airline's hub to begin carrying people again.

In many ways, bringing a plane back is simply the reverse of the procedures involved in putting it into storage. But even "storage" isn't a simple concept. Are we talking about parking an airplane for a few weeks, maybe a month or two? Or grounding it for longer, potentially years, with a view to bringing it back to service one day — or maybe selling it for parts?

That is the key difference for airlines, and for the companies that store airplanes for them. When they are stored, it's typically in the southwestern U.S., where the dry high-desert climate helps prevent corrosion.

Vandi Cooyar leads one of those companies. He is the president of Logistic Air, which manages aircraft storage at an airport popular with airlines for parking unwanted jets: Pinal Airpark in Marana, Arizona, near Tucson.

"There's short-term, or active, storage, when an airline tells you they will fly the plane within two months" or so, Cooyar said in an interview. Then there's long-term storage, when "for instance the airline thinks it won't fly for six months or a year." What happens to the airplane is very different, both coming in and going out, depending on which option the airline chooses.

This is what's happening to many, if not most, of the thousands of jets grounded by the coronavirus in the U.S. They are essentially taking a long vacation out West — or at airports all across the nation, since this crisis is so bad that there are way more idled planes than space available at desert airfields — and will, with any luck, be back flying soon.

This option is called active storage because the plane is ready to go at short notice, responding to changed demand. All the onboard electronics, known as avionics, stay on the plane; so do, of course, the engines, including the auxiliary power unit or APU, a small turbine recessed in the tail that does not provide thrust to fly the airplane but powers systems on the ground.

"There's no taping of the engines or windows," Cooyar said, referring to the coverings designed to keep out the elements (and the wildlife). The plane's systems are kept active and checks are conducted at set intervals, typically every seven, 14 or 21 days. Every week, for example, technicians may "do things like start the APU, run the AC and cool off the inside, light up the avionics," Cooyar said. Every two weeks, "you start the engines and give them an x amount of power." These activities can be done by personnel employed by the storage company, or by the airline's own staff.

How long can this go on? "As long as you want to pay," Cooyar said. Active storage is more expensive than long-term, but it also offers far more flexibility to meet demand and put the planes back in the air, where they make money for the airline.

"It's a much simpler reactivation," Cooyar said. Airlines still have to make sure that equipment like onboard life vests has not expired, but otherwise, all they have to do is give the storage facility notice that they want to reactivate the airplane, or airplanes, identified by a specific tail number — and send pilots to ferry them to an airport where they will resume commercial service.

Parking planes for the long run involves quite a bit of labor up front, but is cheaper afterwards: "Up to $3,000 per aircraft per month," Cooyar explained, adding that figures can however vary greatly, depending on several factors.

When a jet comes in for long storage, "you would cover engines and windows, put additive in the oil because you're not starting the engines" and even add "bags of desiccants to absorb moisture" — just like the packets of absorbent material you find when unboxing a new electronic device, but much bigger. Certain avionics are removed and kept in an indoor facility, and "sometimes there's an additive in the fuel system, if you are in a moist area." It's easy to spot planes in long-term parking: they are covered up like a boat mothballed for the winter.

“For storage, you have quite a lot to do in the beginning, and then you can keep the aircraft with very, very little maintenance," Christoph Maier, Customer Manager for Scheduled Maintenance Services at Airbus, told TPG last year. "You don’t need to regularly power up the aircraft electrics, hydraulics and pneumatics,” he added.

Airbus and Boeing both have their own standard reactivation program that must be followed to reactivate an aircraft after long-term storage, Cooyar said. This mainly involves reversing the processes done to preserve the engines and APU, draining any moisture and remaining fluids, inspecting the tires and making sure that all bearings are lubricated — and putting back in all the avionics that had been removed earlier.

Ultimately, though, it's not only market demand that decides who gets to fly again among the many stored airplanes. Factors like maintenance schedules and seating configuration matter in an airline's decision, Cooyar said. Planes with older seating that does not feature an airline's newest hard product might get axed first, since reconfiguring them is expensive. The same might happen to those nearing the flight-hour total prescribed for a major (and costly) maintenance check.

And in this environment, with airlines losing billions of dollars, no airplane is safe from the scrapyard — just look at Delta's Boeing 777s, which will all be retired despite being relatively new birds.

"I think not all the planes I have in short-term storage will go back to airlines," Cooyar said. "Some will go back to the leasing company. Some will be parted out. And sometimes, the airline decides to phase out the entire fleet."