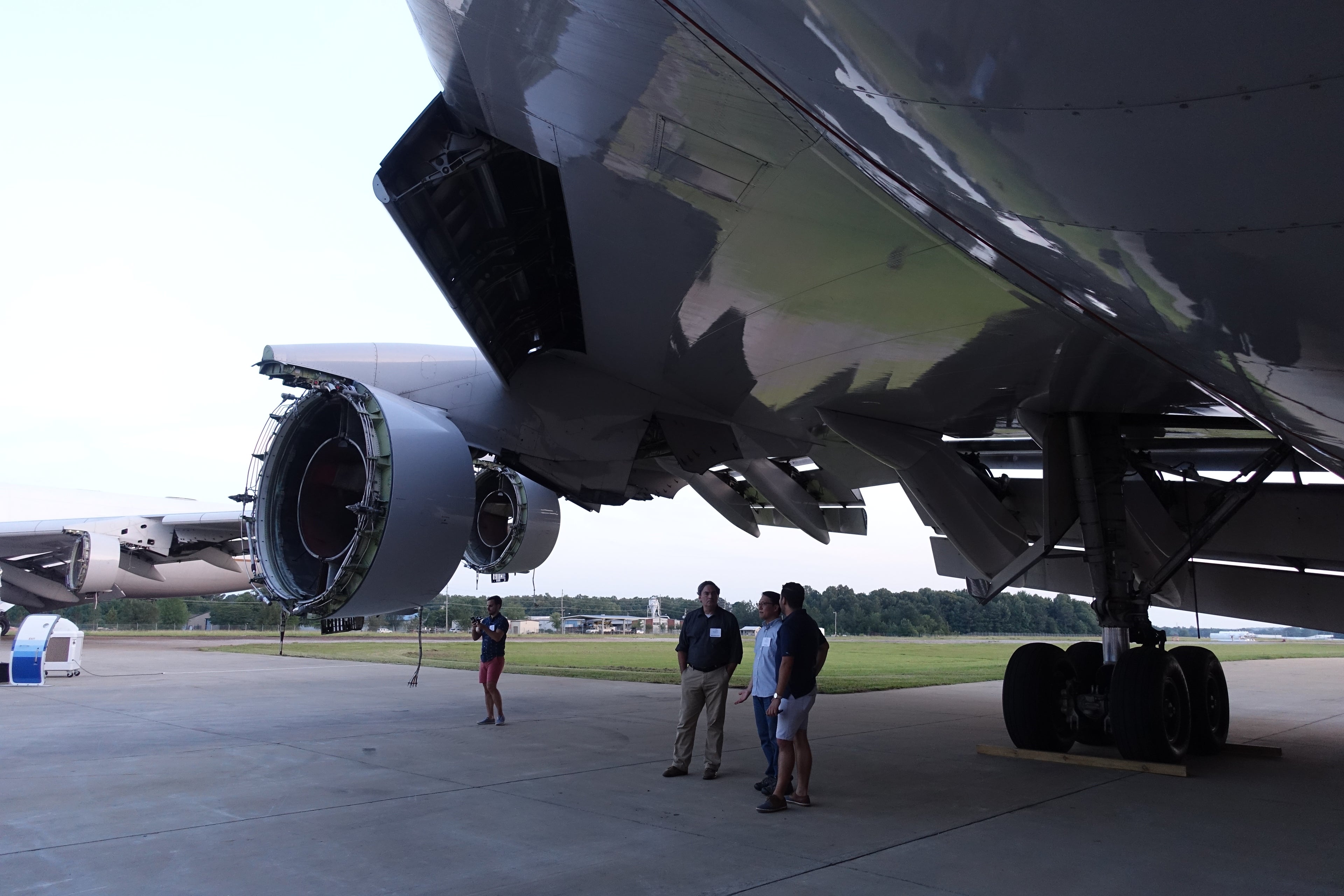 Since announcing its retirement from the fleet in 2017, United has been honoring its beloved 747. From surprise celebratory domestic and international legs to an all-out party flight between San Francisco and Honolulu, the folks at United are certainly dedicated to the Queen of the Skies. But where do those legendary jets go after they are retired? We tracked them down to Victorville, California (VCV), where TPG Editor-at-large Zach Honig captured some stunning photos from above.

But that wasn't their final home. As we found out, they were just undergoing so-called pre-disassembly work: Crews were removing branded onboard service items like coffee pots and galleys. But to get dismantled and recycled, they would have to go to Tupelo, Mississippi. And that's where we caught up with the last United 747s for one last time, watching them get undergo their final stage — before coming back, of course, reincarnated into other objects. Aluminum recycles.

As we announced earlier this month, United decided to do one last, special event — people could bid miles to come to Tupelo. Some of the airline's most dedicated flyers, MileagePlus loyalty members, employees (and media) could visit the company that would be taking apart and recycling these jumbos, piece by piece. The event would conclude with an ultra-AvGeeky dinner between United's 747s.

Most people know Tupelo, 90 minutes from Memphis, Tennessee, as the hometown of Elvis Presley. Hardcore AvGeeks know it better as TUP, the airport where Universal Asset Management takes apart airplanes.

The day's guests had come from all over; one family even flew in from Honolulu. Most were avid United customers and MileagePlus members; several people I spoke to had been on United's final 747 flight ever, which flew from San Francisco to Honolulu. We'd be visiting that very bird one last time. Joining us for the day was a collection of United employees.

On the bus to Tupelo, I got to chat about United loyalty with some of the MileagePlus and United teams. The winning bids had clocked in with a combined 1.3 million miles.

What They Do in Tupelo

Universal Asset Management (UAM) takes apart airplanes that have been determined to be worth more as parts than flying people. That is, when an aircraft's (economic, not nostalgic) worth is less than the sum of its parts, the good folks at UAM take it apart, store the parts and resell them whenever possible. In other words: When an airplanes goes into storage in the desert, sometimes it returns to service. When it lands at TUP, it will never take off again — but some of its parts will.

And they make good use of every single part. Notice anything peculiar about the bench right outside the UAM plant? (Hint: it's from an airplane wing.)

Snacks in the break room were served on what was in a previous life a leading edge slat, located on the wings.

CEO Keri Wright, a pilot herself, her team and Jim Garcia, a United manager who handles the airline's relationship with UAM, led their visitors around the enormous warehouse. The company handles airplanes and parts for airlines all over the world. In fact, there are only five or so competitors that do what UAM does, a one-stop shop for "asset" (aka parts) management.

Instead of having to rely on several specialized services for financial modeling, aircraft disassembly, certification, resale and other aspects, UAM does it all. Some airlines, like United, have very close relationships with UAM, which buys their aircraft and parts and helps replace existing ones.

And that's what these United 747s are doing there. UAM now owns them, and is reselling them piece by piece and recycling what's left. Notice the lack of engines? As some of the most valuable parts (and four of the only pieces of these giants that are not managed now by UAM), those are the first to go.

The strong relationship with United means UAM often has a United airplane on site. More specifically, the company handles lots of classic 737s, airplanes that have many forward-compatible parts (meaning, they can be used on current generations of the 737).

In fact, even the table in the break room is made from a classic 737-500 — one of its horizontal stabilizers to be exact. The chairs surrounding it are retro Malaysian Airlines first class seats. And notice that fuselage piece on the back wall. Does it look familiar? Yes, it's from a Frontier Airlines plane.

Many of the hallways at UAM are decorated with registration numbers and other aircraft parts. D-AIGB was the tail code of an Airbus A340 flying for Lufthansa, scrapped at TUP in 2014 after 20 years in service.

Before we checked out the parked 747s, we were lucky enough to get a tour of UAM’s gigantic asset warehouse, where thousands upon thousands of parts are carefully labeled, sorted and packed, as they wait, shelved, until they are called back into service.

This is not your average warehouse. Standing at some 450,000 square feet, it means that UAM can hold onto parts longer than the competition, giving them a competitive edge.

In here, you can find just about any piece of an airplane from carriers around the world, from windows to doors, lading gear struts to tires, flaps to navigation lights, humungous engine cowlings to old seats and much more. Stay tuned for a later post about more of these jaw-dropping components — or "assets" — at UAM.

And a significant chunk of an A340's main landing gear.

Lots and lots of landing gear.

Plus any wheels and tires that may go along with them.

Every single asset in this warehouse is carefully tagged, labeled and recorded. In fact, the UAM team has an extensive record of each asset, dating back to its manufacturing, even if it's from decades prior. Of course, they also track the number of hours and cycles (flights). Labels and placement within the warehouse vary based upon its status of recertification and airworthiness. This landing gear above, as denoted by the green tag, is ready to go as soon as it's needed.

Unsurprisingly, the most valuable assets are the ones that move frequently, like wheels, control surfaces, cockpit equipment, engine thrust reversers and different parts of the wing.

Airlines from all over use UAM for parts. And the facility’s proximity to Memphis, the global Fedex hub, means they can send parts anywhere in the world, even overnight in some cases.

If you're interested in snagging some for yourself, there's a “novelty distribution” side of the business, where, for a price, we aviation nuts can take some other parts home. Anyone want some polished aluminum windows or American flags? Is there an aircraft that you have a special memory on? Maybe you can buy the registration number from the fuselage!

After finishing up in the warehouse, it was time to head back to check out the United Queens, before a champagne toast and dinner.

A First Class Toast and Dinner

Before heading outside to take a look, Wright, Garcia and the UAM team gave us a brief history lesson about the 747s. More specifically, that these aircraft were originally designed by hand in the 1960s (engineers were using slide rules, not 3D modeling software).

Garcia told us they'd waited longer than usual to take these planes apart so we could check them out. In the first 24 hours within arriving at UAM, 747s are stripped of their four engines, as the Jumbos here show.

The rest of the airframe can be disassembled entirely in three to four weeks.

The only pieces of the engines left on these 747 are the thrust reversers. Mechanics at UAM extend the wing flaps fully, so they can access any part of them. Once they remove the aircraft battery, there's no turning back — no parts can move. They then pump out and recycle all fluids and fuel.

We got very up close and personal.

The scale of these airplanes is a bit hard to grasp watching from an airport window, or even while onboard. When you can get on the ground right next to them, the sheer size is remarkable.

Someone got to pop their head into an electronics bay typically filled with server racks housing sophisticated computers.

Then, we boarded the the aircraft, the same one that made the final trip to Honolulu, to celebrate with a champagne toast in the first class cabin.

Passengers found the seats they sat in on that final service. I sat in Zach’s seat, 1A.

With some of the doors already removed, we got some pretty unique window views.

Of course, I had to head upstairs to the flight deck and play around. And play I did. With no engines, there was no risk that advancing the throttles in my right hand would do anything surprising. Note that the autopilot panel, in the center of the dashboard, had already been removed.

It was hot onboard with no power to the aircraft. I went back outside and snapped more photos, and chatted up more with other attendees, several of whom are avid TPG readers.

Dinner was to be served in between three of these giant birds. Not a bad setup.

But before that, with the sun setting, the 747s really started to glow in the light.

We even got a chance to sign a piece of this aircraft.

Attendees are going to receive a cut-up section where their signature is; I can't wait to receive mine!

Then, dinner was served.

There was even a quick raffle for two models of a United 777-300ER! Sadly, I did not win. As the event came to a close, we got a few more shots of the Queen at night. This isn't a setting I'll have for dinner again anytime soon again.

Quite the stunner, even in her old age. (19 years, in fact — not that old for an airplane.)

I'd always thought it seemed to be a waste to let airplanes sit in the desert or elsewhere, but now I know that old planes don't really die — thanks to companies like UAM, and the airlines that work with them, these marvels of engineering and ingenuity live on, in other airplanes. I can only hope that other airlines follow United's example in letting their most dedicated customers look behind the scenes like this.