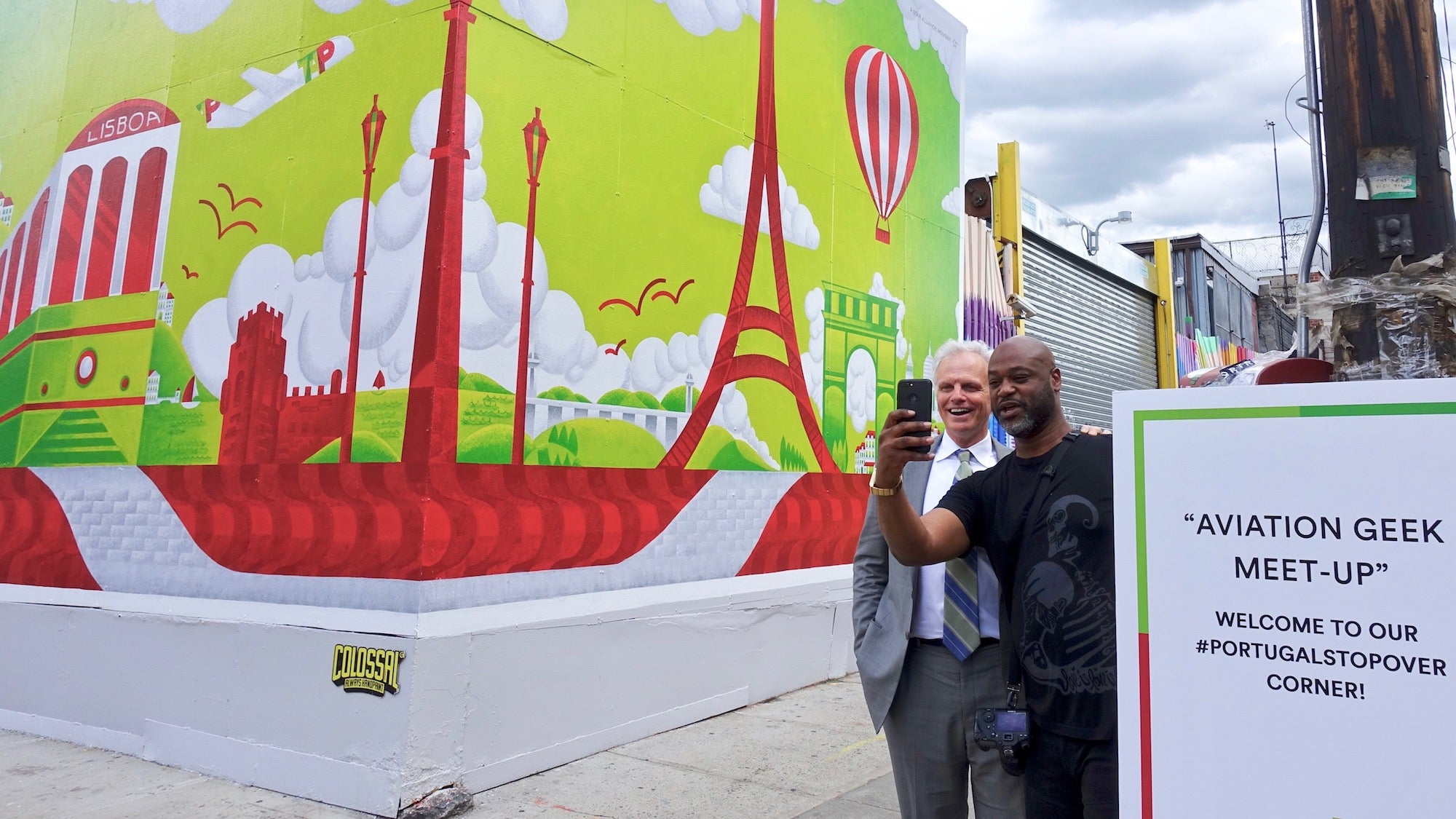 It's not too common for airlines to host events where the public gets to meet its executives, let alone owners. However, Portuguese flag carrier TAP Air Portugal did just that on Friday so naturally, we shared the invite with our readers and also went ourselves.

To mark its 50th anniversary at New York’s JFK airport, the airline hosted a public “Aviation Geek Meet-Up” with David Neeleman, an airline legend and now co-owner of TAP Portugal. The event wasn't hosted at either of the New York area airports the airline serves, but rather an intersection in Brooklyn decorated with a festive mural that the airline is calling its "Stopover Corner" (an homage to the airline's stopover program). You can see the mural on display at the corner of Bogart and Grattan Streets for the next two months.

Attendees were greeted with tasty Portuguese custard tarts and the latest issue of UP, the airline's in-flight magazine,...

...and had the opportunity to win round-trip tickets to Portugal by taking selfies in front of the mural and sharing them on social media.

As tasty as the pastries were, and as insta-worthy as the selfies turned out, the highlight of the event for airline enthusiasts was the opportunity to meet David Neeleman. Besides being a major investor in TAP Portugal, Neeleman founded Morris Air (acquired by Southwest in 1988), WestJet, JetBlue and most recently, Azul Brazilian Airlines.

Between Neeleman’s lifelong history with airlines and word of TAP Portugal launching flights to the San Francisco, we had a lot of questions to ask since our last interview with him in May.

The only US destinations TAP Portugal serves now are Boston (BOS), Miami (MIA), Newark (EWR) and New York (JFK). Neeleman blamed a lack of planes for slowing TAP Portugal's growth, but expects some expansion in the airline's route network once it starts taking delivery of its 10 new Airbus A330-900neo aircraft.

It's long been hinted, and recently revealed by Portuguese Prime Minister António Costa, that the carrier would launch non-stop flights between Lisbon (LIS) and San Francisco (SFO) once the new aircraft arrive. While Neeleman said, "obviously we've got some work to do before we can make an official announcement," he smiled when asked about it and said that San Francisco is near the top of the airline's list of destinations because of factors like the city's "tech connection." "We're big on tech in Portugal. Also, there's a large Portuguese community in San Francisco," he explained.

Neeleman added that he's offered the new service as a part of the carrier's contract with Web Summit, a technology conference with more than 60,000 attendees held every November in Lisbon. "We can even start it by the time they do the Web Summit next year," he said. Other destinations the airline is considering include Los Angeles (LAX) and Houston (IAH), with no plans for expanding into Asia.

But, not all of the new planes will be used for growth — they'll primarily be used to replace older ones being retired. The airline plans to deploy the first A330neo it receives on its New York route, starting in September or October.

Neeleman has always put much value towards passenger comfort and experience at the airlines he's been involved with. For instance, JetBlue proudly offers the most legroom in coach — and he hopes to continue that at TAP Portugal.

That said, we shouldn't expect any major changes onboard as he is pretty content with what's being offered now: Long-haul business class passengers have lie-flat seats, and in economy, "the food's good, the entertainment's there and you got legroom," Neeleman says. The amenity he sees as most important right now is in-flight Wi-Fi, followed by USB charging ports in economy (business class seats already offer AC power outlets and USB ports) — and both of those features are being rolled out in refurbished and new planes.

Although TAP Portugal is one of the only major carriers in Europe left without a true premium economy product (it does offer an extra legroom economy class product), it surprisingly doesn't have any plans to introduce one. Instead, the carrier is putting a greater focus on disrupting its market by selling business class fares for less than its competitors — much like JetBlue does with Mint.

Another way the airline wants to differentiate itself is through its stopover program — after all, that was what the meet-up revolved around. Basically, the program allows medium and long-haul passengers to stay in Portugal for up to five days en route to their final destination at no additional airfare cost. Neeleman suggested it's the only stopover program of its kind in Europe, "unless you want to go to Iceland," though Finnair and Turkish Airlines both offer similar stopover programs as well.

In April, American Airlines CEO Doug Parker announced that rising fuel costs will drive up airfares. While Neeleman agreed that rising fuel prices are costing the airline industry a lot and admitted that there isn't as much fuel hedging with TAP Portugal as he'd like, he also believes, "Airline fares are completely dependent on passenger demand. It has nothing to do with price of fuel. If there's enough demand to raise the fares, then airlines will raise their fares. If there isn't, then they lower fares."

Strong transatlantic competition from emerging low cost carriers like LEVEL and Norwegian has driven full-service carriers, like TAP Portugal, to drop their airfare, but Neeleman doesn't view it as a long-term threat to his airline. "Norwegian has proven that what they're doing is not sustainable, they haven't been profitable," he explained.

With the entrepreneurial record Neeleman has, it was most appropriate to close the conversation by asking: "What's next?"

While Neeleman didn't have any immediate projects to tell us about, he did say that he sees a ton of opportunity in the US market. At the same time, he mentioned that there would be a lot of challenges with starting a new airline in the US today, including fierce competition from "the big guys" and the pilot shortage. Neeleman is also frustrated by the lack of air traffic privatization.

All images by the author except where indicated.