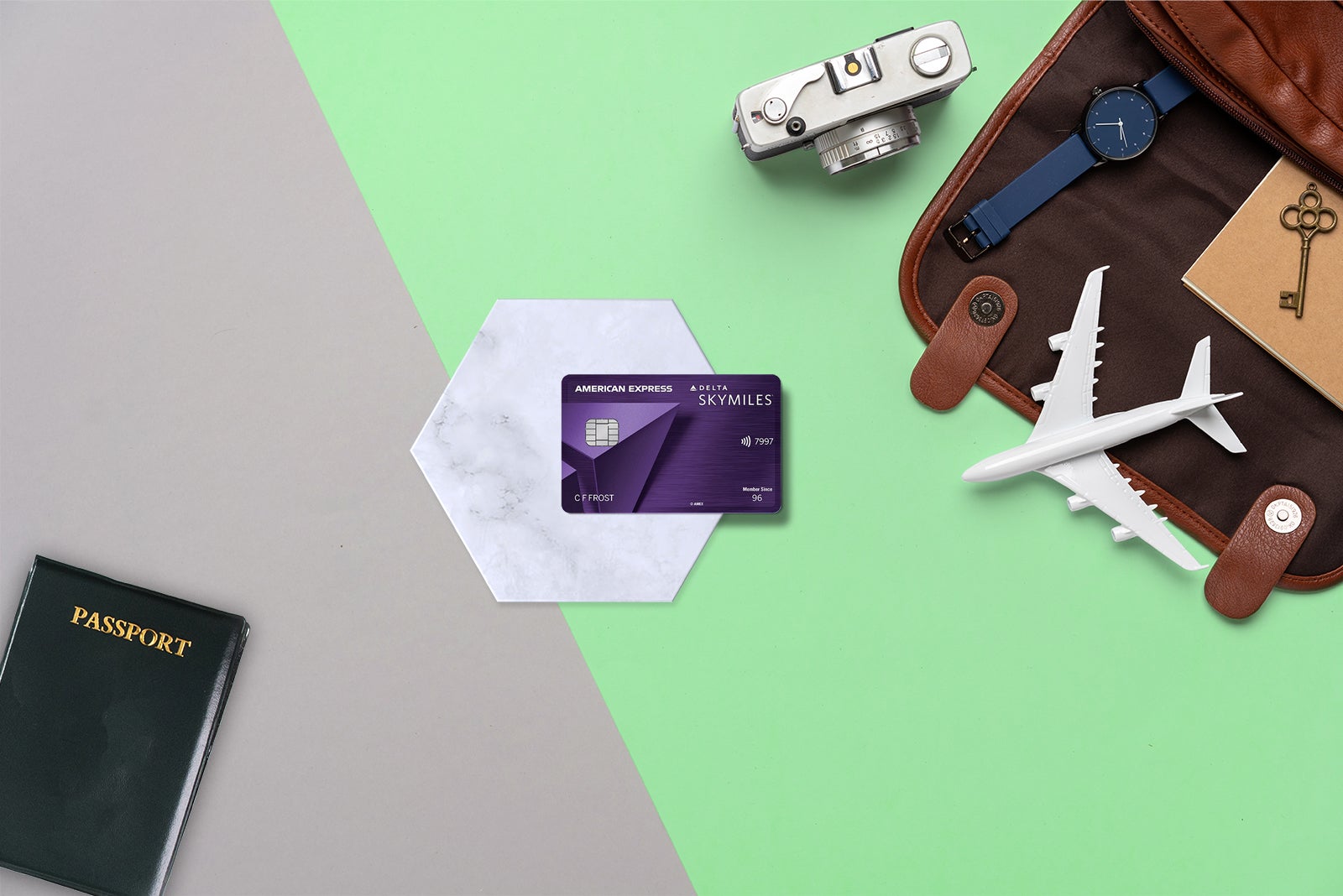 It’s an exciting time to apply for an airline credit card. Not only are there more and better choices than ever, but also historically high introductory bonuses on cards from Southwest and United. Not to be outdone, long-time partners Delta and American Express recently announced major overhauls to their portfolio of credit cards, including all-new perks and some eye-popping welcome offers of up to 100,000 bonus miles.

Below is a quick look at how the two cards compare. Take a look at the chart and then read on for analysis of their relative benefits.

Let’s get into the details.

Both cards now offer some of the highest introductory bonuses we have ever seen on these products.

As a quick comparison, both the Delta SkyMiles® Platinum American Express Card and the Delta SkyMiles® Platinum Business American Express Card are also offering welcome packages of 100,000 bonus Delta SkyMiles. You earn 80,000 after spending $3,000 on purchases using your card in the first three months of account opening, and an additional 20,000 bonus miles after your first anniversary. So the spending requirement is lower, but there are no MQMs to be had, so the Reserve versions are better for higher-spending folks seeking Medallion status.

All of these offers are available through April 1, 2020.

Another major change is in the card's earning structure. The Delta SkyMiles® Reserve American Express Card now earns 3x miles on Delta purchases, instead of the previous 2x rate. Unfortunately, it offers no other bonus categories, but if you’re a frequent Delta flyer and spend a lot on the airline – including tickets, upgrades and seat assignments – you could be raking in the miles.

The Delta SkyMiles® Reserve Business American Express Card features a potentially even more lucrative earning formula. Like the personal version, it accrues 3x miles on Delta purchases. However, once you make $150,000 or more in purchases on your card in a calendar year, you start earning 1.5x miles per dollar. So if you have a large cash outlay each year on business purchases, this card’s earning structure could shoot you through the stratosphere.

For comparison’s sake, the United Club Card and United Club Business Card both only earn 2x miles per dollar on United purchases, but 1.5x on everything else with no minimum spending requirement, so the Business Reserve might not turn out to be as great a deal as it looked from the start.

The information for the United Club Card and United Business Club Card has been collected independently by The Points Guy. The card details on this page have not been reviewed or provided by the card issuer.

Because the cards are geared toward frequent and premium Delta flyers, you can expect both cards to offer members a comprehensive package of benefits when traveling with the airline.

Like Delta’s other cardholders, those with either Reserve card enjoy a free checked bag and priority boarding, along with up to eight companions on the same reservation, even when traveling in basic economy. Folks with either version can also take advantage of 20% statement-credit refunds on inflight purchases of food, beverages and audio headsets, but not Wi-Fi.

Among the cards’ more interesting Delta-specific benefits are a shot at complimentary upgrades for non-Medallion members. Their most extraordinary benefit, however, is the chance to earn a jaw-dropping number of MQMs simply through spending. Those with either the Delta SkyMiles® Reserve American Express Card or the Delta SkyMiles® Reserve Business American Express Card earn 15,000 MQMs after spending $30,000 on purchases with their card in a calendar year. They get an additional 15,000 MQMs at $60,000, $90,000 and $120,000 (potentially a total of 60,000 MQMs). That’s more than enough for Gold Medallion status without even setting foot on a plane. The downside is that cardholders no longer receive bonus SkyMiles for hitting these thresholds, as they did before the card changes went into effect in January 2020.

These cards also include spending-based waivers for the airline’s MQM requirements. Instead of having to spend a certain amount on airfare, cardholders can waive the requirements for Silver, Gold and Platinum by hitting $25,000 in purchases in a calendar year, and a whopping $250,000 for top-tier Diamond status.

Finally, the two cards offer one of the best airline credit card companion-ticket benefits out there. Each year upon renewal, cardholders receive a companion certificate good for one round-trip itinerary within the 48 contiguous United States (or from Alaska, Hawaii, Puerto Rico, or the U.S. Virgin Islands for members who live in those places) in Main Cabin, Delta Comfort+, or first class (in fare classes L, U, T, X, V, I or Z). They just have to pay taxes and fees on the second ticket, up to $75. Both passengers are also eligible for Medallion upgrades, though only the primary passenger earns SkyMiles and MQMs.

Aside from Delta-specific perks, the two cards now also include a few other travel benefits. The most exciting is that cardholders can get a refund for either a Global Entry application (once every four years) or TSA PreCheck application (once every 4.5 years) worth up to $100, bringing it into line with other premium cards such as the Chase Sapphire Reserve and The Platinum Card® from American Express.

Both cards waive foreign transaction fees. They are also two of the Amex cards that now offer trip delay insurance, which starts at six hours and is capped at $500 per claim up to two times per 12-month period. Both cover lost luggage up to $1,250 for carry-ons and $500 for checked bags, offer secondary car rental insurance, and extend purchase protection 90 days out on up to $10,000 per claim and $50,000 per calendar year. They will also extend warranties of under five years for up to one additional year.

Finally, the personal card will get you a complimentary ShopRunner membership, with two-day shipping from hundreds of online merchants.

Although you might be inclined to simply apply for the personal version, you could also be eligible for the business one, and there are a lot of great reasons why you might want a business credit card instead of a personal one.

First, it’s a way to keep your business and personal expenses separate. Doing so might help improve your personal credit score over time by lessening the debt-to-credit utilization ratio on your personal report. Business accounts generally do not count toward credit card issuers’ restrictions on the number of cards you can apply for or carry, either, so it could be a way to get around Chase’s obscure 5/24 rule or Bank of America’s limitations. Plus, if you’ve had the personal version in the past, you might be ineligible for its welcome offer, whereas you’d still be able to score the one available on the business card.

If you’re not ready to commit to Delta in such a big way, consider the Delta SkyMiles® Platinum American Express Card and the Delta SkyMiles® Platinum Business American Express Card instead. Both charge $250 a year (see Delta Platinum consumer rates and fees) (see Delta Platinum Business rates and fees), respectively, instead of the Reserve and Reserve Business versions’ $550, respectively. Through April 1, 2020, both Platinum cards are also extending welcome offers of up to 100,000 bonus miles: 80,000 after spending $3,000 on purchases using your card in the first three months of account opening, and an additional 20,000 bonus miles after your first anniversary.

Platinum cardholders can enjoy many of the same day-of-travel benefits on Delta as Reserve cardholders, such as free checked bags and priority boarding, purchase $39 one-time Delta Sky Club passes, and earn up to 20,000 MQMs by spending $50,000 in a calendar year. Plus, they get an annual companion certificate good for coach (but not premium seats) travel.

Related reading: Why the Amex Platinum might just be the best card for Delta flyers

After a major overhaul, the Delta SkyMiles® Reserve American Express Card and the Delta SkyMiles® Reserve Business American Express Card both boast exciting new benefits like expanded lounge access and elite-status boosts, Global Entry/TSA PreCheck fee refunds and ongoing perks like companion tickets and day-of-travel add-ons. Before applying, make sure you can meet the minimum spending requirements, take advantage of spending-based benefits like bonus points and MQMs, and use the lounge-access benefits enough to justify paying $550 each year for the Reserve and Reserve Business cards (see rates and fees) (see rates and fees), respectively.

Related stories
17 ways to earn lots of Marriott Bonvoy points
Delta SkyMiles Gold Amex card review: Perfect for casual Delta travelers, now with a 65,000-mile offer
Fast-growing Viking doubles down on adventure cruising with a second expedition cruise ship
Quick Points: These award tickets are best to book at the last minute
Featured image by WYATT SMITH/THE POINTS GUY
Editorial disclaimer: Opinions expressed here are the author’s alone, not those of any bank, credit card issuer, airline or hotel chain, and have not been reviewed, approved or otherwise endorsed by any of these entities.