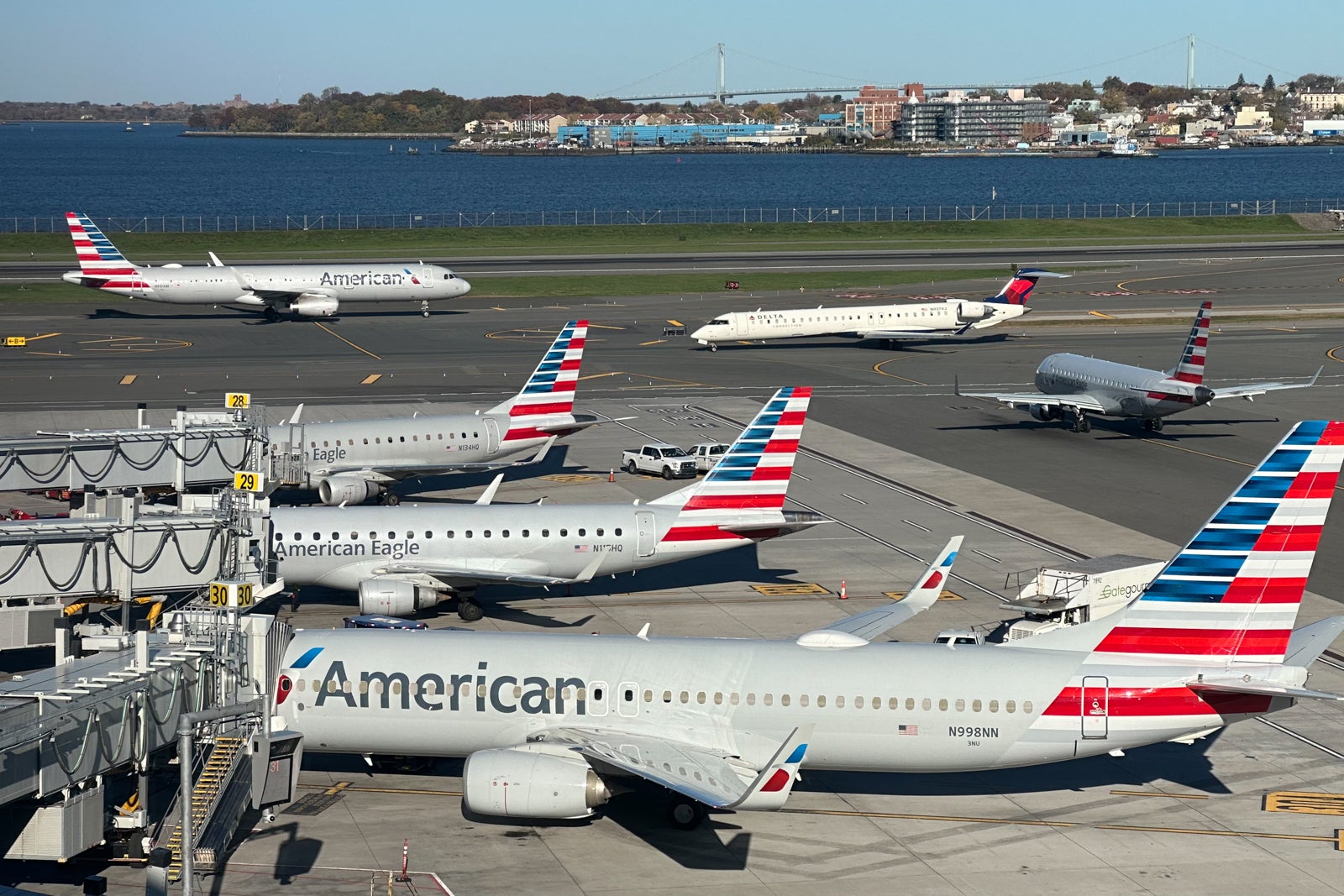 Just nine months after American introduced a massive overhaul of its AAdvantage program, the airline is back again with another round of updates.

This time, American is introducing a new rewards structure, called Loyalty Point Rewards, which adds additional tiers for earning rewards and expands the selection of benefits available at current thresholds.

The Fort Worth-based carrier is also tweaking elite thresholds, how you earn miles on the cheapest tickets and much more.

Since 2021, American has offered elites a menu of benefits to choose from when they unlock status.

Those so-called Elite Choice Rewards got a major overhaul last year with the introduction of Loyalty Choice Rewards, and now the program is getting perhaps its biggest upgrade yet with the unveiling of Loyalty Point Rewards.

Beginning on March 1, 2023, American is adding 11 additional tiers of rewards for a total of 15 Loyalty Point thresholds that each unlock additional benefits and perks. This move means that travelers will receive perks before, during and after earning elite status.

Plus, American is adding new benefit options from which to choose — see the full list below.

Unlock Group 5 boarding for the membership year, and you may choose one of the following:

Unlock Avis Preferred Plus status and receive a 20% Loyalty Point bonus on spending with the following partners:

You can choose two of the following:

As you can see, there are a ton of benefits that you can rack up on your Loyalty Points journey. As before, you'll have between March 1 and Feb. 28 (or Feb. 29, if it's a leap year) of the following year to accrue the required number of Loyalty Points for each threshold.

Then, you'll have until March 30 of the following year to select your reward from the Wallet section of your AAdvantage account.

Perhaps the biggest change is that Platinum Pro members will now need to earn 175,000 Loyalty Points (up from 125,000) to earn a pick from the enhanced perk menu.

Another big change is that American is removing the 30-segment requirement for Loyalty Point Rewards. Last year, American shared that it wanted travelers to actually fly with the airline to earn perks, and now the thinking has seemingly evolved.

AAdvantage is now "a travel rewards program that is rewarding customers wherever they are with us," said Heather Samp, managing director of AAdvantage, in an interview with TPG.

"So whether that be on the aircraft or in their everyday spend on their credit card or staying with our hotel or using our car rental partners or using our eShopping platforms, there are multiple ways for members to go about unlocking Loyalty Point Rewards," Samp added.

In fact, American's revamped benefit thresholds and menu largely mirror much of the thinking that went into JetBlue's new "Perks You Pick" offering that was unveiled last week.

Traditionally, the benefits of airline loyalty don't begin until you cross a status threshold. Until then, general members don't usually enjoy any special perks. But, JetBlue, and now American, are rethinking the status quo, giving rewards even for casual travelers who engage with their loyalty programs.

Note that American isn't making any changes to systemwide upgrades as part of this announcement, Samp told TPG.

Earlier this year, American unveiled Loyalty Points, a brand-new currency that tracks your progress to elite status and travel benefits. Loyalty Points are accrued for transacting with American and many of its air and non-air partners, including from spend on cobranded credit cards.

While Loyalty Points are here to stay, the airline is changing the threshold required to earn entry-level status. For 2024 and beyond, you'll need to earn the following number of Loyalty Points:

You'll need to accrue the required number of Loyalty Points between March 1 and Feb. 28 (or Feb. 29, if it's a leap year) of the following year to qualify for status.

American's updated status requirements represent a 33% increase in the number of Loyalty Points required for Gold status, which was earned at 30,000 Loyalty Points previously. No other changes are being made at this time.

Perhaps most interestingly, American's two biggest U.S. competitors, Delta and United, unveiled significant increases in status thresholds in recent weeks. These changes primarily affect those vying for top-tier status; for example, United's Premier 1K will require up to $24,000 in annual spending with the airline.

Meanwhile, American is doing the opposite. The airline is only raising the requirement for Gold status, while keeping all other thresholds intact.

"Yes, United and Delta are our competitors, but we are setting our own course and we feel confident in the levels that we have and the ability to continue to provide value to our customers that are choosing to have a relationship with us," said Samp.

"Loyalty is a two-way street. We want to make sure that we are rewarding customers that are engaging with us," Samp added.

Basic economy is American's lowest-priced main cabin fare. These deep-discount fares were originally designed to better compete with ultra-low-cost carriers, and as such, American (and its competitors) stripped out many of the inclusions you'd typically find in an economy ticket for those purchasing the cheapest fares.

Going forward, these fares will come with another restriction: fewer miles and Loyalty Points earned.

American will round up to the next integer value whenever the total number of miles awarded is a fractional number.

This year, basic economy tickets have earned miles and Loyalty Points just like any other economy or premium-cabin fare.

This move will definitely sting for those who purchase these deep-discount tickets, and it'll further segment products and provide additional upsell opportunities for American.

Even with the reduced mileage earn, American's basic economy offering isn't as punitive as it once was. During the pandemic, American began allowing travelers to purchase many ancillaries on these fares, including:

While rumors have been swirling around American re-adding basic economy restrictions, that's not happening right now. You'll continue to be able to bring a full-size carry-on bag and enjoy all the aforementioned benefits on these tickets, Samp confirmed to TPG.

Regarding the rumors about broader changes, Samp said that "was all technology that had to be cleaned up and is not anything related to what we're talking about today."

When American, Delta and United switched to revenue-based mileage earnings, they all added a 75,000-mile cap for the maximum number of miles awarded per ticket.

Earlier this year, Delta permanently eliminated the cap, and now American is doing the same.

While Delta retroactively granted more miles for those who hit the cap in 2022, American is not being as generous. The cap no longer applies for flights flown on or after March 1, 2023.

United is now the only major U.S. airline with a limit on the number of miles you can earn from a ticket. I'd imagine competitive pressure will push United to acquiesce and remove the cap.

American is working hard to add more ways for members to redeem miles.

American didn't publish the redemption rate for these non-air bookings, but we'll be sure to follow up with the details once these redemptions go live. If historical data points are any indication, these mileage bookings won't offer nearly as much value as those for flights.

In recent years, the major U.S. airlines have turned miles into a currency that can be used across the travel journey.

While flyers may have historically saved miles specifically for flights, they can now be used across much of the travel journey. With American, this includes redemptions for extra-legroom seats, Five Star Service bookings, Admirals Club access and now vacation packages and cardmember-exclusive experiences.

Just under a year into the revamped AAdvantage program, American is making some major changes to status perks and the loyalty program experience.

American is going from five to 15 levels of benefits, and the airline is expanding the menu of choices you'll receive after crossing each threshold. You'll also no longer need to fly 30 segments with American and its partners to unlock these rewards.

However, the news isn't all positive. American is raising the requirements for earning Gold status, reducing the number of miles you'll earn from basic economy tickets and — perhaps most ominously — revamping its award charts.

That last point is perhaps the one with the widest appeal, so be sure to check out TPG's dedicated story for all the details.