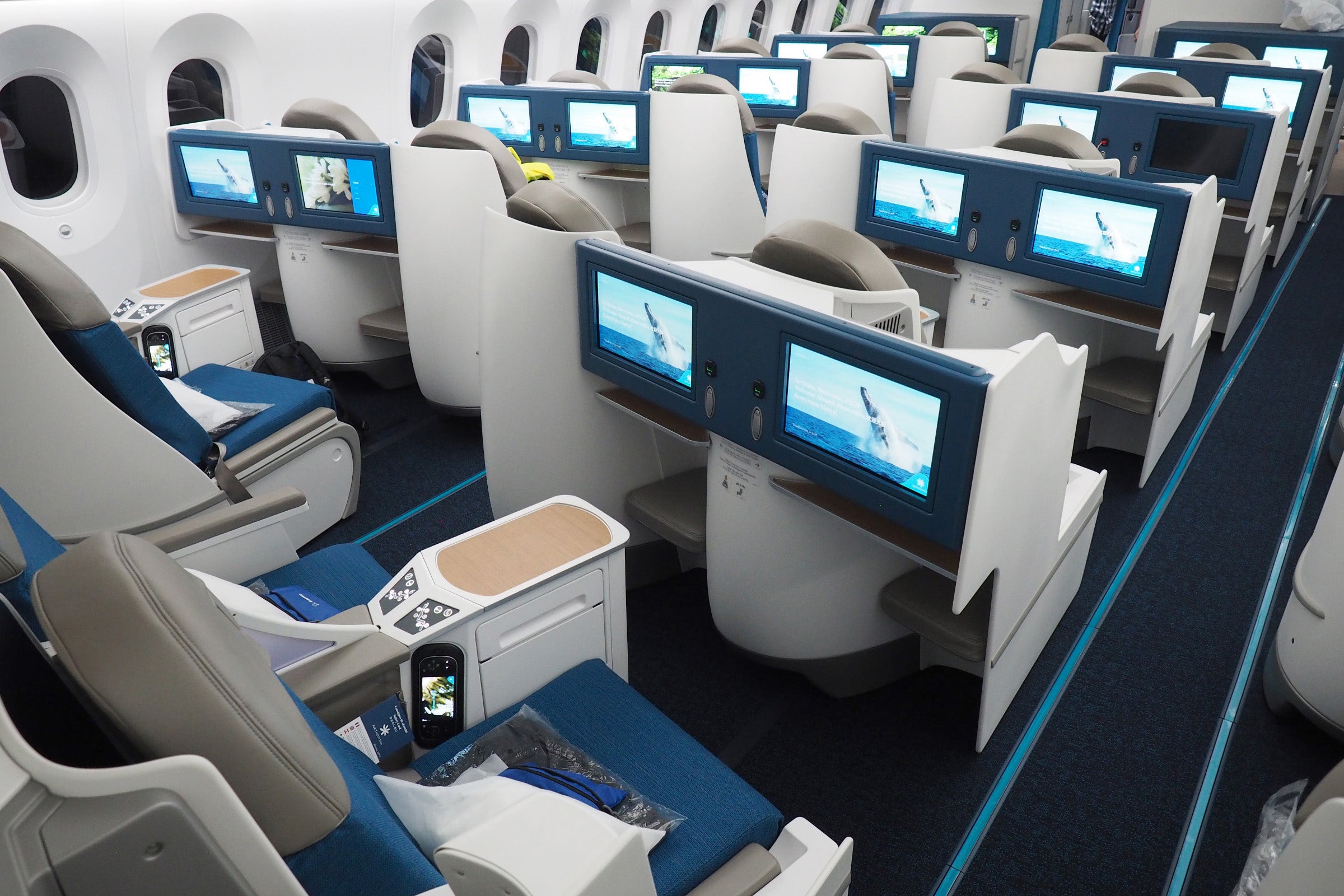 On Tuesday, Air Tahiti Nui took the next major step toward overhauling its fleet, beginning with F-OMUA, the carrier's very first Boeing 787-9.

The Dreamliner made its way from Boeing's delivery center in Charleston, South Carolina (CHS) to Los Angeles (LAX) via Oklahoma City (OKC).

Later this week it'll fly to the airline's hub in Papeete (PPT), ahead of an official customer launch at the beginning of November.

Air Tahiti Nui's 787-9 seats a total of 294 passengers — exactly the same number as the airline's aging A340-300s. The Dreamliner has more premium seats, though, with 30 lie-flat seats in business class and 32 in premium economy.

Most of the seats are in coach, with a total of 232 spread between two large cabins, with one positioned over the wings and the second at the back of the plane.

While many carriers have moved to a more private 1-2-1 configuration in business class, Air Tahiti's opted to maintain the 2-2-2 arrangement from its A340s. There's a very good reason to add paired seats, however — nearly all of the airline's premium travelers are couples, making 2-2-2 a more appealing choice.

Look familiar? These Rockwell Collins Diamond seats are the same model you'll find on United's 787-8 and 787-9 Dreamliners, along with a handful of the carrier's other planes, including some 757s, 767s and 777s. A version of the seat is also flying on American and Delta's premium domestic routes.

This isn't an "aspirational" product — that is to say most points and miles addicts won't be rushing out to redeem for Air Tahiti Nui's new biz just for the seat itself. But stays on Tahiti or Bora Bora, just a short inter-island flight away, are among the most sought-after redemptions in the biz — flyers still want to be comfortable en-route to French Polynesia, but PPT is the destination, not the flight itself.

And Air Tahiti Nui's seats are comfortable — especially in bed mode, and if you're flying with a friend or partner, since they don't offer a ton of privacy.

They're entirely functional, too, with decent storage and a large 16-inch HD display, offering a selection of new release films, TV shows, Polynesian content and an interactive moving map. There's also a universal power port and two USB charging ports at each seat.

The footwell's a bit narrow at the non-bulkhead rows, so grab a seat up front if you're especially tall, or want a wider platform for your feet.

Business-class passengers receive a large pillow, comforter and an amenity kit, in addition to multi-course meals.

Air Tahiti Nui's 787 is the airline's first plane to offer a premium-economy cabin, with a total of 32 seats arranged in a 2-3-2 configuration.

The airline opted for an industry-standard seat — it's very similar to the versions you'll find installed on American, Delta and United's long-haul planes, for example.

Seats offer a width of 20.4 inches with at least 38 inches of pitch.

Bulkhead seats have far more legroom, plus a slide-out footrest, though you're also much farther away from the 13-inch touchscreen display.

I noticed one peculiarity, though — non-bulkhead seats have a slide up leg rest as well, but there isn't any room for your feet when it's extended, so all but the airline's smallest customers won't be able to take full advantage.

All economy seats are arranged in a Dreamliner-standard 3-3-3 configuration, with the exception of two sets of paired seats at the far back of the cabin, in rows 45 and 46.

Passengers have access to a large touchscreen inflight entertainment system, each with a USB charging port.

There's at least 31 inches of pitch throughout both cabins, with loads more legroom at bulkhead and exit-row seats.

There's a two-panel fold-out tray table available as well, with a fold-out cupholder below the 12-inch display.

Air Tahiti Nui's added a Panasonic satellite internet system, which offered decent performance on our delivery flight, even though I wasn't able to load Instagram or a speed test app. Pricing is steep, at $9 for 10MB, $15 for 20MB, $29 for 50MB and a whopping $49 for 200MB.

How to Fly Air Tahiti's Dreamliner

Air Tahiti Nui has a total of four Dreamliners on the way, with all expected to enter the fleet by the end of 2019. The 787-9 will launch first on the airline’s flight from PPT to Auckland on Nov. 7. It will begin flying to Los Angeles the next day, on Nov. 8, after its return leg from AKL.

From there, the plane is scheduled to begin operating some flights from LAX to Paris (CDG) in March 2019, and from PPT to Tokyo (NRT) in June 2019, though some frequencies may continue to be flown by the A340 until all of the airline’s 787s enter the fleet.

The plane couldn't have come at a better time, too — United Airlines and low-cost-carrier French Bee are launching nonstop service to PPT from San Francisco (SFO), with a Boeing 787-8 and Airbus A350, respectively. While French Bee doesn't offer a business-class product, United's Dreamliner does — now, with the same lie-flat seat, Air Tahiti Nui's ready to compete on flights to PPT.

Featured image by Don't select seats in row 4 if having a window view is important to you. (Photo by Zach Honig/TPG)