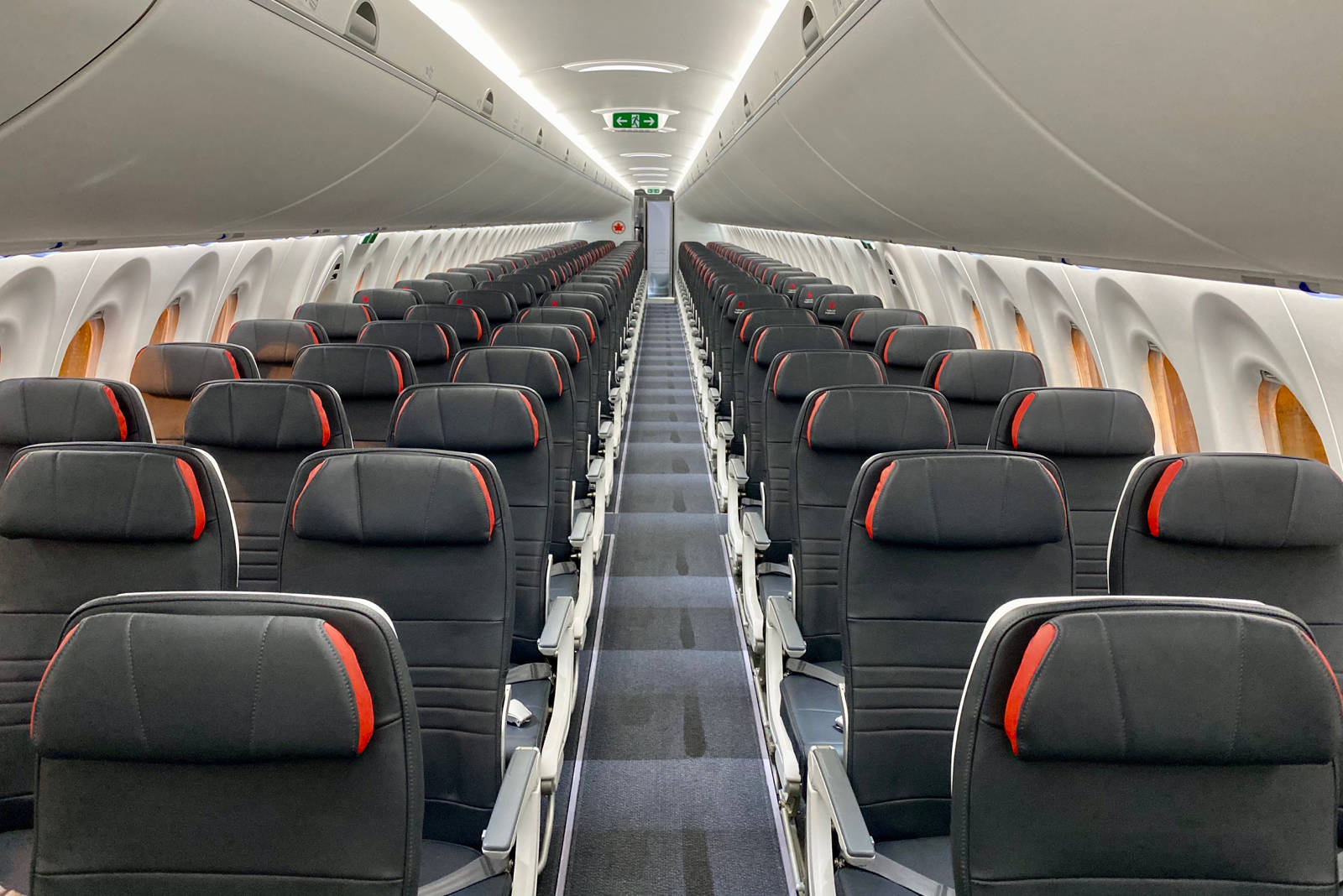 The Airbus A220 is one of the most passenger-friendly jets in the sky. Rather excitingly, there’s now a second carrier flying this new plane around North America besides Delta.

Air Canada took delivery of its first A220 a few weeks ago. After a month of testing and crew familiarization flights, the airline debuted the plane at a media event in a hangar in Montreal on Wednesday. And just one day later, Air Canada launched commercial service with the A220.

What follows is my experience onboard the inaugural flight from Montreal (YUL) to Calgary (YYC) on Thursday.

It was a big deal for Canada. This was the first scheduled flight of the flagship Canadian-made airliner with the Canadian flag carrier.

With a departure scheduled for 8:10 a.m., you might not have expected such a cheery and energetic crowd. However, festivities were well underway when I got to Gate A11 about 90 minutes before boarding.

The inauguration ceremony began with short speeches by two executives who were very proud of the fact that the A220 was built just a few miles away in Mirabel. There was then a short photo shoot followed by a ceremonial ribbon cutting. (Before being renamed the Airbus A220 when the European company bought the program in 2018, the airplane was known as the Bombardier C-Series.)

At the conclusion, passengers were invited to partake in some themed cupcakes and soft drinks. Once everyone was satiated, it was time to get going. Boarding started on time (with some goodies), and it wasn’t long before I heard the oohs and aahs of passengers marveling at the new plane. Air Canada flies the longer A220-300 variant; Delta chose the shorter A220-100, but has a bunch of -300s on order.

I couldn’t imagine a better setting for an Air Canada inaugural than amid a snowstorm. But that meant the plane needed to be de-iced, which took quite some time. We were airborne an hour behind schedule, sans water-cannon salute.

The seats are quite comfortable and recline about four inches. Since the A220 will be flying some of the carrier’s longest domestic and U.S. routes, you’ll really appreciate that these seats have a legrest and footrest.

There’s a small storage area located in the center armrest between seats. If you need more space, you’ll find another exposed storage area above the seatback pocket.

The tray table pops out from the armrest and measures 18 inches wide and 10.5 inches long, which was plenty large for my 13-inch computer.

One of the best things about the A220 is the oversized overhead bins. The inaugural flight was completely full, yet no one was required to gate check their bag.

The economy cabin is quite comfortable as well, even though its outfitted with slimline seats.

The 125 seats are spread across 25 rows in a 2-3 layout. One of the best features of the A220 is the fact that it only has one middle seat per row.

Measuring 19 inches wide, these are the widest economy seats in Air Canada’s fleet. Though an extra inch or two may not seem noticeable, I definitely felt a difference, especially around my shoulders.

Each seat offers about two and a half inches of recline.

Unfortunately, the armrests are incredibly narrow, and the ones on the aisle and window can’t be raised or lowered.

The seatback pocket is the only storage space for these seats. I wish that Air Canada had installed more pockets or a tablet holder, like JetBlue did with the new Airbus A321neo.

The tray table measures 17 inches wide and 7.5 inches long. Though on the small side, it slides along its track for easy egress during flight.

As an AvGeek, my favorite feature of the A220 is the large windows. At 15 inches long and 10 inches wide, there’s just so much room to capture the perfect Wingview Wednesday shot.

Overall, I thought the cabin was beautifully designed in understated tones. Biz class was really comfortable, and I particularly liked the legrest and footrest. And economy was about as good as economy gets.

Best seats on the Air Canada A220

Not all seats on this A220 are created equal.

If you’re flying in business class, I’d definitely recommend choosing a seat in row 2 or 3, since the bulkhead row doesn’t have a footrest.

If you’re flying in economy, you should definitely select one of the A- or B-lettered coupled seats.

Regular economy seats have about 30 inches of pitch, which is on the tighter end, although what the slimline seats may take away in padding they give back in legroom, thanks to the narrow backs.

If you need more space, bulkhead Row 12 and Rows 19-21 are designated as Preferred seating. These have 34 inches of pitch, and about five more extra inches of legroom.

The exit row has a whopping 37 inches of legroom, but note that the window is much smaller than the rest of the cabin.

I’d personally also avoid the bulkhead, since there’s no underseat storage and the armrests are immovable.

Aside from the massive windows, the A220 is packed with top-notch amenities.

All seats feature a winged headrest which helped keep my neck in place when trying to sleep.

There are three average-sized lavatories on the plane. The one up front is reserved for those flying in business.

Each biz seat has a universal AC power outlet, but — contrary to the airline’s press release — the outlets are shared in economy. There’s one for the couple seats and two for the three seats on the other side.

If you need more juice, there’s a standard USB port and a USB-C port at every seat.

As an unapologetic techie, I loved that Air Canada installed USB-C rapid charging on this plane. With Apple and other companies migrating to this new adapter, passengers won’t need to carry a dongle to charge their devices.

Every seat is equipped with an HD personal entertainment system loaded with over 1,000 hours of movies and TV shows. Those up front measure 13 inches, while the economy ones are 10 inches.

I was very impressed with the software installed on the IFE system. The touchscreen and animations moved very smoothly, and there was a wealth of information on the screens, including weather, inflight menu and flight connection information.

The system also has some nifty features like night mode that changes the display to warmer colors, making it easier on your eyes.

Furthermore, there’s a picture-in-picture mode which you can use to minimize your content while browsing the system.

I selected the full-flight stream package and was wowed by the 50 Mbps download speeds. The upload speeds, however, were a lot less impressive at 2 Mbps.

Though we had a departure delay, the inaugural flight quite literally flew by.

For those booked on the new plane, you’ll enjoy your flight — regardless of whether you’re sitting in biz or coach. The front cabin was particularly comfortable, especially with the added legrest and footrest. In economy, the seats were noticeably wider, plus there’s only one middle seat per row.

Aside from the seats, there’s a slew of useful inflight amenities, like a USB-C charging port, large overhead bins and high-speed Wi-Fi.

All in all, the Air Canada A220 is a joy to fly. I can’t wait until more of these sleek jets grace the North American skies.