Articles
Mike Arnot is the founder of Boarding Pass NYC, a New York-based travel brand and a marketing consultant to airlines. A private pilot, he can sometimes be found above the skies of New York City.
Follow
Jan. 30, 2022
•
9 min read 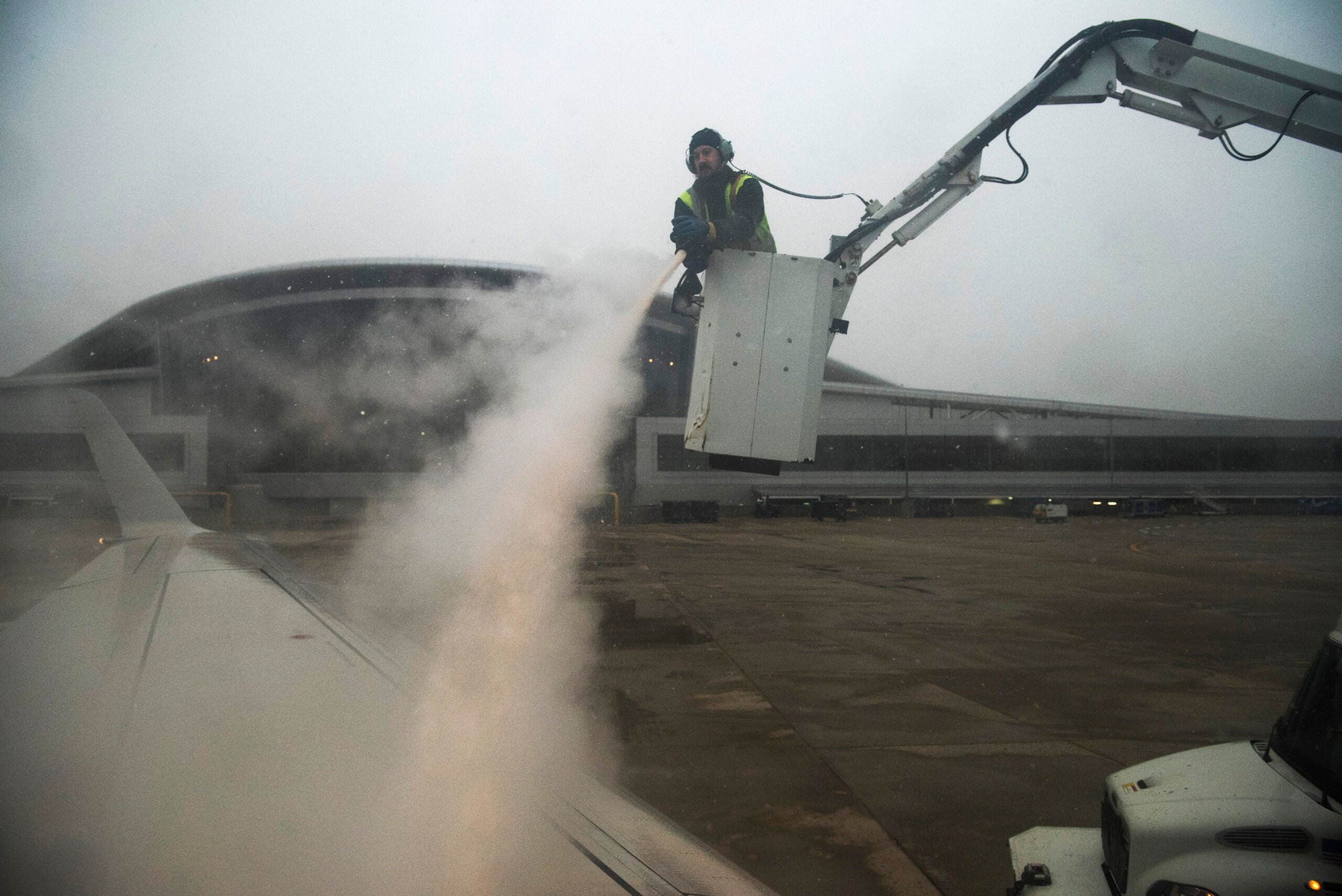 From the inside, it looks like your plane is going through a car wash, a soothing experience. The airport operations teams deploy a giant super-soaker spraying out an orange or green misty fluid. You’re inside, warm and protected from the elements. The gentle sound of de-icing fluid drips on the windows. Bonus points if it’s an early morning flight; it might lull you to sleep.

De-icing is a fact of flying for much of the U.S., nine months out of the year.

Serene as it may be for passengers, aircraft de-icing is serious business for pilots and crews. Icing is a major cause for concern for flight crews and airlines from a safety and operational perspective. Airlines take every precaution to prevent icing and other contamination before departure. If it’s not a clean aircraft, they don’t go. Back in 2018, Southwest Airlines was forced to cancel 220 flights from Chicago Midway when it ran out of de-icing fluid. That’s an expensive mistake.

Here’s what’s behind the de-icing and anti-icing as part of ground operations.

“All aeroplanes are designed to fly clean,” notes the ICAO operations manual for de-icing. Clean, that is, from extraneous materials on the fuselage and lifting surfaces. The manual explains that snow, slush or ice are safety hazards that can reduce the performance of the aircraft dramatically. Indeed, ICAO estimates that ice on the wings akin to coarse sandpaper can reduce wing lift by as much as 30% and increase drag by 40%. That would have a very serious negative impact on a takeoff roll.

To eliminate this form of contamination and prevent it from forming during precipitation, a whole army of workers are involved.

“De-icing is a detailed and choreographed process requiring a fair amount of interaction between flight crews and de-icers,” said Bill Sponsler, chief pilot for American Airlines at Chicago O’Hare International Airport (ORD), in an email.

There are two parts to the process: de-icing and anti-icing. Each is treated in turn, below.

As the name suggests, de-icing is the first step in the process of removing snow, slush or ice from the fuselage, wings and control surfaces. The fluid used is propylene glycol heated to around 140-150 degrees Fahrenheit and sprayed under pressure to blast off “contaminants.” This fluid — called Type I — is mixed with water in a combination, dependent on the conditions. The ratio is automated, with de-icing trucks equipped with sensors to measure the outside conditions and adjust the mixture accordingly. Type I fluid is quite slippery — the de-icing trucks are often covered in a thin film of Type I.

The teams usually spray at an angle of 45 degrees or less to avoid directly spraying directly down on the surface. They spray the fuselage top centerline, avoiding windows. They’ll then spray the wings and horizontal stabilizers from the leading edge to the trailing edge and wing tip to wing root. (The wings are cambered, so spraying this way allows the fluid to drain towards the middle of the wing which saves fluid). They can also alter the shape of the spray, much like holding your thumb over a garden hose to increase the pressure.

In colder weather and heavier snow or icing conditions, anti-icing is also deployed after de-icing.

“The basic function of an anti-icing fluid is to prevent frozen or freezing precipitation or expected frost adhering to the aeroplane’s cleaned or de-iced surfaces,” according to ICAO.

The fluid — called Type IV — is more viscous than Type I. This allows it to adhere to the aircraft surface for a longer period of time. Unlike Type I, it is not diluted with water.

“Think of it like a baby diaper,” said Gene Herrick, head of American Airlines’ de-icing operations at ORD. “The anti-ice chemicals absorb water and prevent the water from sticking to the wing.”

A common misconception, Herrick said, is that anti-icing fluid will help the aircraft avoid icing at cruise altitude. In fact, the majority of it will have sloughed off during the takeoff roll, with all of it gone by the time the aircraft is 700 feet to 1,000 ft above the ground.

At the gate, after pushback in the apron or at a de-icing pad

De-icing and anti-icing operations take place at the gate and after pushback, or at specially-constructed de-icing pads. Gate operations are common but not always efficient. Airlines and airport operators want to avoid having planes clogging up gates. Nevertheless, most aircraft can be completely de-iced at the gate. However, if there is ice near the forward aircraft door or the nose, de-icing takes place after pushback just prior to departure.

Many airports (such as Toronto-Pearson International Airport (YYZ) and others in Canada) have de-icing pads. After pushing back, the pilots will taxi over to a specially constructed pad where multiple planes can be de-iced at once. At Pearson, the glycol solutions are captured in tanks below the de-icing pad and recycled by chemical companies for use again. In the U.S., O'Hare has its own pad as a joint venture with American Airlines and United Airlines.

How much time do pilots have after anti-icing?

The key concept is called “Holdover Time” — the time from spray application of anti-icing fluid until takeoff. Guidelines published annually by the civil aviation authorities such as the FAA in the U.S. include charts for each type and brand of approved de-icing and anti-icing solution. The work comes from the SAE, an industry body.

For de-icing fluid, the holdover time generally cannot exceed 22 minutes, and it is dependent on temperature and weather. De-Icing fluid is really only meant to remove contaminants at the outset. Anti-icing, on the other hand, allows for longer periods between application and take-off, from as little as nine minutes in very cold and snowy weather to as much as 160 minutes. “Holdover times have increased over the past five years,” Herrick said.

One determinant of holdover times seems quite old-school: visibility. On a snowy day, the control tower will determine the visibility through a visual check from the tower to markers on the field. Snow reduces visibility, but the distance they can see from the control tower translates into an estimate of the amount of snow that’s falling. This estimate allows crews to understand how much snow will build up on the wings over time and therefore an acceptable holdover time.

A more modern approach is called “liquid water equivalent.” There, small heated pads distributed across the airport melt falling snow and measure the exact amount of precipitation. This allows anti-icing crews and pilots to more accurately determine for how long the Type IV product will be effective.

Holdover is calculated by Herrick and his crew by means of an app, which considers the type of aircraft (made largely of composite materials such as the Boeing 787 and Airbus A350, or aluminum like most others), temperature, the aforementioned precipitation and visibility. Composite aircraft have lower holdover times.

The pilot in command makes the call

The pilot in command — the captain of the aircraft — has the final say as to whether to depart after de-icing and/or anti-icing. He or she will communicate directly with the ground staff via radio and confirm what was deployed on the aircraft and what the holdover time will be.

“American pilots place a lot of trust in other employee groups to do their jobs with professionalism. Our de-ice group is no different. Our crews are really well trained, dedicated and they have some of the most advanced equipment available,” said Sponsler, the chief pilot at O'Hare for American Airlines.

If the holdover time is exceeded and the plane has not yet departed, the captain has a choice: return for more de-icing and anti-icing, or a visual inspection of the wings. There, the first officer will leave the flight deck and walk down the cabin to the middle of the aircraft.

“If you do decide to conduct a cabin check, it’s all about how you present it,” Sponsler said. “The captain normally makes a calm public address announcement ahead of time informing the passengers that one of us is going to be in the cabin for a moment. If you walk back to the airplane in an easygoing manner and conduct the check-in a composed manner, it goes a long way in settling any anxious passengers.”

While de-icing and anti-icing may seem like a delay to departure and extra time sitting on a cramped airplane, it’s an essential safety feature. Next time you see it happen, enjoy the car wash and wave to the operators outside in the cold.

Featured image by CQ-Roll Call, Inc via Getty Imag
Editorial disclaimer: Opinions expressed here are the author’s alone, not those of any bank, credit card issuer, airline or hotel chain, and have not been reviewed, approved or otherwise endorsed by any of these entities.