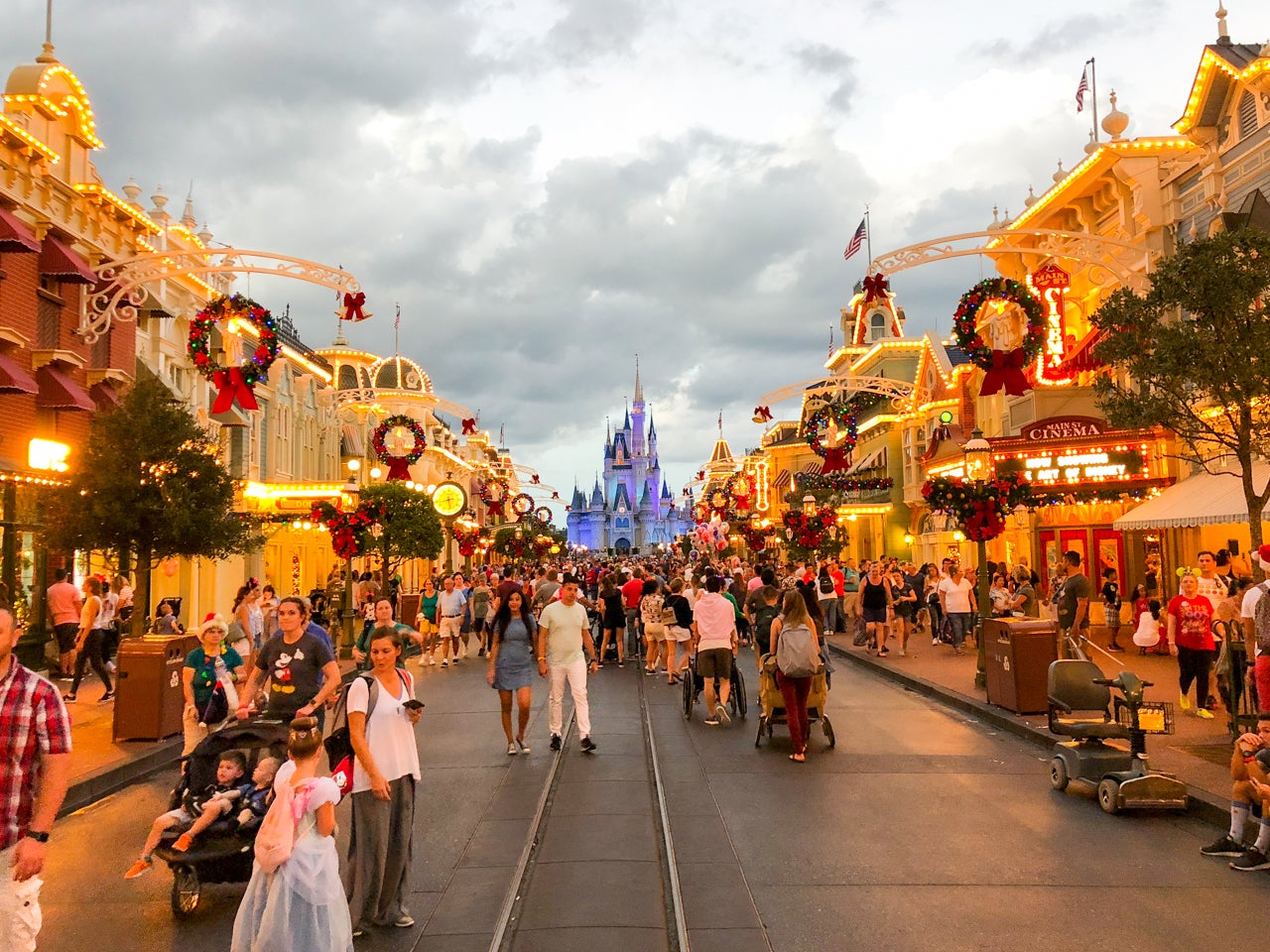 Do you like waiting 295 minutes for one ride? Idling in an interminable line just to turn into the parking lot ... only to find out the park is full and closed to new guests? Enjoy crowds as far as the eye can see? If so, we've got the vacation of your dreams all planned out.

While there are some great times to visit Disney, there are also some less magical times. While we love Disney, and especially love Disney around the holidays, you unlikely to ever find us at Disney around the week between Christmas and New Year's. Ever. Why, you might wonder? There are four reasons we'll outline below, but they all come back to unrelenting crowds.

But because lots of people make the trip during that week, we'll also add a few tips for those souls who are brave enough to try Disney at peak capacity.

For more TPG news and travel tips delivered each morning to your inbox, sign up for our free daily newsletter.

Waits are posted in minutes, but measured in hours

Disney measures waits in minutes, but the reality is you are waiting for hours around the holidays. On Christmas Eve, the Disney app clocked the wait for Pandora: Flight of Passage in Animal Kingdom at 295 minutes. That is five minutes shy of five hours. Five hours for one two-minute ride. No thanks.

If you think that was a fluke, know that it happens pretty much every year. Last year, we saw the same wait for Slinky Dog Dash in Toy Story Land during the holiday week. We're sure waits would be at least that long for this year's newest attraction, Rise of the Resistance, were it not for the ingenious virtual boarding groups being utilized. Expect multi-hour waits for other popular attractions such as Seven Dwarfs Mine Train, Rockin Roller Coaster, Test Track, Space Mountain and more.

Thinking about a strategy where you just focus on the less popular rides? You won't find much more joy there. That iconic ball in front of EPCOT, Spaceship Earth that's usually a 10- or 15-minute wait? Try 90 minutes on New Year's Day. Haunted Mansion in the Magic Kingdom consistently had waits of 100 minutes or more. And, DINOSAUR at Animal Kingdom, frequently an easy wait, topped out at over a two-hour wait.

Think about bathroom breaks, food, hydration and general sanity when waiting in line for 4 hours only to wait for 2 or 3 hours for the next ride. We shudder at the thought. Even rides that are typically virtual walk ons, like Figment or Three Caballeros at Epcot, can post 60-minute waits during the holiday week, making almost every endeavor a big time commitment.

We did notice one change from last year. Now that Star Wars: Galaxy's Edge is open, the wait times at Toy Story Land were noticeably lower. Where 3+ hour waits were common for Slinky Dog Dash (and 2+ hour waits for Toy Story Mania), we consistently saw times under two hours for the rides in Toy Story Land. That could be due to crowds spreading out around a Hollywood Studios park with a lot more options. Or, it could be a continuation of folks staying away until Galaxy's Edge is in full swing.

Disney Parks may close due to capacity

Even when the Disney Parks are so full on a hot summer weekend that you aren't sure how they could fit another person in, they usually can. A Disney theme park closing due to capacity concerns isn't unheard of, but it is unusual, typically only occurring a handful of times each year. In recent years, the vast majority of the times that one of the Disney World parks closes to new guests due to capacity (usually Magic Kingdom) is during the week between Christmas and New Year's Day.

Out in California on Dec. 27, Disneyland stopped selling admission tickets to new guests.

Once again in 2019, Disney World's Magic Kingdom also closed to many new guests by midday New Year's Eve. We're sure some of the nearly 100,000 people inside Magic Kingdom when it closed were having fun, but there were plenty that probably weren't having as magical of a day as they would have liked. Depending on what you count as a ride or restaurant there are a roughly 35 rides and 30 restaurants in the Magic Kingdom. Do the math on how many people were trying to do the same thing at the same time and decide if that sounds like your idea of a magical day.

Let's assume you can get into the park, it may take a while to get there -- and that lengthy process may repeat heading back to your resort at the end of the day. During the holiday week last year, we saw many tweets about 60-minute waits for buses to get between the various resorts and parks.

Think driving yourself will help? Not necessarily. Here is the line to get into Magic Kingdom on New Year's Eve around the middle of the day. If you can snag a Minnie Van, that would have been the way to go. But realistically, that was likely to be a tall order, too.

Prepare for a total crush of humanity

Even on days where the parks don't hit absolute capacity, they are going to be very, very crowded with tens and tens of thousands of other people in each park. If the wait times for rides don't get you, being 15 rows back from the parade just might. A look at crowd calendars will usually place those dates between Christmas and New Year's Day at a 10/10 in terms of attendance. If you wait a week later in January, or go a couple weeks earlier in early December, you will find 3/10 crowd attendance days, which are infinitely more pleasant.

Tips for braving Disney during the winter holidays

We have kids, we get it: The week between Christmas and New Year's is the perfect time to get away while the kids are on school break. Let's face it, it is also a magical time of the year to be at Disney World with the decorations, extra special fireworks shows, seasonal menu items and more. So, if you do decide to brave it and go during what has to be the busiest week at Disney World, here are a few tips.

I know that is a gimme suggestion, but Disney resort properties will 100% sell out, so book while you can. If you plan well in advance, value resorts can be booked from about $200 per night. And this matters even more than normal, because if a park does close for capacity, those who are staying at a Disney Resort can still get in until the highest level of phased closure is reached (which is extremely rare).

Book a resort that is walkable to a park

You can cut a lot of hassle out of the equation if you can walk (or monorail) from your resort into at least one park. I'm a huge fan of the monorail resorts like Contemporary and Polynesian for this reason. The Skyliner gondolas are now also a realistic option to Epcot and Hollywood Studios from resorts such as the new Riviera Resort, Caribbean Beach and the Art of Animation. If ever there were a time to splurge on convenience, it has to be when park attendance is at its peak.

Those folks waiting 295 minutes for one ride, they didn't have a FastPass+ reservation. Don't be like that. In fact, with some strategy, you can still ride a heck of a lot of rides if you wanted to, even during the winter holiday week. One person who attempted the "Ride all the Rides at Disney" challenge on Dec. 30 in 2019 rode 40 rides across all four parks without any VIP access by being extremely strategic and taking full advantage of the long park hours. Turn to a site like Touring Plans if you aren't sure where to start with ride strategy.

We rode 41 rides on a weekday in September with low crowds on a similar challenge, so that is very admirable (and slightly crazy).

When strategy fails you, we recommend skipping the rides that have 200+ minute waits unless you have a FastPass. If this is your once-in-a-lifetime chance to ride the ride of your dreams and a three, four, or five-hour wait is the only option, go for it if you dare. Otherwise, we don't recommend spending hours of your day sweating it out just for one ride (and yes, you may still be sweating in Orlando with temps hitting the mid-80's in December).

Disney World during the winter holidays is pretty magical, but that week around Christmas and New Year's is not for the faint of heart. Try going in early December for much more manageable crowd levels (and lower hotel rates) or prepare for waits that truly are measured in hours at almost every 'magical' turn.

Want to read more about maximizing a trip to Disney? Check out our other Disney guides…