Minnie Vans have finally returned: Everything to know about the easiest way to get around Disney World

Articles
Summer Hull , aka Mommy Points, ran the Mommy Points site for families who want to travel more for less using miles and points for seven years. She now heads up a variety of special projects at TPG when she isn't exploring the world with her own two girls.
Follow
July 16, 2022
•
9 min read 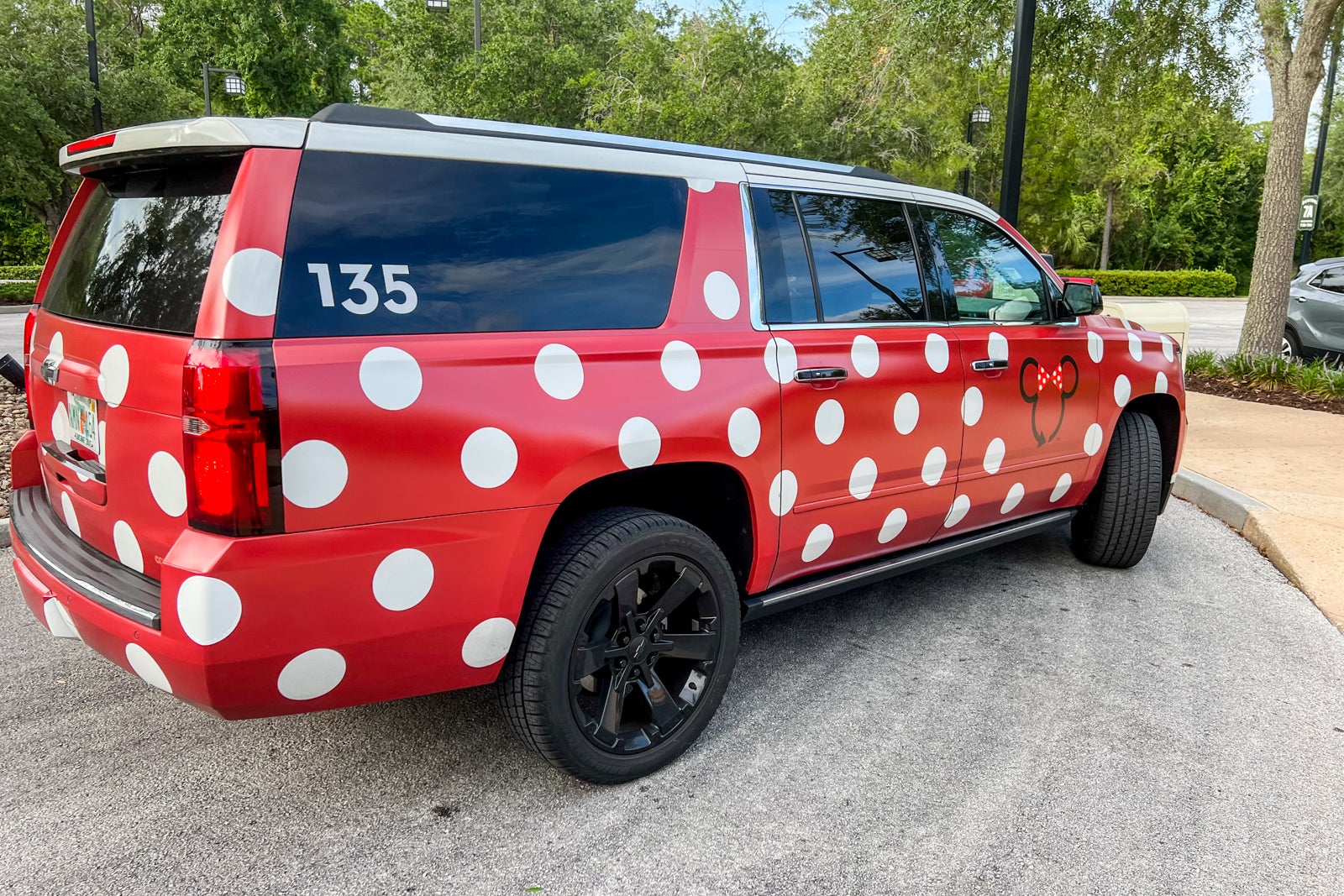 Walt Disney World is big, about equal to the size of San Francisco. To get around the property's 40-plus square miles, there’s an entire network of free Disney transportation, including buses, boats, gondolas and even a monorail.

But sometimes, you just need to get where you want to go as efficiently as possible, even if it costs a bit extra.

To that end, in 2017, Disney World introduced the Minnie Van. This is the theme park’s cutest — and handiest — service to zip you between destinations quickly and in comfort.

However, when the parks reopened after the 2020 pandemic closure, they did so without the Minnie Vans. For two years, the polka-dotted vehicles remained parked, leaving many to wonder if they would ever return.

But as of June 2022, the Minnie Vans are back and better than ever, thanks to the revamped fleet's larger, comfier Chevy Suburbans.

Here's everything you need to know about the easiest way to get around Disney World.

Driven by Disney cast members (aka Disney employees), Minnie Vans will transport you to and from almost anywhere on Disney property. Usually, they also operate to and from Orlando International Airport (MCO) and the Disney Cruise Line terminal at Port Canaveral, though these two farther destinations have not yet returned to the list of places within the Minnie Vans network.

The service is available daily, typically from 6:30 to 12:30 a.m. To request a Minnie Van, all you have to do is use the Lyft platform like you would for any other ride-hailing service. Just be sure to specifically select "Minnie Van" as the ride option in the app (and download the Lyft app in advance, if you don't already have it on your phone).

The pros of using Minnie Vans

Beyond the cute name and design, there are several reasons why you may want to book a Minnie Van.

On a recent Disney World trip, I paid for my Minnie Van trip via the Lyft app with my Chase Sapphire Reserve. As a result, I earned 10 points per dollar in the process, which is pretty awesome.

If you value your Chase Ultimate Reward points at the same rate as TPG, that's a 20% return on the money spent for the ride.

Related: Best credit cards to use for Uber and Lyft

The Suburban Minnie Vans can accommodate six people, with two forward-facing or rear-facing car seats available at no extra charge. Historically, these have been the Graco 4Ever car seats.

This is a big deal for young families, as some ride-hailing services charge extra for car seats. Not to mention, many ride-hailing vehicles are not equipped with one — let alone two.

While I can't speak from experience about the recent restart since my kids are now beyond car seats, from prior knowledge, I can say that cast members driving the Minnie Vans seem to actually know how to safely install the car seats, which is a huge help for parents.

If your family needs a Minnie Van that can accommodate a wheelchair or an electronic conveyance vehicle, the maximum capacity for those Minnie Vans is four passengers, two wheelchairs and a car seat. The process to request an accessible Minnie Van is in the Lyft app. All you have to do is select "Access Minnie Van" (short for accessible) when requesting a Minnie Van. In my tests, you need to scroll down the page to find that accessible option.

Related: How I saved hundreds of dollars at Disney by renting Disney Vacation Club points

Some locations only accessible to Minnie Vans are available

Minnie Vans are best used when they will save you a significant amount of time over Disney transportation.

Because Minnie Vans can access areas at Disney resorts that traditional cabs or ride-hailing services can't, you'll enjoy much closer pickup and drop-off points if you reserve a Minnie Van.

A perfect example of this is at Disney’s Magic Kingdom, where Minnie Vans drop you off right in front of the park. If you arrived via a taxi or a regular vehicle from Lyft or Uber, you would be dropped off farther away at the Transportation and Ticketing Center, which requires hopping on the monorail to get to the park.

Similarly, you and your family can use a Minnie Van to check out the recently returned Hoop-Dee-Doo Musical Revue, which takes place at Disney's Fort Wilderness Resort. Since getting to this property is normally a major pain, as it requires you to either take a boat from the Magic Kingdom or the Disney bus and transfer to an internal Fort Wilderness bus, opting for a Minnie Van will bring you right to the show, saving you valuable time.

Know too that you can order a Minnie Van to get you to and from specific accommodations within a resort. This is a tremendous help, as it keeps you from schlepping a quarter-mile or more to where other pickups tend to be located.

The cons of using Minnie Vans

Like many things in life, there are some drawbacks to reserving Minnie Vans.

It can take some time for a Minnie Van to arrive

While magic and pixie dust may be a thing at Disney World, you shouldn’t expect a Minnie Van to magically appear the second after you order one.

There are a limited number of these Disney-owned and -operated vehicles available at any given time, so you can find yourself waiting awhile, especially during peak times like when a park is closing. In my recent tests, it took 20 minutes at times for a ride to show, which is a bit longer on average than what I experienced before the pandemic.

My best advice is to plan ahead and avoid using this service when you're in a huge rush. Take the time spent waiting to watch passing parkgoers or bond with others in your party.

Prices are high when compared to other transportation options

Generally speaking, Minnie Vans are a Disney World luxury splurge similar to staying at a Deluxe resort or treating yourself to a VIP experience. That means you'll want to brace yourself for a little sticker shock.

Minnie Vans absolutely add a bit of extra magic to your day — but at a real cost. Expect to shell out anywhere between $30 and $50 per ride (excluding tip), based on our recent tests.

While you'll want to use them in moderation so you don't blow too much of your Disney budget on transportation, know that the high fees are partially justified by the service you receive. You're chauffeured from point A to point B by real Disney cast members who are knowledgeable, professional and occasionally have their own ways of making your day extra special.

For example, a couple of years ago, my kiddo told our Minnie Van driver about how storms in the area shut down the Everest ride at Animal Kingdom before we could use our (then) FastPasses. Our Minnie Van driver then treated us to extra FastPasses to use on a different ride the next day. That special touch would not have happened on a Disney bus or a regular Lyft.

There are also phone chargers in the Minnie Vans and great air conditioning systems that are already cranked up and ready to go. We’ve even had a Minnie Van stop at the on-property McDonald’s during one ride.

I'm beyond thrilled Minnie Vans are finally back.

When you can't take that one extra step after walking 10-plus miles around one (or more) parks in a day, these cute rides are the perfect solution to your Disney transportation problems.

Sure, they're pricey at two to three times the cost of a regular Lyft, but when you use them strategically and selectively, they can make all the difference.

To put it another way, it's like a taste of the Disney VIP lifestyle with a digestible price tag.