Weekend cruises: How to find 2- and 3-night getaways

Articles
Erica Silverstein is a travel editor for TPG, with a focus on cruise travel. A longtime editor at Cruise Critic, Erica has also written for The Washington Post, Fodor’s and Let’s Go travel guides, and numerous print and online cruise publications.
April 08, 2022
•
9 min read 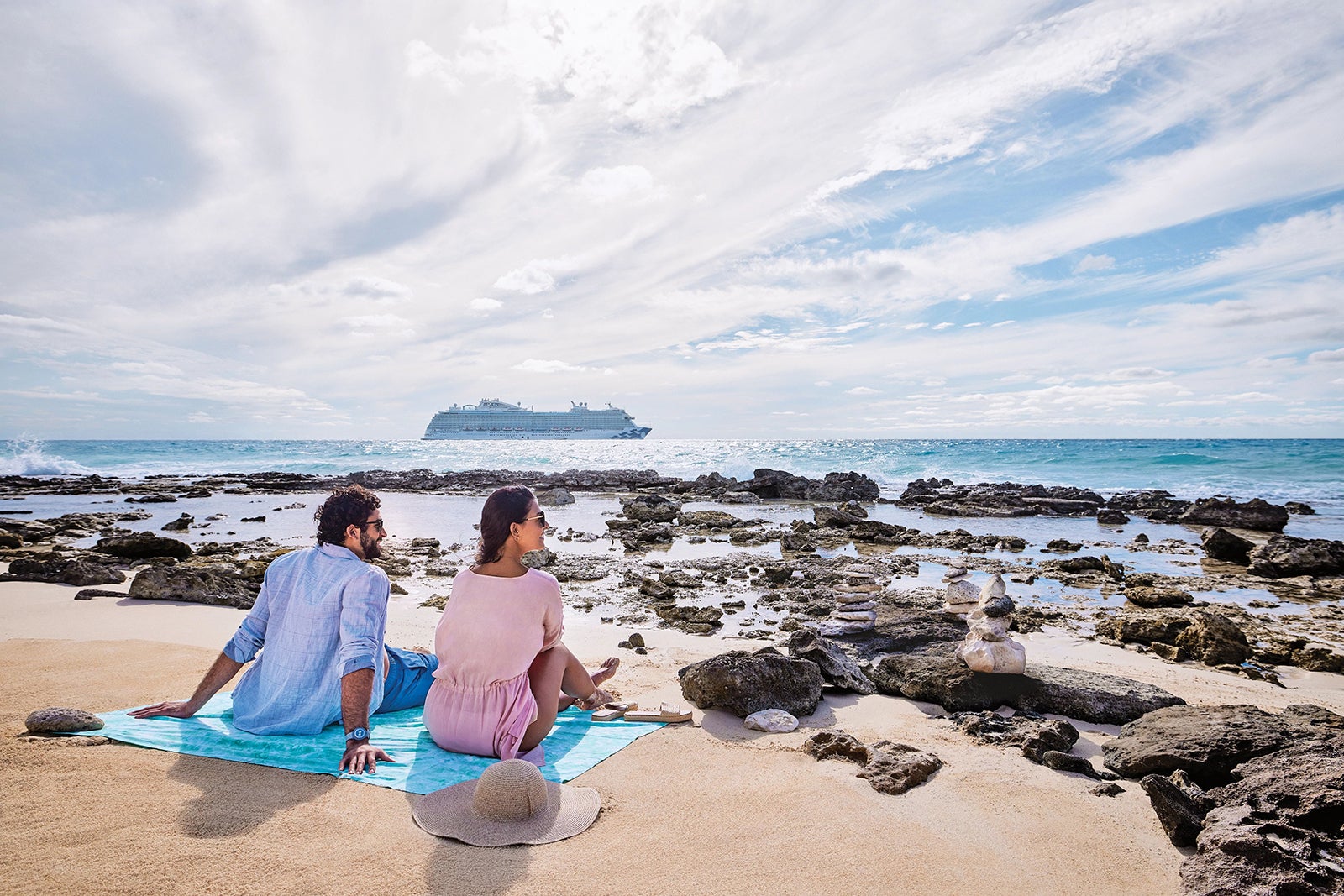 Weekend trips let you get away without missing too much work or school — but what if your preferred escape is a cruise? I’m here to tell you that weekend cruises are a real thing and can be a wonderful way of getting your ship fix when you’re short on time.

The days of the two-night cruise to nowhere are gone, but two- and three-night weekend cruises still exist from ports ranging from Miami to Los Angeles. Read on to learn who sails these short getaways, where you can go and how much that weekend jaunt to the Bahamas is going to cost you.

If you’re looking to hop a ship for a few nights, you can’t just sail from anywhere to anywhere. It’s not like booking a hotel. Thanks to the complicated Passenger Vessel Services Act, foreign-flagged cruise ships cannot leave port, sail in circles with their casinos, shops and spas open, then return back to port two nights later. Nor can they hop from one U.S. city to another. Ships need to call in another country before heading back – which limits where you can sail on a weekend cruise.

The most popular weekend cruises sail from Miami, Port Canaveral or Palm Beach in Florida, to the Bahamas, with one or two stops in Nassau, Freeport or the cruise line’s private island. Consider it a quick dash to the beach — ironic because you have to get to a warm-weather, coastal area to meet your ship in the first place.

On the Pacific Coast, weekend cruises from Los Angeles, San Diego or Long Beach in California (near Los Angeles) head to Ensenada, Mexico for a quick getaway. Farther north, you might find a short repositioning sailing between Seattle or San Francisco and Vancouver, British Columbia at the beginning or end of the Alaska cruise season.

Weekend cruises from New York or other East Coast ports like Boston or Baltimore don’t really exist because two or three nights is not enough time to get to Canada, Bermuda or the Bahamas and back again.

Related: Caribbean vs. Bahamas cruises: Which itinerary will I like more?

The other key thing to understand is a weekend cruise will typically require some time off work or missed school. That’s because most cruise ships board in the afternoon and depart in the early evening then return to port in the morning. You can’t punch out of work at 5 p.m. on Friday, hop aboard a ship and return Sunday night.

The most likely scenario is that you’ll arrive at your ship Friday afternoon for a three-night cruise, which will deliver you back to port on Monday morning. Depending on your working hours, you might need to take a half day off on Friday and arrive late to work on Monday. If you’ve got a flexible schedule or Fridays off — no problem. A few lines offer Thursday or Saturday departures for three-night cruises, but they’re rare and would require more missed school or work.

Two-nighters are rare in the weekend cruise world but do exist. The key line for cruisers short on time is Bahamas Paradise Cruise Line (come late April, it will transition into Margaritaville at Sea).

This line sails exclusively two-night cruises back and forth between West Palm Beach, Florida, and Freeport, Bahamas. Depending on the week, you could depart on a Friday, spend Saturday on Grand Bahama Island and come home Sunday. Or, leave Saturday, beach it up Sunday and return Monday morning.

You can count on Bahamas Paradise/Margaritaville at Sea for a quick weekend cruise fix, but that’s a one-ship cruise line sailing an older, refurbished ship. From the major cruise lines, most of the big-ship lines offer a consistent schedule of three-night cruises. The higher-end, luxury lines rarely offer a sailing that short.

You can count on those lines to offer entire seasons of short sailings. A few other lines, such as Holland America or Princess Cruises, will offer the occasional repositioning sailing along the Pacific Coast between San Francisco or Seattle and Vancouver. Sometimes those short cruises will fall over a weekend, allowing you that quick getaway without missing work.

Cheap weekend cruises are not hard to find; three-night sailings are among the most affordable cruises you can buy, both because you’re not on board all that long, and because cruise lines often put older ships without the latest wow-factor attractions on these routes.

I’m currently seeing three-night Bahamas cruises from $129 per person, based on two people sharing an inside (windowless) cabin. That breaks down to $43/night for transportation, food, accommodations and entertainment for one person ($86/night for a couple). You’ll have a hard time finding a hotel for that price, let alone lodging plus multiple meals.

Prices will vary depending on the cruise line, ship, sail date and how far in advance you’re booking. If you’re flexible on timing, look for the best weekend cruise deals and plan your getaway for those dates.

Related: 6 ways to get a deal on a cruise

Note that Disney cruises to the Bahamas or Mexico are priced much higher than other cruise lines. Pricing for a three-night Disney Mexico cruise starts just shy of $1,000 per person for an inside cabin and a three-night Bahamas cruise from $625 per person. Still, it’s cheaper than a weeklong Disney cruise.

Pros and cons of weekend cruises

Weekend cruises only work if you live within easy driving distance of a departure port. That way, you can still work half a day on Friday and simply arrive back to work a little late on Monday (assuming you’re a 9-to-5-er).

If you need to fly or drive many hours to your departure port, you’re looking at more of a long weekend with a day or two of time off from work required. However, if you have a flexible schedule or work off hours, a weekend cruise is definitely doable.

Weekend cruises have many benefits, the obvious one being they do not require missing much school or work. They’re more affordable than a longer cruise, so they can be great for folks on a budget. You can tack them onto a longer vacation in Florida or California to combine two trips into one.

These short trips are also a great way to rack up points toward elite status on your favorite cruise line, especially if you book a suite that earns you extra points.

Related: Short cruises are cheaper, but are they right for you?

The drawbacks are the lack of choice in destination and cruise line. You won’t be able to try every restaurant or attraction on board your cruise ship because you simply won’t have enough time.

If you party hard, get sunburned or wear yourself out with lots of active shore excursions, you might come home exhausted instead of well rested and not ready to return to the office on Monday.

Weekend cruises also have a reputation for being party cruises. The last time I sailed on a three-night cruise, I met lots of ladies on bachelorette party getaways, and the nightclub, bars and karaoke were hopping each evening — more so than on longer cruises. If you’re looking for a more sedate atmosphere, a longer cruise might be more your speed.

Weekend cruises are a fun way to get your ship fix without taking a full vacation or breaking the bank. They make more sense if you live within an hour or two of your cruise ship’s departure port, but it can still be worth taking a long weekend for a three-day cruise even if you have to build in some travel time.

However, if you love cruising so much that you might have a hard time leaving a ship after just a few nights, you might want to skip the weekend sailing and save up for a weeklong cruise instead.

Featured image by Gabe Nivera
Editorial disclaimer: Opinions expressed here are the author’s alone, not those of any bank, credit card issuer, airline or hotel chain, and have not been reviewed, approved or otherwise endorsed by any of these entities.

Our points-obsessed staff uses a plethora of credit cards on a daily basis. If anyone on our team wouldn’t recommend it to a friend or a family member, we wouldn’t recommend it on The Points Guy either. Our opinions are our own, and have not been reviewed, approved, or endorsed by our advertising partners.
See all best card offers
Related stories
News
President Biden targeting fees in big consumer push on travel and credit cards
News
Chase Sapphire cardholders: Earn up to 10 points per dollar with Peloton
News
Reminder: Big changes to who can access Delta Sky Clubs start Thursday
News
It's back! Iconic luxury cruise brand Crystal to restart sailings in July