Washington Dulles vs. Reagan National: Which airport should I use?

Articles
Ethan Steinberg has been a frequent flier for as long as he can remember. He went from studying abroad in Paris to moving to Shanghai after graduating college, where he covered all things travel in the Asia-Pacific region for TPG.
Oct. 05, 2019
•
11 min read 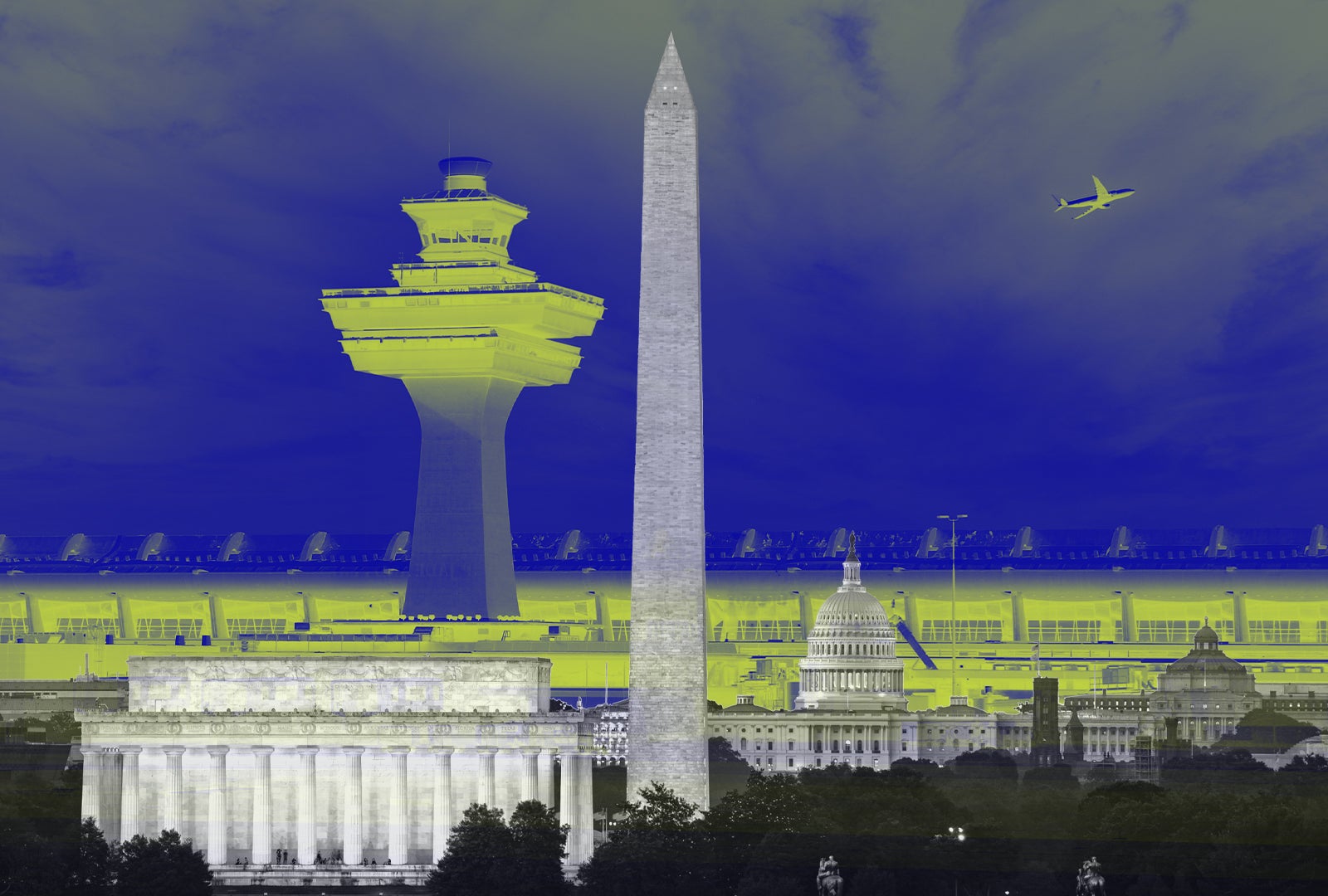 Washington, D.C., the nation's fast-growing capital, is now the sixth-largest metro area in the United States. For travelers, it's home to two major airports: Washington-Dulles International Airport and Reagan National. We're going to look at everything you need to know to decide which airport to use on your next trip to D.C.

It's worth noting that the Washington metro area also has access to Baltimore/Washington International Airport, but some in the region find it harder to get to since driving requires you to gamble with the traffic on I-95 or the often-congested Baltimore-Washington Parkway. BWI Airport does have rail service from D.C.'s Union Station, though it requires a bus transfer once arriving to the BWI station.

This comparison will look only at Dulles and Reagan National.

Distance to downtown and transportation options

The White House is in downtown Washington and is one of the most well-known addresses in the country: 1600 Pennsylvania Avenue, NW. If you're visiting one of D.C.'s other distinct neighborhoods, such as Georgetown, Capitol Hill, Dupont Circle or Adam's Morgan, you won't be more than 15 or 20 minutes away from The White House.

One of the biggest benefits of Reagan National (DCA) is its proximity to the city, only about four miles as compared to 27 miles to Dulles (IAD).

Traffic can be a hindrance getting in and out of Reagan National, especially with some heavy construction projects underway in the area near Terminal B/C. Rush-hour traffic is likely as you merge onto the George Washington Parkway, but if your flight arrives or departs in the middle of the day, it's usually smooth sailing.

With no traffic, it's possible to make it from Reagan National to the White House in 10 to 15 minutes. Reagan National Airport has its own Metro rail stop. With D.C.'s Metro system, you can access most of the tourist sites and government offices downtown via the Blue Line, while Yellow Line service will take you to Chinatown, the Convention Center and neighborhoods such as Shaw, U Street and Columbia Heights. You can connect to other lines for access to more of the region.

Dulles is hit or miss when it comes to traffic. Most people driving to the airport will take the Dulles Toll Road, which has light traffic most of the time for the stretch running between Tysons Corner and the airport itself. However, the portion of the Dulles Toll Road that runs between Tysons Corner and Interstate 66 – a main artery into downtown Washington – can be busy during rush hour, especially headed into the city. It's also worth noting that the Toll Road is actually free of charge for drivers going to or from the airport.

Even if the roads are clear, it takes time to drive nearly 30 miles into the city. Budget at least 45 minutes to make the trip from downtown. I grew up in the D.C. area and have heard talk of building Metro access out to Dulles for as long as I've been alive. We inched closer to a Metro connection in 2014 with the opening of the Silver Line, which will one day extend to Dulles. The extension to Dulles is largely built, and could open as soon as the second half of 2020 — though doubts remain about whether that schedule will hold. For now, you need to take the Silver Line express bus to the Wiehle-Reston station before you can hop on a train downtown.

Winner: Reagan National's proximity to downtown D.C. doesn't just produce an easier commute, it also gives you some breathtaking views when landing and taking off from the airport.

With four long runways, Dulles is D.C.'s hub for international travel and a major hub of United Airlines. United operates more than 240 daily flights out of Dulles, including nonstop flights to 17 international destinations (15 in Europe and two in Asia). United's longest flights out of D.C. include nonstop service to Tokyo (the flight currently operates to Narita but will switch to Haneda in the spring), Beijing and Tel Aviv.

Dulles is served by a number of international airlines, including the following (as of October 2019):

Since the 1960s, Reagan National has been subject to a so-called "perimeter rule" (as TPG's Ben Mutzabaugh reported for USA Today), limiting the distance of flights in and out of the airport. This rule was passed to encourage long-haul traffic to grow out of Dulles instead, and has since been expanded from its original 650-mile limit to 1,250 miles. With that limit, most of the flights in and out of Reagan serve the East Coast and the middle of the country, though Congress has passed multiple exemptions allowing for nonstop service to Los Angeles (on Delta, Alaska and American), Seattle (Alaska), San Francisco (Alaska and United), Phoenix (American), Salt Lake City (Delta) and a few other destinations. In fact, D.C. planespotters keep a close eye out for the small handful of 757s flying each day on some of these transcontinental routes, as they're the largest aircraft "native" to Reagan National Airport.

The largest airlines at National are American Airlines and Southwest, with Delta, United, Alaska and JetBlue operating a smaller number of flights each day. American Airlines operates a hub at DCA, and flies mostly mainline jets from DCA to its other hubs. Overall, more than half of its flights at DCA are operated by regional affiliate American Eagle. United also has a large regional presence at DCA, with more than half of its flights there operated by United Express affiliates.

Although the name is "National" airport not international airport, you'll also find a few daily flights to Canada and the Caribbean, operated by American Airlines, Air Canada and JetBlue. There are no CBP facilities for travelers arriving to National Airport, but flights from airports with “Pre-Clearance” can operate to DCA as long as they are within the “perimeter.”

Winner: Although I have a huge preference for Reagan National, most domestic flights of four hours or more require making the trek out to Dulles. And with Emirates on one end and ANA on the other, Dulles' wingspan covers much more of the globe than National's.

United neglected its Dulles hub for a long time, but the airline appears to be changing course. The airline has opened five of its nine planned Polaris lounges in the U.S., and Washington Dulles is the next airport up on the list. Dulles is the only lounge currently listed as "under construction" on United's Polaris tracker, and TPG's Zach Honig reported in July that the club is expected to to open in 2020.

You'll find lounges at Dulles operated by many of the European airlines flying there, including Lufthansa, Air France KLM, Virgin Atlantic, British Airways and Turkish Airlines. All of the lounges mentioned above are accessible with a Priority Pass Select membership (except for the Lufthansa lounge) and some, like the Turkish Airways lounge, even allow you to board your plane directly from the lounge for select flights.

For all of this investment in the passenger experience, which includes a $1.4-billion train system connecting the different concourses, many passengers flying through Dulles still have to use the antiquated people movers, often referred to as "moon buggies" by locals. The airport calls them "mobile lounges."

Although Reagan is a smaller airport, it's a perfectly pleasant place to pass the time before your flight. The airport has good dining options both before and after security. I generally find security wait times to be short. It's easy to see how long the lines are so there are no surprises if you stop to get food first. Reagan is home to two Priority Pass restaurants: The American Tap Room in Terminal C and the Bracket Room in Terminal B. Priority Pass members get $28 off their bill at either restaurant, but check which card issued your membership because Amex recently cut restaurants from its Priority Pass benefit.

Still, my favorite part of Reagan National has got to be the views. Whether you take the scenic river approach to Runway 1 or land on Runway 19, with the pilots manually making the last set of steep turns to avoid the Pentagon's restricted airspace, you're sure to get some killer views either way. Be sure to pick a window seat for flights to and from Reagan. If you're like me, you'll even check Flightradar24 before your flight to try to guess which side of the plane will offer better views based on prevailing traffic patterns.

Winner: As you would expect from a major international airport, Dulles has more in the way of creature comforts and easily accessible lounges where you can relax before your flight.

Landing at Reagan National is how I know I'm home. My heart tends to skip a beat as the familiar D.C. monuments come into view beyond the sweeping view of the Potomac River and the Tidal Basin.

Dulles is good for what it is, and — for those with access — the addition of a Polaris lounge will make it a much more attractive option in the future. It's a sprawling airport and not entirely convenient for short domestic flights, but the combination of slot restrictions and "perimeter restrictions" at Reagan National Airport often make Dulles a necessity. I'll admit that Dulles is starting to grow on me now that I have a Priority Pass membership, but it's also one of the few major airports in the world not connected to the city it serves by a metro system. Once D.C. finishes building the Silver Line to make it easier to get to Dulles, it'll be much easier to convince me to fly out of there instead.