Articles
Ethan Steinberg has been a frequent flier for as long as he can remember. He went from studying abroad in Paris to moving to Shanghai after graduating college, where he covered all things travel in the Asia-Pacific region for TPG.
Feb. 28, 2020
•
9 min read 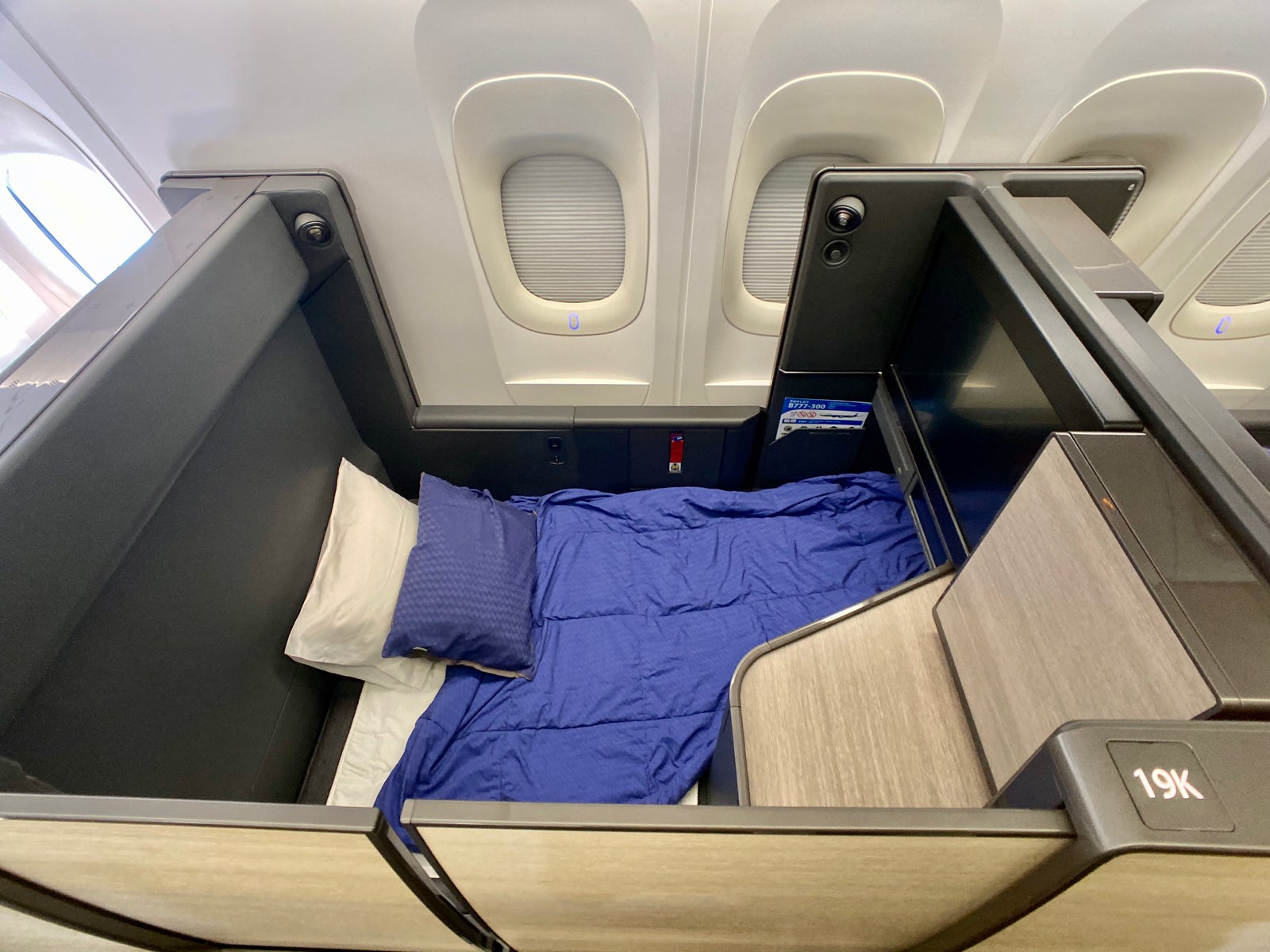 If you're tall, flying business class can really make a difference in how comfortable you are in the air. But some business-class seats offer more length and width than others, so today we're going to look at which biz class offers tall passengers the room they crave.

More and more airlines are creating business-class products like Qatar's Qsuite or ANA's new "The Room" business class, but most buy one of several common models of business-class seat and simply customize the color and finishes. This means you'll find seats with identical "bones" across many different airlines. Of course, little details can make or break an otherwise good seat, like how much spacing the airline decides to leave between rows, or whether an armrest retracts to give you more room.

Let's start by taking a look at the big three legacy airlines in the U.S. and their flagship business-class products. For United, that would mean Polaris aboard the Boeing 777-300ER. For American it's Flagship business class, also aboard the 777-300ER. And for Delta it's Delta One Suites on the Airbus A350.

You can see immediately that United Polaris has the longest beds, though passengers of all heights should go out of their way to pick a bulkhead seat with a larger footwell (you'll also have somewhere to store all the different pieces of Saks Fifth Avenue bedding United gives business-class passengers). I'm only 5 feet 7 inches tall, but I can tell the Polaris seat is spacious, with plenty of room to stretch out in all directions whether it's upright or in bed mode.

By the numbers, Delta One Suites would take second place in both bed length and width, edging out American Airlines' 777. However, when I flew Delta One Suites on the A350, I found the footwell narrow. This might cause some passengers to curl up or angle themselves while sleeping, which can eat into the minimal extra width the seat offers.

American Airlines is actually the only one of the three legacy U.S. carriers to use an "off the rack" seat for its Flagship business class; both Delta and United use exclusive, proprietary seats. The Safran Cirrus seat that American uses is a popular choice among airlines around the world, including Cathay Pacific and EVA Air. Although it is technically an inch or two narrower than what you'll find on Delta or United, the wide plastic shell around the seat (combined with a retractable armrest on the aisle side) gives you a lot more room to stretch out within your pod.

I'm not sure most passengers would be able to notice a one-inch difference in bed length, but the open and spacious footwell should more than make up for it.

Among international airlines, two are widely recognized as having the best business-class hard products on the market. The first would be Qatar Airways, whose signature Qsuite generated a lot of interest when it launched a few years back and still ranks among the best. It won back-to-back 2018 and 2019 TPG Awards for best international biz class.

You'll find a number of different configurations in the Qsuite cabin, including rear-facing window seats and "honeymoon" seats in the center of the cabin, which can be combined with the row across from them to form a quad-seat cubicle. No matter what seat you're flying in, you can expect it to be 21.5 inches wide and to recline into a 79-inch bed. As much room as you have in your private suite, I've heard some people complain that the seat itself feels (and definitely looks) rather narrow for business class:

Which brings us to the second, newer business-class seat, ANA's The Room, which is only available on select 777-300ERs flying between Tokyo Haneda (HND) and Tokyo Narita (NRT) and London (LHR) and New York (JFK), with Frankfurt (FRA) to follow soon. Unlike Qatar, ANA didn't hype its new biz class before it launched, instead giving passengers just a few weeks of warning before it unveiled what TPG's Zach Griff called "the new gold standard" for international business class.

With a whopping 64 seats, The Room takes up more than half of the plane's length, stretching from right behind ANA's redesigned first-class cabin (The Suite) all the way to behind the wings. The 76-inch bed length is a tad shorter than average, but with 35-inch-wide seats, this business-class product can compete head to head with Cathay Pacific first class for the sheer amount of space it offers.

One of the most innovative parts of the seat is the way the bed extends all the way out to the console, taking full advantage of the interior space and not leaving any gaps. You could practically sleep sideways here, or at the very least sleep diagonally to enjoy much more room than the officially stated 76-inch length.

Qatar and ANA have gone above and beyond with these cabins. On airlines that choose to install more conventional business-class seats, you'll generally see one of the following three categories:

There's so much variation in how airlines install these seats and what planes they use them on, that it's hard to pick a configuration that always offers the most space. For example, United and Lufthansa both use a similar forward-facing business-class seat on much of their fleet (virtually all United planes that don't have the new Polaris seats). As you can see in the Seatguru maps below, United lines the seats up next to each other while Lufthansa angles them toward each other, cutting into the seat width even on the larger 747.

Numbers don't always paint the whole picture, so we asked our taller TPG readers to weigh in on the business-class seats they find the most comfortable.

Brett M., at 6 feet 7 inches, loves ANA's older 777 business-class configuration, even though SeatGuru lists the pitch at only 62 inches. One thing the product definitely has going for it is roomy footwells that make it easy to stretch out.

Sometimes, a simple seat can be more comfortable than a glamorous suite. Simon B. said that in his experience, Air China's business class on the Airbus A330 could hold a seven-foot person easily. At 6 feet 3 inches, Simon was barely able to reach the footrest in this spacious forward-facing cabin.

Every airline publishes its official pitch/bed length/seat width numbers online, and sites like SeatGuru make it easy to search and compare. But those numbers only tell half the story, and you'll have to account for other factors like the size of the footwell and how much room there is to the side of the seat when making your choice. Ultimately any business-class seat is going to provide a decent amount of room, but if you're tall and looking to get comfortable on your next trip, you might want to start with some of the products described above.