The Wizard of OZ: Asiana (A380) in Business Class From New York to Seoul

Articles
Samantha Rosen was one of the first 20 employees at TPG. She started as the site's first full-time social media editor and also served as its lifestyle editor.
Follow
Sept. 28, 2018
•
11 min read 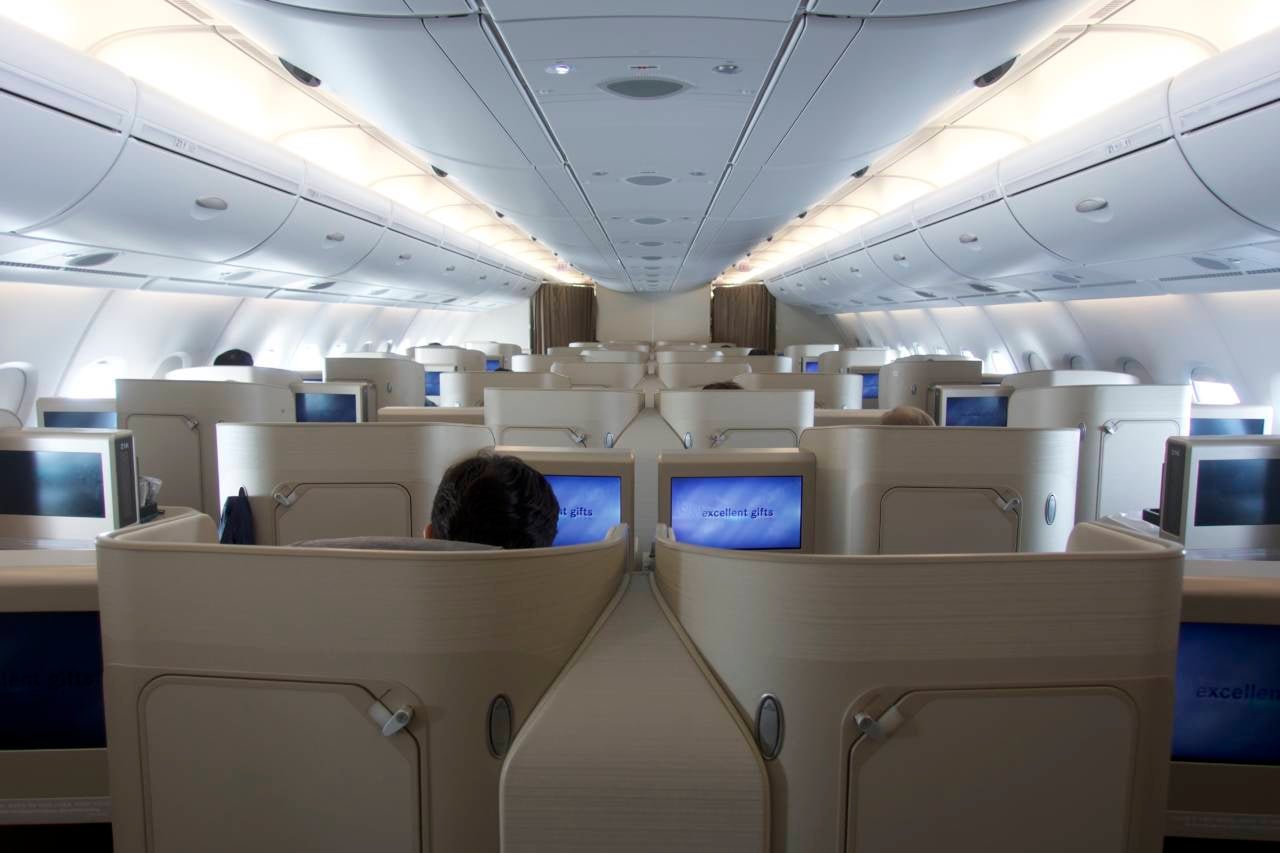 Call me the "Wizard of OZ," because I just flew Asiana (OZ)'s A380 in business class. Not only that: It was the longest flight I'd ever flown at the time — 14 hours and 35 minutes, to be exact.

Korean Air typically gets much of the fanfare surrounding Korean airlines — TPG's Zach Honig had a memorable experience when he flew it last year — but we wanted to see how Asiana's business class measured up, so I donned my ruby slippers and booked a trip as far from Kansas as you can get, flying the A380 in business from New York-JFK to Incheon Airport (ICN) near Seoul, South Korea.

Let's take a little trip down the yellow brick road, shall we?

Asiana is one of South Korea's major airlines, the other being Korean Air (or as I like to call it, the Pepsi planes airline). It's a member of Star Alliance, which also includes airlines like United, Lufthansa, Turkish and Swiss. Typically, your best bet for finding award tickets on Star Alliance carriers is to search for it through either United or Aeroplan. Thankfully, both sites were showing availability in business from NYC to Hong Kong (HKG) via Seoul (ICN) on the date I needed to travel. Now, all we had to decide was whether we wanted to burn Amex Membership Rewards (transferred at a 1:1 ratio to Aeroplan) or Chase Ultimate Rewards (transferred at a 1:1 ratio to United) for the ticket.

However, we remembered that we had purchased a whole bunch of Avianca LifeMiles through a sale that the program was offering (and continues to offer here and there). So, we decided to not even touch the stashes of Amex and Chase points and used 75,000 LifeMiles and paid $39 with The Platinum Card® from American Express in cash to purchase the transpacific flight.

I got to Kennedy Airport around 11:45am, well ahead of the 1:55pm scheduled departure time. There wasn't a line at check-in, and I was through security in a flash, even though Asiana doesn't participate in TSA PreCheck.

Asiana didn't have its own lounge at JFK but shared one with Swiss, since they're in the same alliance. Pro tip: If you don't know which lounges you have access to before a trip, download the app LoungeBuddy. It's a lifesaver.

The Swiss lounge was right past security. It was a big space but it was definitely crowded. Regardless, I felt it was a nice place to relax and grab a bite to eat before the long flight. The lounge was split up into two pretty much identical sections, with windows that overlooked the runway: prime spot for plane spotting or catching up on work. I opted for the latter.

I didn't eat anything, since I wanted to save room for the flight (more on that later), but you could carbo load, if that's your thing.

Fruits, veggies and meats were also on offer.

It's safe to say that it's nothing like I would experience just a few days later at The Pier in Hong Kong.

After about an hour or so, I headed over to the gate. On my way, something caught my eye: Why, oh why, is there a Juicy Couture in the middle of JFK Terminal 4? Oh, how the mighty have fallen.

Boarding this three-year-old Airbus A380, registration HL7634, was a bit of a mess, which seems to be the norm when it comes to international flights operated by large aircraft. Even though I got to the gate with plenty of time to spare, I was still one of the last to board. Why? Glad you asked.

The airline didn't have clearly marked lanes for business and economy passengers for boarding, so somehow I found myself right smack in the middle of the economy line. And since the A380 is a really, really big flying metal tube, that meant there were a lot of people in said line.

Once I realized where I was, I ran to the business-class line and tried to pretend that whole ordeal never happened.

On a flight that's over 14 hours long, you only have one thing in mind, no matter what cabin you're sitting in: comfort. Understandably, I was a little nervous for my first long-haul flight. I mean, what do you do for 14 hours? There are only so many movies you can watch, and I've always had a hard time sleeping on planes. Once I was on board, though, I immediately calmed down — soothing music was playing throughout the boarding process and friendly flight attendants welcomed each passenger with a smile.

Business class on Asiana's A380 was arranged in a 1-2-1 configuration — so if you're traveling with someone, you'll want to snag those two seats in the middle. The beauty of this configuration, though, was that no matter which seat you were in, you had direct aisle access. Word to the wise, though: If you're sitting in a solo window seat, aim to sit in an odd-numbered A or K seat so you have added privacy, since these seats are protected from the aisle. I didn't call ahead early enough to select my seat, so I ended up in an even-numbered seat. Rookie mistake.

I liked how big the table next to the seat was, with plenty of room for all of the things that accumulate during the flight (drinks, glasses, cellphones, lip balm, etc.). This is such an underrated amenity, especially on long flights. It's so important to have not only room but easy access to all of your essentials. The table also featured a headphone outlet and USB port.

There was also a storage bin where I put my tote bag for most of the flight.

The footwell and ottoman provided even more storage space, but since I used the bin for most of my belongings, I only used it for my shoes. I wasn't kidding when I said there was plenty of storage.

The seat was a little on the narrow side but comfortable when fully reclined. I'm about 5 feet, 7 inches, and didn't feel cramped.

The biggest con of this flight was the in-flight entertainment. Think you're going to be binge-watching movies and TV shows for 14 hours? Think again.

While the system itself was modern and responsive, there were only about 20 recent movies and four TV series. I ended up watching movies I had already seen before, since none of the others appealed to me.

The headphones also weren't the comfiest. My advice? Download movies ahead of time or bring a book with you. Or, you know, sleep.

As far as amenities, I was really happy with my L'Occitane products and fluffy slippers. Not going to lie, it felt like a little spa in the sky.

Even the amenity kit itself was L'Occitane-branded. It's a French brand, which threw me off a bit, as I was expecting a Korean brand to supply the amenities, but I wasn't complaining.

Where Asiana fell short in entertainment options, it made up for in food and beverage — which isn't that surprising, since Do & Co is the official caterer of the airline. I finally got to experience Do & Co during my first international business-class flight on Turkish Airlines a few weeks ago, so I had high expectations on Asiana. Do & Co isn't your average airline caterer; its food is some of the best in the sky.

Lunch started off with Korean-inspired bites — and wine, always wine. The flight attendants continually filled my glass of riesling, so no complaints here about that.

Then we moved on to a lobster salad, which was really tasty and fresh — so much so I almost forgot I was on a plane.

I ordered the sea bass for my entree. It tasted great, but the major pitfall was that there was so much sauce that it started to overpower the fish. It came with a side of potatoes and asparagus, and the portion of veggies was a little cold.

If you thought that's where the meal ended, you thought wrong. Next up was a cheese platter, which I admittedly only had a few bites of because I was so full.

But because dessert goes to a different place, they also brought out red velvet cake. I'm such a sucker for this, but the cake was actually really dry, so I ended up not eating much of it.

When you're flying for 14 hours, you'd better believe a good fraction of your time will be spent eating. Which brings me to dinner.

The dinner course started off with a giant portion of burrata with a pesto and balsamic drizzle. Music to my ears.

And because calories don't count in the sky, I topped it all off with mushroom cannelloni. I wished it had been a little warmer, but I guess that's what happens when you're flying the biggest commercial plane in the sky with a cabin that's 75% full. Translation: a lot of people to feed.

Last but not least, there was caramel cheesecake for dessert. I was stuffed but took one for the team and had a bite. I have a really big sweet tooth, and it was sweet even for me.

One thing of note: I couldn't find a menu anywhere at my seat, and it looked like other passengers didn't have them, either. So, flight attendants had to show each and every passenger the food options at their seats. For indecisive people like yours truly, I felt pressured and rushed to figure out what I wanted to eat.

Final verdict? It didn't quite measure up to my experience on Turkish, but overall I enjoyed the food, and I definitely didn't land with an empty stomach.

My first long-haul business-class flight — not to mention my first time on an A380! — was a success. The flight attendants were friendly and attentive, and there was plenty of room to get comfortable on this 14-hour hop.

Flying like this is always an enjoyable and relaxing experience, and now I can finally say I've spent more than half of a day on a plane. I'd definitely recommend Asiana if you're looking to get to Asia. You'll just want to bring your own entertainment options with you ... and your stretchy pants.