Looking for nature and adventure on an Alaska cruise? Choose a smaller ship 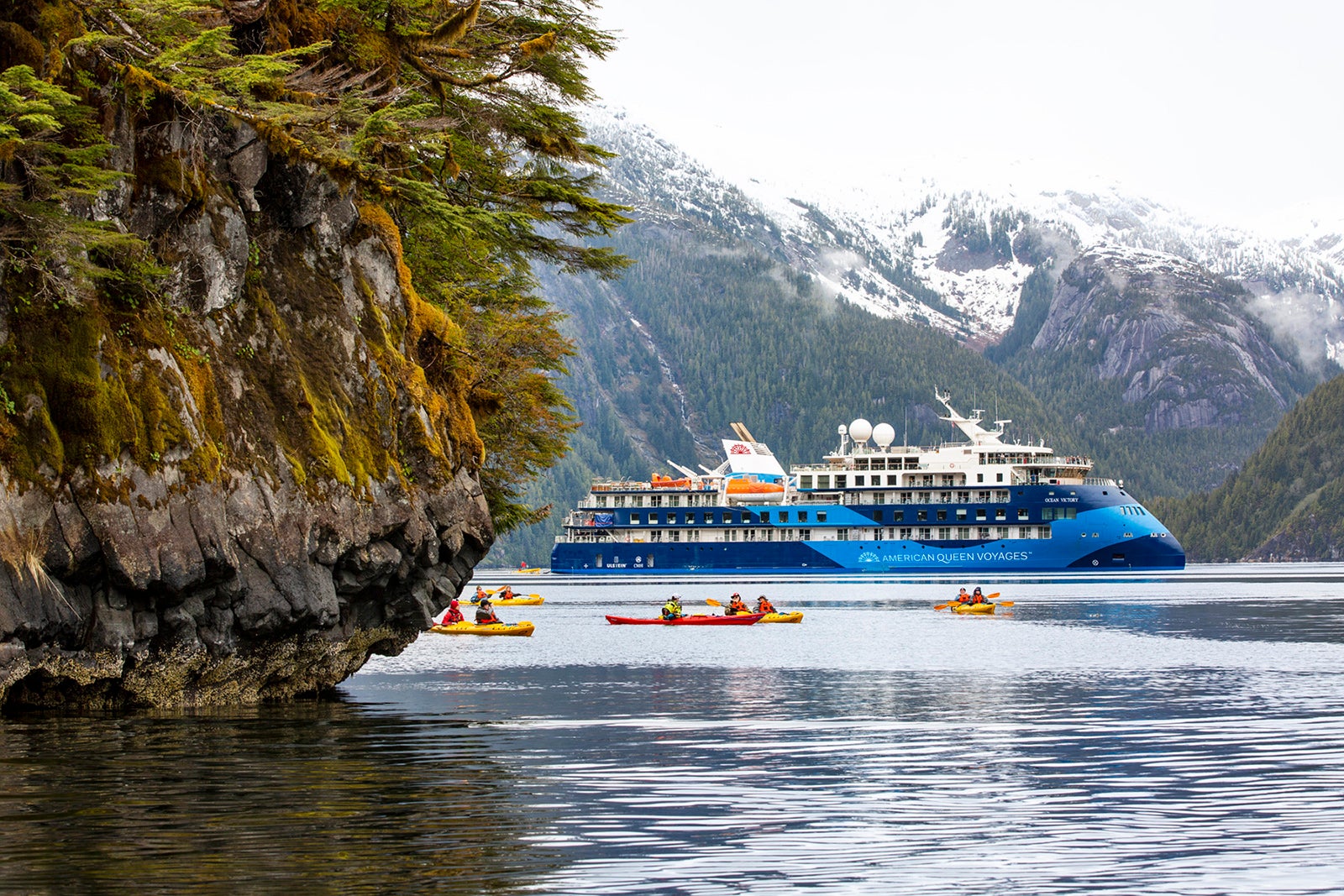 Editor’s note: TPG contributor Jeri Clausing sailed on Ocean Victory on a free trip provided by American Queen Voyages. The opinions expressed below are entirely hers and weren’t subject to review by the line.

As I rolled out of bed and looked out the sliding glass doors of my cabin to the wild coastline of one of the many remote inlets along Alaska’s Inside Passage, I pondered the big decision of the day: kayaking, a Zodiac ride or both.

There was no reason to decide before breakfast, though. The weather could change on a dime, and kayaking and Zodiac teams would be launching directly off our small ship throughout the day. Technically, we had rotating small-group departure times, but the reality was everything was flexible.

If I decided to be lazy and simply enjoy the scenery from American Queen Voyages’ new expedition ship, Ocean Victory, well, there were plenty of comfortable viewing options, both from the private balcony of my spacious cabin and public spaces throughout the 185-passenger ship.

But seriously, who wants to be lazy when you have the chance to explore such majestic surroundings up close and personal and with expert guides?

During my 10-day cruise from Vancouver, British Columbia, to Sitka, Alaska, I quickly came to appreciate the nature-oriented focus of small-ship Alaska cruising. Sure, the big cruise ships can take you around Alaska’s famous Inside Passage with opportunities for flightseeing tours, zip line adventures and locally themed salmon bakes, but if you want your days to center around the majesty of Alaska’s wilderness and to learn about native wildlife and culture, you need to seek out the smaller vessels.

Education on the water

I am attention span-challenged, meaning you’ll rarely find me enjoying or paying much attention to a lecture like those offered on traditional and adventure cruises alike. It’s a whole different game, though, when I am on the water, skimming the coastline, watching sea otters carry their young on their bellies, watching bald eagles perched for the hunt in the treetops above or navigating through huge chucks of glacial ice.

Did you know that if you pull a piece of glacial ice out of the water and kiss it, it is supposed to bring you luck? Or that many bald eagles drown because their talons are so long and hooked that if they snag a fish that is too heavy to lift from the water, they can’t release it, so they get dragged down and die? That black bears can be white and ice can be blue, and ravens can mimic everything from the sound of dripping water to babies crying, even cats meowing?

I wouldn’t have picked up these facts from a talk in a theater, but I learned them from Ocean Victory’s expert guides while floating along secluded bays in Alaska.

The expedition team catered to every level of traveler, offering short excursions for the adventure-leery and longer kayaking outings for the more experienced.

Except for one day when winds and chop canceled kayaking, the expedition team was ready to launch, rain or shine, when we were anchored alone in the wilds.

One morning we set off in a steady light rain and fog, navigating around rafts of otters, watching a family of deer on the shoreline watch us, and of course, being on the constant lookout for bears.

Unfortunately, we missed one bear spotting by just five minutes. After a leisurely kayak one sunny afternoon, while we were still shedding our boots and water-logged pants, the expedition team leader announced over the ship’s speaker that a big black bear was wandering the coast across from the boat.

As we scurried up top and grabbed binoculars, I realized the bear was right in a clearing we had passed just minutes before returning to the boat. Still, thanks to the abundance of spotting scopes and onboard binoculars (the latter found in every cabin and scattered through the ship), everyone who wanted to had an opportunity to watch the bear meander along the shoreline.

There were a few other memorable wildlife sightings throughout the week, including whales and a moose that decided to take a swim as a Zodiac passed. The expedition team members were expert spotters, and I’m sure I saw more wildlife on this trip thanks to their sharp eyes.

It wasn’t just our ship’s expedition team who introduced us to the natural wonders of this region, but the Alaskan locals we met when the ship came into port.

One of the highlights of the cruise was spending nearly four hours with Rob Schwartz and his son Teagen, who took a half-dozen of us from the port town of Petersburg, population around 3,000, to get a view of LeConte Glacier.

Related: The 6 coolest things to do on an Alaska cruise

As we boarded their 13-passenger Point Retreat jet boat, Rob Schwartz looked over at a second boat loading passengers and cast a mischievous glance my way.

“No boat gets closer to the glacier than mine,” he declared with a grin.

And he stayed true to his word.

With his son, Teagen, perched on the roof as a lookout, we spent nearly two hours navigating a dense field of breathtaking blue, white and clear icebergs, inching closer and closer to the majestic LeConte Glacier.

From the jet boat, we delighted at the sea lions piled up almost impossibly on top of each other to sunbathe on buoys that lined the port entrance. We laughed out loud as we passed one late-comer trying, unsuccessfully, to muscle his (or her) way onto the already overcrowded platform.

Not every animal sighting had a happy story, though. The lone young sea lion we saw clinging to a cliff near Petersburg was likely a scared survivor of a raft of sea lions eaten by a killer whale in the area a few days earlier, Schwartz told our group.

More importantly, our knowledgeable captain was true to his word about taking us close to the glacier. Occasionally we’d spot the second boat, forging ahead. But despite the huge chunks of ice that more than once sent us rocking, we didn’t turn around until well after the second boat had called it a day.

A comfortable home base

But the biggest lesson from my small-ship cruise was that adventure and luxury don’t have to be mutually exclusive in Alaska.

Between outings, we had gourmet meals, fine wine, even fancy hot chocolate handed to us as we got off our kayaks and Zodiacs. After spending time off the ship, I could shed my wet clothes and don a fluffy bathrobe to relax in a cabin that was spacious by even large-ship standards.

Related: The best Alaska cruise for every type of traveler

Even the ship’s large mudroom was upscale, with open-locker-style cabinets for each cabin to store rain gear and boots (provided by the ship) and lots of room and benches for suiting up.

My favorite spaces were the two large lounges with huge windows -- one on the same level as the dining room, library and theater-style reception hall, and another with a bar on the top deck -- and the sun deck, which had an infinity pool and two hot tubs. Indoors and out, I could hang out in comfortable, elegant spaces while I admired the passing scenery and scanned the shoreline for wildlife.

Who knew that a floating contemporary boutique hotel would be the perfect complement to Alaska’s great outdoors?

Featured image by Â©2022 Michel Verdure
Editorial disclaimer: Opinions expressed here are the author’s alone, not those of any bank, credit card issuer, airline or hotel chain, and have not been reviewed, approved or otherwise endorsed by any of these entities.