These Are America's 10 Largest Regional Airlines

Articles
Sid Lipsey is an award-winning travel writer based in Los Angeles. He's written for Yahoo, CNN and Fox News and his favorite travel topics are airlines, cruises, hotels, and shortcuts to LAX.
Follow
May 04, 2019
•
8 min read 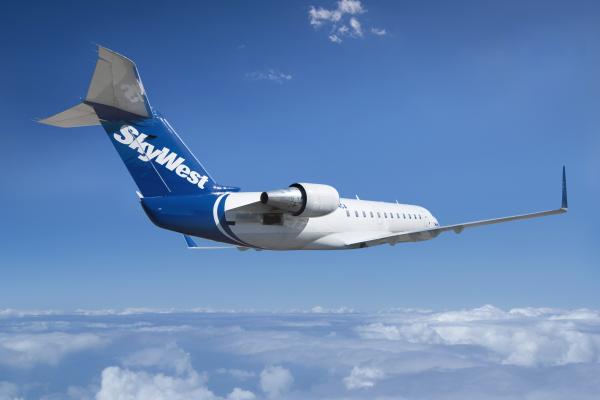 These Are America's 10 Largest Regional Airlines
This post contains references to products from one or more of our advertisers. We may receive compensation when you click on links to those products. Terms apply to the offers listed on this page. For an explanation of our Advertising Policy, visit this page.

Quick: Can you name 10 regional airlines?

The major domestic airlines are all household names (Delta, American, United, etc.), but only the most hard-core aviation fanatics can shout out the regional airlines. Yet, these are the carriers that the big airlines rely on to ferry passengers to and from areas that are too small and/or too unprofitable to service with large jets.

These regional partners — which are sometimes, but not always, independently owned — fly under the major carrier's brand name. United's regional partners fly as United Express, Delta's as Delta Connection, and American's as American Eagle. All told, more than half of the domestic flights in the US are on these small airlines (and some of them have better on-time stats than the big guys).

"Some of these carriers are actually quite large," aviation industry expert Bob Mann tells The Points Guy. He notes that a billion dollars in revenue used to be the dividing line between the major carriers and the little guys. Now, some regional airlines easily rake in that much. "They truly are very large operators," Mann says.

TPG looks at the 10 largest regional airlines (based on 2018 Department of Transportation data).

Fun Facts: SkyWest has come a long way from its humble beginnings. It was founded in 1972 with a fleet of 2-, 4- and 6-seat Piper aircraft that took passengers between Cedar City, Utah and Salt Lake City for $25. Now, SkyWest is the largest regional airline in the United States. The more than 37 million passengers it carried in 2018 place SkyWest firmly above several well-known "large" airlines, including JetBlue, Alaska, Spirit and Hawaiian Airlines.

Fun Facts: Republic traces its roots to 1973 when it was founded as Chautauqua Airlines. Also, Republic was involved with the infamous #Bumpgate incident of 2017: It was operating the United Express flight on which a passenger, Dr. David Dao, was dragged off the plane after refusing to yield his seat to an airline employee.

Fun Facts: Like many airlines, PSA has gone through numerous name changes, mergers and acquisitions since its founding in 1979 in Latrobe, Pennsylvania (original name: Vee Neal Airlines). Under the name of Jetstream International Airlines, it became a subsidiary of US Air in the late 1980s. US Air changed Jetstream's name to PSA in 1995. PSA became part of American's family during the American-US Air merger of 2013.

Fun Facts: A New Mexico husband and wife founded Mesa Airlines near an actual mesa in 1982. Since then, the airline has formed longtime relationships with the larger airlines. They've been partnering with United and American since 1992.

Fun Facts: Formerly Pinnacle Airlines, the carrier completed a painful bankruptcy with a new name (Endeavor) and a new owner (Delta) in 2013. It now bills itself as "the world's largest operator of Bombardier CRJ-900 aircraft."

Fun Facts: Envoy traces its beginnings to 1998, when several small airlines joined together to form a company called American Eagle Airlines. The company changed its name to Envoy in 2014 to avoid confusion with other regional airlines that were flying under the American Eagle name.

Fun Facts: Until recently, ExpressJet was a wholly owned subsidiary of SkyWest (the first carrier on this list). Earlier this year, SkyWest completed its sale of ExpressJet Airlines to ManaAir, which is partly owned by United Airlines.

Fun Facts: After a troubled 2017, when massive pilot shortages forced the airline to cancel hundreds of flights, Horizon is doing much better now. It turned from an $8 million loss in 2017 to a $27 million profit last year.

Fun Facts: One of the younger airlines on this list, Compass started flying in 2007 as a wholly owned subsidiary of Northwest Airlines. In 2008, Northwest was acquired by Delta, which sold Compass to its current owner, Trans States Holdings, in 2010.

Fun Facts: GoJet has a lot in common with Compass Airlines: Like Compass, GoJet is a young airline, launching in 2005. And it has the same owner as Compass — Trans States Holdings.