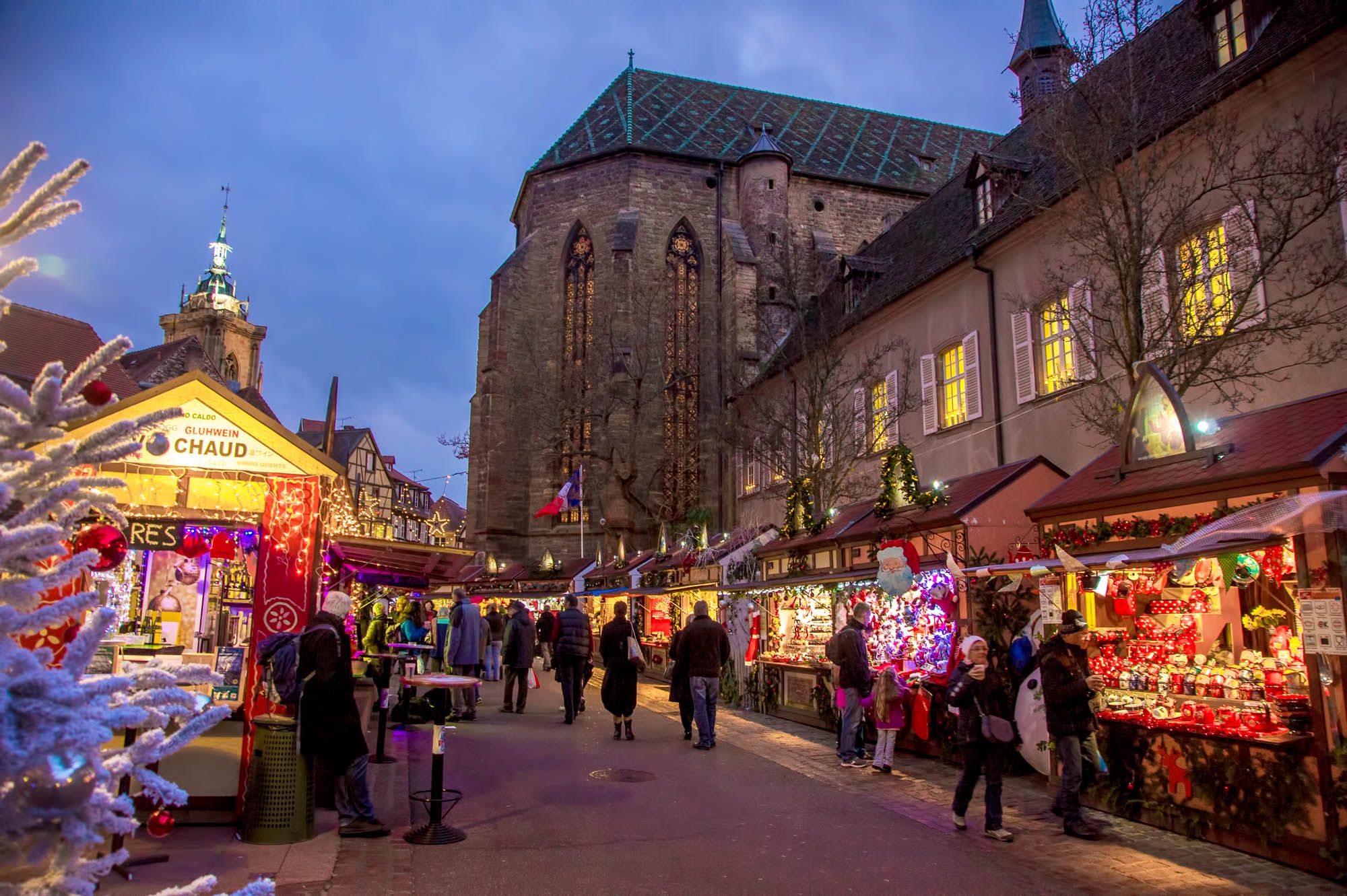 If you love Christmas (I do), November and December are a phenomenal time to visit Europe thanks to the holiday markets scattered across the continent. I've spent my last several Thanksgiving breaks testing out these Yuletide hotbeds, but the very first one my family visited continues to stick with me.

For our initial trip, we stayed away from the more mainstream locations and instead spent a week in Colmar, France. If you've never heard of this Alsatian town near the Swiss and German borders, listen up Here are six reasons why Colmar should be at the top of your holiday travel wish list.

When my wife and I travel for fun, we tend to visit larger cities with lots to do and see. Colmar is at the opposite end of the spectrum. With roughly 70,000 residents, the city feels more like a quaint, country village and the architecture and street layout only added to the charm. The city center feels like it was pulled straight from the 16th or 17th centuries and even includes its own Little Venice (La Petite Venise) at the south end of the historical district.

It's also exceedingly walkable. The main train station is centrally located and all of the sights of the old town are within a walkable mile. The Champ de Mars is a pretty stroll — especially in the evening — but the main place to be during the holiday season is the Grand Rue. Three of the six markets in the town are located along a 600-meter stretch and the architecture is absolutely stunning both during the day:

Despite the small-town feel, Colmar is still large enough to have some terrific stores — including a full-sized Monoprix for groceries and clothes. (My wife calls it the "French Target.") We also found that the majority of local residents speak decent English, a great help when we were purchasing souvenirs and shopping in the many boutiques.

2. The proximity to other Christmas markets

The other nice thing about the centrally located train station is that it makes it easy to visit other towns in the region. Colmar is in central Alsace, the easternmost region of France, and it shares a border with both Germany and Switzerland. There are several other towns that are just a short trip away, many of which have impressive Christmas markets of their own.

We took the train to Basel, Switzerland, on the opening day of its market and enjoyed great views over the Rhine River.

There was also a bus/train combination ticket to cross the Rhine and visit the markets in Freiburg, Germany, where my wife snagged this handmade German cuckoo clock that still hangs on our kitchen wall:

On our last day, we took a short 30-minute train north to Strasbourg for the opening day of its market, which claims to be the oldest in Europe (dating back to 1570 and the "Christkindelsmarik"). My daughter, Evy loved the traditional carousel next to the cathedral:

We even tacked on an extra two days at the end of our trip to enjoy the markets of Zurich (and check out the incredible Park Hyatt Zurich) — which was less than two hours away by train.

Several other towns in the area have markets as well, but if you're like us, you may be so enthralled with Colmar that you'll find it hard to leave.

Another big reason to visit Colmar is the fantastic dining throughout the city. Despite its small size, Colmar is loaded with gourmet restaurants, including three with Michelin stars. We had a wonderful lunch at L'Arpege on our first day in town and also highly recommend Restaurant Au Fer Rouge for a relaxed dinner. One of the best things about the cuisine in Colmar is the mix of influences. German staples like sauerkraut and sausage are blended with French specialties like escargot and gourmet cheese.

Of course, food is only as good as the wine it's paired with and Colmar doesn't disappoint. I was unfamiliar with Alsatian wine before our trip but I found the Pinot Blancs and Gewürztraminers of the region smooth and refreshing. This doesn't even take into account the wonderful "vin chaud" being served at Christmas market stalls throughout the town. There is no better way to beat the cold than to drop a few euros on a steaming cup of mulled red wine and we loved taking home souvenir mugs from the different markets.

5. The lack of chain hotels

Hear me out on this one. It's true that TPG is a site devoted to maximizing points and miles, but when one of my wife's best friends proposed Colmar as a potential home base to explore the Black Forest, I was kind of excited to see that the city boasts no Hiltons and no Marriotts. There is a Best Western (Le Grand Hotel Bristol) across the street from the train station and a handful of Accor-participating properties, but the rest of the hotels in the city center were small and local.

We wound up booking an apartment through Airbnb — though unfortunately before we could earn bonus points or miles on these reservations. It was a terrific decision. My wife and I (and Evy) were spending a week in Colmar, and we had two friends meeting us for part of the time. We found a fantastic, three-bedroom apartment just a block from the central Christmas market. Even if you don't need the space, I can't say enough good things about the management company (and they have several other accommodations in the city). They even provided us with a high chair and crib for Evy in the apartment.

The final appealing aspect of Colmar (and the Alsace in general) is the fact that the town's Christmas markets open much earlier than most others across the continent. My wife and I have limited vacation time each year, so traveling over Thanksgiving allows us to spend an extended time away from home but only use three vacation days in the process. The Colmar markets typically open their doors six days before Thanksgiving; this year, the start date is Friday, Nov. 22. Other markets in the area also opening prior to Thanksgiving include Mulhouse (Nov. 22), Strasbourg (Nov. 24) and Freiburg (Nov. 25).

Unfortunately, Basel's markets don't get going until Thursday, Nov. 28, this year and many others across Europe follow a similar timeline.

It was great to be able to arrive on the Saturday afternoon before Thanksgiving and already find the markets in full swing.

Colmar may be off the beaten path when it comes to its Christmas markets, but it was actually a pretty easy to get to. The nearest airport is EuroAirport Basel Mulhouse Freiburg (BSL), and though there are no nonstop flights from the U.S., you can find connections from numerous European destinations, including:

It's also served by several low-cost carriers — including dozens of flights on EasyJet.

Though the airport is in French territory, it is jointly operated by France and Switzerland, so upon arrival, be sure to follow signs for the French exit. After exiting into the French sector of the airport, you'll want to catch Distribus Line 11 to the Saint-Louis train station (2.50 euros) — which runs every 15-30 minutes as late as 11:35 p.m. during the week. From there, you can hop on a northbound train toward Strasbourg, which runs every one or two hours and will take just 35 minutes to reach Colmar (14.10 euros per person, though we were able to get a discount for traveling with Evy). It is a short taxi ride from the train station. Without luggage during out stay, it was definitely walkable.

As mentioned earlier, we spent two nights in Zurich at the end of our trip, which was just a short train ride of less than two hours (with a quick change in Basel). As a result, you could simply fly into Zurich and take the train to Colmar — especially since SWISS tends to be very good about opening up business-class award space on its nonstop flights from the U.S.

Even though it's a relatively small city, virtually all restaurants and shops readily accepted credit cards. Since the Chase Sapphire Reserve hadn't been released during my trip, I charged most of my purchases to the Chase Sapphire Preferred Card to earn bonus Ultimate Rewards points on dining and travel. You'd also want to swipe one of these or another that waives foreign transaction fees.

You may find that some of the market stalls only accept cash. As a Bank of America customer, I was found a BNP Paribas, a partner bank to BofA, a short walk from our apartment. This allowed me to avoid the $5 fee for nonpartner withdrawals, though I was still subject to a 3% international transaction fee.

The magic of the Christmas markets in Colmar is incredible. The markets of the Black Forest may be less renowned than those in larger European cities, but I'd be hard-pressed to find a more festive location in which to kick off the holiday season.